What Is "OC87" Anyway? by Bud Clayman - OC87 Recovery Diares 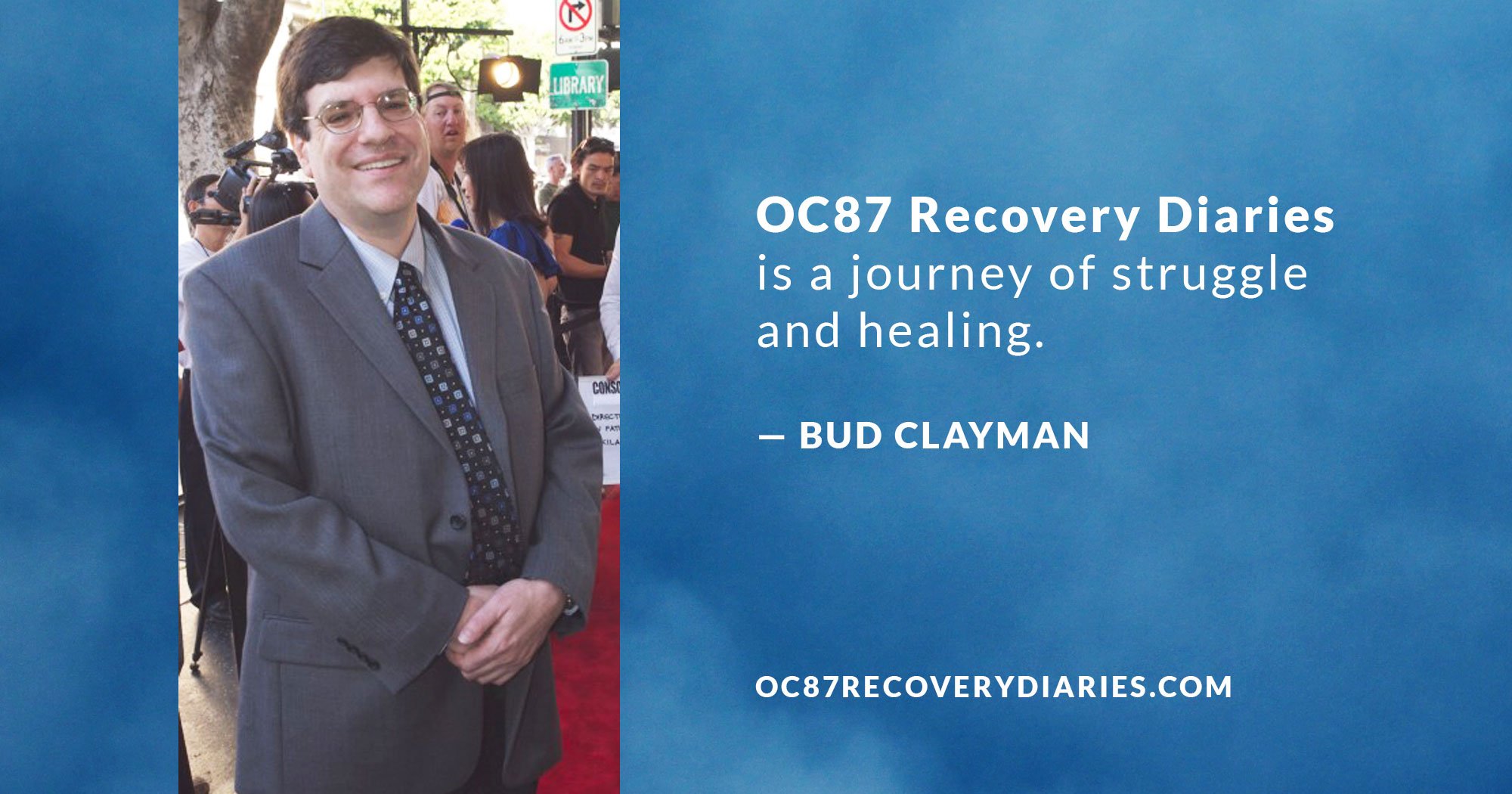 “OC87” is a term coined by one of my therapists. It refers to the year 1987: the year I wanted to control everyone and everything.

The year before, life had been significantly out of control for me. I was a freelancer in the film industry in Philadelphia. For a guy just a year-and-a-half out of college, that meant a lot of unsteady employment and a big lack of structure. This is a transitional period that most college graduates are able to weather but I have always had problems dealing with unclear situations. I get stuck and scared when a journey of mine has no clear destination. Since I have obsessive compulsive disorder and I am still trying to cope with uncertainty in life, (the core of OCD is a need for one hundred percent, absolute certainty), I was literally going crazy back in 1986.

The way I attempted to cope with this loss of structure was to force myself to take a full time job in a store that sold and rented video tapes (this was pre-internet and pre-Netflix). For me, the job was avoidance — a misdirected attempt to structure my time and life, but also an easy escape from the field that I loved: filmmaking.

Because I was out of control in my head and my mood swings fluctuated from manic to depressive (I had not been diagnosed with OCD or bipolar yet) I felt I needed to be in control and in charge of my external world. Financially, I could do this because I was self-sufficient through the graciousness of my family. Therefore, in my mind, I was in control of everything and everyone. Why? Well, it didn’t matter how I acted or behaved socially at a job. If I got fired I would get another job — all that mattered was that I believed I was in charge.

That year, 1987, later became known as Obsessive Compulsive 87; the year when I tried to control everything and everyone. Luckily, my plan never worked because, if it had, or if I had believed fully in it, I would have continued to go severely psychotic. 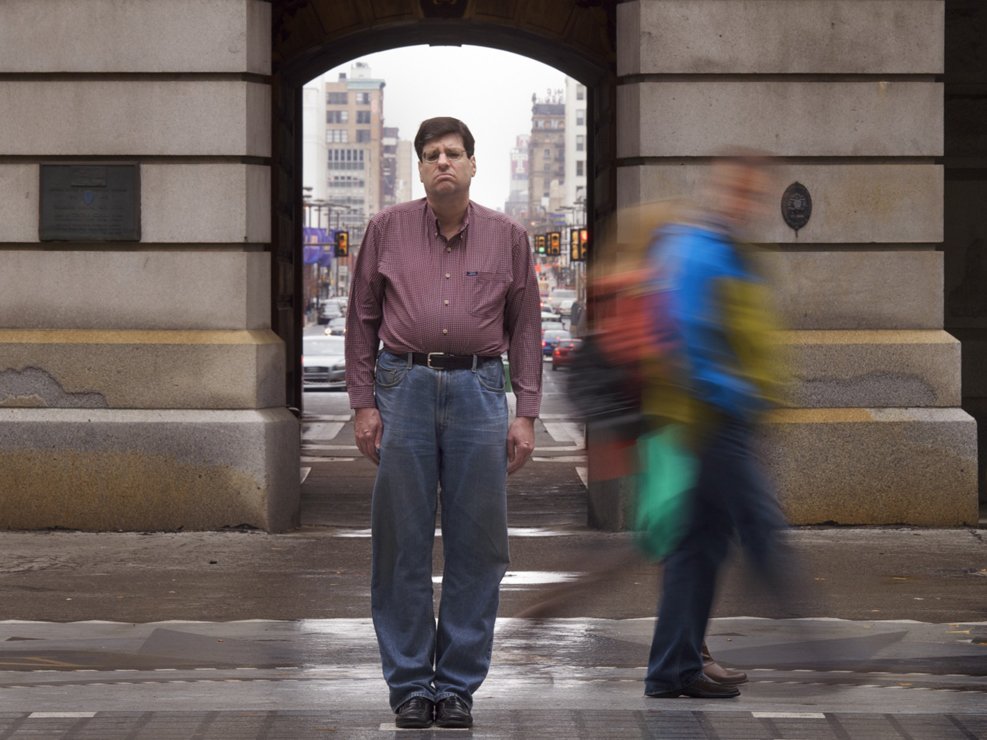 Even though, at the time, I told myself that I didn’t need social attachments, I did need them. I was going psychotic because I was very lonely and because I was trying to do everything myself. The psychosis set in for the simple reason that, with very few meaningful relationships, I resorted to navigating my world by totally using my mind. For example, I would be in a conversation with two people at my job and, instead of being emotionally connected to them, I would tell myself,

I still do this a little bit. As you can see, this would be maddening for anybody, let alone somebody who was frightened, angry, and paranoid. Back then, I trusted no one!

Eventually, my psychiatrist said that enough was enough and I was placed in the outpatient, day program at Friends Hospital in Philadelphia. It was there, in 1990, that I developed my first meaningful friendships since I left high school in 1979. It was eleven years before I started to experience any type of re-bonding process with other human beings. I had been hurt by a friend’s nasty remark right after twelfth grade (we have since mended our relationship) so life was empty for me until I began my “work” in this program. I use the term “work” because Friends stretched me out of my comfort zone.

Another social milestone was the making of the film documentary, OC87: The Obsessive Compulsive, Major Depression, Bipolar, Asperger’s Movie. Because of that film, the term OC87 has taken on new meaning for me because now it also represents a giving up of control and an ability to trust people outside of myself. Even though I was making a film about my life, film is never a solitary process– it is always collaborative. And for somebody with anger and trust issues such as me, making that film was a very challenging task. I had to deal with not getting my way on many occasions — challenging for most, very difficult for me. I knew that, if I wanted the film to be good, (which I believe it is), that I had to rely on individuals who possessed technical and artistic skills beyond my own in some respects. Every project that somebody makes is important but this one I hoped would help others — and I hoped it would help me.

The film helped me begin to trust people again. For the viewers, I hope they feel that they, too, can tell their stories, which is one of the reasons we started OC87 Recovery Diaries. This ability to rely on others is also transformational for recovery, and one of the reasons our site is named OC87 Recovery Diaries. We want the site to help and guide people who are in their own recovery. And it’s important for me to say that, even though I am the Publisher of the site, I don’t control everything that happens here. Even when I was Editor in Chief, I had to pay attention to, and acknowledge, other people’s ideas, especially when they were better than mine.

The old term that “nature abhors a vacuum” is particularly true for me. In 1987, I was so hurt and so angry that I wanted to live in my own vortex of a world — an alternative universe. That is why I wanted to live totally in the intellectual caverns of my mind. Luckily, it didn’t work because, even though life is still difficult for me, I realize that I’m not alone in this world anymore. Life is difficult for everyone! And, perhaps, it’s in that shared struggle that we begin to heal.

For many artists, that’s what their chosen profession is all about: healing. OC87 Recovery Diaries is a journey of struggle and healing. Now that you’ve read about a 1,000 word definition of what OC87 means I hope is it is no longer a curious hieroglyphic but, instead, a term that means transformation, hope, and connection; for me, and, maybe, for you, too. 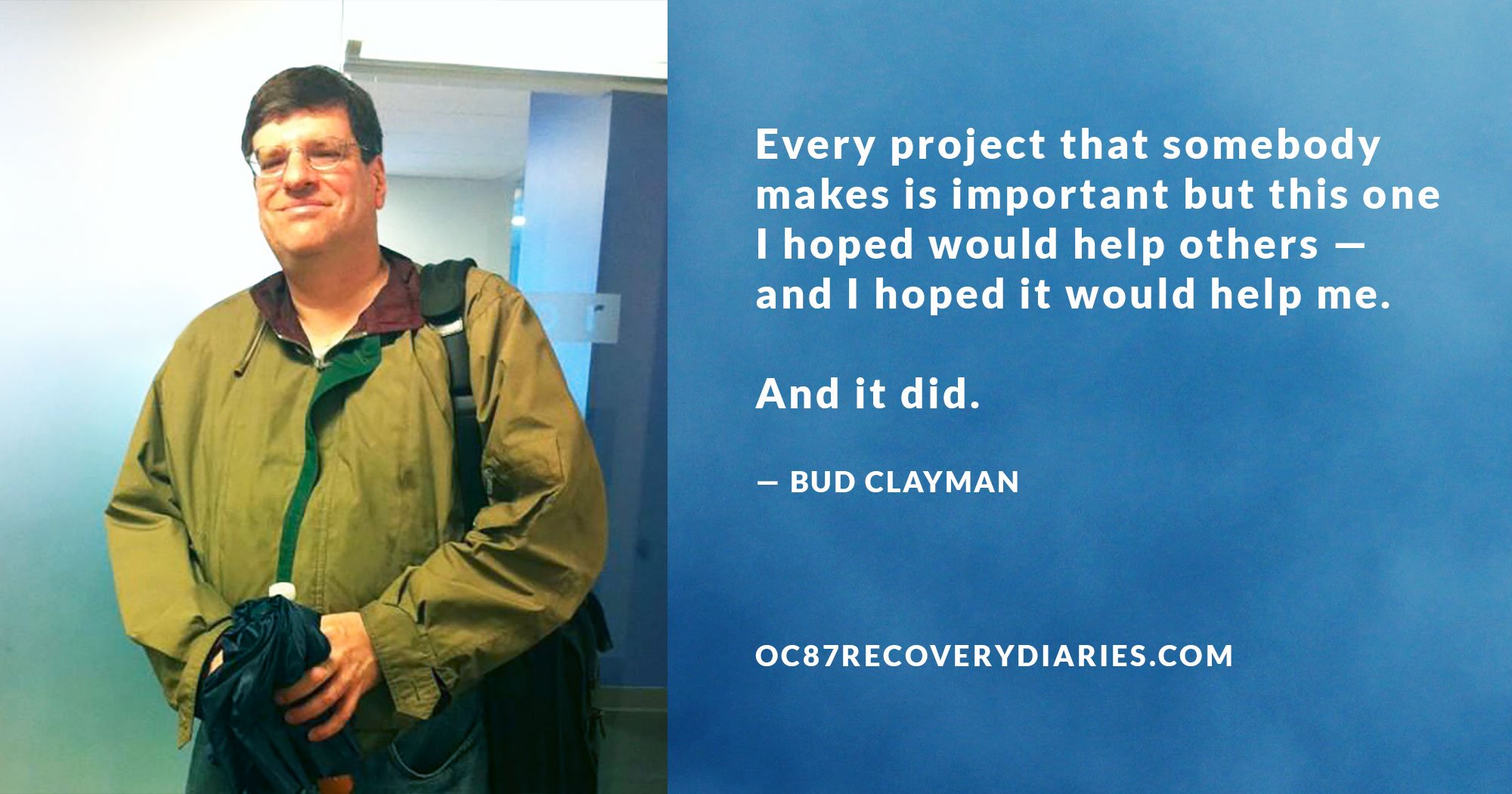 I crossed seamlessly from ambivalence and malaise into an area I'd never been before: actively planning suicide.