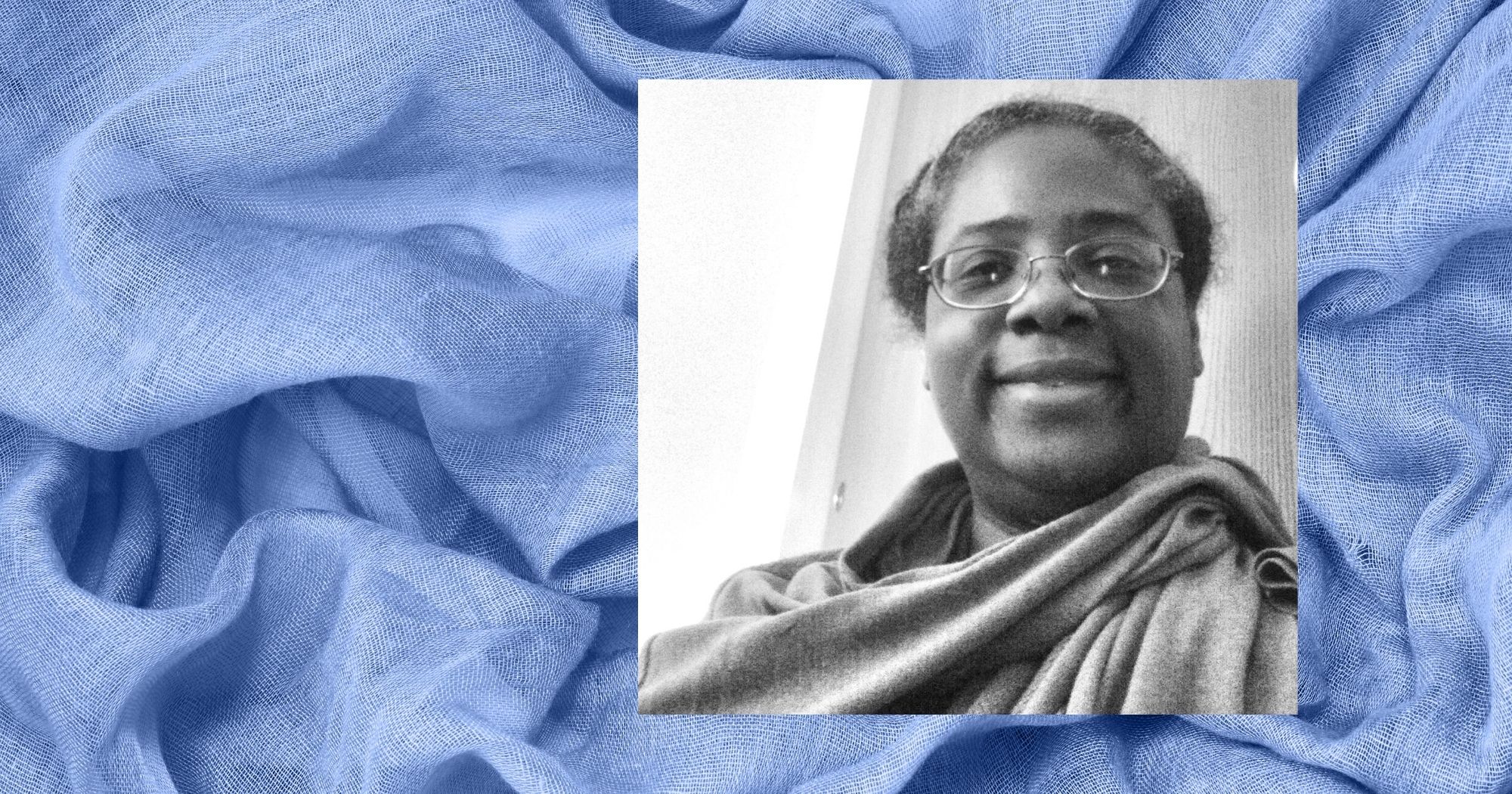 The first night I moved into my studio apartment in Chicago, I heard what sounded like a group of people talking outside the apartment door. The voices were talking about me, threatening me. I grew annoyed, and wished I had the courage to go outside and tell them to be quiet, but they were telling me not to come out into the hallway so I stayed right where I was. The next day, the voices sounded like they were once again coming from inside my studio and were again talking about me, almost like they knew me. How can they speak so intimately about me? Can they see me? How?

It was 2008 and I was thirty-seven years old when I started to hear the voices. I was in my first semester of graduate school for journalism—I’d thought a Master’s degree would help me succeed in the competitive world of freelance writing. I’m a shy and timid person, so trying to market myself as a writer was proving to be a difficult game. I guess I thought a Master’s degree would give me the confidence that I needed. Turns out, it was hard to feel confident given what was going on in the hall of my apartment. 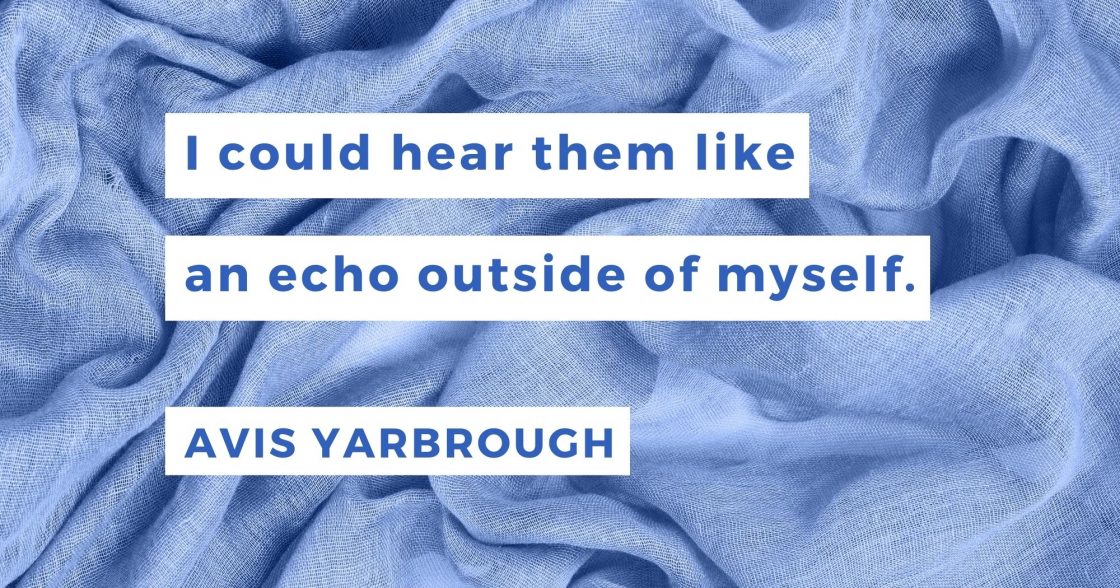 Within a week, I became sure that the voices could see inside my studio too. They knew when I ate toast or read or went to the bathroom. The only conclusion I could come up with was that there were video cameras in my apartment. I searched for them frantically, sure that was it, but I came up with nothing. I complained to management about people in the building harassing me, careful enough not to mention that I believed there were cameras in my studio, afraid they would think I was crazy.

The voices followed me to the library and to school. This confused me. How were they following me but I could not see them? The voices were not in my head—I could hear them like an echo outside of myself. It actually felt like people were standing in front of me talking about me, with one exception: I could not see them.

​Not knowing where else to turn, I called my aunt. I hadn’t talked to her in two years, yet she lived in Chicago, so I asked if I could come over. When something was bothering me as a teenager, it was my aunt that I always talked to. I went over to her home and told her everything. She listened but finally asked me, “Are you sure you’re not just hearing things? 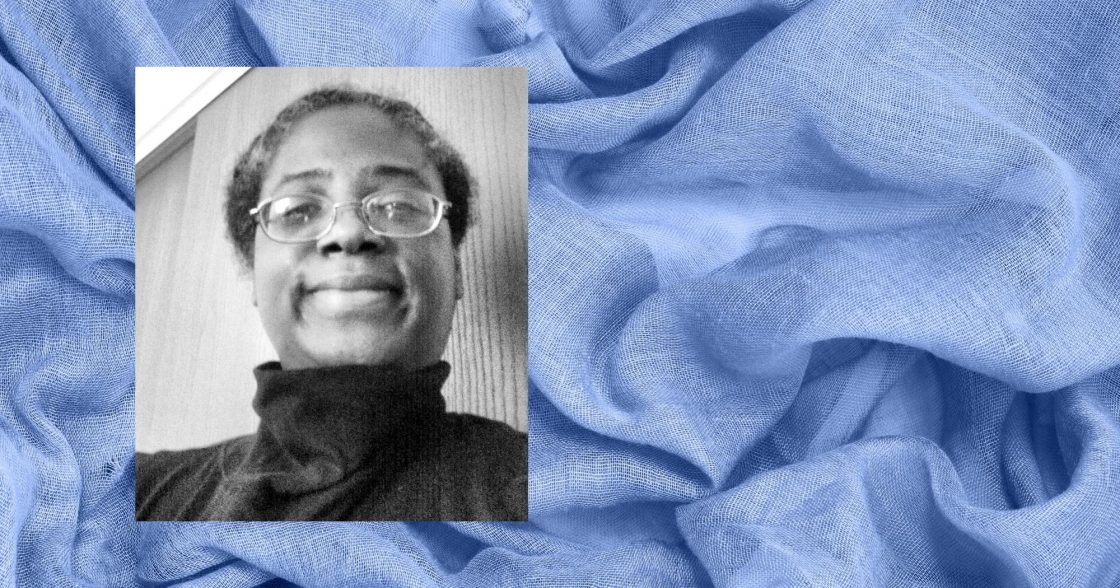 I even went to counseling, determined to prove that I was not mentally ill but was in fact being harassed. I was assigned to a young graduate student in social work. What I remember about her was her dark hair and that she seemed to believe me, but even so, talking to her did not help. The voices did not go away. Eventually it all came to a head, and I decided to break my lease and leave graduate school. The decision came one day while I was walking to the library, and a man on the street said something to me. Immediately, I was sure he was one of the voices that had been harassing me and assumed that other men around me were people from my building who were now following me. I walked out of my apartment, determined not to be harassed anymore with a plan that was murky at best.

I decided to travel. 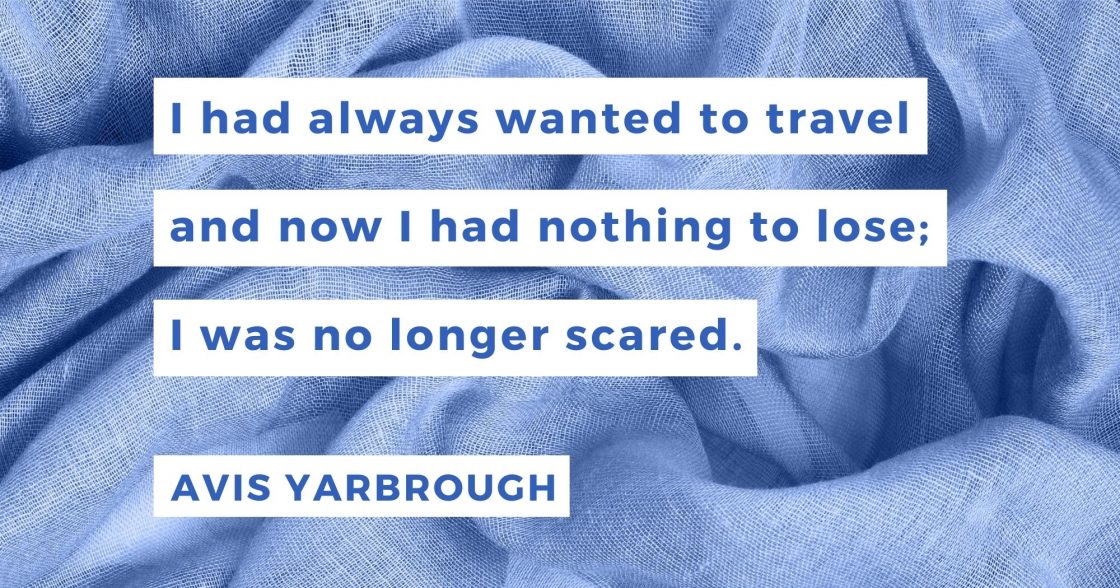 I had always wanted to travel and now I had nothing to lose; I was no longer scared. This was a bold move from me considering my personality usually led me to withdraw from the world—neglecting to explore everything it had to offer. I borrowed some money from a friend and after two days at my aunt’s, I took off, sure that the voices would stop once I got out of Chicago.

The first place I went to was Pittsburgh. I chose Pittsburgh because a couple years before going to graduate school for journalism I applied to a MFA program there, but wasn’t accepted. I guess the city was still on my mind. Unfortunately for me, I quickly found that the voices were not left behind in Chicago. They had followed me here. I was like a prize fighter in the last round—wounded, tired, yet refusing to be crushed.

I couldn’t figure out how to get rid of them. They were real to me. I did not believe I was hearing things. I believed actual people were stalking and talking to me. I visited art galleries, museums, went out to eat in restaurants, and still the voices were there. In my cheap motel room one evening there was a shift. The voices that had been outside of me were now in my head, like a locked door was flung wide open, and it became natural for me to start talking to the voices. Even then, I still wouldn’t believe I was mentally ill. The voices said that they were the people from the apartment and that they were “still watching me.” They were as real to me as the sun or the concrete beneath my feet.

I stayed in Pittsburgh for three days until eventually, and impulsively, I took the Greyhound bus to Buffalo, New York. I stayed in the motel room most of the time I was there, walked around and filled out job applications at Dunkin Donuts and McDonald’s. I was sure that I could live at the motel while I worked at one of these places and might eventually save some money. The voices kept talking to me and I kept believing they were my old friends from Chicago. I could not get away from them. When I look back I can only think, they were so loud, and I was so tired. Yet, they kept me company. 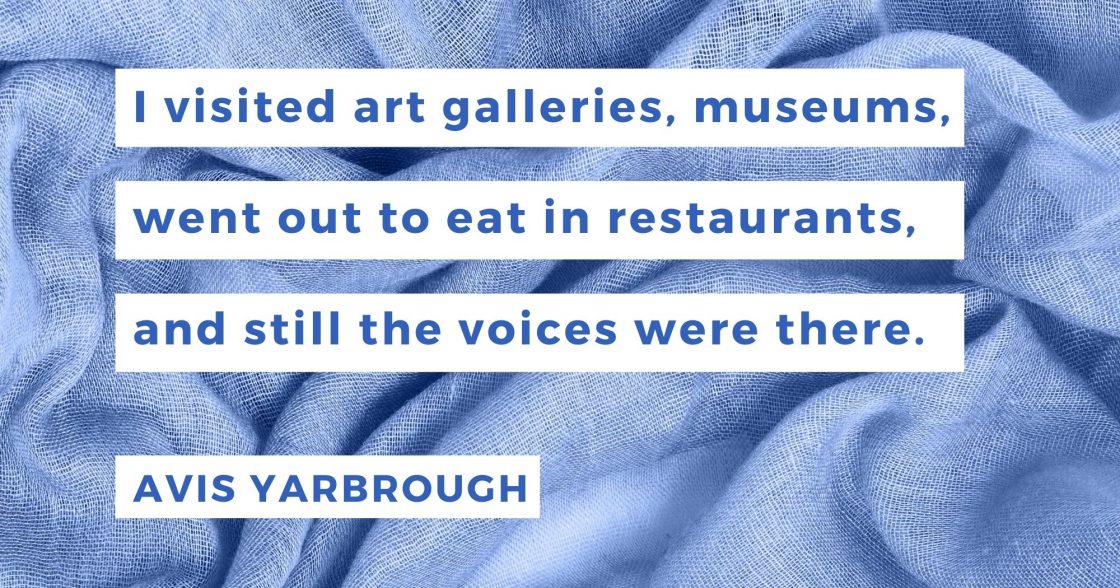 I couldn’t even watch television in my motel room because the voices made too much noise. I had nothing: no home, very little money left, I was barely holding on to my sanity. I had to do something. That’s when I decided to go to Niagara Falls. I had seen a sign for Niagara Falls on the way to Buffalo and became intrigued with going. In my head I saw visions of people going over the falls in barrels. I became obsessed with the idea of going to see the waterfalls, and if I was careful, I would have just enough money to do it.

I set about finding a way to get to the Falls. The voices were there as usual. After a while I started to become used to them. The voices could be at once interesting and at the same time terrifying. They were interesting because I thought they were actual people following me. But they would also threaten to harm me or just be plain mean. They would say, “We are never going to leave you alone.”

The night I arrived in Niagara Falls I took the local bus down a long road. I saw hotels and small businesses before the bus driver turned left. The bus driver was kind enough to tell me where to get off. “Walk straight down the path and you will see the park.”

​It was night and the stores in the park were closed but I was finally there and could hear the falls before I saw them. When they finally came into view, I felt a swelling in my chest and a feeling of happiness that I hadn’t felt since I first started hearing voices. It almost choked me. I walked all around the park. I walked over the bridge and looking down I could see the white foamy crashing waves, and I thought, it would be a long way to fall. I walked over the dirt paths, passed great, green trees which took me to a vista point where you could see Niagara Falls from a different angle. 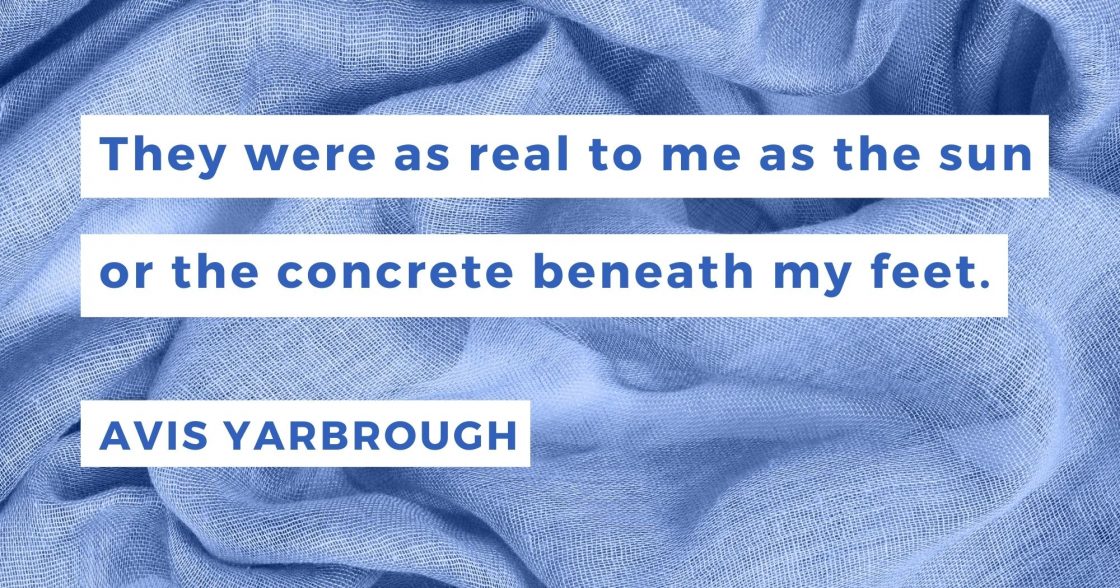 And when I arrived, I cried. I cried because I could not believe I did it. I could not believe I was there. You would have to know me to realize how remarkable this was for me. I am shy. I mean seriously shy, and I have a hard time talking to people and meeting a person’s gaze. I hadn’t felt particularly adventurous up until this moment. I was so tired after being harassed by the voices that I just did not care anymore. I wasn’t afraid anymore. I felt I could finally do what I wanted. I, shy, timid me, had gotten on a bus then a train and decided to go to a different city to see Niagara Falls, and I was standing there looking at them. I had done it and everything would have been perfect except for the voices nagging behind me, like a younger sibling with whom you were forced to travel. The voices reminded me that everything wasn’t perfect.

I wanted to do this forever, travel and visit places. I talked to the voices telling them how amazing this was and, for the first time, I felt not so alone… like they were my company or that they were there for me. I asked myself, is that weird to think that? They were still scary, but I thought they were something I could deal with.

In 2010 I was diagnosed as schizoaffective which is a combination of schizophrenia and a mood disorder; depression for me. When I was first told this I did not believe it. I traveled, I wrote, and I was sure that people who were mentally ill did not do these things. It was a slow process for me. It took up to a year before I started to believe it and take my medication on a regular basis, which I have now taken for the past ten years. I still hear voices. They are a source of annoyance, comfort, and fear for me. I have lived with my mother during this time, and I have traveled some but nothing like before. It’s my dream to get up and travel again; the time I traveled before changed me. I realized that even though I was shy I could adventure, see new things, feel new things. I could take care of myself even with the voices. I realized that I would be alright. 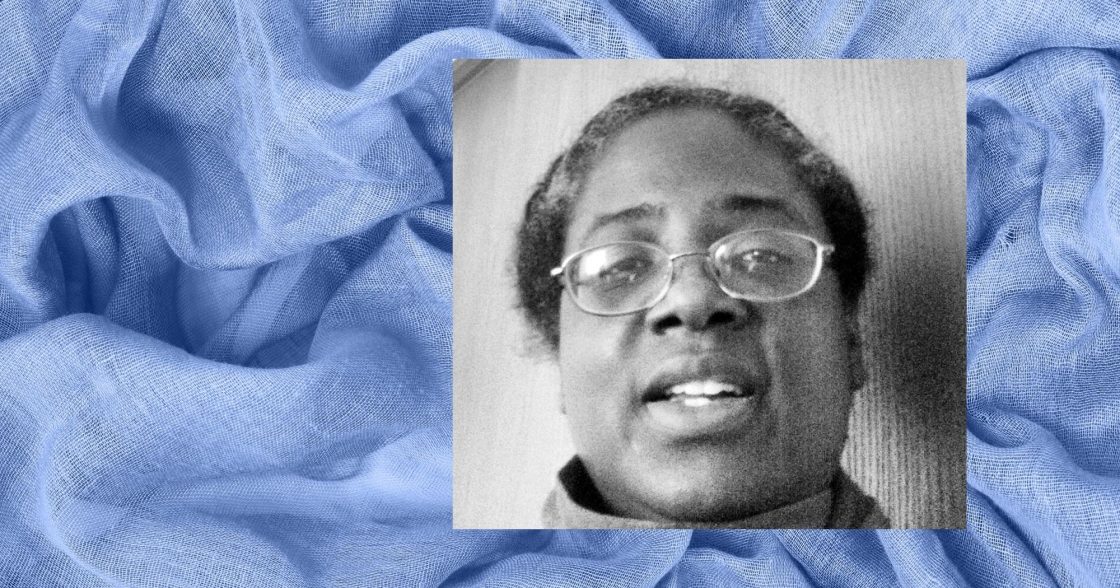 Avis Yarbrough is a freelance writer who is also working on a novel titled, “What I Learned While Reading Romance Novels.” She also has an Etsy store called IWriteAboutLove where she sells her romantic writings. She wanted to share her mental illness journey because she believes that people should be able to tell their own stories. You can contact Avis via email.

Khadija grew up with two hard-working, loving parents, it was later in life that she experienced the impact of her father’s depression.