VIDEO - A Letter to Niyyah: Trauma Under the Bridge 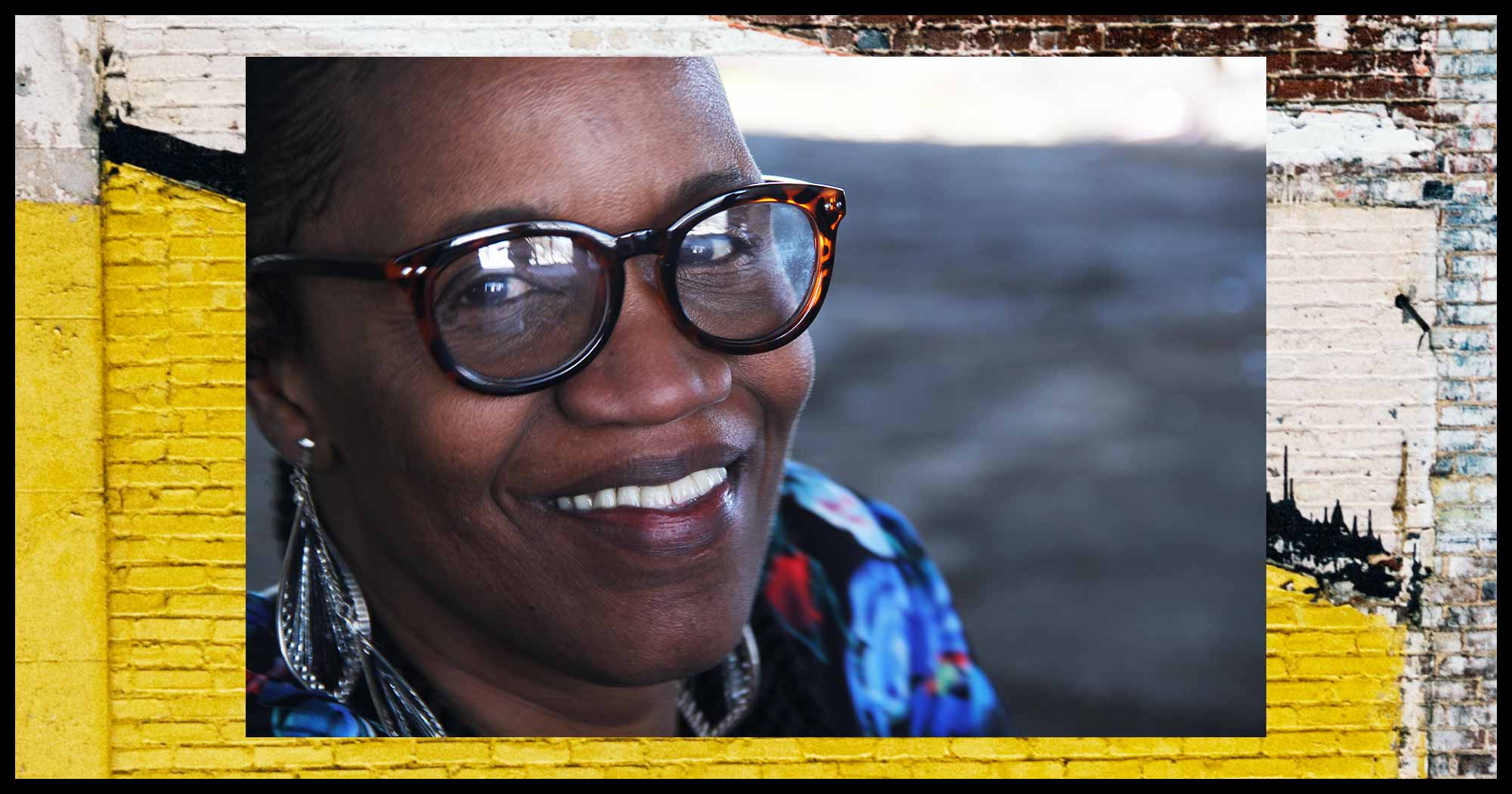 To be honest, Sharon Wise found me. And I’m so glad she did.

About a year ago, I received a voicemail message from someone I didn’t know, named Sharon, who had just finished watching HOLLYWOOD BEAUTY SALON, a film I directed about mental health recovery.

Sharon was over the moon for the film. She had a visceral connection with the recovery journeys of the men and women who were featured, and she loved the collaborative aspect of the filmmaking. She wanted to meet.

Sharon lives in Washington, D.C., and told me she was coming to my hometown, Philadelphia, to participate in a mental health conference. (Sharon is a very busy woman — artist, advocate, and activist. She travels all over the country, teaching and training peers, government officials, and other interested community members about Trauma-Informed Care and substance abuse prevention.) We made a date to meet in Philadelphia.

I liked her immediately. She exuded confidence, warmth and friendliness. And because she now spends a good deal of her time telling her story, using the trauma she suffered as a child and young adult as a learning and teaching tool, she was more than comfortable diving in to her story:

Sharon was diagnosed with a mental illness at a young age and was hospitalized for the first time at the age of nine. Throughout her life, she was in over thirty psychiatric institutions and hospitals, many times on an involuntary basis, where she was secluded and restrained. She experienced homelessness and became addicted to drugs during her youth. She lived under a bridge. 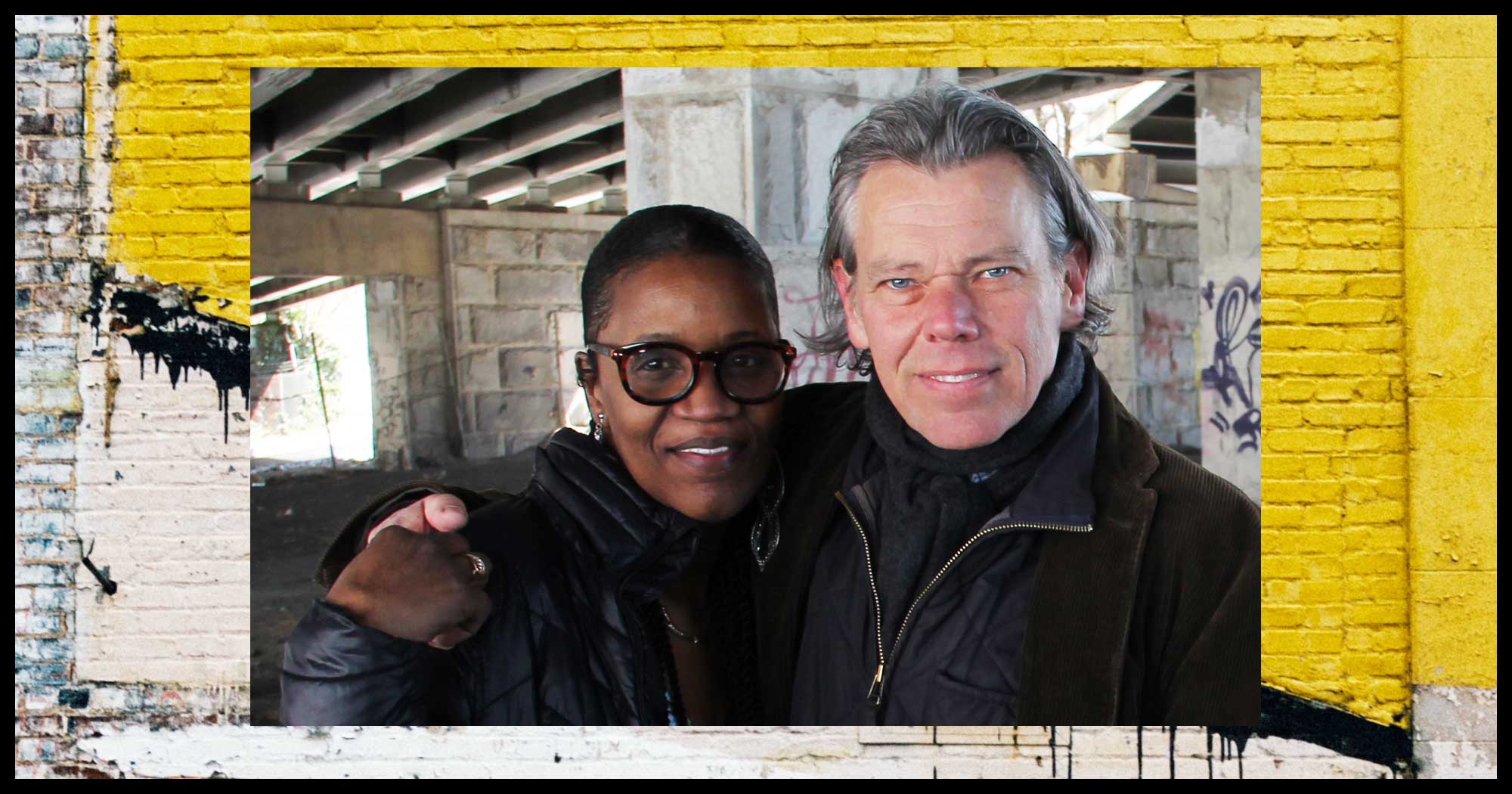 Sharon told me all of this with a matter-of-fact air. Her emotional tone shifted, though, when she spoke about her relationship with her son, Teddy. She told me how, years after she had “surrendered” him, she was reunited and they have a strong and supportive relationship.

Then she spoke of Niyyah, her daughter, whom she also surrendered when she was in the throes of mental illness and addiction. Now her pain was visible, and palpable. She told me how she was working on the relationship, though it was a struggle. She spoke of how she wished she could explain her choices in a way that Niyyah could hear her.

Immediately, I had a vision of Sharon under a bridge, the place where she had experienced such trauma, writing to Niyyah. The location that had been such a source of such trauma could be reclaimed as a space of recovery. I proposed the idea to Sharon and she was supportive. She then wrote three letters to Niyyah that provided the narrative framework for our filming.

This video is the result. It’s tough and beautiful. Tremendously sad and remarkably hopeful. Sharon Wise is one strong, brave human.

Seeing the debris and everything, it’s like everything has a story attached to it. Like something. Something happens to a person and they end up in a place where this is alright. Where the trash, the debris, someone’s feces, things like that, you just move it over and you find yourself a space, you know?

Somebody has changed their clothes here. And somebody has slept here and you see a little babies shoe right here. There’s no telling how many women have come here to be safe or to sleep and their children were with them.

You see this little bra and say “OK, did someone take this off her? Did someone force her?”

I was so numb to so many, just to so many different horrors that happened under these overpasses.

People might think, well who in their right mind would come to this?

This was a sanctuary compared to where I grew up at. Your mother’s boyfriend sexually assaulting you and then you have no one to tell because your mother don’t believe you.

But whatever happened, I ended up here. 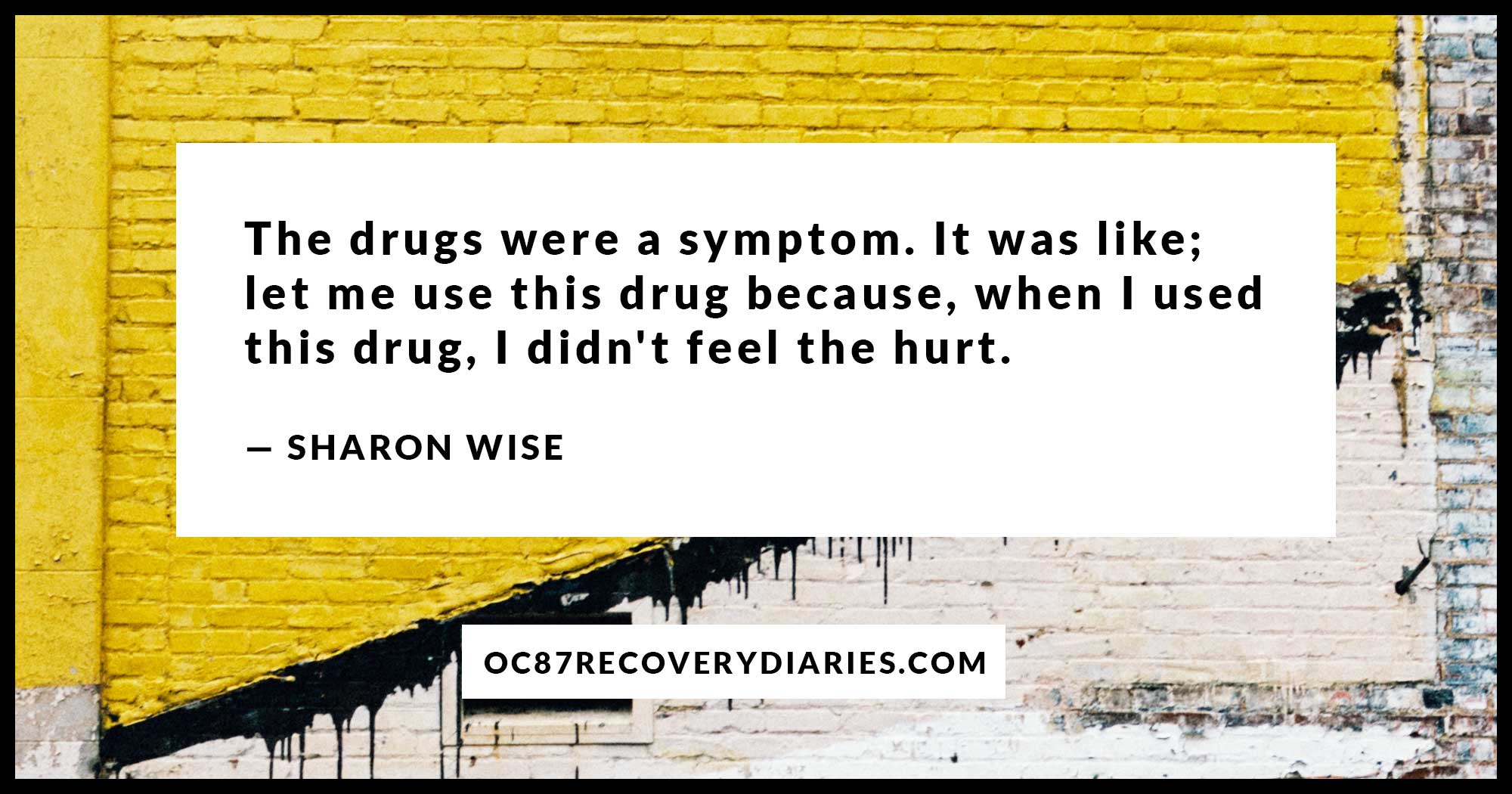 The drugs were a symptom. It was like; let me use this drug because, when I used this drug, I didn’t feel the hurt. Then when I would get raped I was like, “just do it, so I can get high.”

I got mental health services, somebody addressed my substance abuse. You know, and before you know it, my mother was getting in touch regularly, saying, “Do you want to get your son back?” and I said, “Yeah.”

I got him back in my life, he was ten. And I got legal custody of him at fifteen. But my daughter was still gone.

Look at the generations. My grandmother wasn’t wanted, and she had my mother. My mother was the result of a rape that she had me. She didn’t know how to love me, so I gave my kids up. Four generations of women hurt, broken. Look at everybody that got affected. My children were in foster care because of what happened to my grandmother.

Even in this cold, these little buds are coming out. They’re trying to grow, and this is what I’m talking about. In all of this debris, there’s a bluejay over there. There’s flowers growing, and my recovery started long before I got from under this bridge. Because the bridge and the overpass and the cutting and the drugs were all a part of the recovery, if that makes sense. What I mean is that just like this bud, amongst all this filthy and all of the cold and the snow; it’s still trying to live.

Sharon. I’m the flower that’s gonna bloom. I’m the flower that has bloomed, but I have to continue to water and nurture myself by letting my soul be free of what happened, cause some of it wasn’t my fault, some of it was my fault. The main thing is surrendering my children. I always say it was my fault. With my son, I remember the night I took him … I tried to keep my kids. I tried so hard to keep them.

Is me and my daughter relationship perfect? No. Not yet. But the operative word is yet. 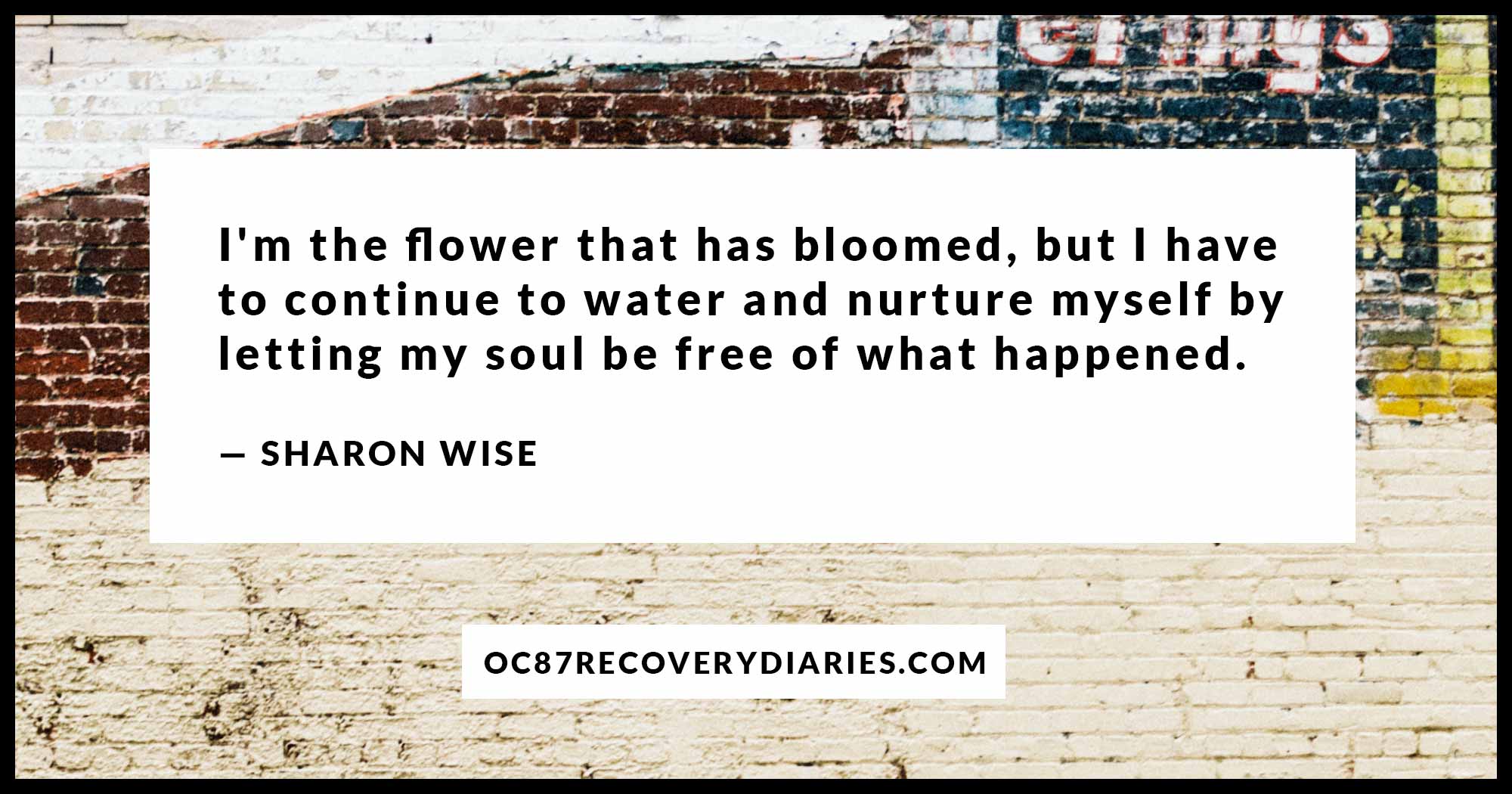 Sharon has over fifteen years in the mental health consumer movement and has operated the first 100% consumer-run organization in the Washington, D.C. metropolitan area. She holds a Master’s in Human Services, is a certified whole health and peer specialist, a certified WRAP (Wellness Recovery Action Plan) facilitator, and a talented visual and performing artist. Her awards include the 2009 Joy Evans Award from the D.C. Office of Disability Rights, a 2010 VOICE Award from the Substance Abuse and Mental Health Services Administration, a 2011 Martin Luther King Jr. Community Service Award, and others. She has written several plays, including the award-winning “Meet Me on the Moon,” and a series of eleven self-published children’s books about a dog who has bipolar disorder and a trauma history.

Winden Rowe's approach to sustained recovery for clients centers around the biological, psychological, and social implications of traumatic stress.