An Outsider in My Own Skin; a Transgender Mental Health Story - OC87 Recovery Diaries 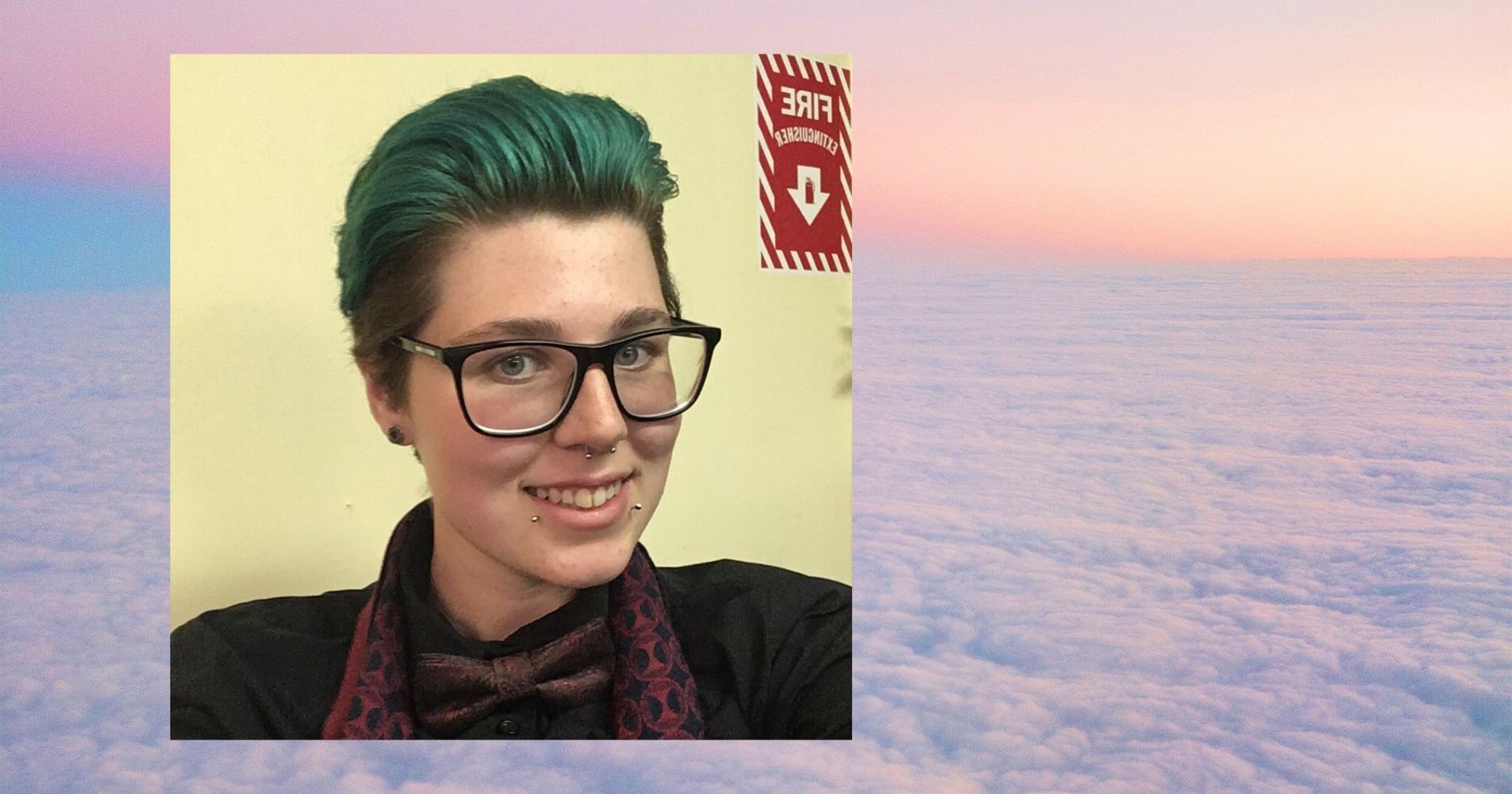 An Outsider in My Own Skin; a Transgender Mental Health Story

Have you ever felt like an outsider in your own skin? As if the body you’re stuck with isn’t really something you own, but something you’ve picked up for the time being; like the shell of a hermit crab. Have you ever felt like an outsider, not just to those around you, but to yourself? No matter how much you love your body, there’s probably still something you’d like to change about it. Something that you believe needs to be fixed. Nobody is wholly comfortable with how their body looks, or feels. For some, this feeling is transient, for others it’s all-consuming. For some, it comes easily to just have a body and live with it; to learn to love it or change the things they don’t. For the unlucky ones it’s not quite so simple.

It took a decade of trying to destroy my body to understand it. So I spent most of my life trying to fix what felt like a mistake. At nine years old I began to show symptoms of bulimia, and by seventeen it became my entire life. It wasn’t until I came out as transgender at nineteen that my journey towards recovery began.

When I was nine I hadn’t even heard the word transgender, and all the dysphoria left me feeling confused and frustrated. I didn’t feel like a girl but I thought I had to be one and this added to my deep depression. I thought the key to happiness, for a woman, was to be thin, feminine and beautiful. I thought I needed a husband to be whole. This idea of happiness came from everything around me; from the toys I played with to the tv shows I watched. It came from watching my mother obsess over her diets and fitness plans. I had it instilled in me that I had to be thin to be beautiful and I had to be beautiful to be happy. 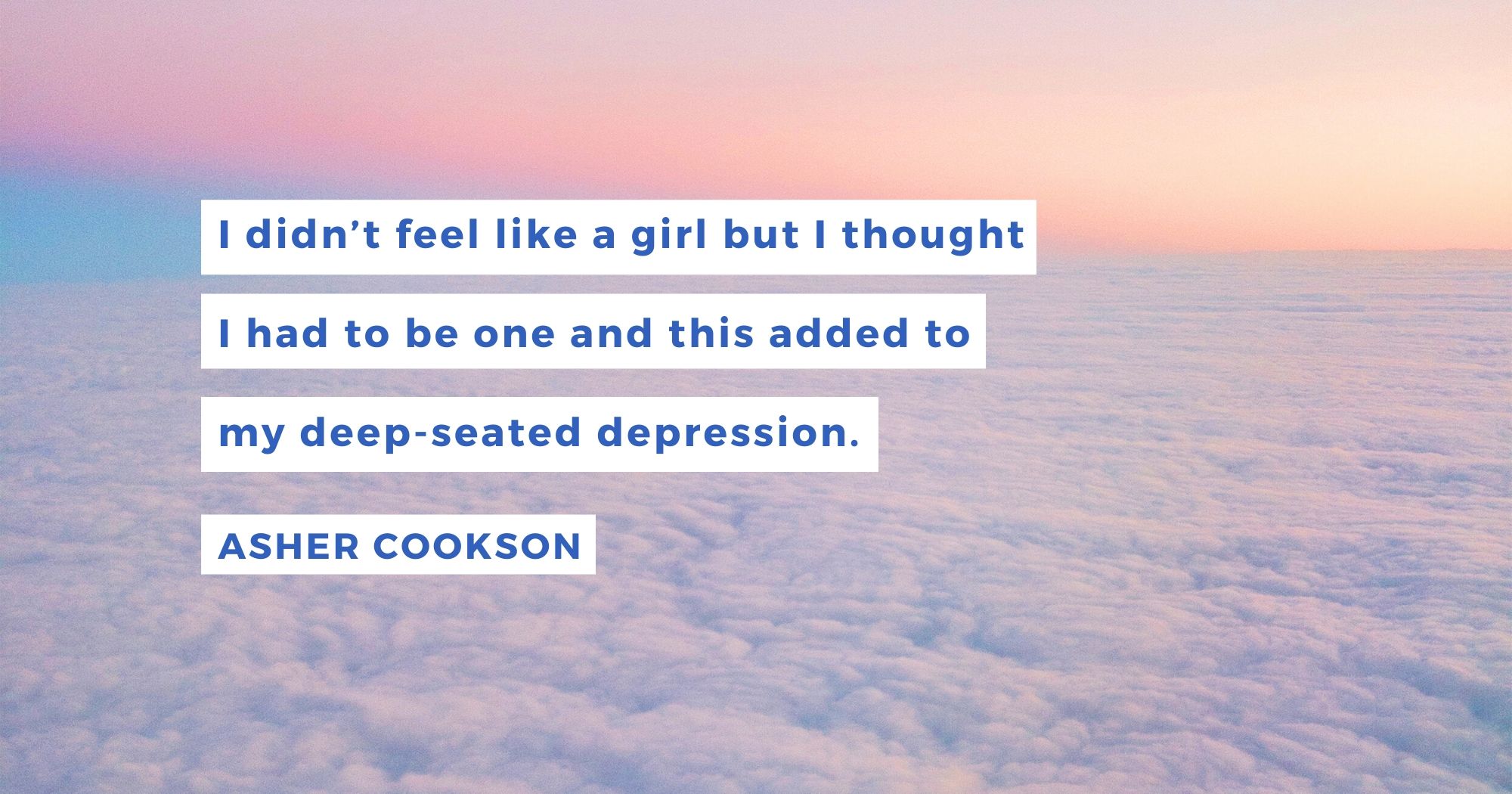 I had an anger I couldn’t control and my erratic reactions drew in unwanted attention. Despite the fact that I never really fit in, the bullying didn’t get bad until I was at my most vulnerable. The basement to my parents’ house had flooded around the time they had broken up, so they were staying with their respective parents. Each week, I’d stay at a different grandparent’s house, and the change and instability contributed to mounting anxiety that manifested in physical symptoms. I was already an easy target because I was chubby and loud but I painted that target on my forehead the day I stress-vomited on the playground. When I started to get bullied for my weight, it gave me a place to put all that discomfort, and I began to venomously hate my body.

I started to view it as a problem and I began to purge to try and fix it. Soon enough it was happening daily. The bullying had become inescapable. It was everywhere; my school, my after-school program, my temporary home. I was worn out and hopeless; and purging made me feel like I was in control. I soon became obsessed with chasing a lower number on the scale.

Regardless of my habit my weight went unchanged. I was stuck in a cycle of binging and purging. Though I suspected that I had an eating disorder I thought it unimportant. This was only cemented when I confided in a friend and she let it slip to anyone who would listen. The result was a mean spirited boy telling me I was “too fat to have an eating disorder.” Both his words and her act stayed with me, and I wrote off my behaviour as normal, and became more closed off. 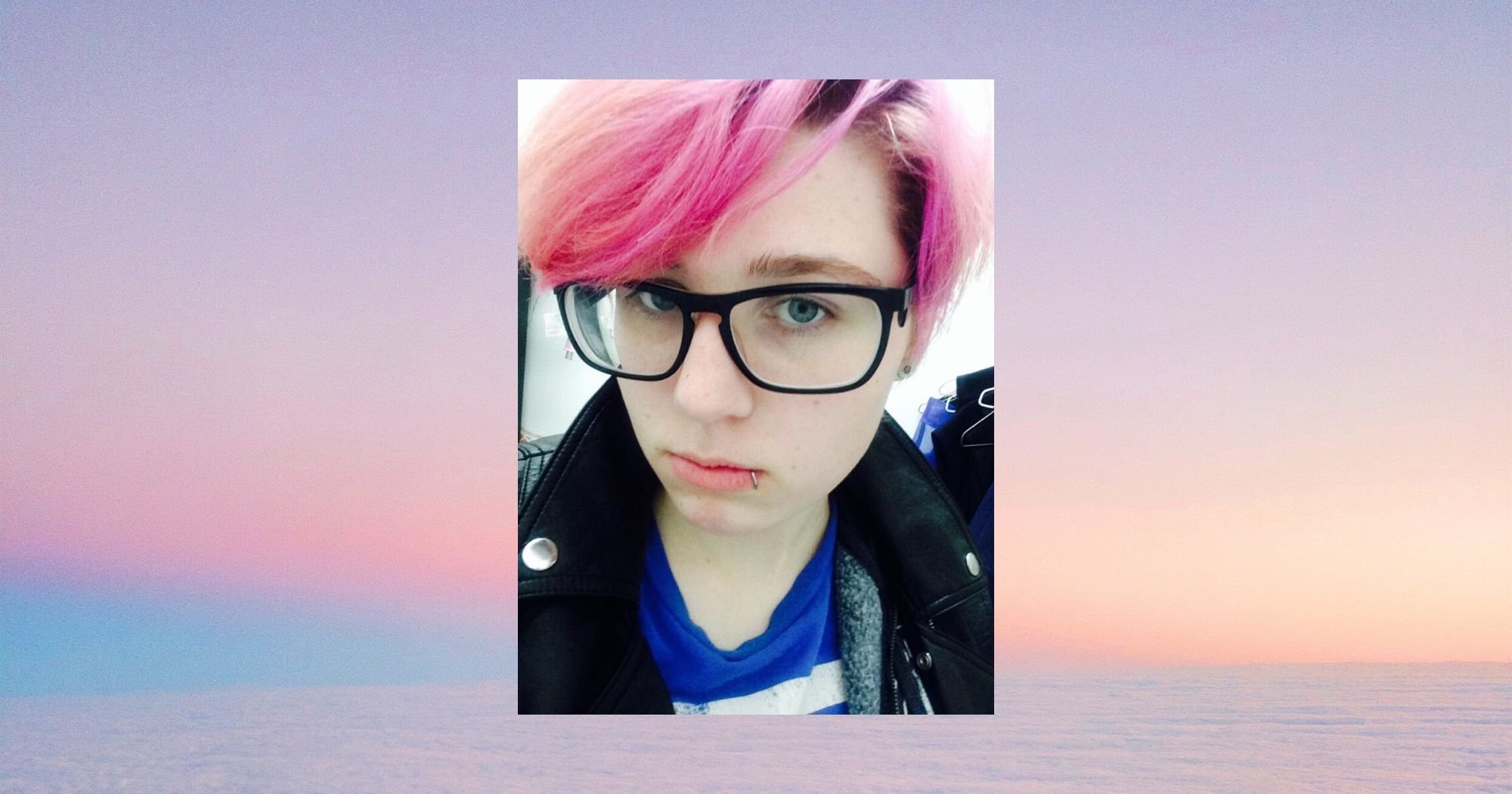 In high school, I began to starve myself. While my home life was more stable; I was living with my father full-time and saw my mother sporadically, I was still at a loss of control. The older I got the more alien my body felt. I was beginning to question my gender, and that scared me. My only knowledge of trans people came from television, where they were always the punch line. What I did know was that I didn’t want to be anybody’s punchline. 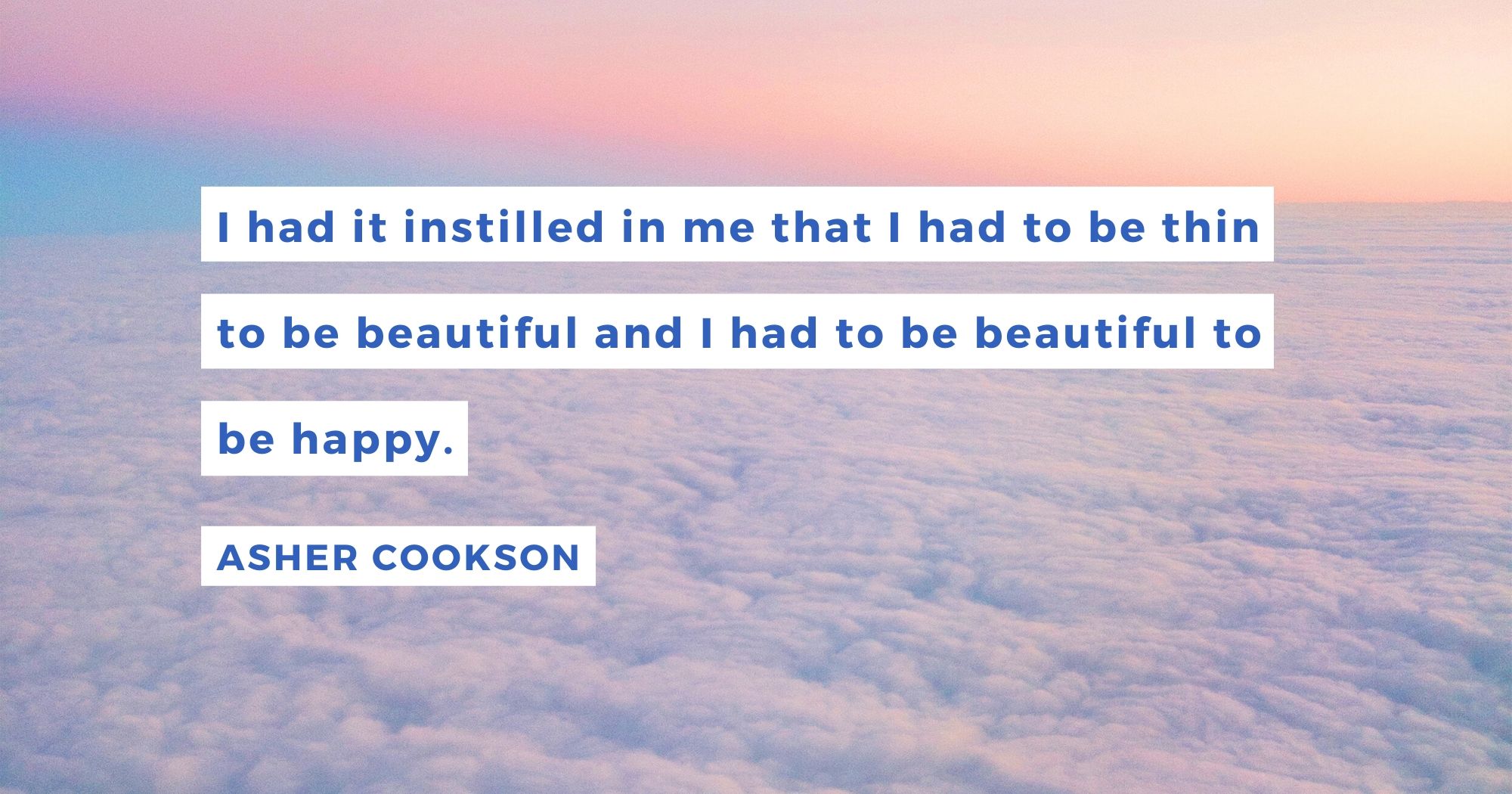 I became obsessed with the fantasy of being the perfect woman. With being thin, feminine and beautiful. I became consumed with my eating disorder. I tracked every calorie down to a stick of gum. I became obsessed with working out, and tracked the calories I burned. When I actually ate something, I’d purge, and when my ribs would ache too much to purge, I would take laxatives. My entire life revolved around losing weight.

I became isolated and paranoid. I weighed myself every chance I got, several times to be sure. I interpreted every compliment as ridicule. Even my closest friends’ kind words felt like jabs. I pushed away anyone who showed concern and convinced my father it was just the depression; that the new pills our family doctor gave me were working. Lying had become second nature; to everyone around me, and to myself.

Only when I was creating did I allow myself to be honest. I found comfort in words and paint and not much else. I painted what I couldn’t admit to myself. I buried my masculinity in paint and my self-loathing in ink. Even though I had these outlets I was too afraid to recover to let them help. I was terrified of losing something that had become a part of my identity and too afraid of the weight I would inevitably gain. I only got worse. 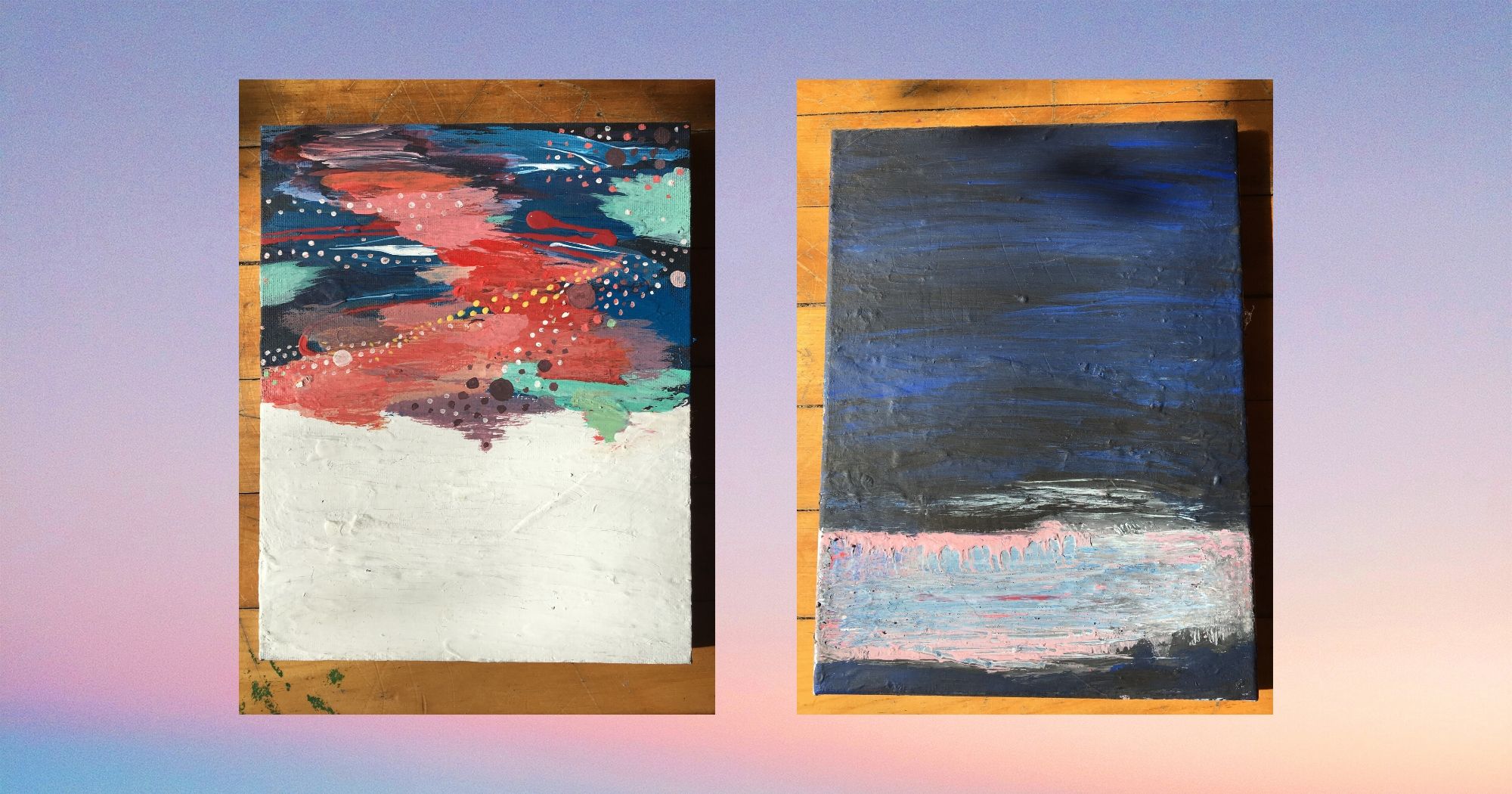 My last semester hit me like a train. School had never been a priority and I was too suicidal to imagine a life after high school until it was staring me in the face. I spent the entirety of that period of my life in an insomniac’s daze. My classes were all arts, the only thing I thrived in, and I put all of my energy and my overwhelming emotion into the arts. My childhood idea of happiness was still embedded in me, and I tried as hard as I could to be feminine, to become the ideal woman. 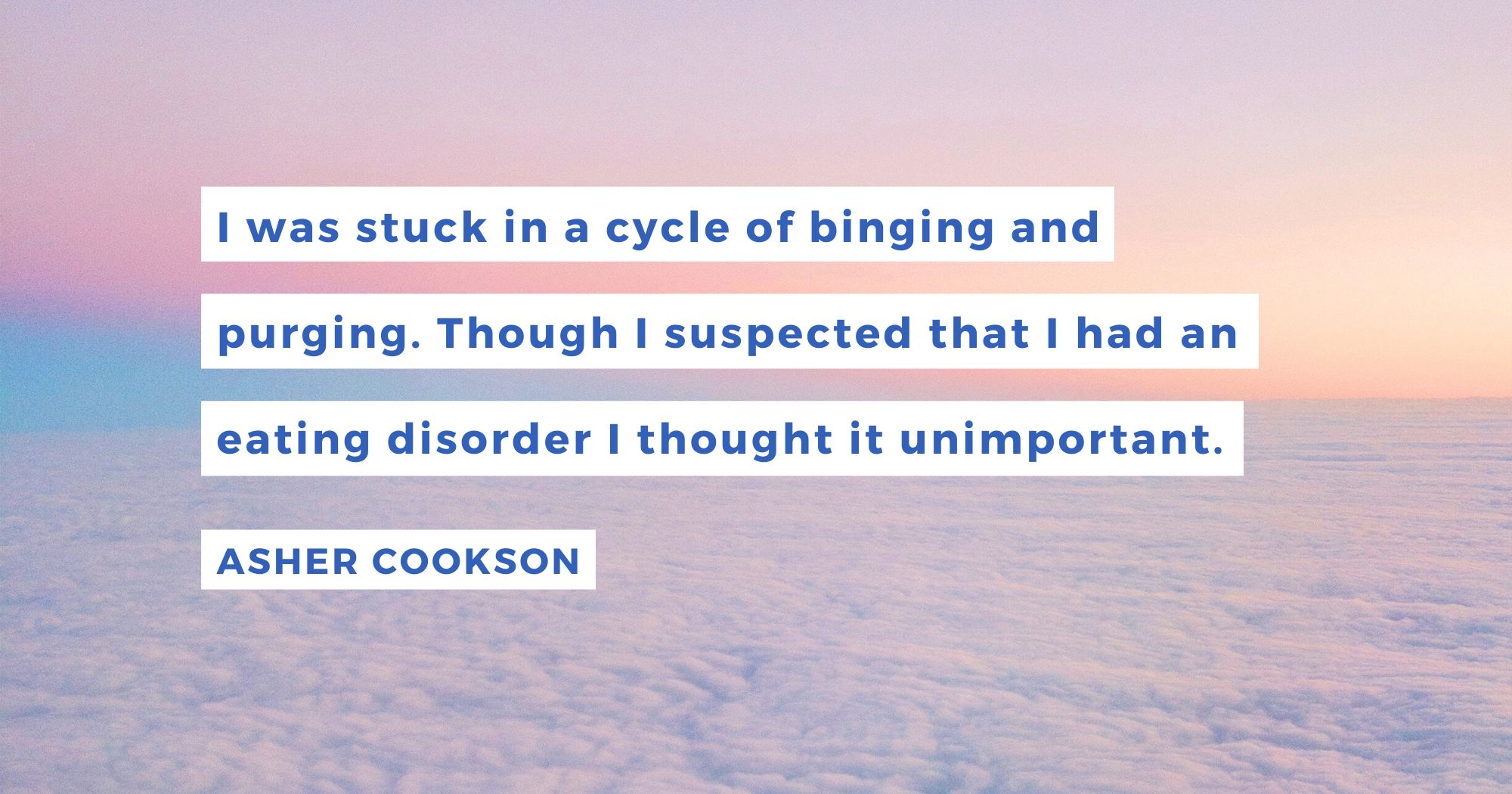 When I started university in the fall it became even harder to ignore my identity. I had several trans friends, and while I accepted them without question, I couldn’t extend this empathy to myself. My busy schedule kept me from painting and the need to express my gender only increased. Juggling school, work and my eating disorder proved to be too much, and I failed my first year.

Although I was devastated at the time, failing was the best thing for me. I was coming to terms with my gender and began to accept myself. I put the idea of being the perfect woman behind me and accepted that I was a man, and that I could no longer pretend to be something I wasn’t. Once I accepted this, I began to realize that my dysphoria was only making my eating disorder worse. I started to become more comfortable with my body once I came out and began to transition. Understanding where most of the problem was coming from made me realize I wanted to get better. Though I was still afraid wanting to recover was the first step.

Though I had identified the root of the problem and had accepted myself, I was still struggling. I found myself in a loop of guilt and depression. I was better than I had been in high school, but I was still restricting my calories and beating myself up over any change in my weight. I had cut my hair and changed my name, but I was anxious of the weight gain that testosterone could cause and halted that part of my transition. 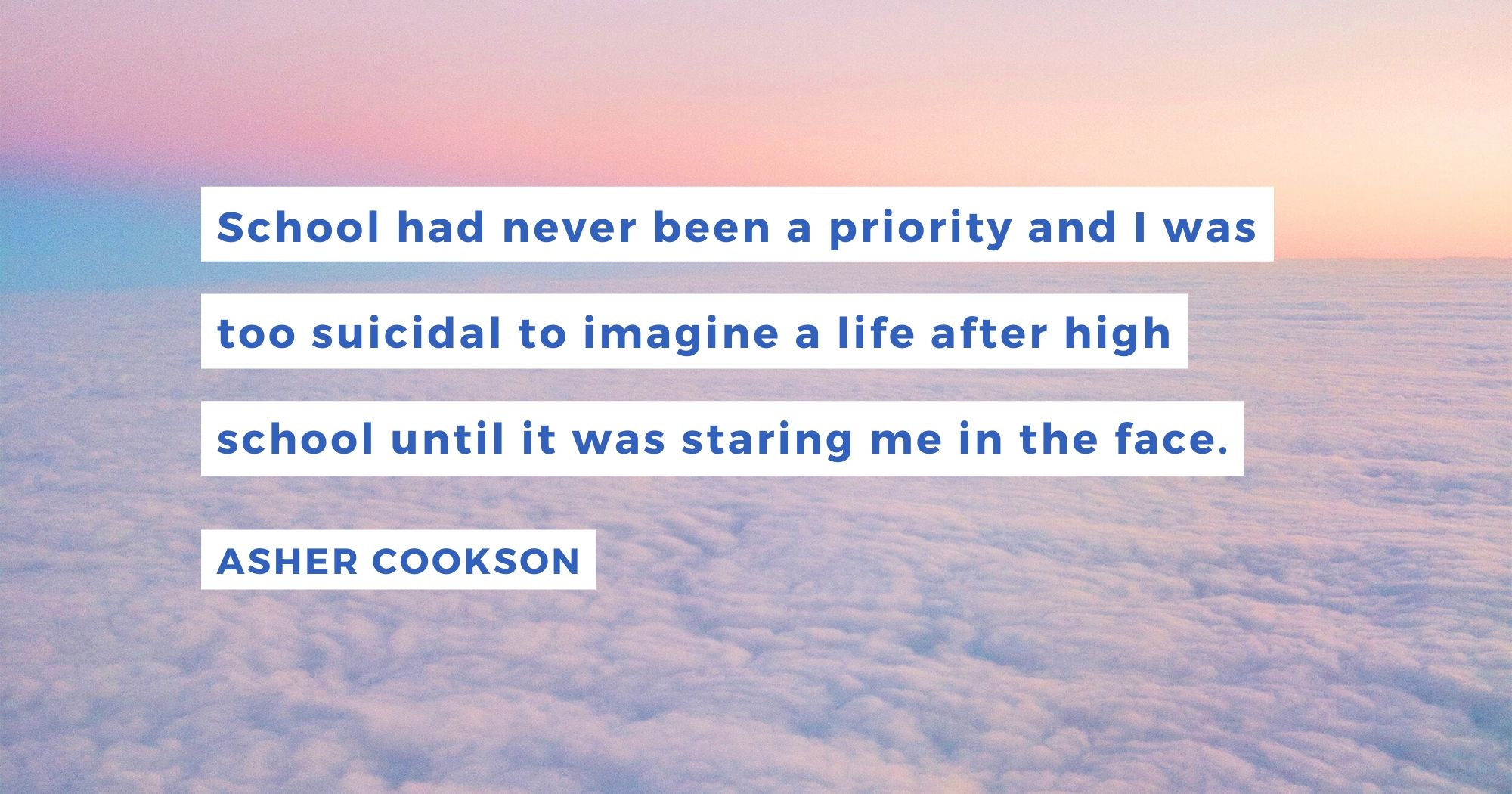 After a year off I began classes at a community college where I met my now-boyfriend. I was in a better place but I was on the edge of a relapse, and he was fresh out of a long term relationship. We had become fast friends and his casual affection put me at ease. Before we had even begun to date I found myself opening up to him fully. I allowed him to read poems I wouldn’t share with others, I let him see art projects I kept hidden, and I confided in him about my fears and struggles. He responded with acceptance and empathy, and soon after began to text me daily to make sure I had eaten and to remind me I had value. 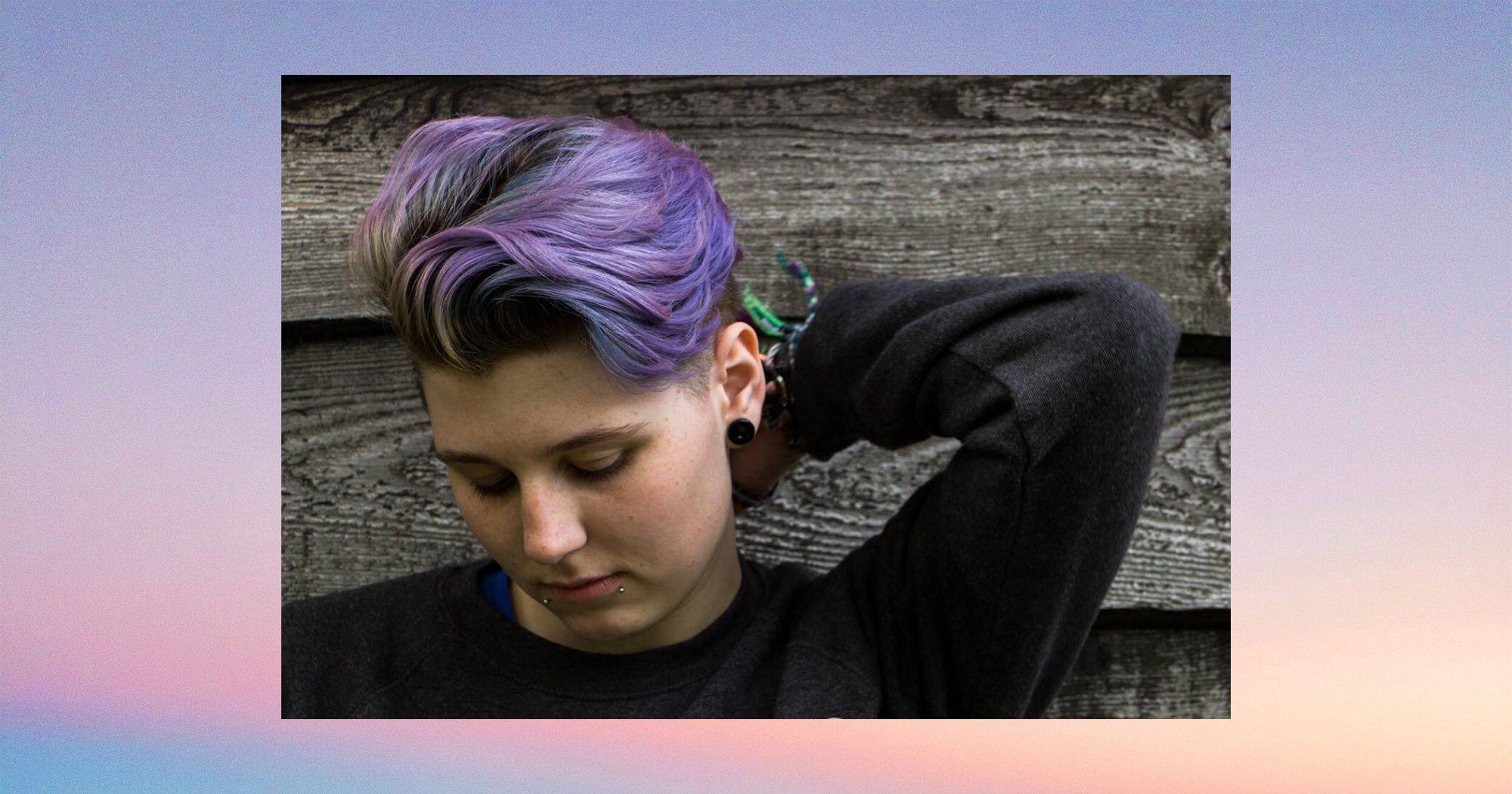 Three years later, in late 2018, I began Hormone Replacement Therapy. I am no longer ashamed to say that I am a transgender man nor am I afraid of being healthy. My recovery from bulimia has been difficult but I am proud of how far I have come. I have found comfort in my friends, in my boyfriend, and in my art. I am writing therapeutically and painting more than ever. I may never be wholly comfortable in my own skin but I am learning to make a home of my body. I am proud of who I am and how far I’ve come. I know that no matter what size I am, I am valuable. I am loved. And even on the worst days, that’s enough.

Asher Cookson is a twenty-three year old writer from Nova Scotia, Canada. He is currently working on a book of poems, and will be attending university in the fall for journalism and gender studies. Asher copes with his various mental illnesses through writing, painting, music and photography. He hopes to turn his passions and coping mechanisms into a career. You can find some of Asher’s photos, art and updates on his instagram as well as more art here.

Dancer Morgan Rondinelli wrestles with her weight gain and its impact on her mental health challenges.