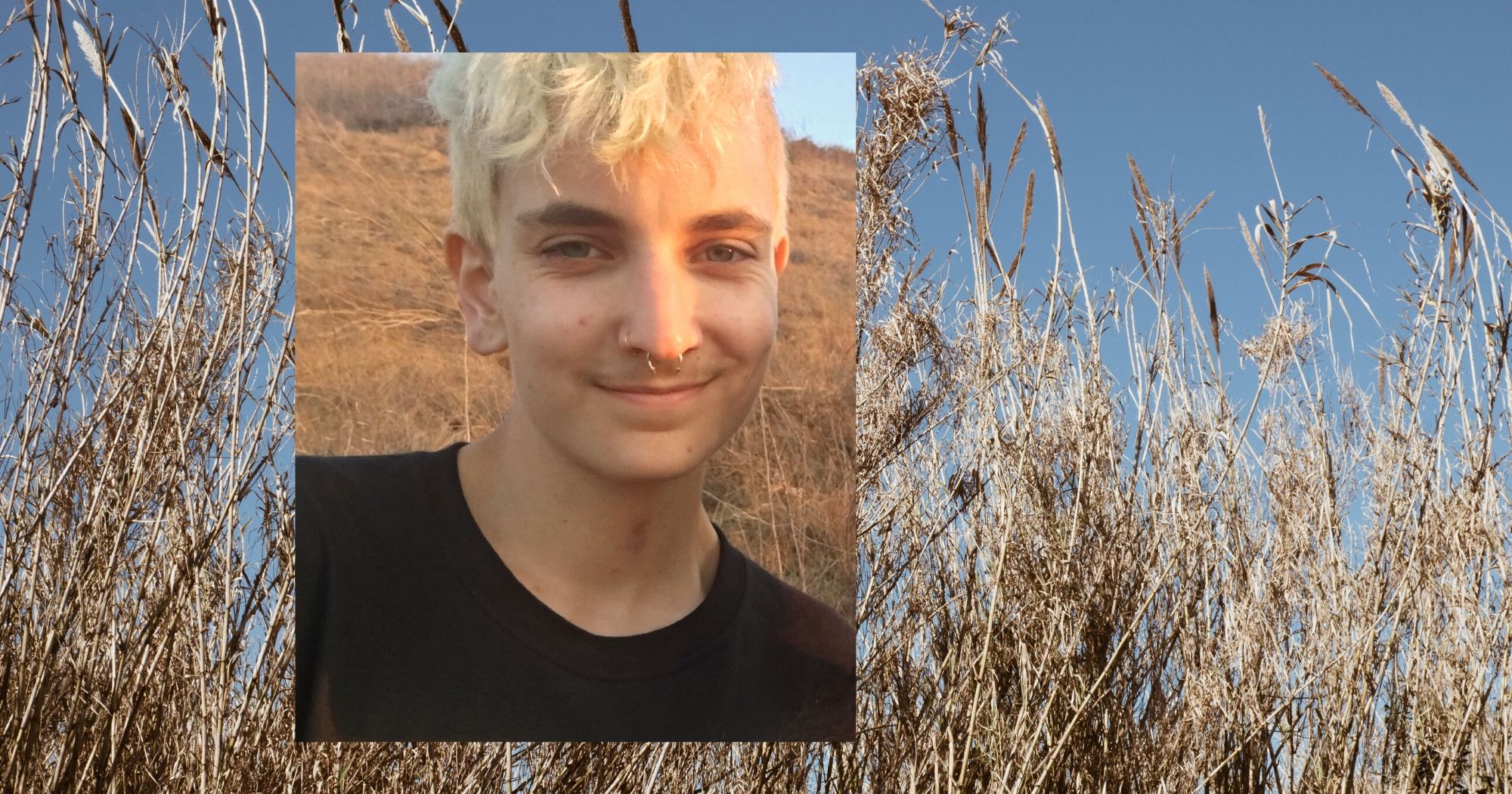 A Boy In Progress: Surviving My Eating Disorder

I hit rock bottom at the top of a roller coaster.

It was my 18th birthday.

Waiting in line, the sun clung onto my skin as I floated along in a dream-like state. We claimed our seats as a man walked over, fumbling and grunting as he tried to tighten my seatbelt. The ride tossed my body around like a ragdoll and as we crept up the top of the ride, I lost my vision. Everything was a white, glaring light.

Among the shrieking and thunderous laughter, my mind fell silent. I was convinced the sky was closing in on itself as death made its way through the clouds to greet me. I wondered if I was already gone and stuck in this gaping, luminous white light forever. After the ride came to a halt, I pried open my eyes to disintegrating fragments of light. I stood up, listlessly following behind my friends until we ended up at the food court. I stared at their food—oil seeping from crisp fries, forming pools of grease. I judged them as they savagely devoured their food, but more than anything, I envied their carelessness. 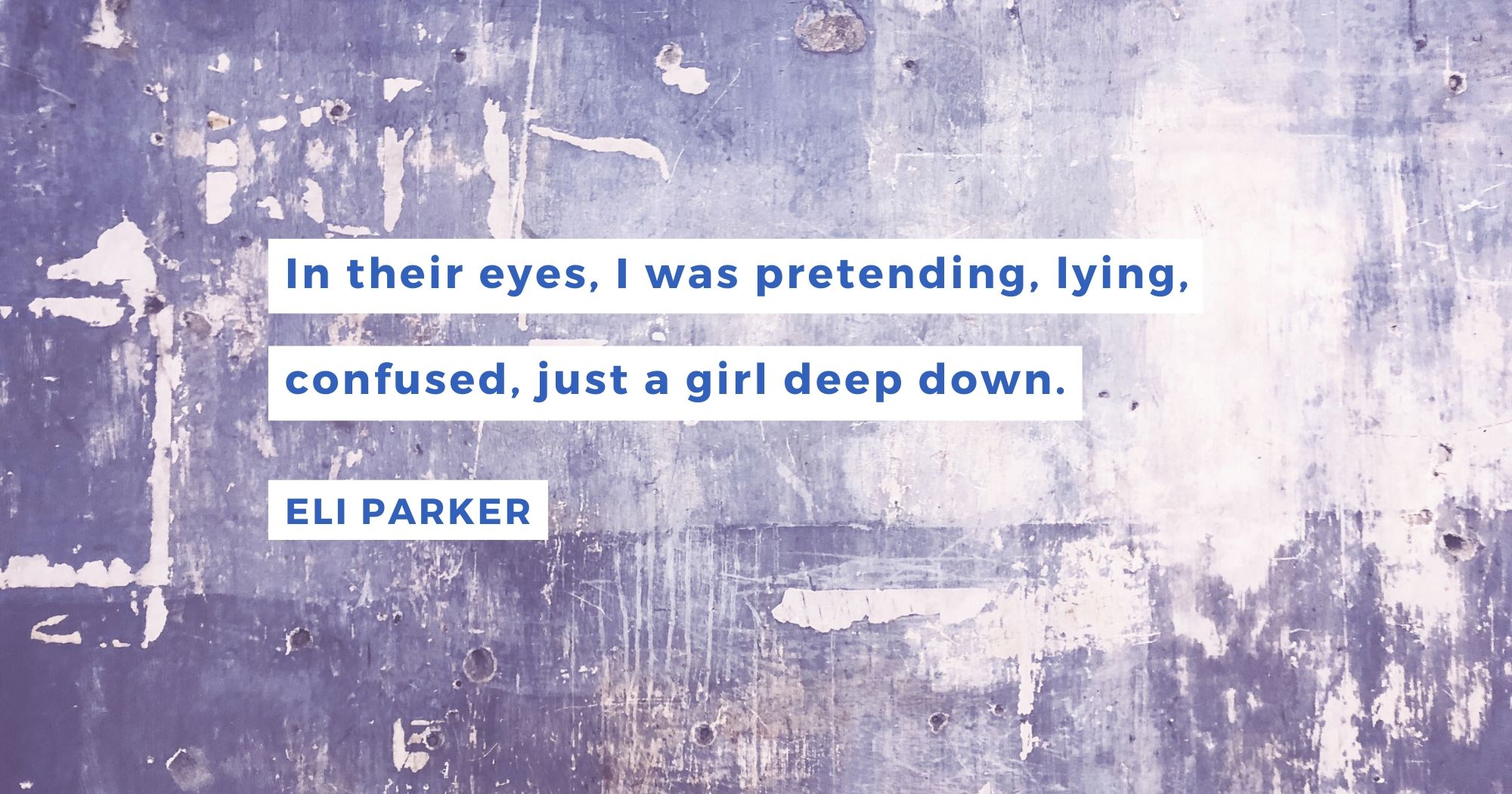 Driving home, I thought about all the birthdays that ended with the same emptiness—a reminder that no matter how much life had changed, I still hated myself. It scared me, not being able to see myself make it to 18, and now, I knew I wouldn’t make it one more year because this time, I wanted emptiness. My eyes caved, my bones jutted out, deep blue bruises bathed my body—I was dying, but this time, I wasn’t scared.

When someone made a remark about my weight, it wasn’t the words that held power; it was something that had always existed inside of me—shame. Shame was like a seed planted inside my chest as a kid when I realized my trans-identity.  I was born female and spent my entire childhood accepting that which left me with a painfully dissonant perception of myself. Growing up, puberty, relationships, sex, and school helped grow this seed, and once I came out as trans, its roots gripped onto every inch of my body. Whether at the dinner table, school, or at the doctors, conversations turned into a psychoanalysis. In their eyes, I was pretending, lying, confused, just a girl deep down. Each word from them distorted my perception of myself. I didn’t want to be told who I was anymore. I didn’t even want anyone to look at me. I was embarrassed simply from existing, so that spring before my 18th birthday, when someone told me I “gained a few pounds,” I decided to go on a diet.

I used an app to devise a weight loss plan and avoided calories like the plague. The following month was the first time I noticed a physical change in myself. I bought new clothes that fell loosely on my body, cut my hair to reveal a more rigid face, and walked with my head a little higher. I still hated how the world saw me as a “she” and I hated myself for being born that way so I held onto the only thing I could control. Losing weight made me feel powerful and no one could take that from me. That newfound control made me feel unstoppable which, unfortunately, I was.

By the last week of school, that power turned into obsession.  Everyday was a battle between me and the sun as its rays burned through the layers of clothing I used to hide my body.  I kept one granola bar at the bottom of my backpack in case my stomach growled too much. Other than that, I avoided food everywhere, even at prom when my pants fell below my jagged hips and my suit swallowed me whole . 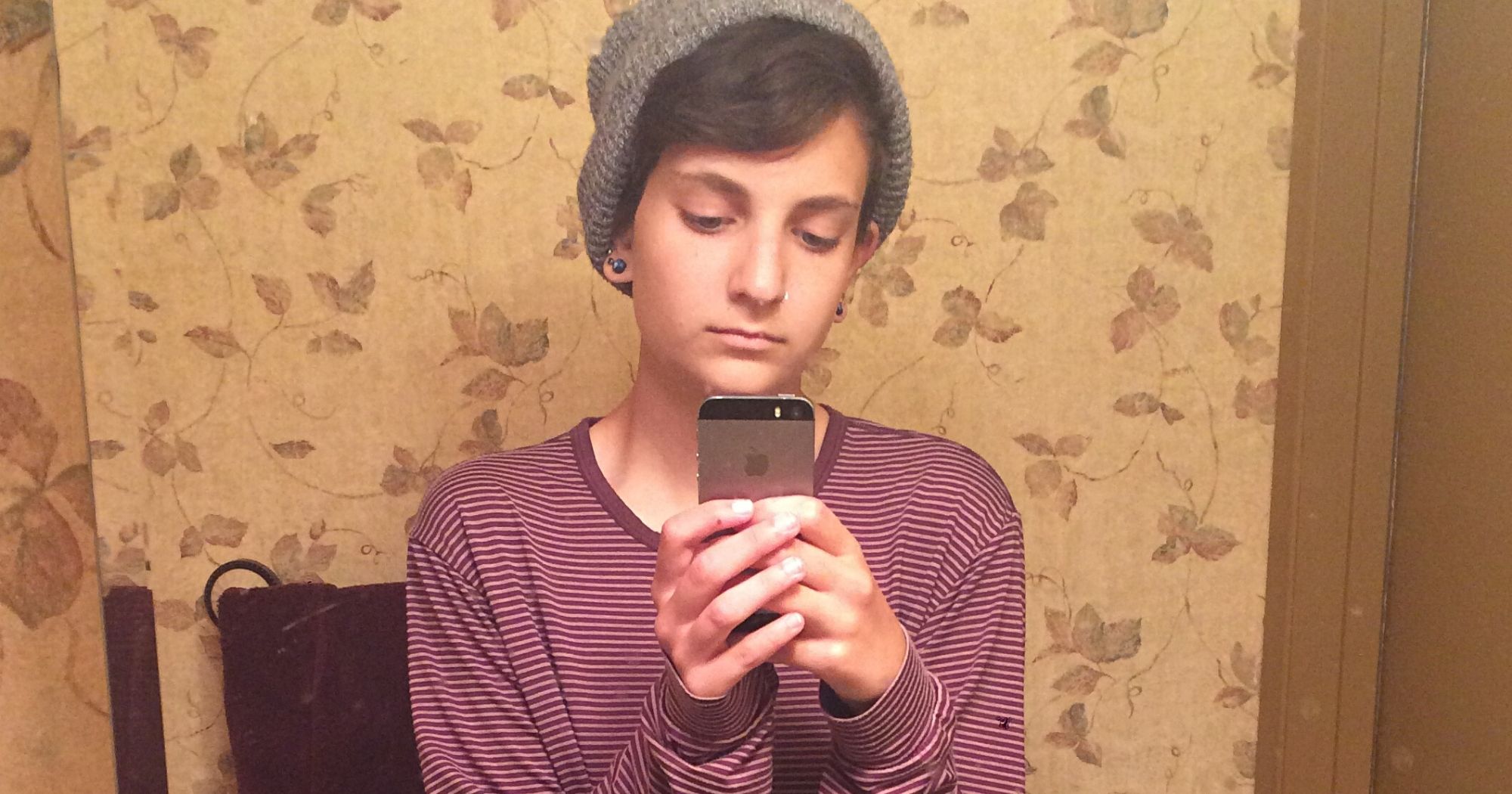 My weight plummeted more until I was staring at a foreign figure—hollow and barren.  If I couldn’t be who I wanted to be, I would be nothing.

Panic set in with the click of a seatbelt. Graduation was over, I was heading down South to visit family, and I had one thought looming in my head—I have no control.  I knew I had a problem but to me, starving felt more like a solution and I wouldn’t let anyone interfere with that.  It was difficult enough to avoid food but this was another state, with more people, and more food, but I devised a plan. I told my aunt that I was vegan along with some fabricated story that I was in recovery, needed to document my weight, and couldn’t consume much food because of my digestive system. It worked. 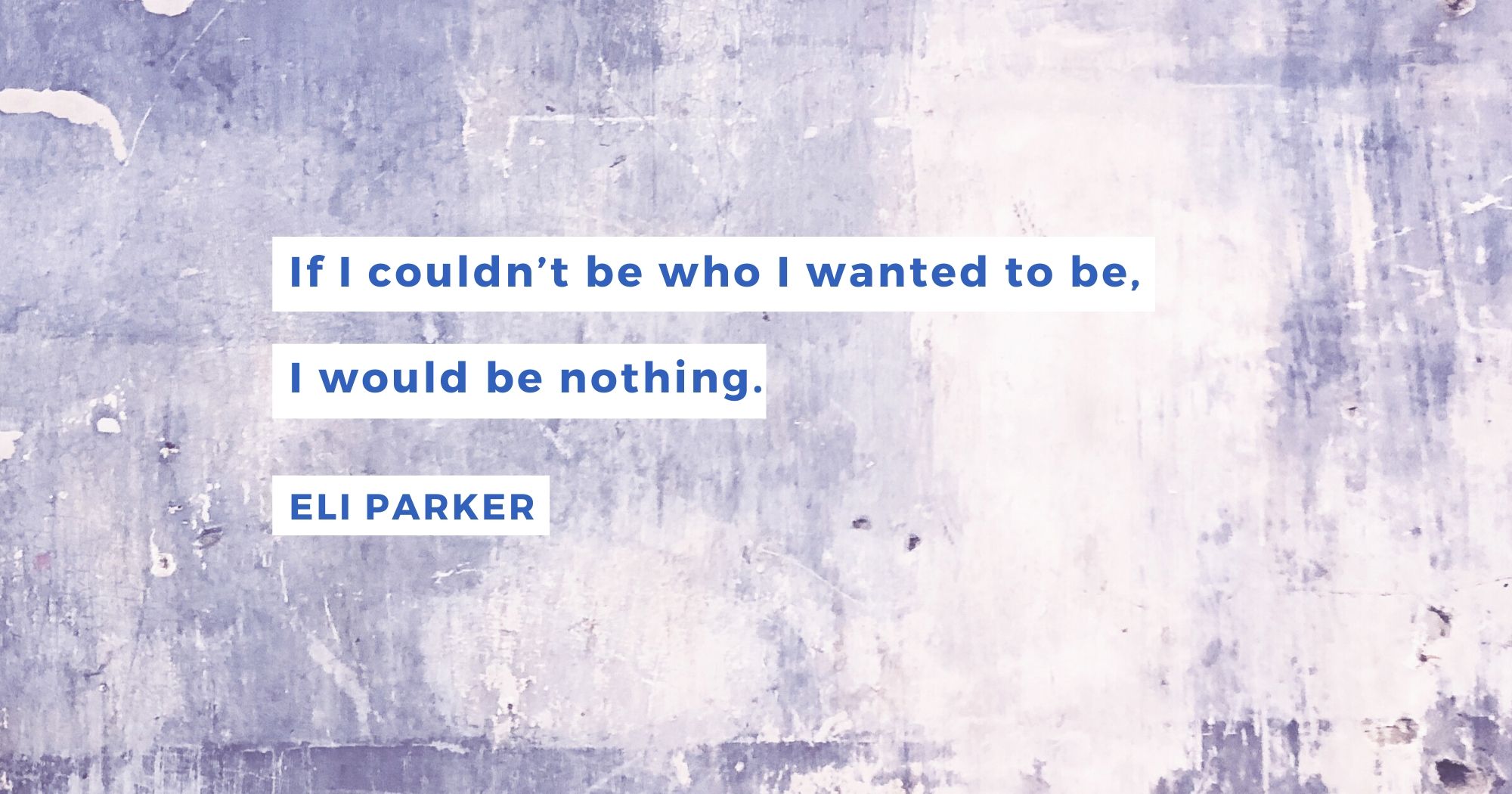 The next morning, I dizzily woke up and ate dry cereal. Then I weighed myself, finding that I gained two pounds. Panic-stricken, I kept weighing myself. I didn’t realize a scale could be broken. I was the problem and I wouldn’t let it get worse.

I was in a daze that week, pretending to eat, avoiding questions, spitting out food, and in desperation, throwing up, which left a catastrophic impact on my body. One night, my brothers made some jabs at me and set me off. All inhibitions vanished, I screamed “go fuck yourself” and ran upstairs, straight into delirium.

“No one ever wants to be around you. Learn how to be one of the guys,” my brother screeched.

I never learned how to be. For 17 years, I was busy learning how to be “one of the girls” by putting on makeup, buying a dress I’d never wear to avoid my mom’s recurrent look of disappointment. I dated boys and followed trends but it all led me here and the only way my brother recognized me as a man was in the form of spite, as a plea for me to change who I was.

Then my mother added, “Maybe you’re more messed up than I thought. You need help.” 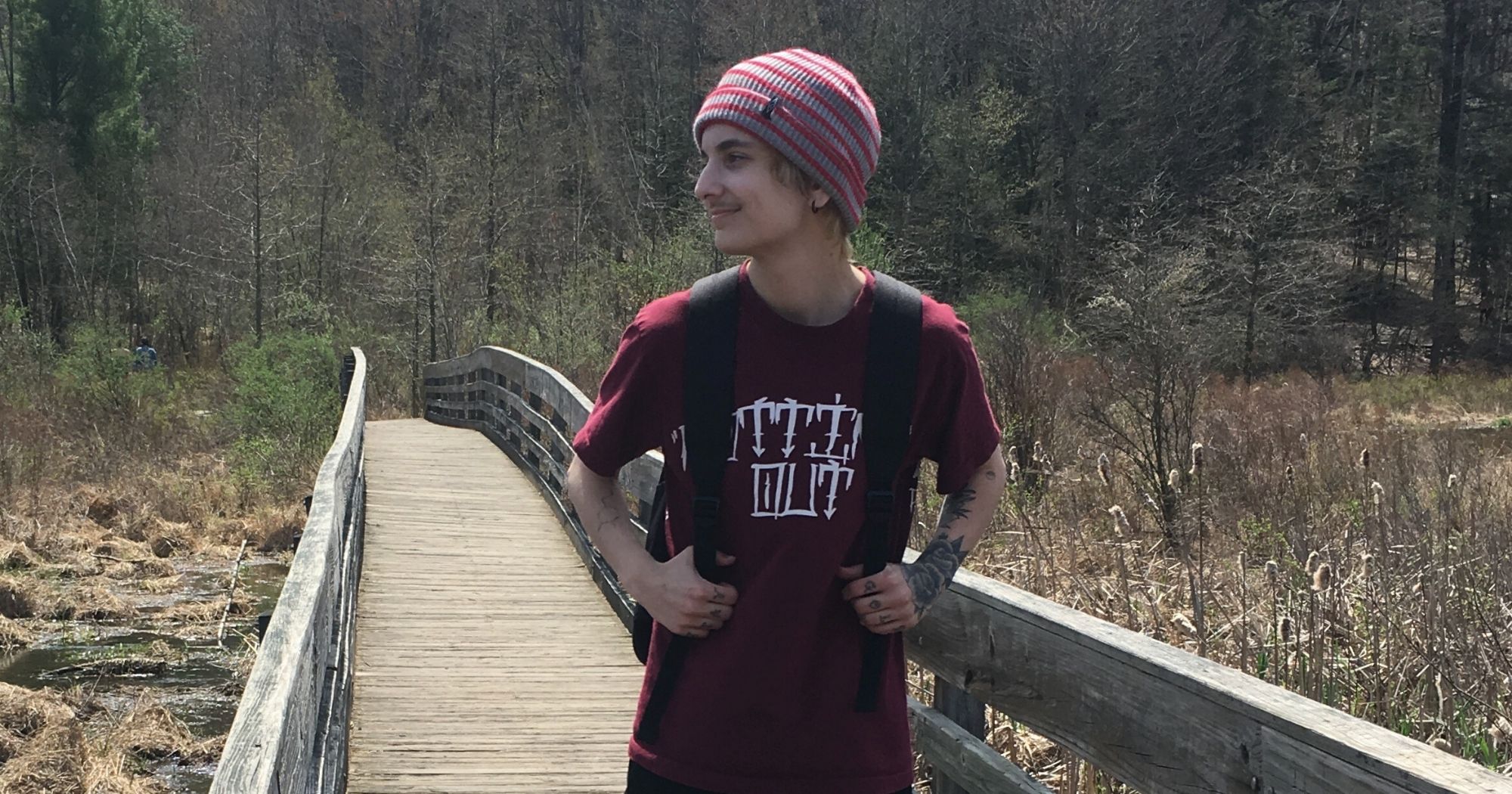 And I did. But at that moment, I just wanted her to hold me like a child, like I never hurt her, like I still had a chance, like I still deserved that chance, but all I had was silence.  I got home and crawled into bed after three days of fasting. I couldn’t feel my heartbeat. There was no life inside of me. I was finally scared, but not enough to change.

A few weeks later, I sat at the edge of the table eating food my grandma secretly spiked with vitamins.  She told me a story about her coworker.

“She’d sneak off to the bathroom and come in looking sicker every day until she stopped showing up.  Her mother called to tell us she passed away.” 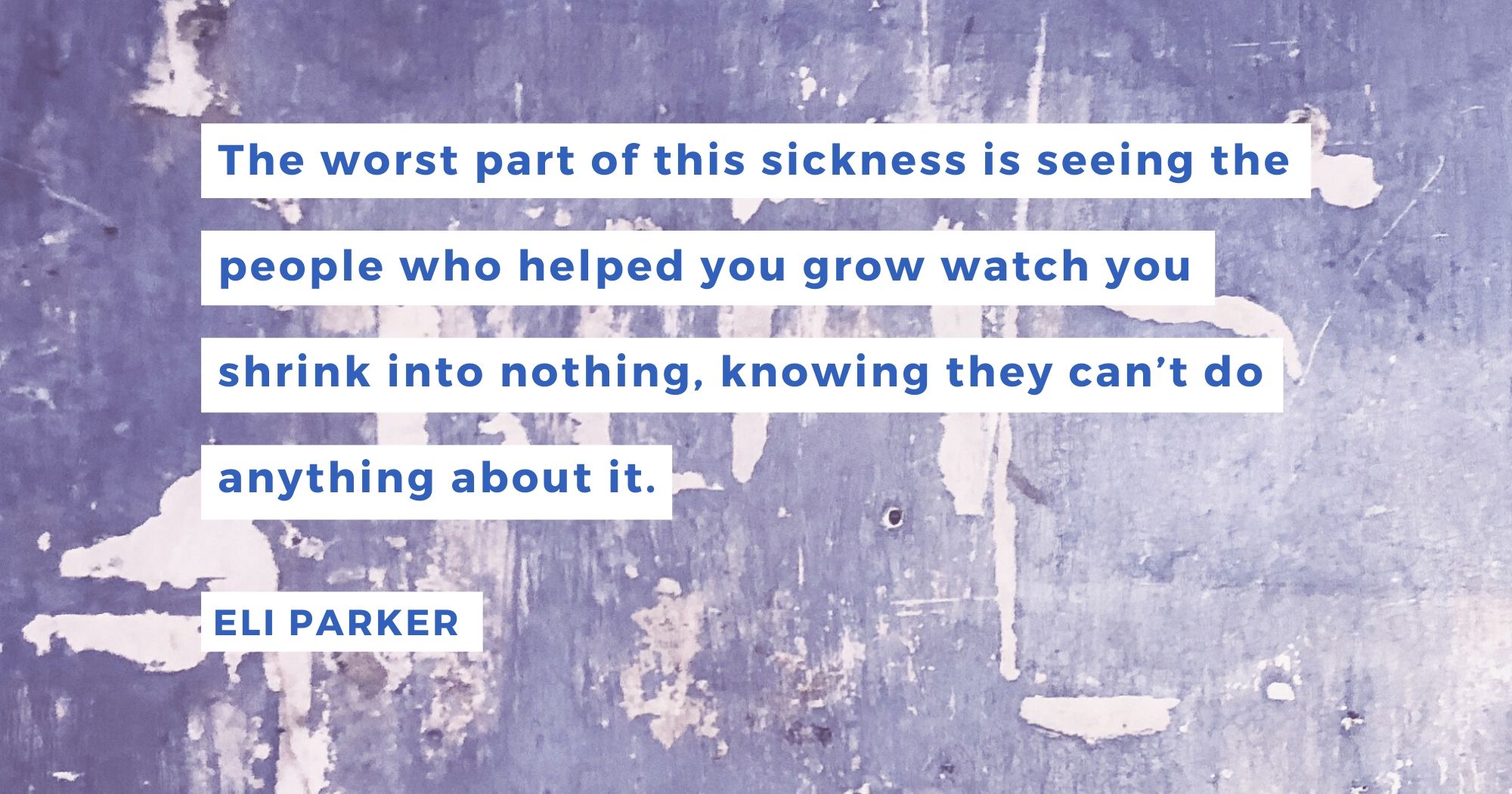 The worst part of this sickness is seeing the people who helped you grow watch you shrink into nothing, knowing they can’t do anything about it. I took refuge in letting myself die but sometimes, it just hurt.  Listening to that story hurt the most because my grandma was there for me when no one else was, and she had to be afraid because I wasn’t.

It’s easy to fake recovery when your therapist’s efforts include providing quinoa recipes and empty threats of hospitalization. It’s not easy when you start throwing up blood. It’s definitely not easy when you meet someone who sees right through you and I did months later—he was 19, also trans, and now one of my best friends.

“I barely ate the whole summer.  I didn’t give a shit about myself.”

But he was alive. How?

“Do you wanna take testosterone?”

Like me, he was scared but now, he was alive. 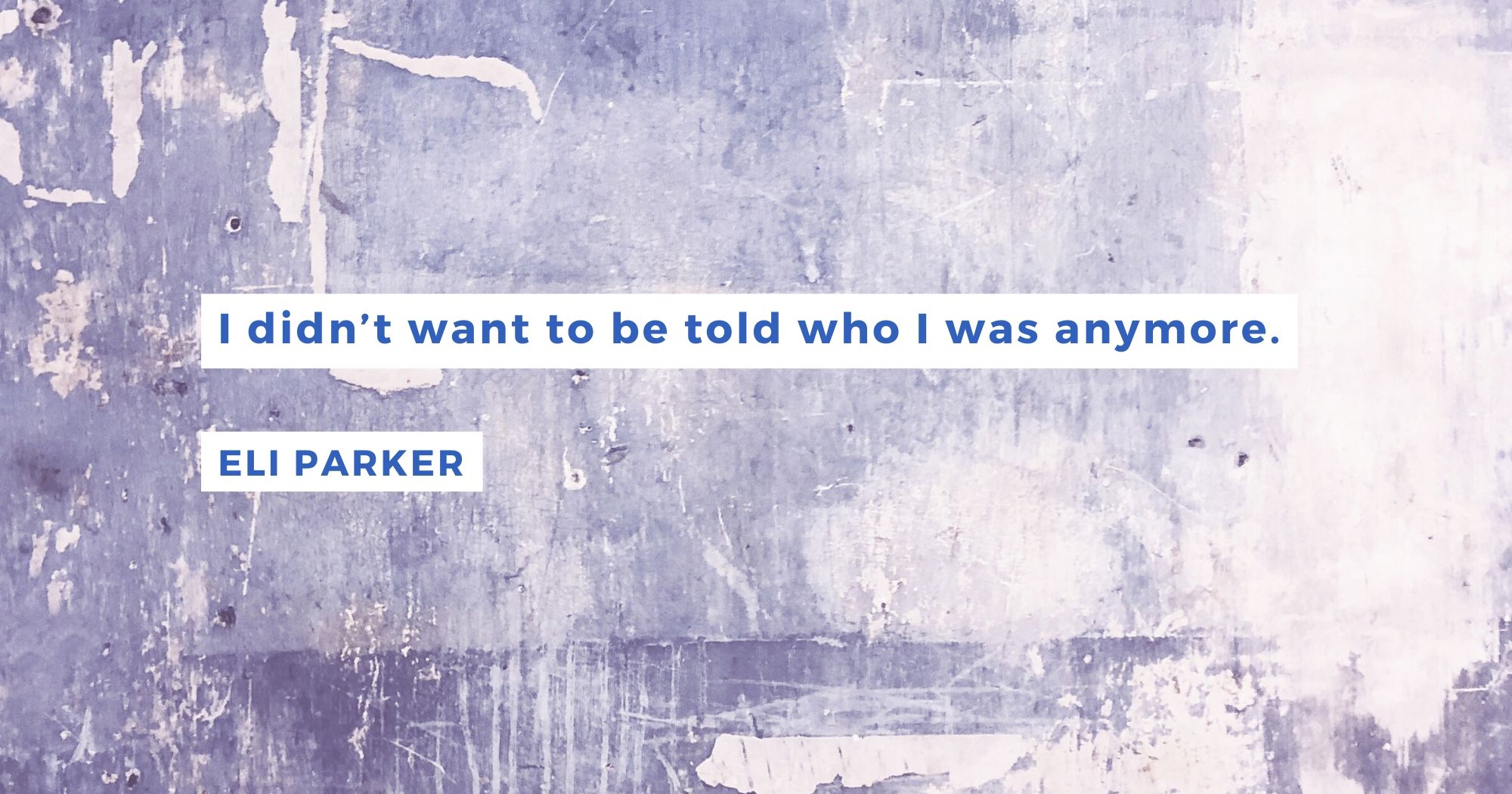 “It’s like puberty—awkward and uncomfortable but you start to grow into yourself.  It wasn’t a miracle drug but I figured it was my last chance.”

He was dying but now he wasn’t.

Digging a needle into my leg wasn’t recovery. I still felt worthless without my disorder. I had to think about things besides starving myself. I had to watch my bones become less visible and watch the life return to my face. I had to stop dying and be okay with it. 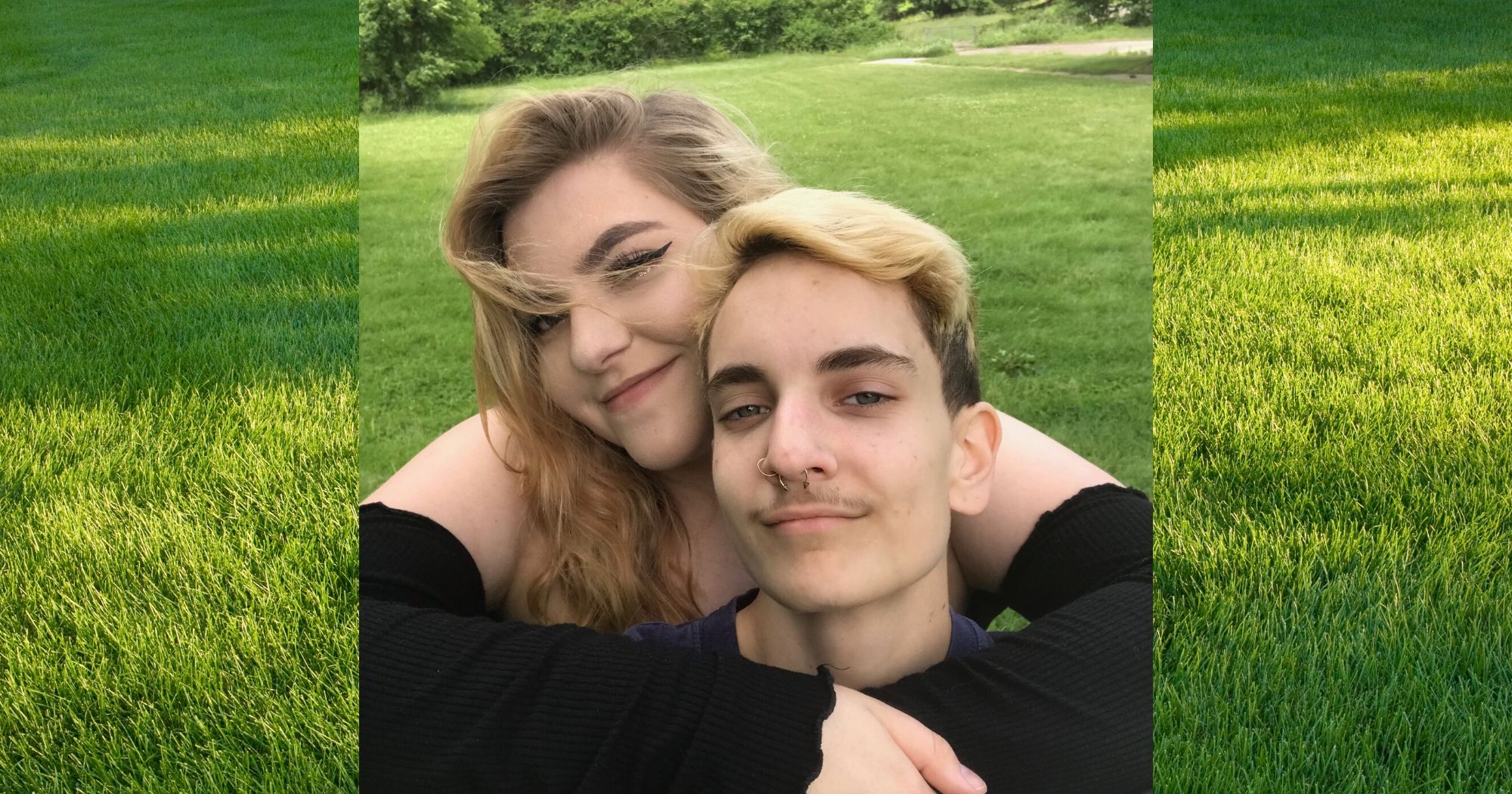 Some days I’d stay on the bathroom floor throwing up for hours before desperately googling treatment centers but the only available program required me to be about ten pounds lighter. Instead of risking death in the name of my hospital’s arbitrary guidelines, I applied for a job. I dragged myself to that interview looking like a lost sickly child. I forced myself to get out of bed that day and every day after that. I learned how to talk about things other than starving myself. I reminded myself that change doesn’t happen overnight every time someone called me “she.” I developed an appreciation for soccer moms yelling at me for their coffee because it meant I wasn’t at home letting myself die. It’s the little things.  As I dug that needle into my leg, I salvaged a piece of myself under all the carnage and began to rebuild from there. I began destroying my disorder and more importantly, the shame that created it, the shame that kept me from embracing myself. I’ve gotten to know myself and in the process, to love myself—that power has made me the freest I’ve ever been.

Eli is a 20-year old from New York currently studying psychology and politics. He’s passionate about writing and various artistic mediums, which he uses to express myself and, hopefully, connect with others. Creating is the only sense of peace he can find in a world that confuses him more and more each day. So far, he has published a collection of poems in 2017 and is currently working on some writing and multimedia projects. Check him out on instagram: eli.tism.

Hannah Rose Preikschat shares what it's like living with obsessive compulsive disorder, and more specifically, life with Pure O, or harm OCD.