A summer afternoon a few years ago, I was dozing on my parents’ couch after a morning at the beach. I never answer other people’s phones, but mom and dad were napping when their landline rang and woke me from my slumber. I picked up and heard my uncle’s shaken voice on the other end of the line. He rarely called, so that was unusual.

My uncle was the quietest and most reserved of the five siblings. He lived in a small city about two hours away, and as a true introvert who had led a difficult life, he preferred the company of his animals and keeping to himself.

Surprised by the call, I greeted him cheerfully, and he asked to speak with my dad, his brother. I said Dad was taking his usual afternoon nap and I’d have him call back once he woke up. But instead of saying “okay,” he said I didn’t need to do that and asked if I could tell dad this when he woke up:

That he loved us all very much and was sorry for all the pain he had caused. 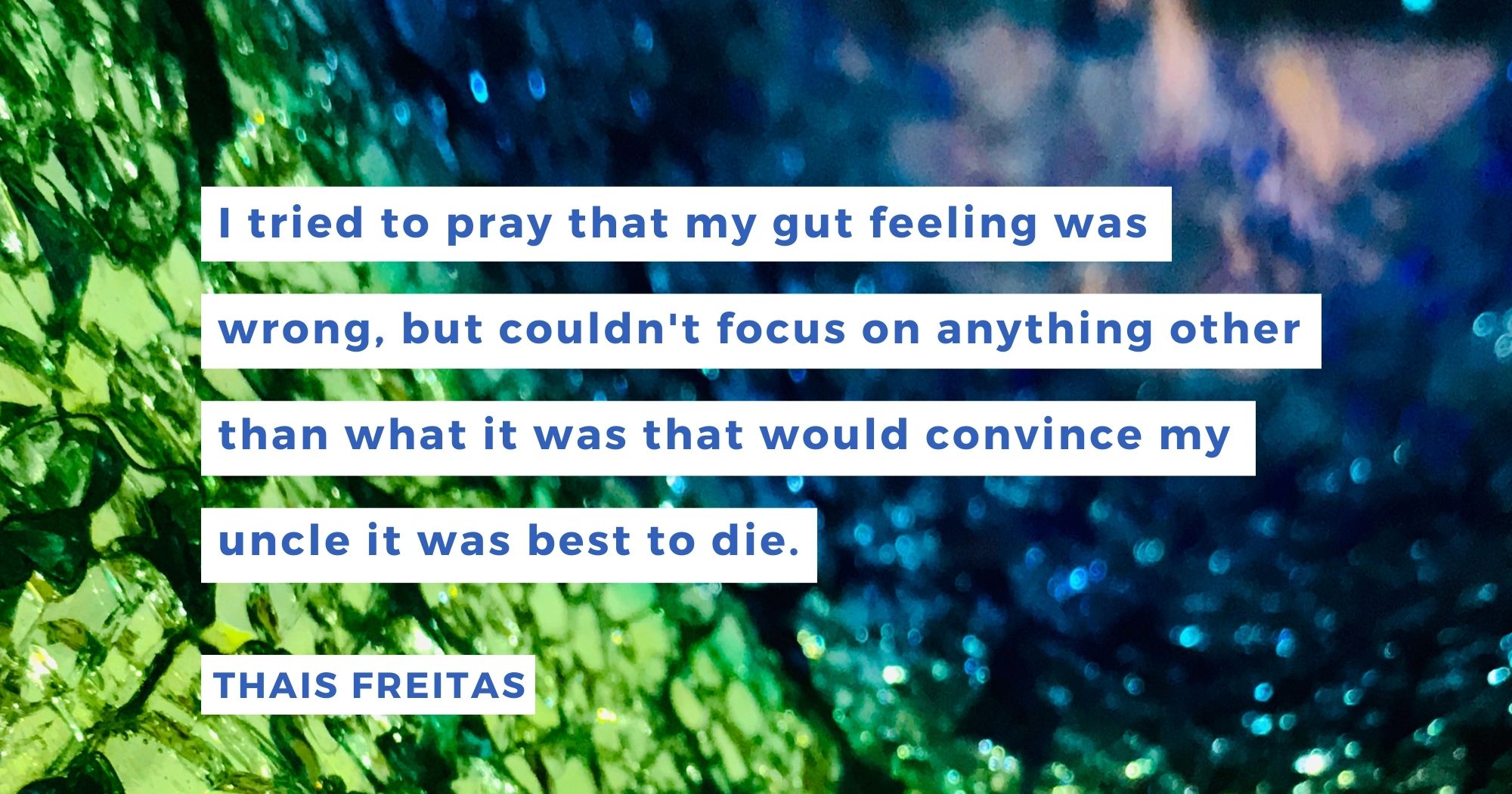 Still sleepy and slow from just waking up, I managed to murmur an “okay,” and he hung up right away. I put the phone back on the hook and sat there for a few seconds, blankly looking at the TV screen, trying to process what had just happened. That was a heck of a strange call, especially at that time of the day—when he knew the weekend siesta was a family tradition—and to leave such a cryptic message. Then I started thinking and remembering that:

​Putting two and two together, I realized those were all warning signs of suicide. That sounded like a goodbye message, and I was immediately startled. I went to my parents’ room and, shaking dad’s foot, and said:

Dad had had a couple doses of vodka over lunch, so he woke up even more confused than I was, and asked, “what?” At that point, mom was also awake and staring at me.

“Uncle Rick just called; I said you were sleeping and would call back. He said you didn’t need to and asked me to say that he loves us and is sorry. That sounded like a goodbye message. I’m worried, do something,” I said quickly and nervously. 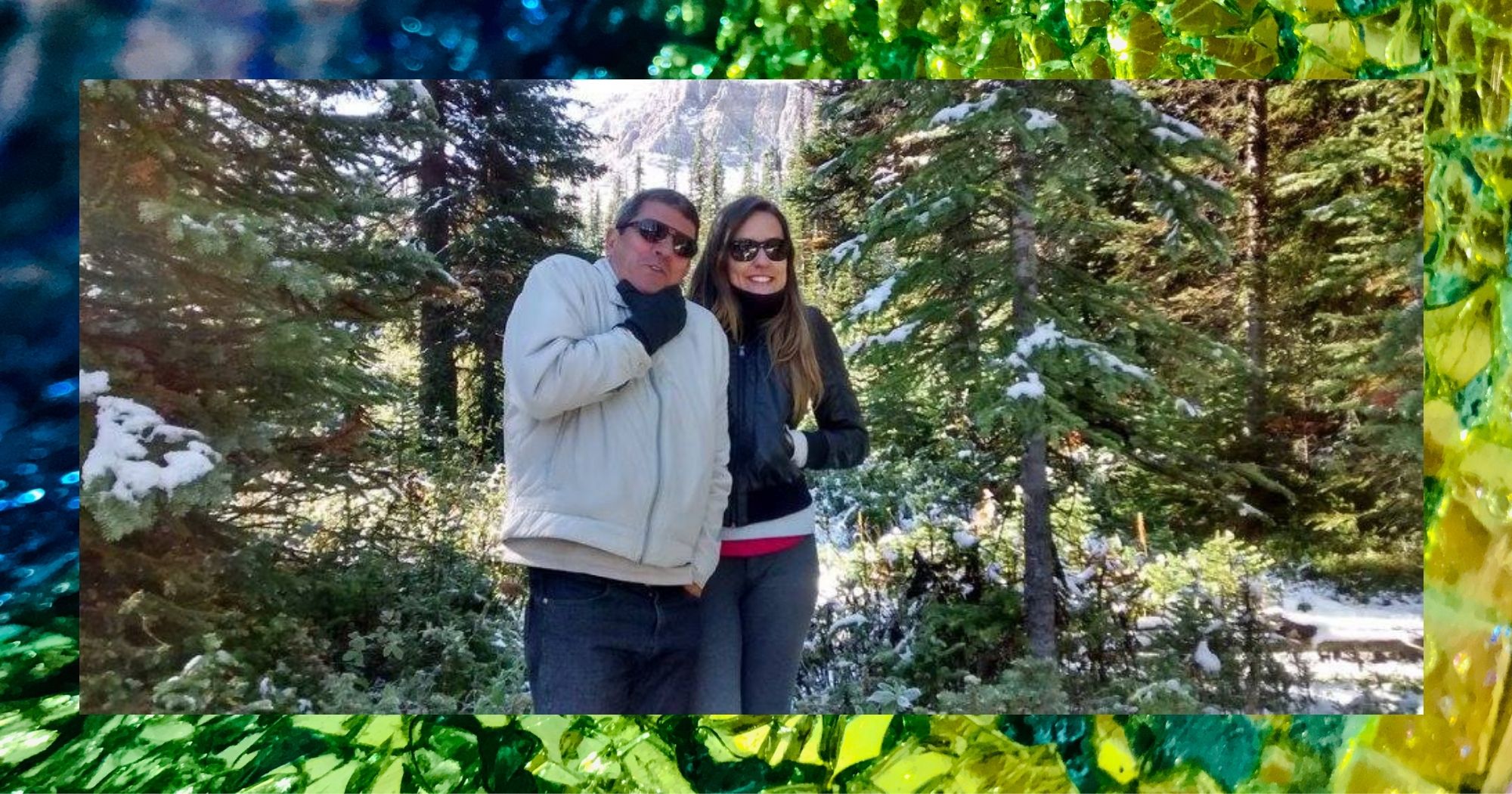 Dad, knowing Rick, got up immediately and called their big brother, Luiz, who lived near him, asking if he could check on Rick. He said he’d do it immediately and get back to us. A little relieved but still puzzled, we sat in the living room looking quietly at each other, not knowing what to think or expect. During those minutes that felt like an eternity, I tried to pray that my gut feeling was wrong, but couldn’t focus on anything other than what it was that would convince my uncle it was best to die, what was it that he needed so badly and none of us had helped him with.

In what I believe was an hour later—time felt like a blur—Luiz called us. He had gone down to Rick’s place, which, by that time, was my grandma’s basement. No one answered the door, but Luiz heard something inside and decided to break in. When he did, he found his little brother hanging by a rope around his neck, unconscious but still alive. He called 911 and, in minutes, an ambulance came, the paramedics revived Rick and took him to the hospital. 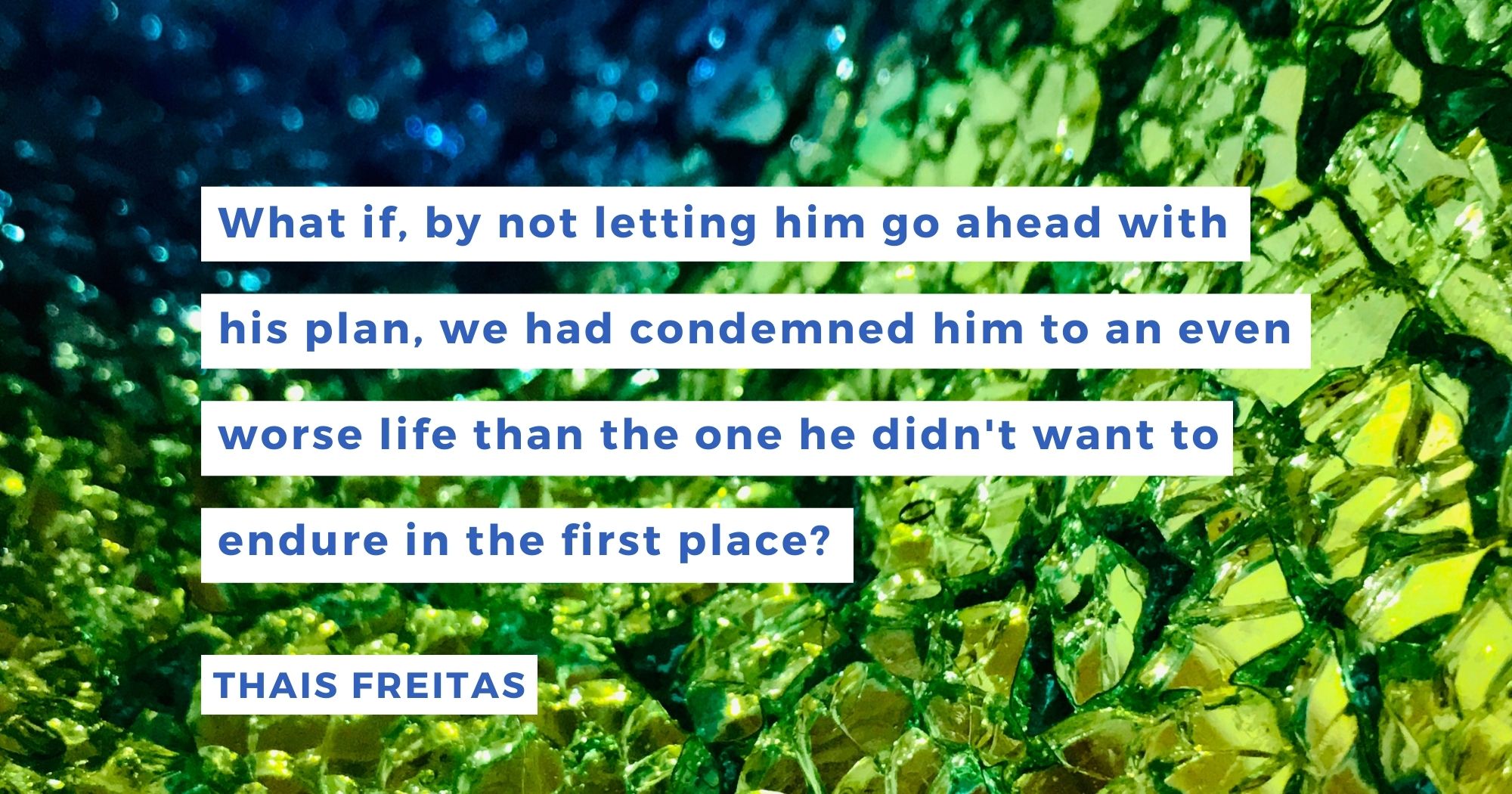 ​In the frantic attempt to get the rope off his neck, the paramedics ended up breaking some of his teeth and leaving him with bruises, but Rick was alive, in an induced coma recovering in the hospital. Now we’d have to wait and see what he would be like when he woke up. Would there be any consequences? What would his brain be like after being deprived of oxygen for God knows how long? What if, by not letting him go ahead with his plan, we had condemned him to an even worse life than the one he didn’t want to endure in the first place? 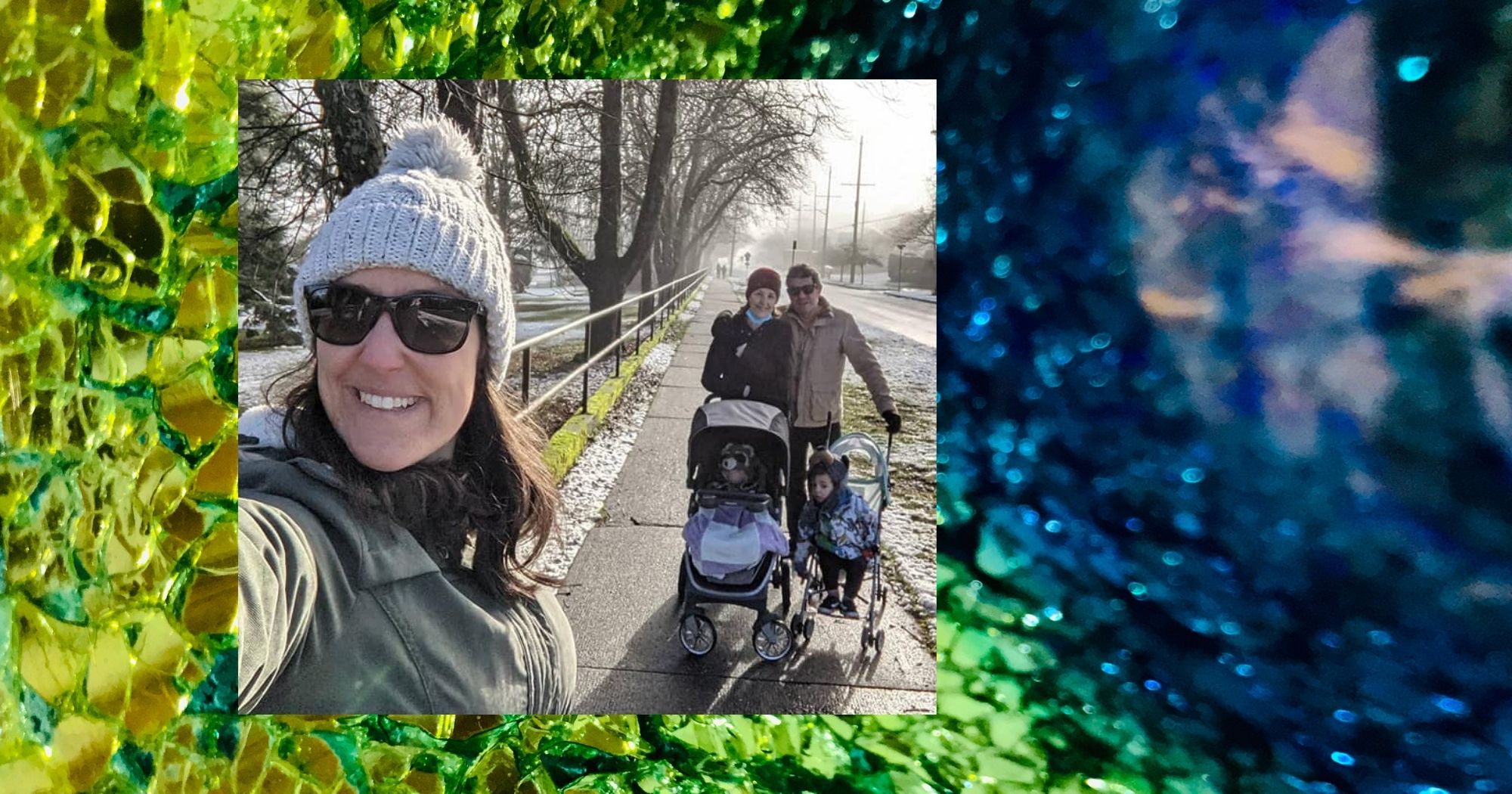 My thoughts about my uncle’s torment were joined by memories of his life and my own experience of growing up in a family where we both always felt like outsiders. Like Rick, I was so different from everyone in my dad’s family, and they were always so judgmental and critical of everything I did: “you need to be more outgoing, why aren’t you like your cousin?”, “your parents won’t give you a sibling, that’s why you’re like this”; “when are you going to grow up, get your buck teeth fixed, look better?”

I felt like there was this invisible barrier that wouldn’t let me be myself and get closer to my relatives. Even with my dad, whom I love dearly and who’s always been the most devoted parent, I could never find a way to build a close connection. Since Uncle Rick had always been the quiet one, the weirdo in a family that loved to party and be loud, so I felt closer to him than anyone else, even though we never exchanged more than a few words when we met. 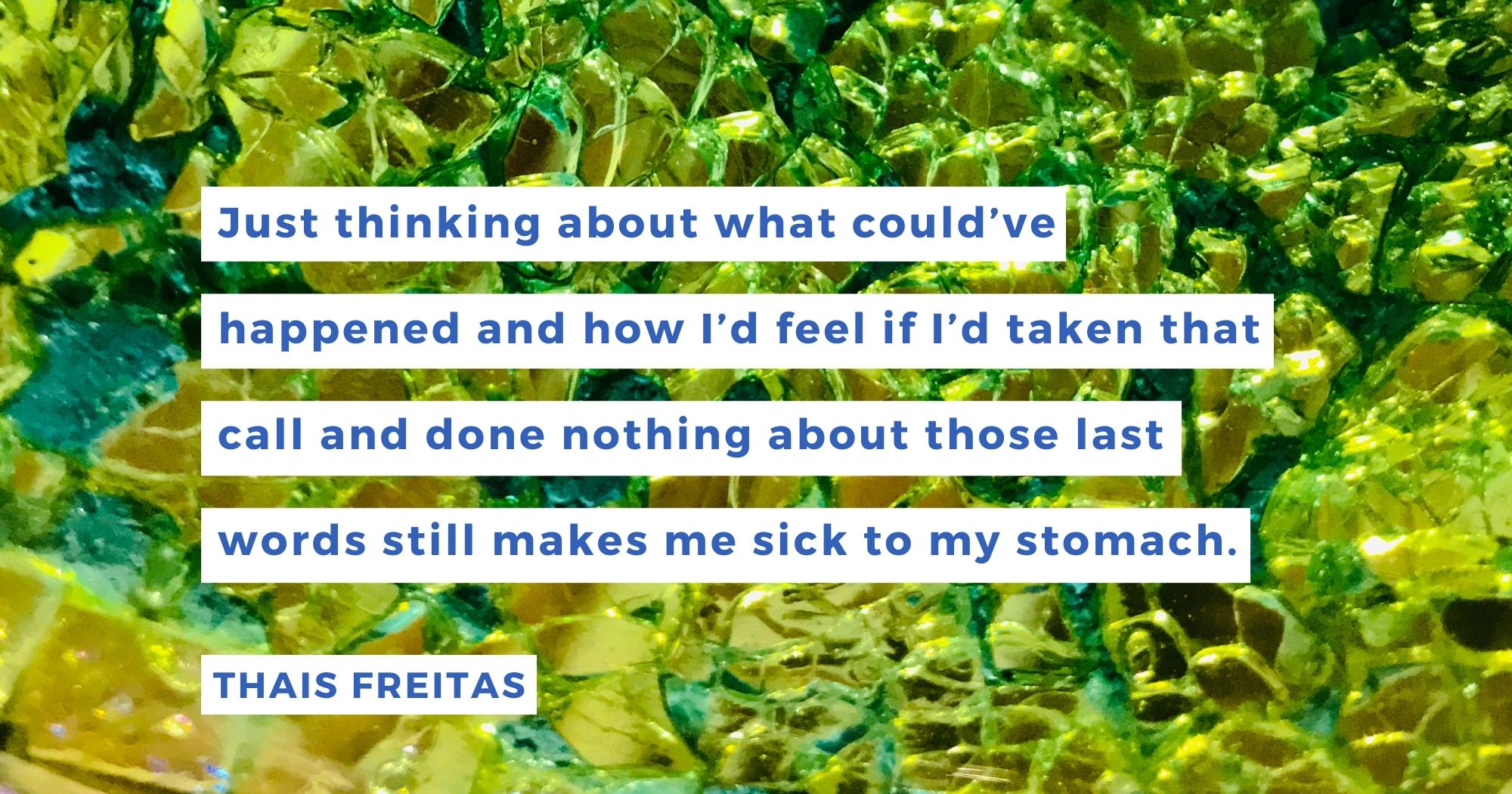 Uncle Rick and I both loved dogs and animals in general, being into nature, writing, and staying quiet and observant in a world full of noise. We had similar tastes, and I was fascinated to find out he had a room full of books written by Jack Kerouac, Allen Ginsberg, and other beatniks right when I was at the height of my obsession with the Beat movement in my teens. He didn’t complain and even seemed proud when 14-year-old me ravaged through his little library, taking all his precious old books, many of them with notes from deceased friends on the back cover and old pictures lost inside. Books that have helped shape who I am and connect with a sensitive, troubled relative with whom I’d never really had a real conversation.

So when I answered his call that summer afternoon, it was through that unlikely connection that I somehow sensed that my uncle wasn’t doing well and something dark was going on. For a moment, I hesitated between waking my dad or simply dismissing the call as part of my uncle’s erratic behavior. I’m glad I didn’t. I’m glad I knew the suicide warning signs and that we all acted quickly enough so that he is still alive and doing much better now, living in a cabin in the woods with his dogs.

​Rick has learned how to keep bees and is taking great pleasure in teaching native beekeeping to vulnerable youth in his rural town. Weeks ago, he posted a selfie taking the second shot of the covid-19 vaccine in our family’s group-chat, saying he was feeling safe now and looking healthy, happy, and like someone who isn’t planning to leave this world anytime soon.

As for me, I still have a lot to process about what happened that day, what could’ve happened, the trauma it caused, and how scared I still feel when the phone rings. Most of all, I’m grateful that I recognized what was going on and acted on it—just thinking about what could’ve happened and how I’d feel if I’d taken that call and done nothing about those last words still makes me sick to my stomach. 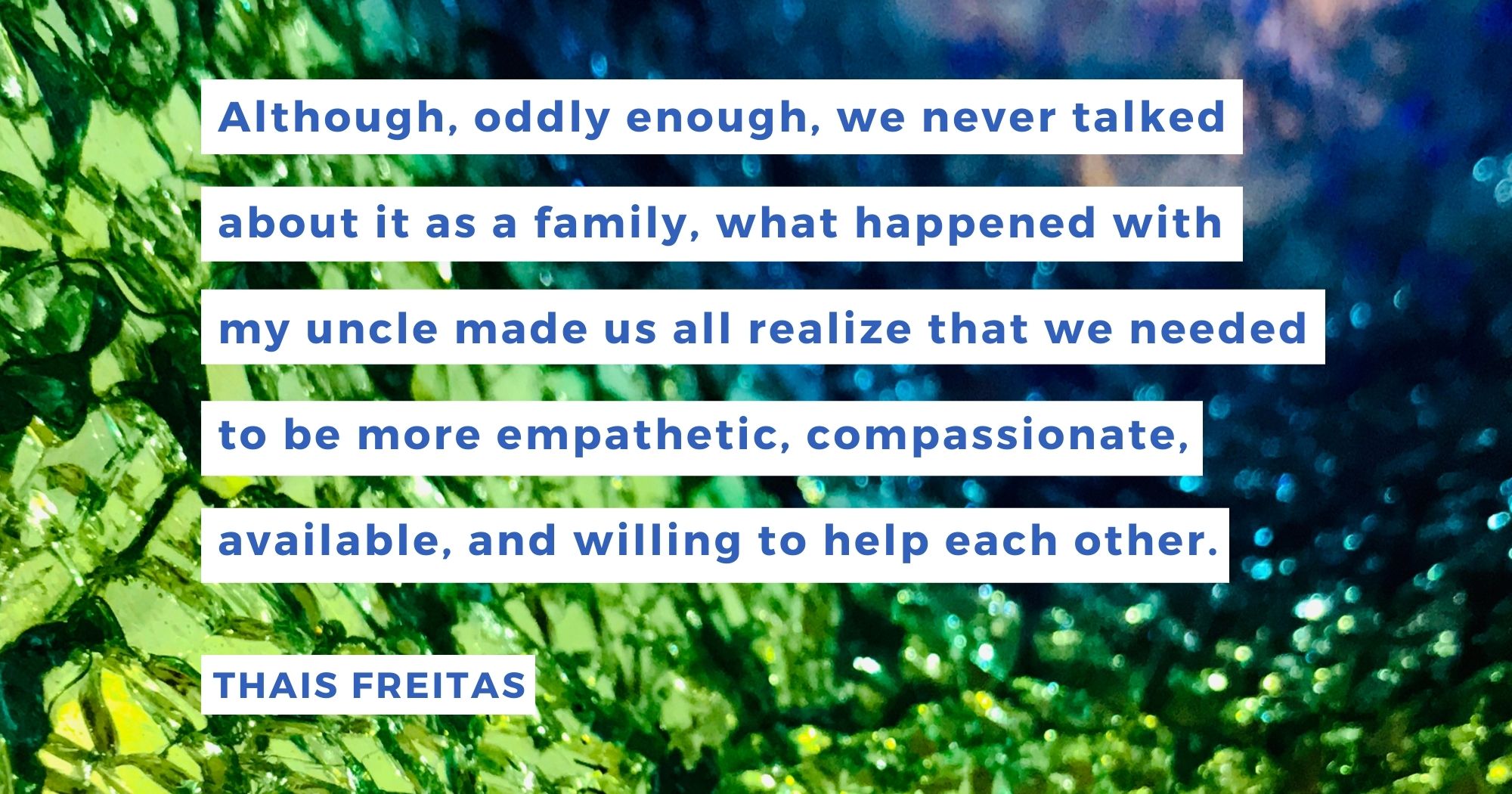 Since then, I too, have struggled with my bouts of depression and suicide ideation—it runs in both sides of my family (yay!)—but I’ve learned that if I write down my feelings, open up to close friends, and take the meds my doctor prescribes, I can keep those demons at bay and remember it’ll get better when everything feels like too much to handle.

Because of all the judgment in my childhood, I still have a hard time breaking down the barriers and getting closer to this peculiar family I’ve heard so many stories about. Several years have passed and I now live halfway across the world, but somehow I feel like I’m much closer to my relatives than when I lived nearby. Although, oddly enough, we never talked about it as a family, what happened with my uncle made us all realize that we needed to be more empathetic, compassionate, available, and willing to help each other—a vow I made that summer day long ago and one that I hold dear in my relationship with my children and everyone around me.

I’m sharing this story to remind you of the importance of recognizing the signs and being open and sensitive to the people around you—it can mean the difference between life and death. And of how important it is to understand that everyone is facing their own demons, and that we need to build bridges and help each other before it’s too late. 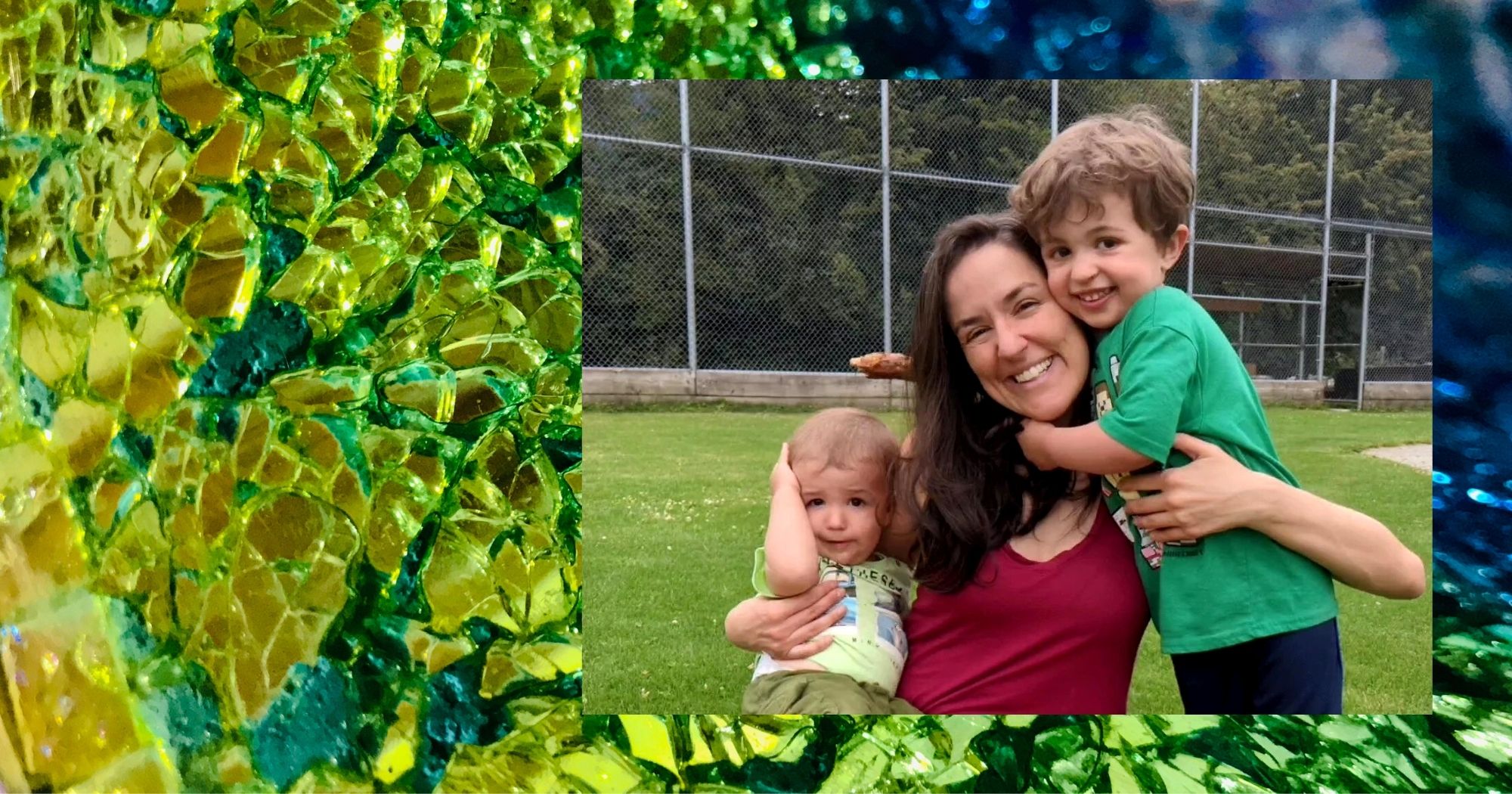 Thais Freitas is a marketing and communications professional living in Canada. An avid storyteller, she’s passionate about helping non-profits, small businesses and social entrepreneurs share their mission and connect with their audience through powerful stories and honesty. In her free time, she loves exploring the beautiful outdoors of British Columbia, playing with her two young sons, and sharing her learnings, experiences, and thoughts on her website thaisfreitas.com.