A Mental Health Advocate Sends Love and Light to the World 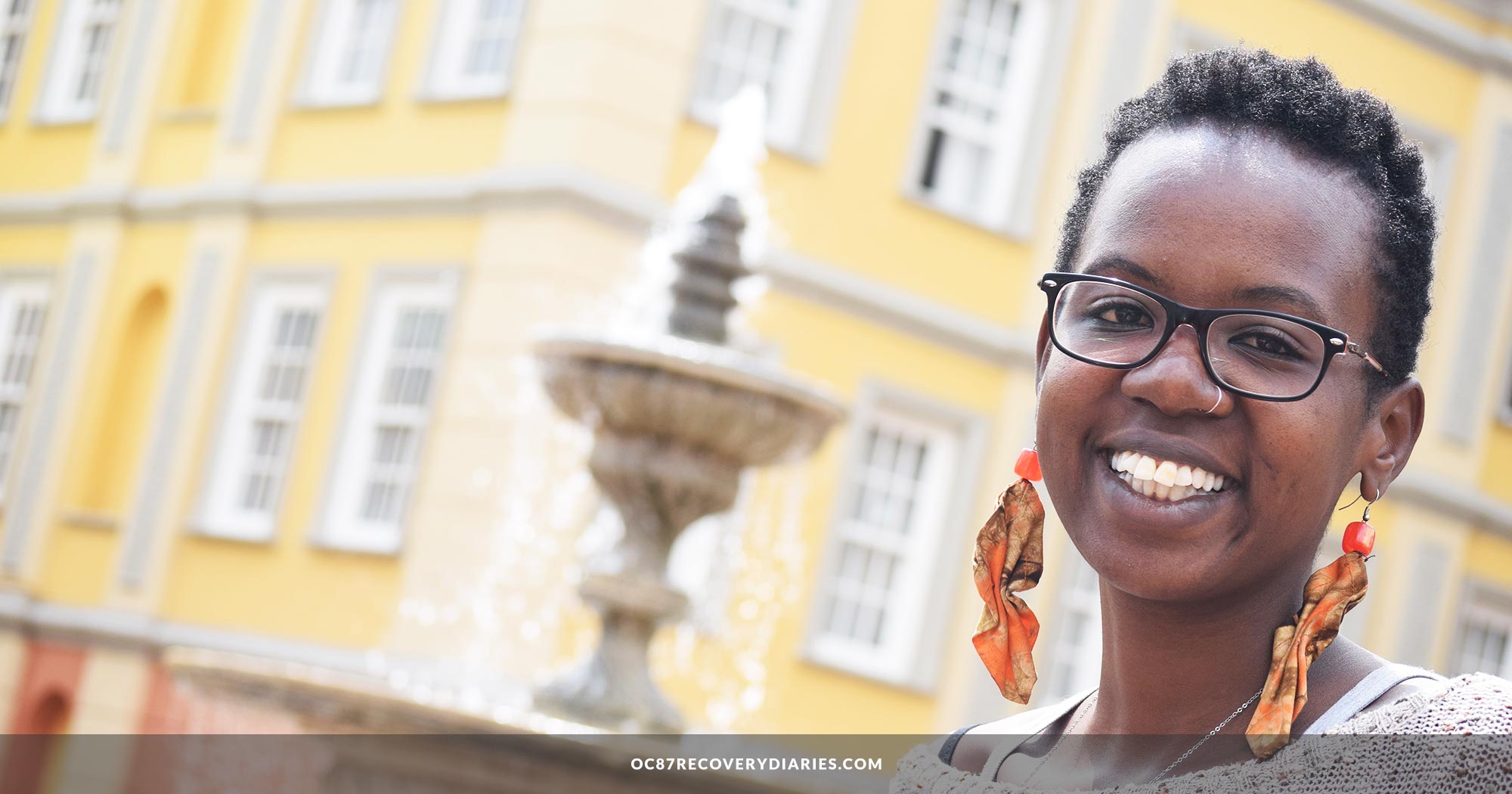 A Mental Health Advocate Sends Love and Light to the World

My name is Sitawa Wafula.

I am from a small town 40 Kms from Kenya’s capital called Ngong.

As a kid, I never envisioned myself getting into this line of work. In those early days, I did not know about blogging or mental health. I was sure I would end up doing something that involved Mathematics, but life had another script for me.

My childhood was like that of any other child in middle class Africa in the 90s. We lived in a nice neighborhood, my parents took my brothers and I to good schools. However, things changed when I turned 17. I had my first seizure while in my final year of high school and was diagnosed with epilepsy. This was something new to me and my family, as was the stigma around it. I was once fired from a job I got after I dropped out of University when I had a seizure and fell on a client. A lot of people believe it is contagious, others see it as a curse or caused by an act of sorcery or witchcraft. 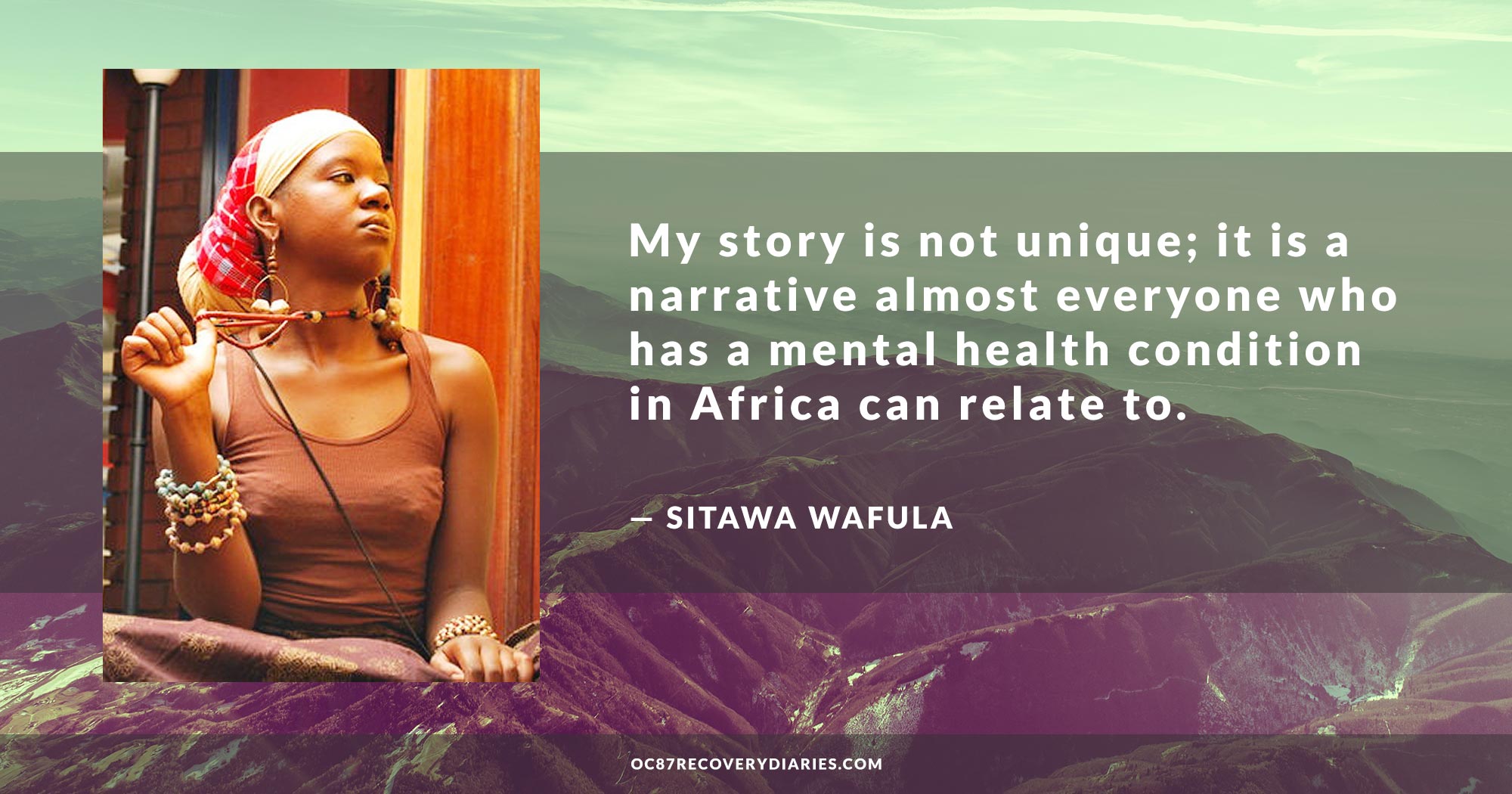 As we were still coming to terms with my epilepsy, something else happened; something that changed the course of my life forever. I was sexually assaulted by someone I knew. I remember the date as if it was yesterday; Sunday 15th June 2003. I was 18 years old, just fresh out of high school, eagerly waiting to join University; I had been accepted in Actuarial School at the University of Nairobi.

I get chills every time I mention this ordeal, I cry at times but I made a vow to myself that I will keep mentioning, not because I have become numb to the ordeal but because when I was assaulted; I didn’t know what to do or not to do, I didn’t know where to go or who to talk to and needed a story to lean on, I needed to know that someone somewhere was sending me love and light.

Growing up, I had rarely heard or read about sexual assault. The most I had heard were whispers that it might be the woman’s fault. The questions always asked were; what time was it; what was she wearing; what did she do to provoke the man?

So I kept the ordeal to myself and rested on the fact that I was going to Actuarial school in a few months and all the calculus and statistics ahead of me would clear my mind off everything.

I joined University but I could not concentrate, I struggled through the one and a half years I was there. The unchecked trauma from the ordeal was later given a bipolar diagnosis; a mental health condition that saw me drop out in my second year. Again I found myself in a space where people only spoke in whispers and what they said was that it was as a result of witchcraft or a curse from God.

When I got my diagnosis, it was the first time I got to hear about bipolar. The psychiatrist only gave a diagnosis, a prescription and a date for the next appointment. He did not explain the illness clearly nor mention the side effects of the medication and there wasn’t a narrative I could lean on or relate to.

My story is not unique; it is a narrative almost everyone who has a mental health condition in Africa can relate to. The wider community is scared of mental health issues and so surround it in myths or silence, and a lack of support structures and proper information have made manageable conditions like anxiety and depression become disabling.

When you Google mental health in Africa, you will see crowded hospitals with no beds or if there are any beds, people are chained to those beds or on trees in the homesteads of those who live far from the very few available hospitals. 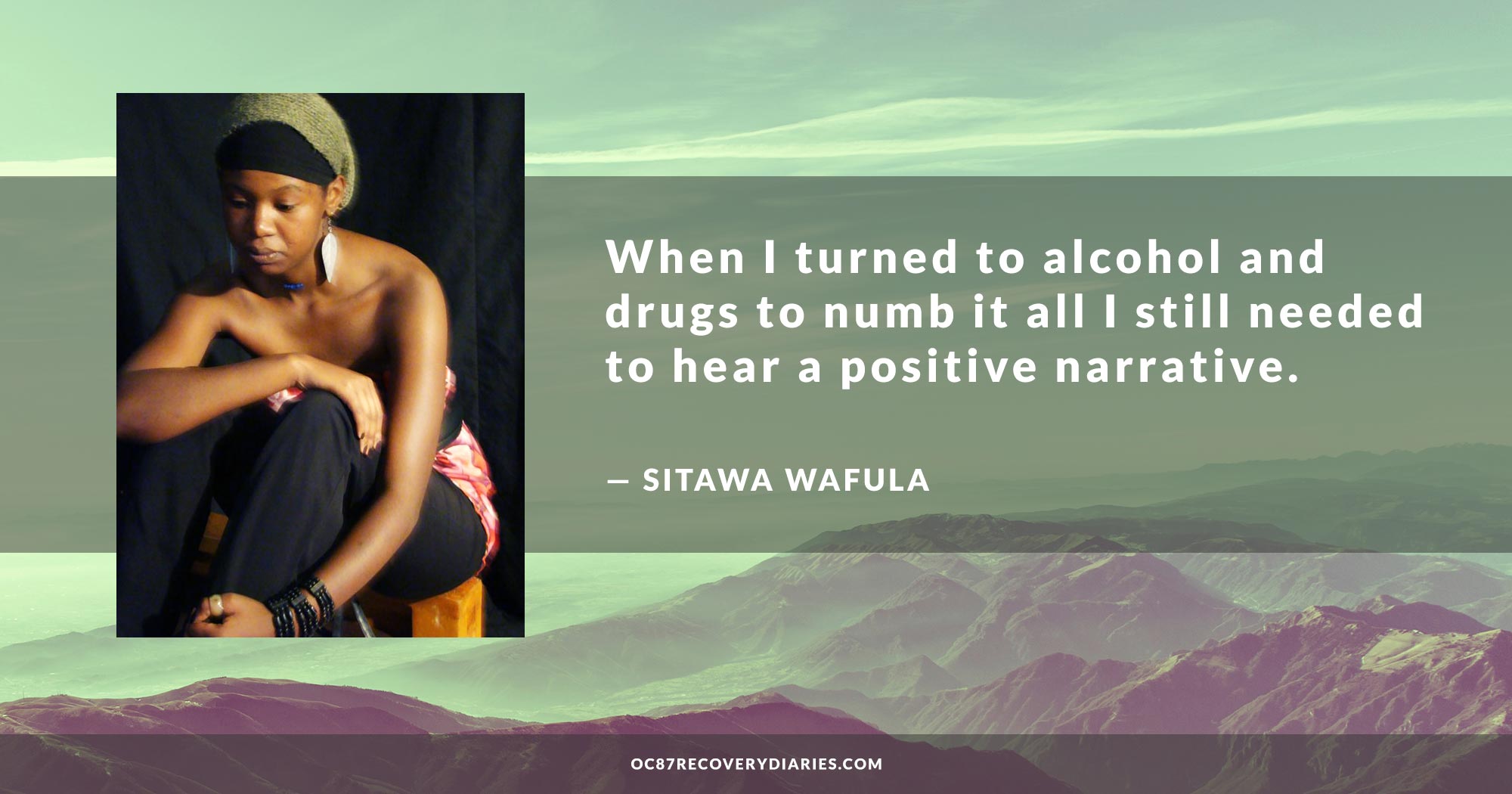 It’s a desperate situation, but what can we do about it?

What I needed when I was raped was somewhere safe to go and people to talk to who had had similar experiences. To hear a positive narrative from someone, anyone even if they were still struggling, I wanted to know that I was not alone, that someone else knew how I felt but I didn’t get any of that.

I faced stigma and blame both from myself and others. When I turned to alcohol and drugs to numb it all I still needed to hear a positive narrative; when I was locked in a psych ward or couldn’t afford to pay for doctors’ visits I needed a narrative but couldn’t find any.

Eventually I discovered I had to do this both for myself and for others.

I started sending love and light to the world through my own narrative.

I told my story if only for me to relate to it myself.

I told it through poetry and on my blog and on social media and eventually to the newspapers and the TV stations.

I wasn’t ashamed because I knew there was an illness, two of them (epilepsy and bipolar)… then there was me, the beautiful African girl who had so much to offer the world and I didn’t want her to be swallowed up by the illnesses and her experience.

And the more I told my story, the more people told me their stories and I knew I wasn’t alone, and that gave me strength to keep fighting, strength to want to get better. The more stories were told the more I saw the social side of mental health and its role in both prevention and treatment. I saw how people needed the right narratives to motivate them, to take care of themselves mentally, to go see a psychologist or get a diagnosis.

So I began My Mind, My Funk, a mental health info and support hub that provides people in Africa with helpful information to not only manage mental health conditions but also deal with everyday life.

Through my work, I have seen a lot of people have a turn-around by hearing my story and telling theirs. I won a Google Award and used the money to start a free SMS mental health support line that received 25,000 texts when it was operational and helped 11,000 Kenyans. These people would have otherwise become severely depressed or dependent on alcohol and drugs like I once was. Talking and listening to each other gives us the strength to help dispel prejudice and cultural stigma. 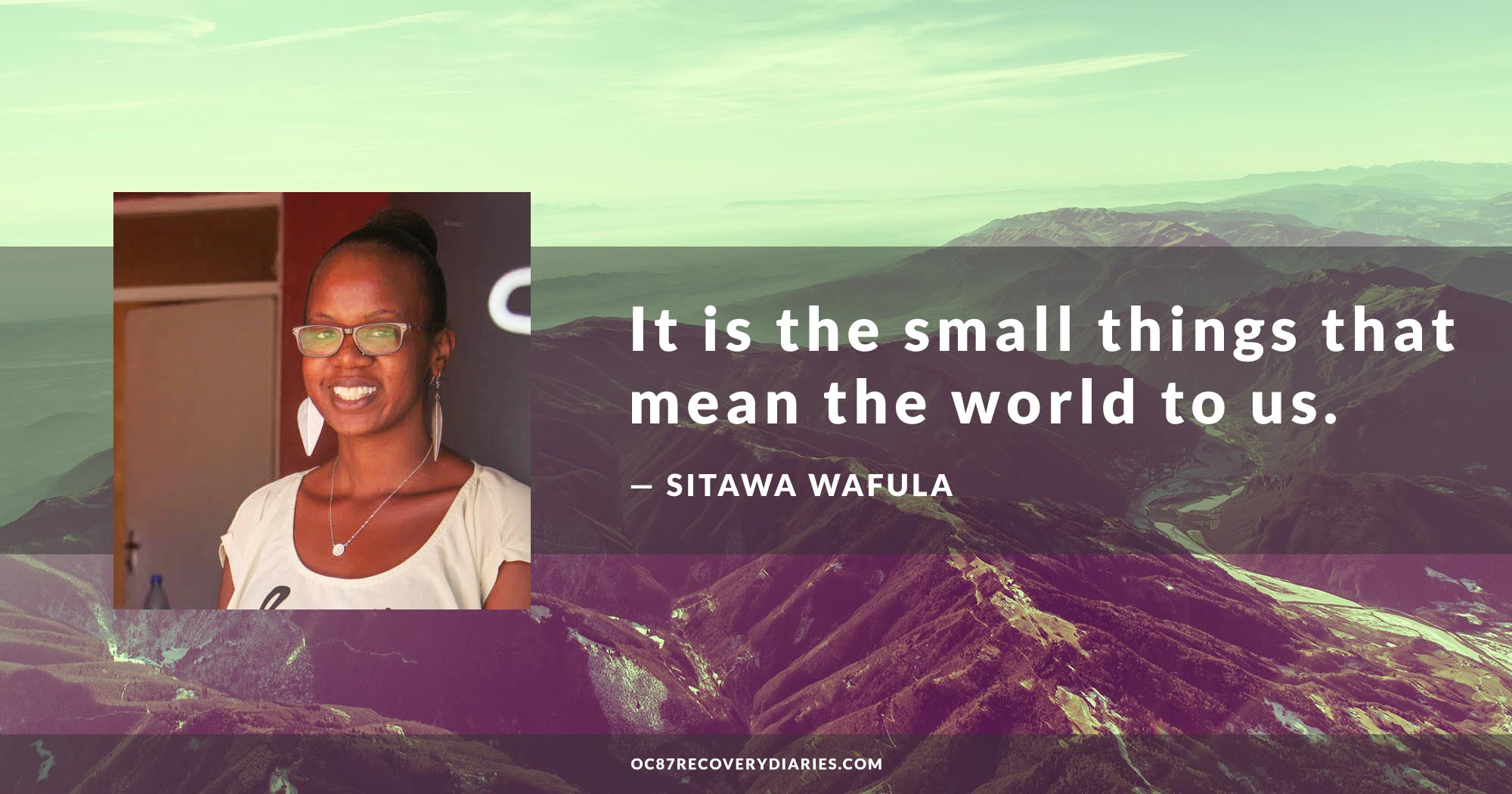 My main line of focus right now is the social, traditional, cultural, religious/spiritual and preventative aspects of mental health in Africa.I want to move beyond sending love and light to the world to teaching others to send that love and light to others because everyone with mental illness is a stakeholder in mental health. My Mind, My Funk currently provides people in Africa (and of African descent) with the necessary information and support to not only handle mental health conditions but also deal with everyday life. I look forward to the day there will be access to mental health information and appropriate support for everyone in the continent.

My efforts to bring conversations that are seen as tabooed in Africa on the table has seen me named as a Non-Communicable Disease Champion by the Ministry of Health – Kenya, recognised among the top 40 under 40 women in Kenya, 2015 as well as a New Voices Fellow 2016 by Aspen Institute and on the list of top 42 African Innovators to watch in 2016 by Ventures Africa.

Through sending love and light to the world, the world has responded by sending its own love and light to me. My work is now getting global recognition with a recent month long speaking tour in the US, being named among the top 42 African Innovators to Watch and getting on the prestigious Aspen Institute’s New Voices Fellowship.

Sending the world love and light through my email signature and tweets may seem like a small thing but for those of us with mental health conditions; it is the small things that mean the world to us. Like someone saying hello and really stopping to know how we really are or someone giving us a hug and sharing their energy with us. I look forward to being able to getting a driver’s licence since my diagnosis could allow or being able to get in a pool on my own without the fear that I might get an absent seizure and drown.

I am currently doing a 100 Days of Mental Health Challenge through which I document everyday things that are helping me take care of my mental health. It has been six month since I had my last seizure or episode of mania and depression. Keeping this public diary where I document and share on my social media pages, mainly Instagram and Facebook, is an attempt to show people that it is the small things that go a long way for us to taking care our own mental health and the health and well-being of those around us. 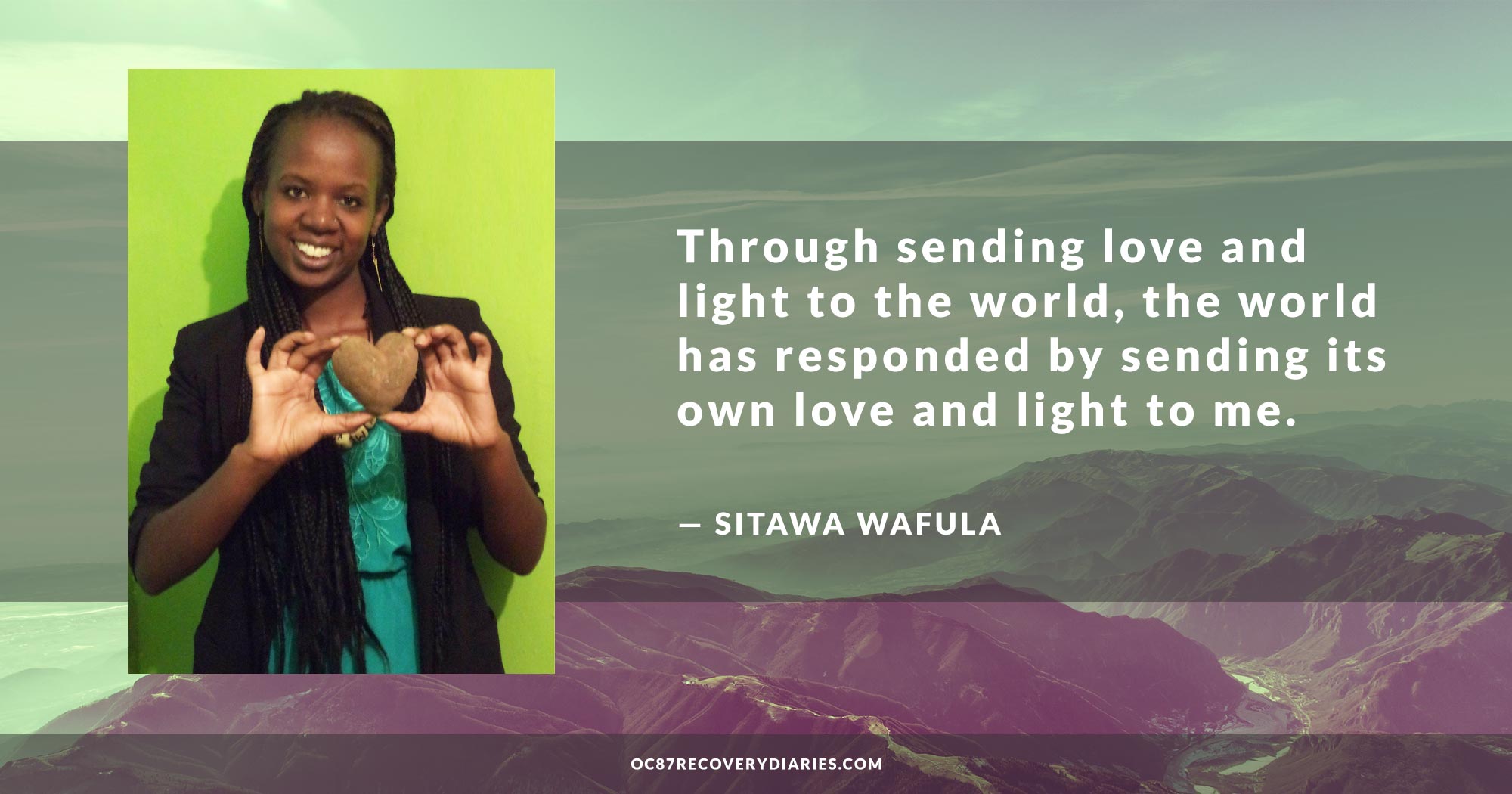 Sitawa Wafula is a Kenyan-based Mental Health Activist and Feminist who uses her personal journey as a rape survivor with a dual diagnosis of epilepsy and bipolar to provide people in Africa (and of African descent) with the necessary information and support to not only handle mental health conditions but also deal with everyday life. She won a Google Award in 2014, which helped her set up Kenya's first free mental health support line. Sitawa is a nationally-recognized speaker and she blogs at https://sitawa.blogspot.co.ke and tweets at @SitawaWafula.

A veteran of the United States Army, Russell lives with PTSD, something that affects his daily life. Watch these videos about veteran's mental health.