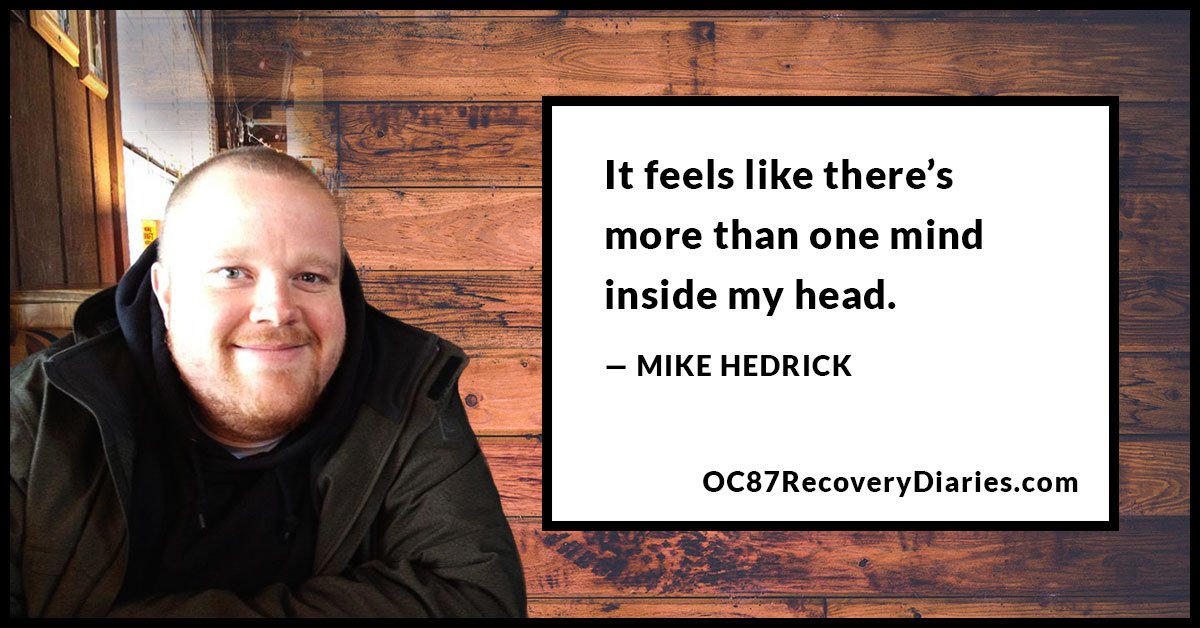 Throughout my ten years of living with schizophrenia, I’ve been privy to a number of strange occurrences as a result of my illness. These occurrences can range from delusional thinking that people are out to get me or that I’m much more important than I actually am. There are numerous other strange facets of the illness as well, but there’s one that has stuck around since the beginning: the voice of reason and rationality that sits in my head. I’ve tried to explain this any number of ways that never seem to do the phenomenon justice, but I’ve come to just think of it as the voice of God. I only call it that because it seems to have the answers I’m looking for when I pray for advice. It’s a seemingly always sensible voice that guides my thinking back to the reality of the situation in times of crisis and it’s been there with me since I had my first major episode.

There have been times when I’m wide awake lying in bed staring at the ceiling when I’ve conversed with this voice — and it’s strange that I regard it as something separate from me. It seems to know things I don’t and, while it’s perfectly logical that this is just some facet of my conscience, it’s as if it’s a voice and a separate entity in my head. I’ve talked with the voice at length about certain problems I’ve been having, and its advice is always reasonable and practical. The only time the voice has ever been speechless was when I asked it directly if it was God. It was quiet for a moment, and then it said, “Yes.” This cemented in my head that the voice was actually just some small part of my consciousness and not the actual voice of God, simply because the God I believe in doesn’t work that way. Also, because I have schizophrenia. I can remember one specific instance where I was having a crisis about the state of my writing career — things weren’t happening the way I would’ve liked — and I wanted so badly to get out of my current apartment that I was in a state of almost constant anxiety. I was lying in bed staring at the ceiling and I asked God for help. A clear voice emanated through my head. “Just give it time,” it said. 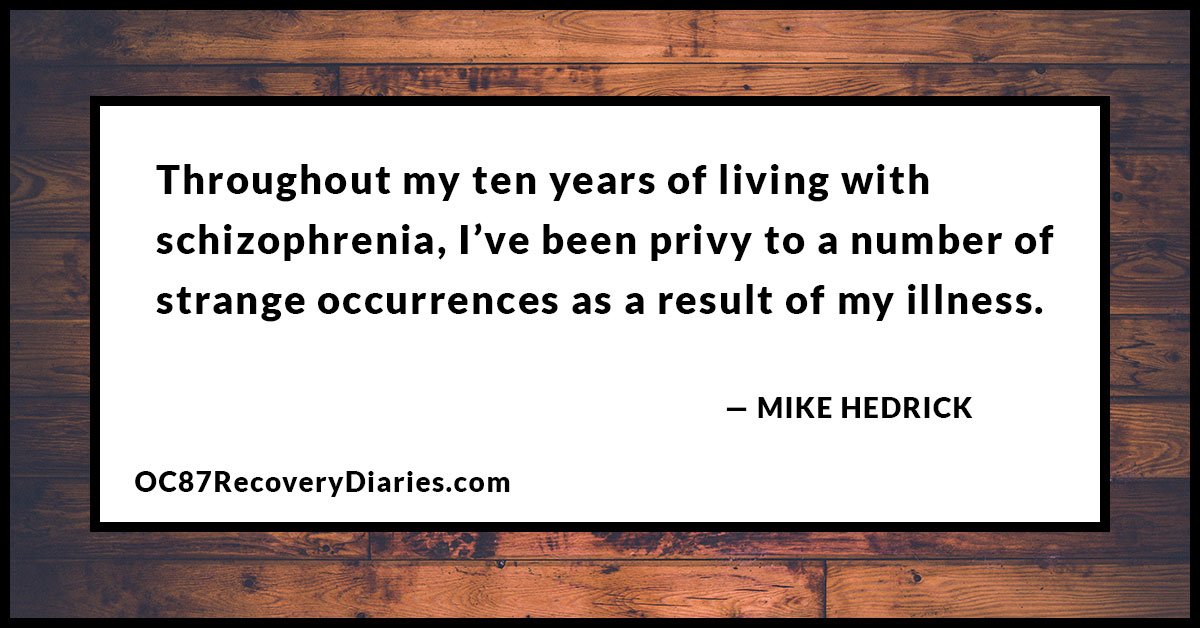 Another time I was worrying about what to do about an ex-girlfriend. I wanted to reach out because it was a particularly lonely point where I was on the edge of desperation and I asked God to guide me. “Let it go,” said the voice. And I did. I don’t know if I summon this voice or if it’s just always there with me but it’s as if, in a moment of crisis, I can just listen and it will have a compassionate word of guidance. There’s another voice too but I don’t like to speak openly about it very much because it’s the one that starts a whirlpool of paranoid self-defeating thoughts in my head, it’s the one that tells me that people are making fun of me, or that they’re out to get me, and it’s the one that tells me that everyone thinks I’m stupid or any number of negative traits. This voice whispers, it sneaks up on me and plants a notion in my head that makes me start to question boring reality and then it plays on that notion and plunges me into ever deeper holes where I can get lost for minutes or hours just pacing around my living room or staring wide-eyed up at the ceiling. It’s the one that tells me that I’m not good enough or that I’m a disgrace and that I should take the steps necessary to end things. I’m privy to both voices on an almost daily basis and I feel like I’m just a scared sad, little being whose mind is inhabited by strangers. I feel like I’m in the middle. 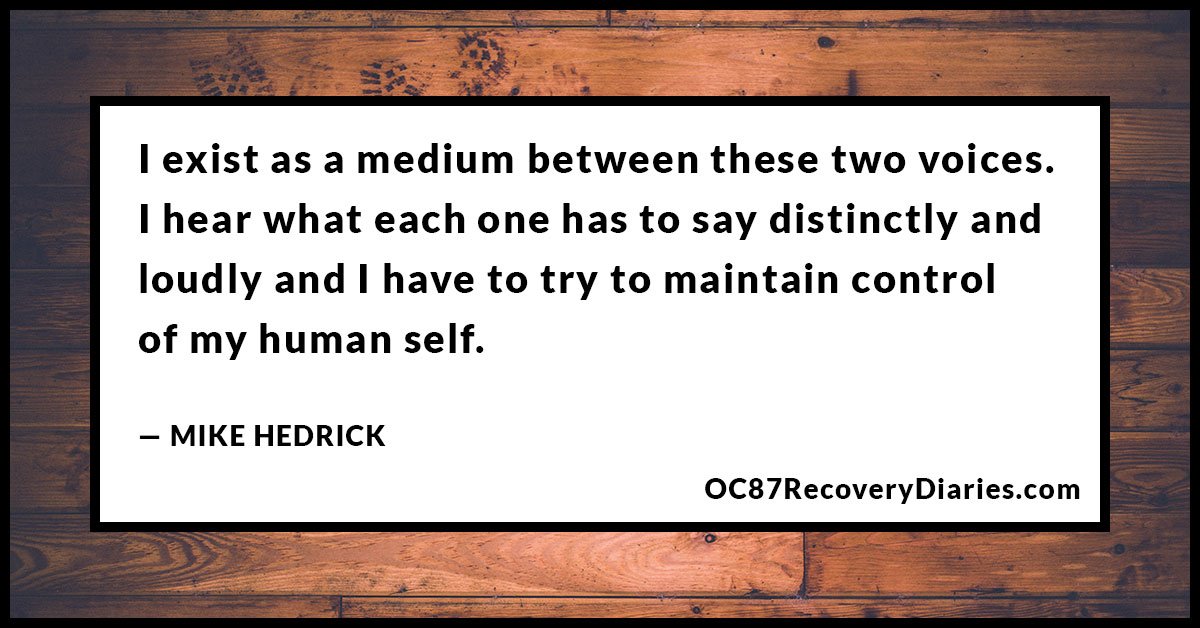 It feels like there’s more than one mind inside my head. It’s all too easy to get caught up in the things these voices are saying. Yes, one’s my friend and it gives me advice, but the other is so sinister, so nasty in the things that it says that, were any normal person to spend a day inside my head, they’d be utterly terrified. I’ve become used to it by now and I recognize that it’s there and, most of the time, I’m able to recognize when it’s whispering its treacherous words into my ears. Ray Lamontagne has a song where one of his lyrics is, “Well, I looked my demons in the eyes, Laid bare my chest, said “Do your best, destroy me. You see, I’ve been to hell and back so many times, I must admit you kind of bore me.” That lyric has always struck me as right on; it’s exactly how I feel. There are too many times still though, that I lose myself in the words that the evil voice is saying. In those times I have mini breakdowns where the only thing I can do is try to escape the situation as fast as possible. I’ll have to step outside, or I’ll have to go sit in my car and just breathe and just try to get a grasp on reality again. Sometimes it takes a while. The evil voice also seems to be more potent in exactly the wrong situations: parties or just hanging out with friends in some kind of social gatherings, all of the sudden it’ll hit me that the laughter from across the room was about how ridiculous I look or how nervous or effeminate my movements are. If there’s something I’m nervous about in a given situation, you can be damn sure that bastard voice is going to find some way to exploit that latent insecurity. This goes on everyday and my only respite is escaping, where I’m alone with my thoughts — where I can ask the voice of reason for help. I exist as a medium between these two voices. I hear what each one has to say distinctly and loudly and I have to try to maintain control of my human self. This may all sound convoluted to any “normal” person, but this is just one aspect of living with schizophrenia. I’m both terrified of it and used to it at the same time. Although the evil voice never really has anything new to say, it still catches me off guard when it starts to hiss its insidious little nothings in my ear. I don’t know if these two beings in my head qualify as “schizophrenic voices” as I don’t actually hear them audibly. I do know they’re coming from inside my head. It seems like so many other people in my situation don’t realize that those voices are emanating from inside them and so that functions as a type of hallucination, but studies have been done where it’s been shown that the sufferer’s own vocal chords are modulating when they hear these voices. Maybe I’m better off, I don’t know. Maybe I was blessed with a cognition that tells me that these things aren’t real, but I know that I experience them and it’s hard to get a grip on reality when you’re in the midst of a cacophony of influential voices. 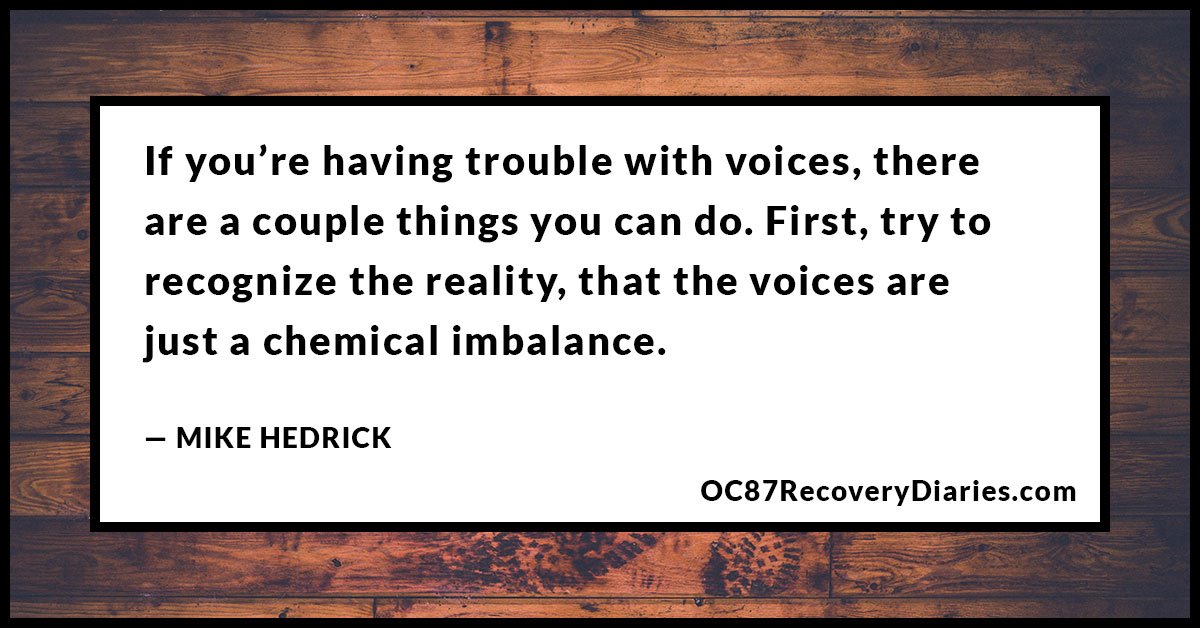 The truth is, for the last ten years, it’s been hard for me to distinguish reality from the things that my mind is telling me. I don’t know which way is up sometimes and that’s part of the illness. It can grab you forcefully one moment then make you bawl the next. It can tell you things that you have no control over and turn your best days into distorted nightmares. Even when I was a little kid I’d make connections to things that didn’t seem to be relevant. Always asking why I would come to conclusions about things that didn’t seem to be so firmly rooted in reality. The experience is like an automatic impulse that everything you fear is happening, you easily disregard evidence and human nature and you have little to no control over the things your brain is telling you. Hopefully, there’s a kernel of common sense left and you have to cultivate that kernel to be able to distinguish between fact and delusion. I’ve been there. I know what it’s like. If you’re having trouble with voices, there are a couple things you can do. First, try to recognize the reality, that the voices are just a chemical imbalance. You can catch yourself before you start falling into a hole, and that’s something I’m still learning to do. Then you can look for evidence that what the voices are telling you isn’t the truth. This is easier after having recognized what the truth is over a long course of living with the illness, but if you need help, don’t be afraid to ask someone you love. Usually they can be pretty sure of what’s real and what’s not. The point is: voices are common, more common than you may think. If you’re experiencing them and you don’t know what to do, you can always ask for help. The people who love you will likely be more than willing to assist you. You’re also never alone in dealing with this stuff, there are numerous resources, online and in person, that can help if you don’t have anybody to turn to. I know what voices are like and I know how scary they can be. Only with years of living with the illness have I been able to separate the things they are saying from reality so I’m saying it takes time, and a lot of it to get better. You can do it though: if I can do it, you can. Your loved ones may be in over their heads but there’s help out there. 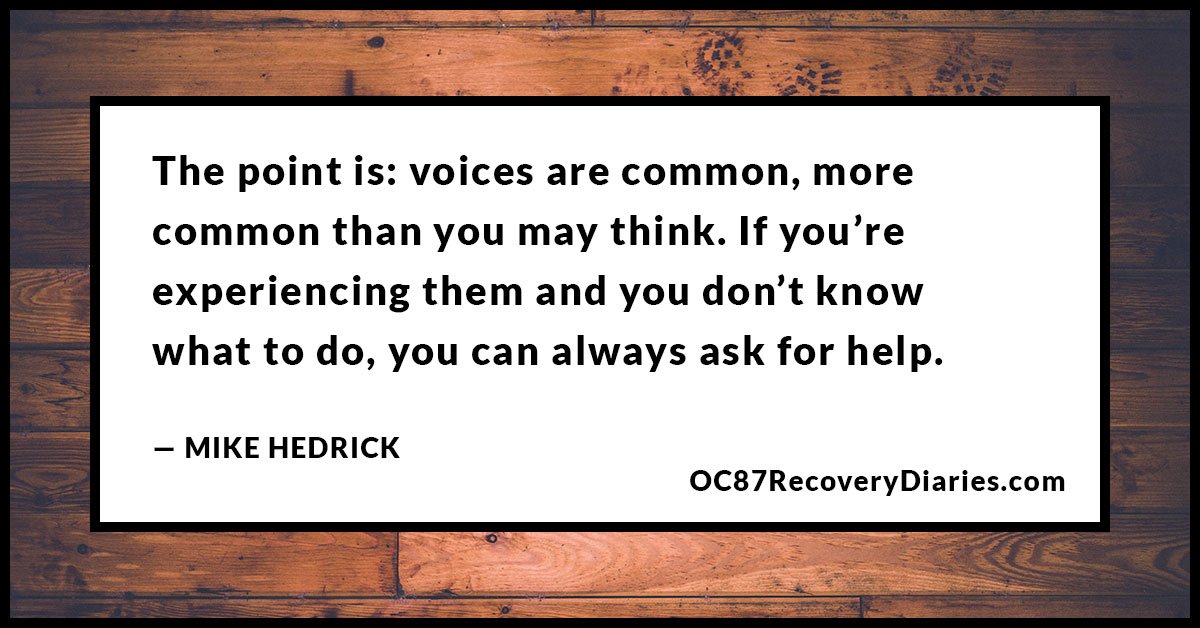