My Experience Inside a Psychiatric Hospital - OC87 Recovery Diaries

My Experience Inside a Psychiatric Hospital 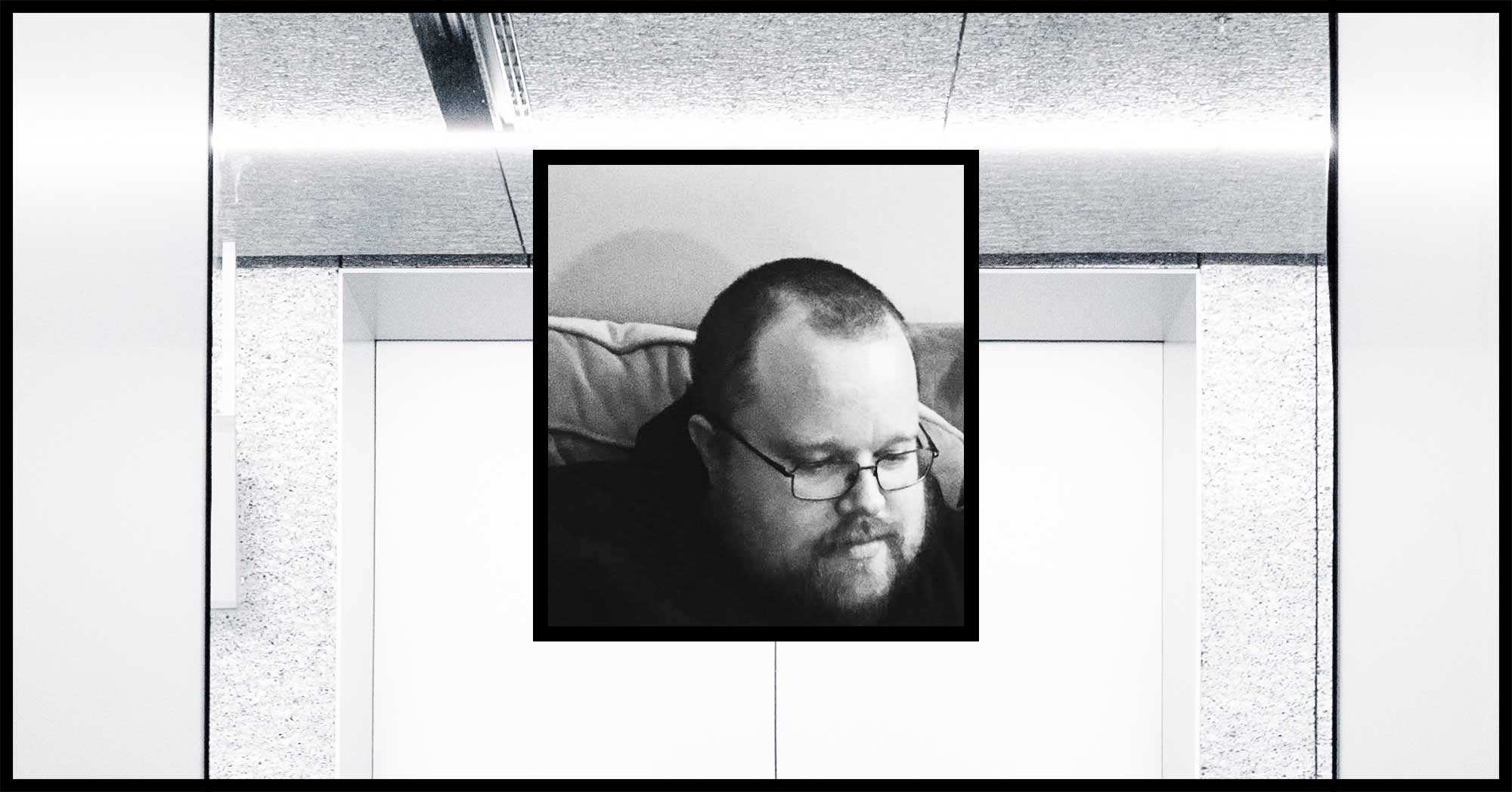 Say the words “psych hospital” to the average person and the hair on the back of their neck might stand straight up. There’s a pretty strong stigma against psychiatric hospitals, thanks to movies and the media, and haunted house Halloween attractions that use abandoned hospitals as settings for terror and fright. These facilities are often tucked back, out of sight—chances are you won’t pass one on your way to work, or notice if you did. It doesn’t help that the only people who really know what goes on in these places are the patients and healthcare professionals inside, and the inspectors who drop in from time to time. While psych hospitals were certainly brutal in the past, nowadays they are, overall, more innocuous and unremarkable than terrifying and horrific. 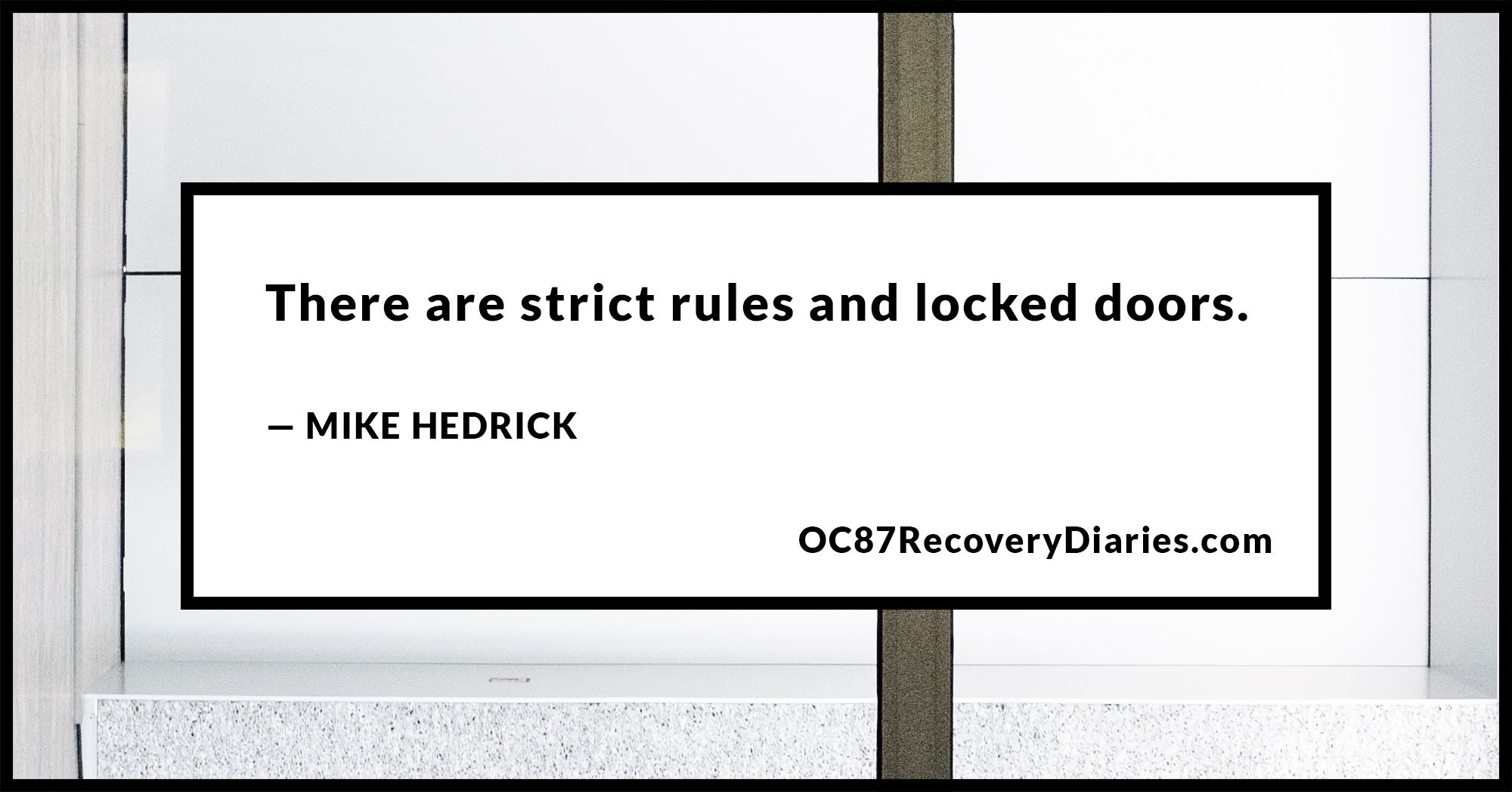 are strict rules and locked doors. Because of that, and because of the dark places you’re going in your mind, the psychiatric hospital can seem like a very bleak place. Generally, the consensus seems to be that psych hospitals aren’t the most pleasant places to be. This is true for several reasons, but it’s also false. As someone who has been there; the truth, as I’ve seen it, is far more complex than any depiction that you may hear about, read, or see.

The thing about psych hospitals is that they are designed to be places of isolation from the larger world, not because people with mental illnesses are dangerous and should be separated from society, but because, for recovery to begin, people in crisis need a place apart from the stressors of life and society. As such, psych hospitals, which are “over there”, can only be illusively speculated about by neurotypical society. If people can’t experience something, they tend to make up stories about what those experiences must be like. Sadly, many of those stories take a turn into the realm of fantasy and horror. 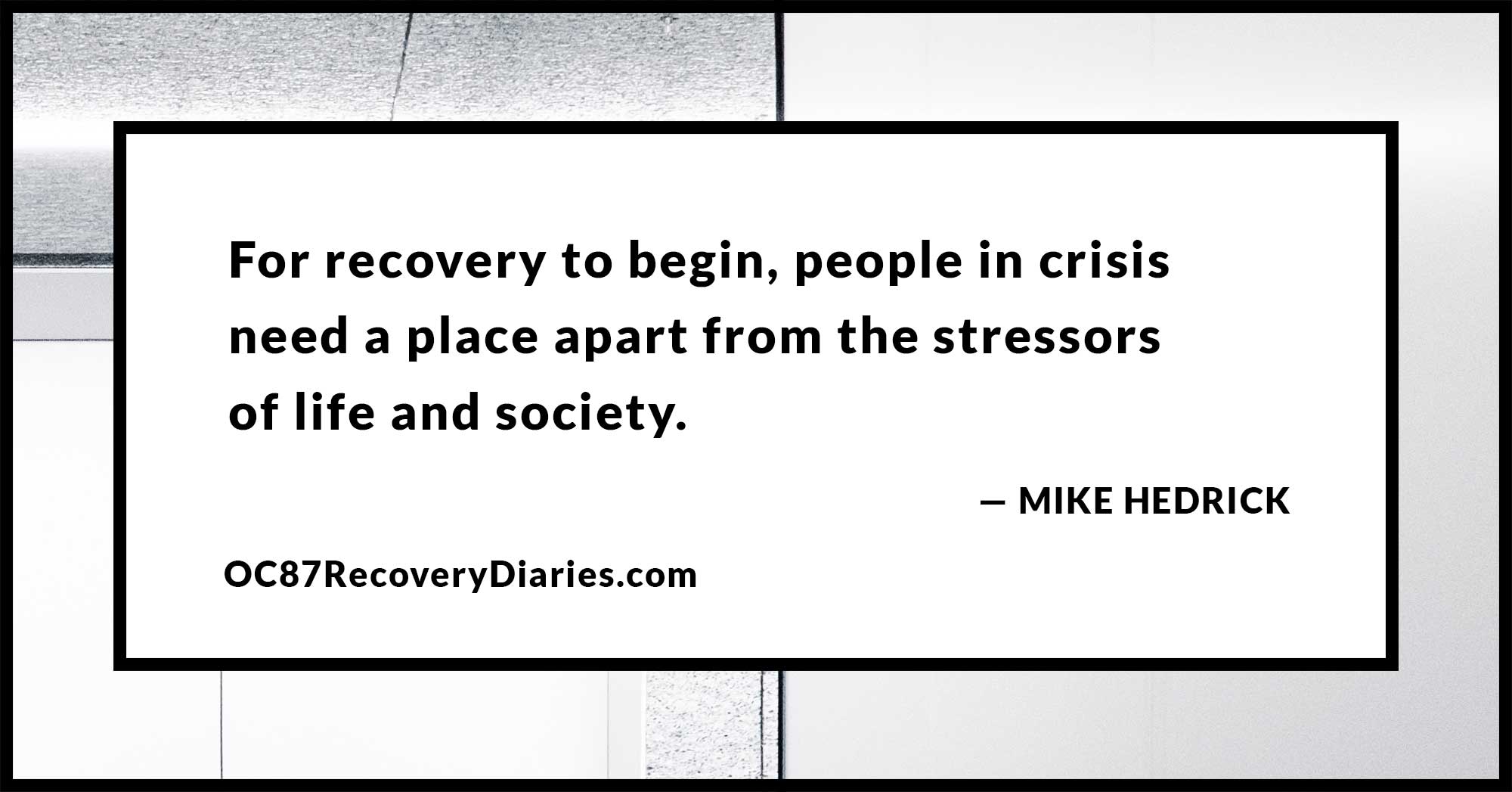 The truth is that psych hospitals these days, I don’t know about hospitals in the past, are places of recovery. That said, the people who need these facilities, myself included, obviously have poor opinions of psych hospitals– not because they’re bad places, but because we’re in a terrible state ourselves, so it’s hard to face the uncomfortable truth: we have reached the point where we need to be locked up for a bit.
My time in the psych hospital was very, very hard. I had just come back from a trip to the U.N. and, no, I hadn’t been invited. I thought I was a prophet. I was adamant about my mission and the messages that I thought I was receiving. I willingly signed permission to be placed on a seventy-two hour hold in a psych facility. This meant that, while I didn’t want to go, I voluntarily decided to go on the advice of my doctors for three days to be observed and to determine treatment. I thought they’d surely see that I wasn’t crazy and this stuff was actually happening, but what started as seventy-two hours slowly progressed into a week and a half of feeling like a prisoner. I experienced significant guilt and denial, and there were long arguments and tears with my parents who I believed, even though I signed myself in, had “thrown me in a mental hospital.” I was under the self-imposed impression that I shouldn’t tell anyone what was happening in my mind because then my mission would be over, the government would win, and I would just be crazy: locked inside a psych hospital. 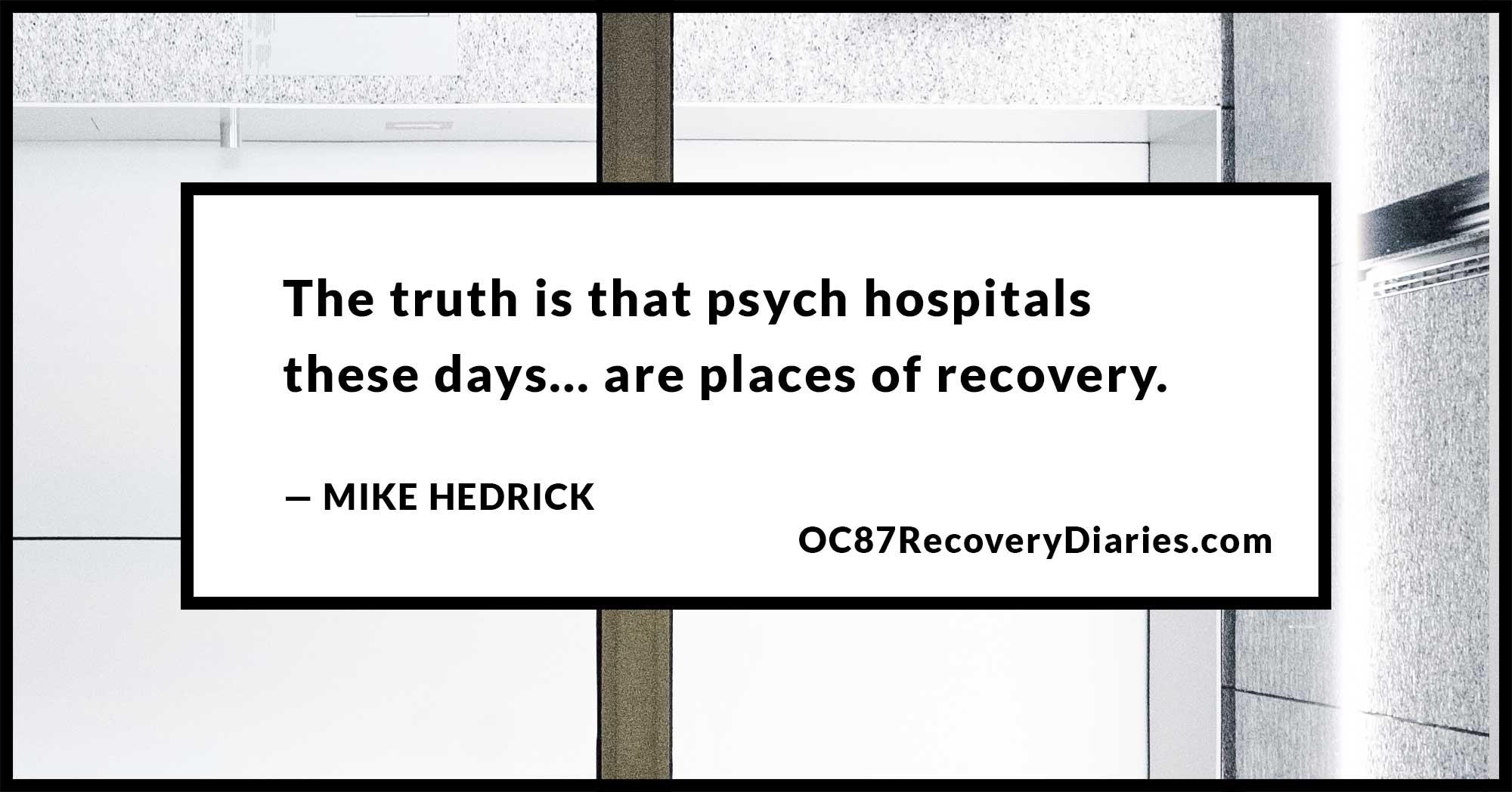 But what is it actually like, inside? Having gained some distance from my hospitalization, I can look at it more objectively now, so I’ll try to describe it that way for you. I don’t know about all psych hospitals, but the one I was in was a calm wing of the community hospital with separate rooms, simple beds and plastic mattresses. The ambience is quiet, save for brief outbreaks of activity and talking amongst the patients. There is a large, windowed nurse’s station in the middle of the wing with a view of the entire area. There’s a kitchenette, a large table, and a common room where there’s a TV and comfortable seating. There are also rooms for meetings with doctors and families, but they are usually locked until it’s time for your meeting. There’s a phone booth and, down the hall, there’s an art room. The days are structured with activities taking place at the same times each day. You can choose not to go to these activities, but then you have to just stay in your room, and the common room is only open during specific hours.

Essentially, a psych hospital is like a nursing home. The only difference is that the doors are locked and there are bars on the windows. I think the thing that makes psych hospitals sound so scary is their history of being horrible places that systematically mistreated and abused people with mental illness, but those days are gone. Today’s psych hospitals are for establishing safety, resuming or adjusting medications, and for getting better; for getting a handle on your life. 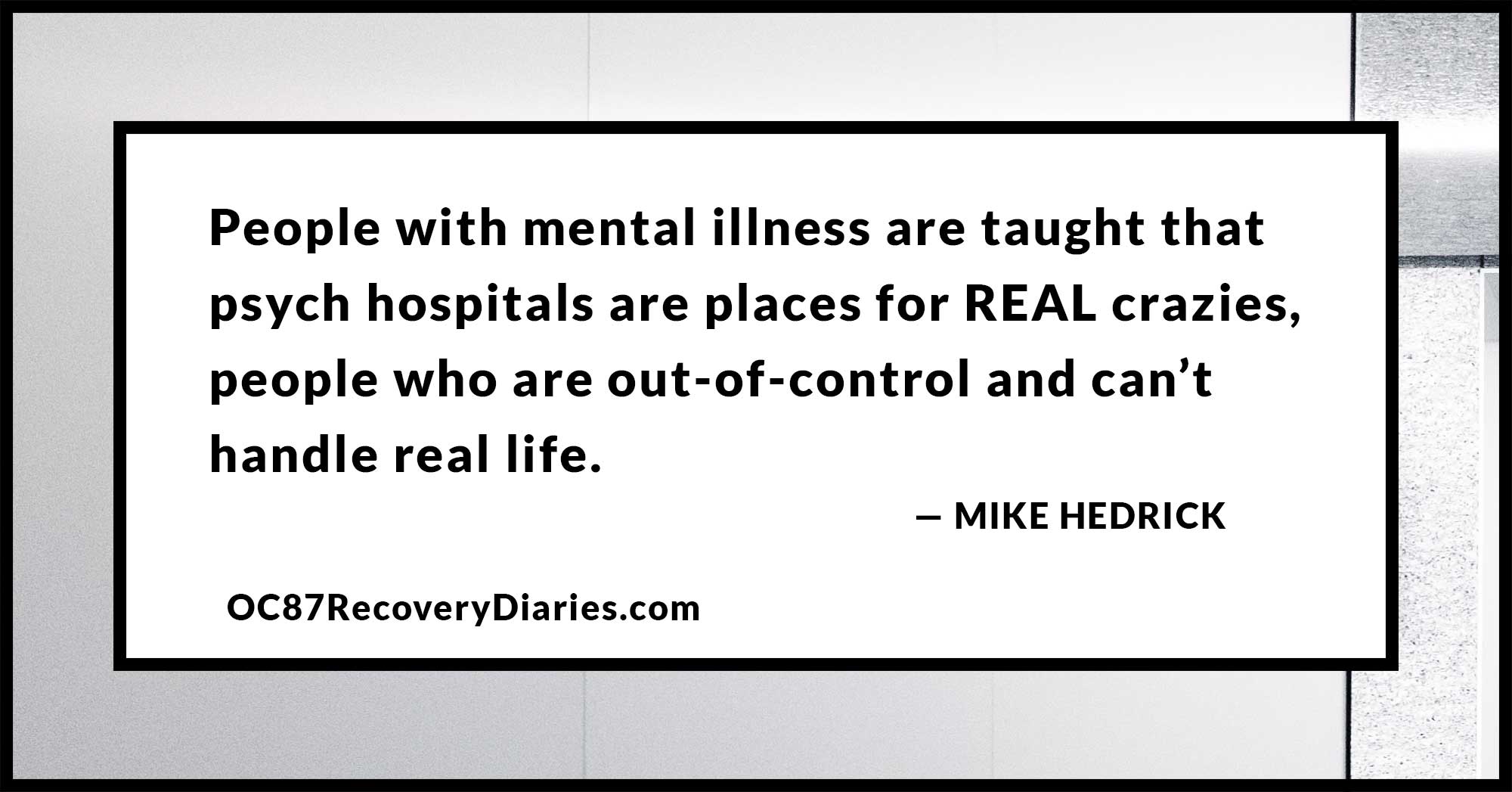 I never experienced any type of violence or negligence during my stay, which was mostly benign. There was the occasional insult thrown around, but nothing ever escalated to a point where I had any fear of my surroundings. I realize this may not be the case for others but, for me, the psychiatric hospital was mostly a place of sadness.

I don’t want to seem like I’m sugarcoating anything; we are broken when we have to go into the hospital. We are imagining terrifying things, and we are anticipating the worst because of all the negative stereotypes and myths we have heard and bought into about psychiatric hospitals. People with mental illness are taught that psych hospitals are places for REAL crazies, people who are out-of-control and can’t handle real life. All those unhealthy, unhelpful ideas are in our heads and can result in treatment delay because of the desire to hide symptoms for fear of hospitalization. This helps nobody.

Some people hold the belief a psych hospital is the place where society throws its trash. We are not trash; and we are not even “we”, we are you. The truth is that, at any time, anybody out there, given the right set of circumstances, could need a psych hospital. You probably won’t like it at the time, but, eventually, you’ll be glad it was there for you. I’m glad it was there for me. 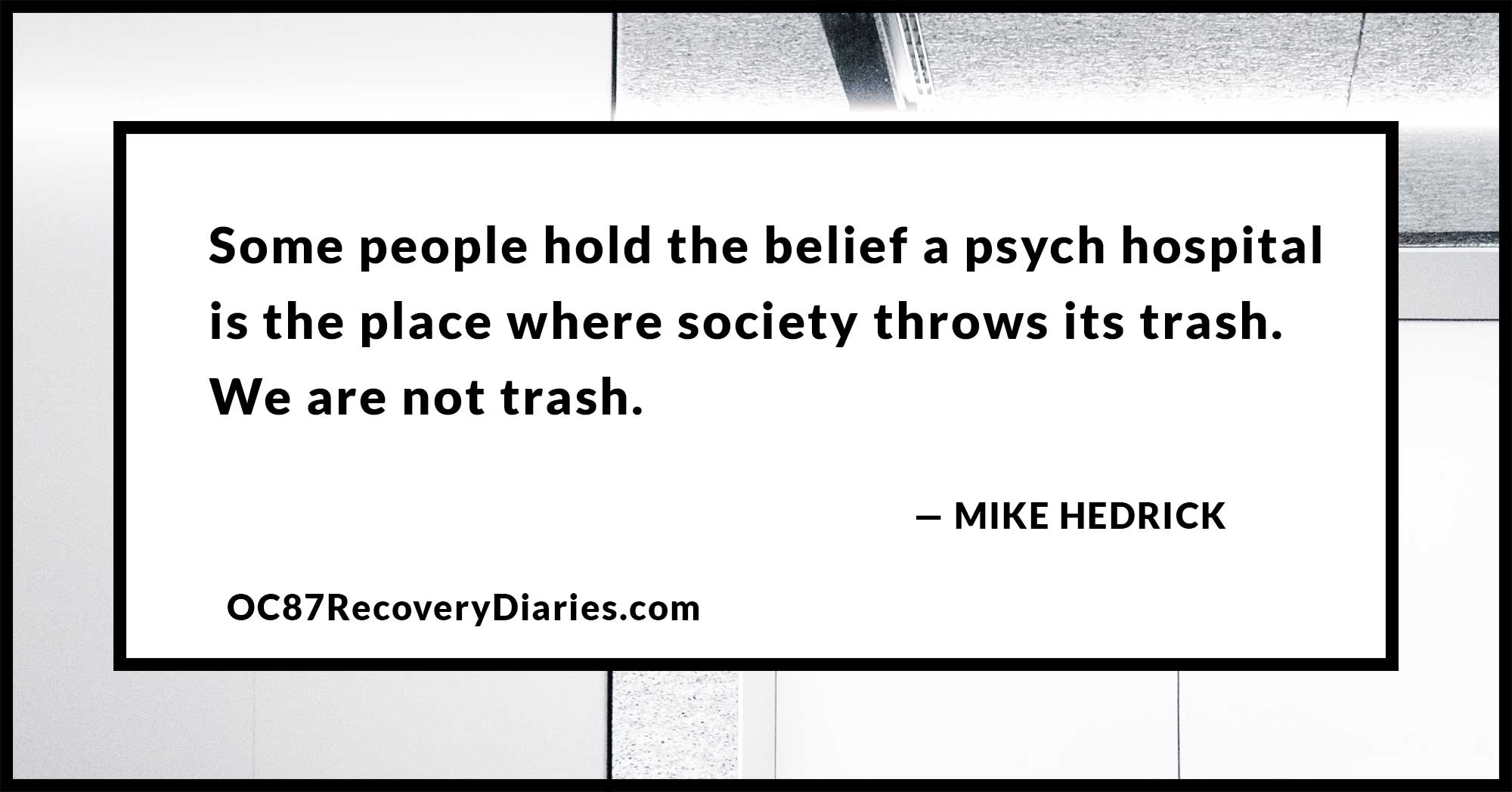 Disclosing your mental illness has costs and benefits, but the thing to remember is that, while it’s a tricky choice, it is most definitely a choice.