VIDEO - One Step Away: A Film on PTSD, Homelessness & Redemption

One Step Away: A Film about PTSD, Homelessness, and Redemption

Wednesday. 6:30 a.m. Center City, Philadelphia. The city suddenly jolts into action from a night of slumber. There’s a lot of motion and a ton of noise. Buses, subway cars and garbage trucks create an urban soundtrack for early morning players — joggers, dog walkers, and commuters — who criss-cross city streets as they start their busy, frenzied days.

It feels like business as usual, until a clear voice rings out from a downtown street corner.

Meet Tammy Mitchell. She’s carrying a stuffed camel named “Wednesday,” and she’s selling One Step Away, a newspaper created by people without homes for people with homes. Although she has some social anxiety, you’d never know it. Tammy greets everybody who crosses her path.

Men and women smile, albeit reluctantly. Some stop to purchase a paper, though most keep moving on this chilly morning, their step a little lighter from the words of encouragement from an unlikely cheerleader.

Two days ‘til Friday, everybody!

One Step Away is Tammy’s livelihood. She purchased each paper for a quarter, and sells them for a dollar. She works to keep a roof over her head. She’s also using her natural gifts– as a writer and a person with a sense of humor — to make a difference in the world and a life for herself.

Tammy’s cheerful attitude this early on a crisp morning is uncommon, but it’s even more remarkable when you find out that she lives with a physical disability — painful rheumatoid arthritis, a disorder that occurs when your immune system mistakenly attacks your own body’s tissues. Less easily detected, but more crippling, is the PTSD she wrestles with on a daily basis.

Everybody thinks that if you have PTSD, you’re a soldier and you were at war. They don’t realize that child abuse can cause PTSD too. It can leave you with life-long scars. I’m fifty-three years old. I stopped having nightmares about my childhood 10 years ago.

Tammy’s PTSD stems from trauma she experienced as a child from an abusive mother and her mother’s third husband — a “sociopath,” Tammy says, who “liked hurting people, especially a small child.”

The physical damage goes away quickly enough. The emotional damage is another story. When you’re twelve years old and you don’t even have the right to be safe in your own bedroom, when you have to fist fight a grown man in what is supposed to be your home, the people you’re supposed to be able to trust, it damages you for the whole rest of your life. You never get over it.

PTSD is not any fun. It’s hell. It’s hell to not be able to sleep at night because I keep hearing footsteps in my room even though I know there’s nobody there. You know? It still makes me jump and I can’t help it. Even though I understand what’s going on, it doesn’t make it stop. 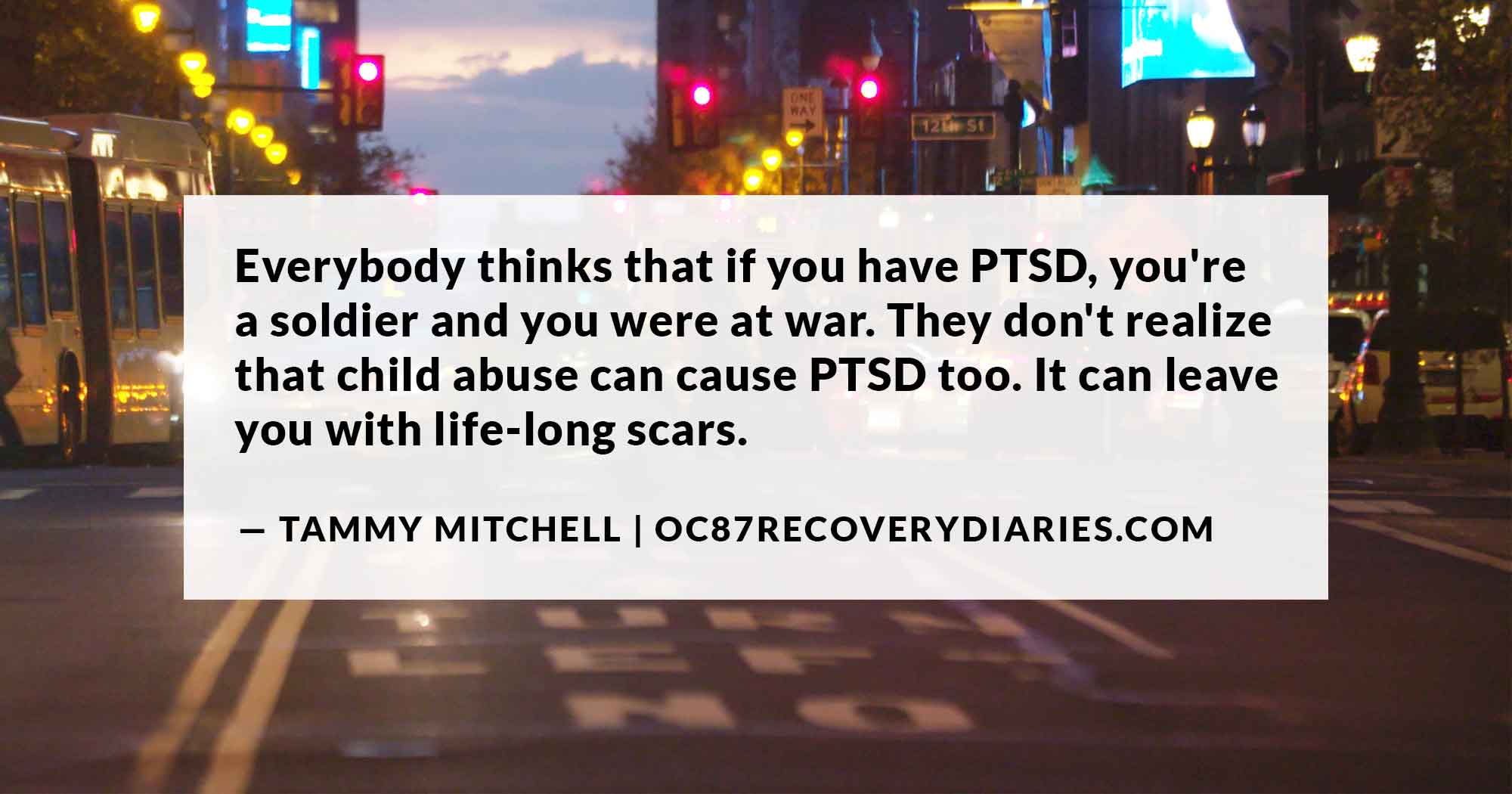 Because of Tammy’s challenges, there are days when she is sick and unable to work. Not only does she have to wrestle with her demons, but she also has to confront stigma about her experience.

A lot of times when you have a mental illness, it’s like you might as well have horns growing out of your head. It’s like the illness itself isn’t hard enough. You know? Living with rheumatoid arthritis and PTSD isn’t enough. I have to put up with the attitudes that other people have about such things. So, sometimes it’s just easier to just stay in. It gets really stressful.

Tammy appreciates the flexibility of her job. And she makes the most of it. Tammy’s sense of humor and her interactions with her “regulars” are an uplifting force in her life.

You have your good days. Wednesday morning is one of my better days because I get to check with my regulars, and having them walk by me on Wednesday morning is what’s right with the world. Does that make sense? They make the world a better place when they laugh and giggle at my childish humor.

One Step Away has been a steppingstone to help her rebuild her life after she found herself without a home, living on the street, sleeping on the ground behind the high school from which she graduated many years ago. 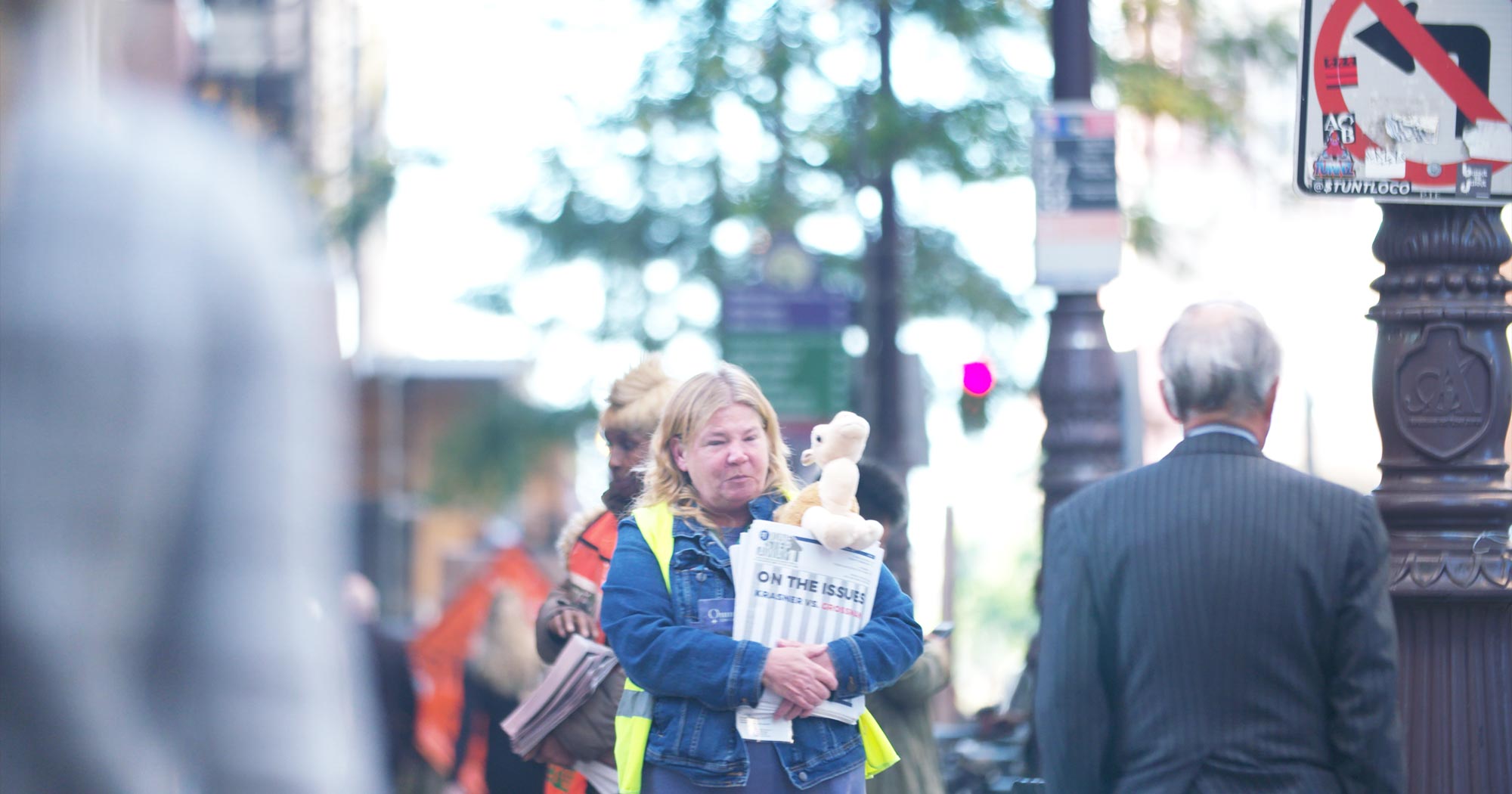 Through connections made with patrons of One Step Away, and with the aid of the money she earns selling the paper, Tammy now has her own apartment. In addition to selling the paper, Tammy also writes for One Step Away, and uses the paper as a forum to discuss those ideas and issues that concern her, illuminating readers about her own journey. Her work and her home play a large role in her recovery.

One Step Away gives me a chance to not feel powerless. When I wrote that article on child abuse, I felt like one person can make a big difference. A lot of my customers were coming up to me and saying, “I never knew the statistics were that bad.” Do you know that a classroom full of children die every seven days in this country from child abuse? It’s so prevalent that sometimes it seems like child sacrifice. And this is not the kind of country that’s supposed to give into that. And yet it does.

After spending a few hours with Tammy, it’s clear that her job is not easy, she’s standing outside in all kinds of temperatures and faces a good deal of rejection. Still, the work gives her strength and purpose. And a resolve to make a difference in the world, in spite of (or perhaps aided by) the PTSD.

There’s this book called Strong at the Broken Places, which I read. I understand what that means now. But for years, I didn’t. I just kept thinking, I’m not strong, I’m weak.

The PTSD, it feels like it makes you weak and it doesn’t. If anybody out there with PTSD is watching, I want them to understand, you really are stronger than the average person. You have PTSD because you are strong enough to react to what you’ve been through, whereas most people just, they put up delusions. Whereas people with PTSD, we have a tendency to face reality. As hard as it is. We face reality. We don’t get the — I’m going to say — the luxury of delusion. 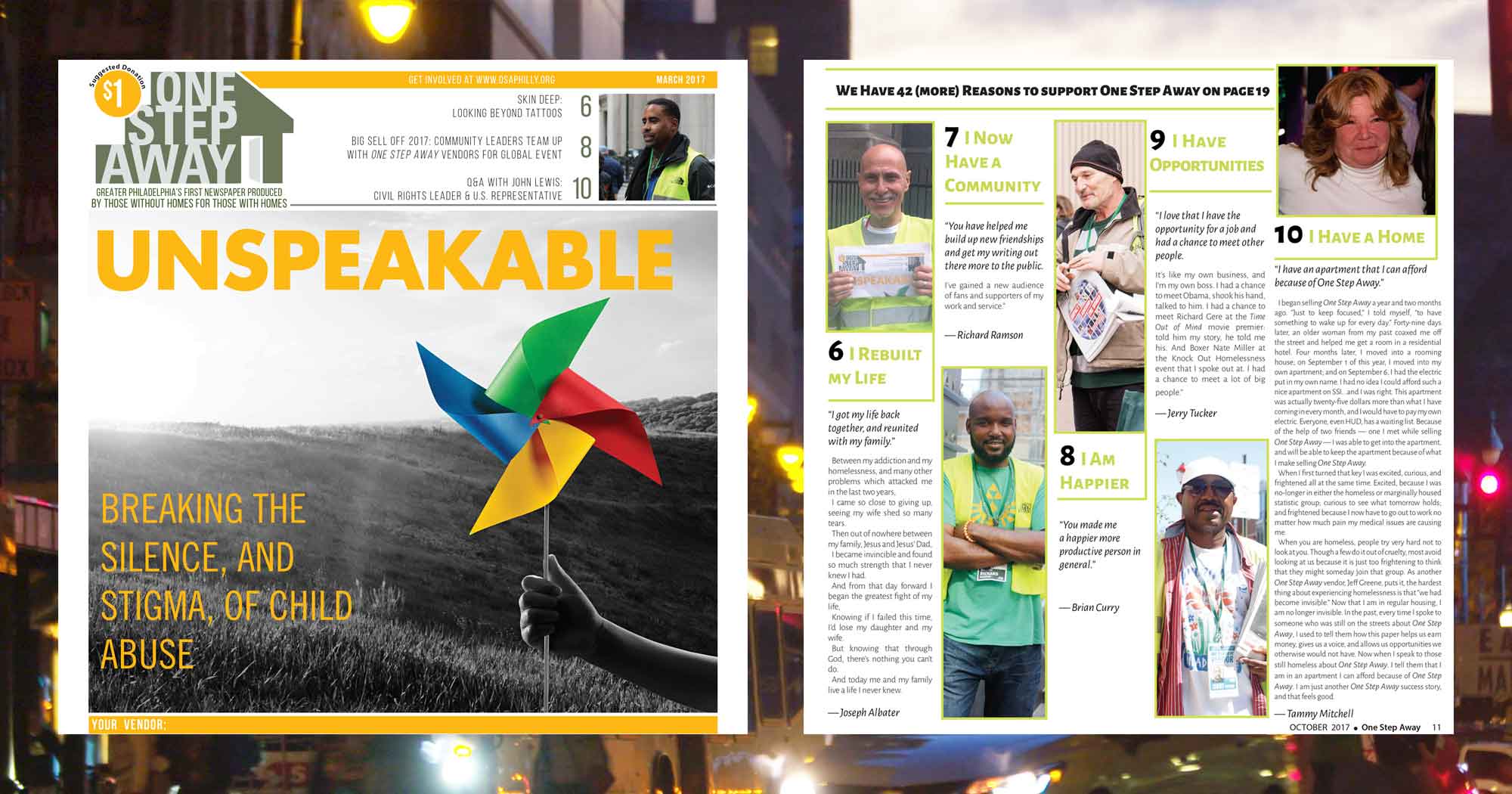 Tammy is learning to feel safe in her own apartment, and is strengthened by the network of support that has emerged since becoming part of the One Step Away community. When asked to describe her personality, Tammy said:

I would have to say I’m someone who likes to showcase my strength. I’m stronger than I thought I was. I like joking with people. I love to laugh. I’m determined because there’s so many days when I’ve been in so much pain that I really didn’t even want to wake up the next morning, but not only did I wake up, I woke up, grabbed my papers, and came out and worked.

ONE STEP AWAY articles by Tammy Mitchell 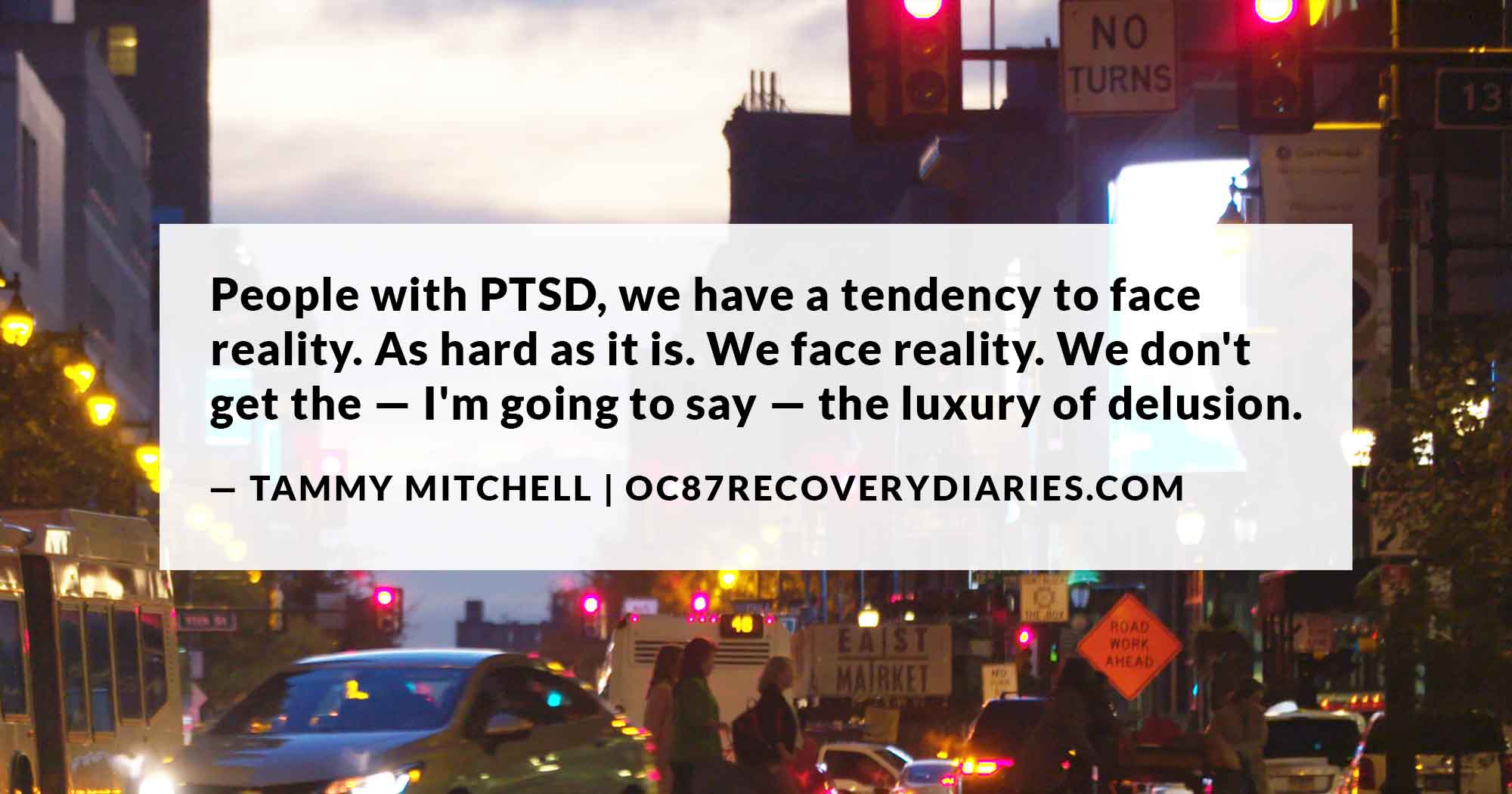 ABOUT ONE STEP AWAY

Tammy is one of about 60 people who sell One Step Away, Philadelphia’s first newspaper produced by those without homes for those with homes.

The monthly tabloid includes news about homelessness and affordable housing as well as creative writing, photographs, illustrations and other content produced by those experiencing homelessness or joblessness.

Street vendors buy the newspaper for twenty-five cents, then distribute it on the street for a dollar donation, keeping the difference.

The One Step Away editorial board is comprised of men and women who are homeless or formerly homeless, as well as homelessness advocates and providers.

Resources for Human Development, a national human services nonprofit with corporate headquarters in Philadelphia, publishes One Step Away each month.

One Step Away is one of many street newspapers (or street papers) published in over 30 countries, most located in the United States and Western Europe.

"I was hoping that Herbie The Love Bug would bring us some joy." — Gabriel Nathan, Editor in Chief of OC87 Recovery Diaries