This is part one of a two-part series. Here’s a link to part two where, through the magic of technology, Mike Veny interviews his own depression!

Mike Veny is an advocate who speaks boldly and truthfully about his journey and his mental health struggles. Mike Veny is an entrepreneur who makes a living inspiring others. Mike Veny is a drummer who breathes deep inside his spirit when he lives through his music. 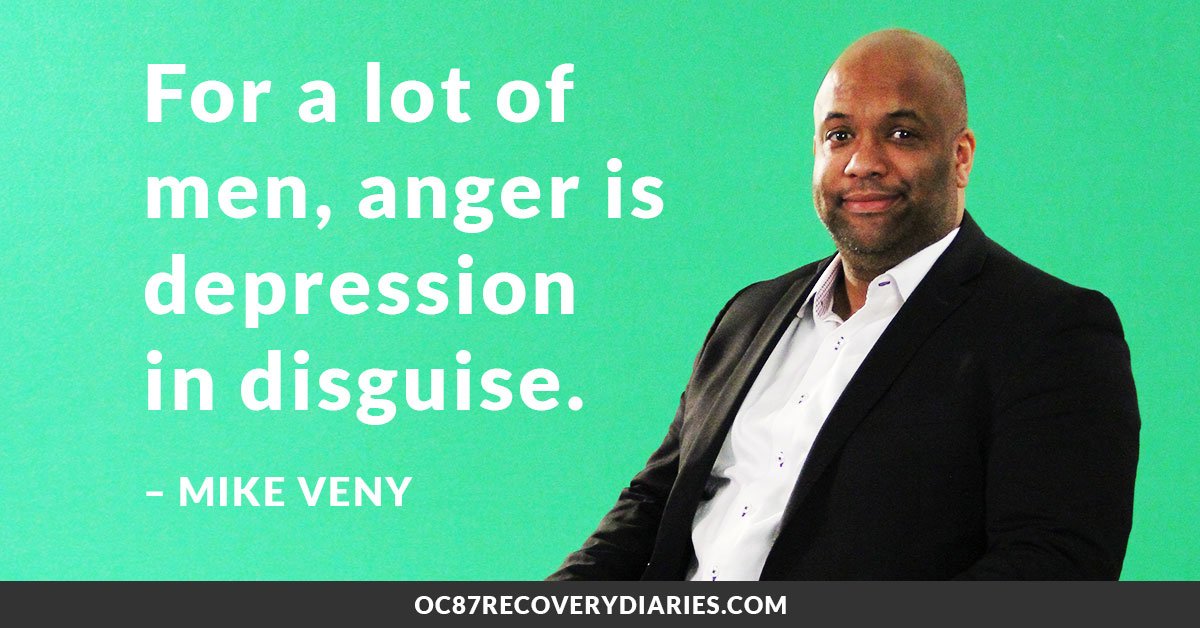 In this video, Mike Veny shares his story, details his mission, and explores his definition of “A Real Man.”

The struggle to keep moving forward in his life’s work is a challenge. Sometimes, Mike says, he feels that he is a fraud, trying to stay cool while a not-so-silent fight goes on in his head. He has to put on a “polite businessman” persona when all the while another, more critical and abusive voice in his head teases and taunts him. This video playfully explores Mike’s very real lived experience.

Transcript of the video “A Real Man” with Mike Veny

When I was younger, I had a lot of rage, and I would explode with anger. And for a lot of men, anger is depression in disguise. And I’d get angry every day, at lots of things, and I think the weights help me have a place to let out that anger in a healthy way.

It doesn’t eliminate the depression, but it makes it better.

My mental health issues started when I was younger, and they manifested, I guess, as behavior problems.

Basically, I was expelled from three schools because of my angry, raging outbursts. And for me it was about power. When I felt threatened, I would feel the need to throw a desk at a teacher and try to kill her, because that would make me feel powerful.

I really still struggle with that to this day — I don’t throw desks or try to hit people anymore, but I struggle with a lot of power issues.

In 2011, I had a breakdown in New York City. I was becoming suicidal, I was angry, I was having relationship problems, it was bad. And I remember saying to myself “I don’t want to die.” And I knew if I didn’t address this stuff for the rest of my life in a proactive way, I was going to die, or I was going to get locked up in jail for doing something. Because I didn’t care when I was angry. 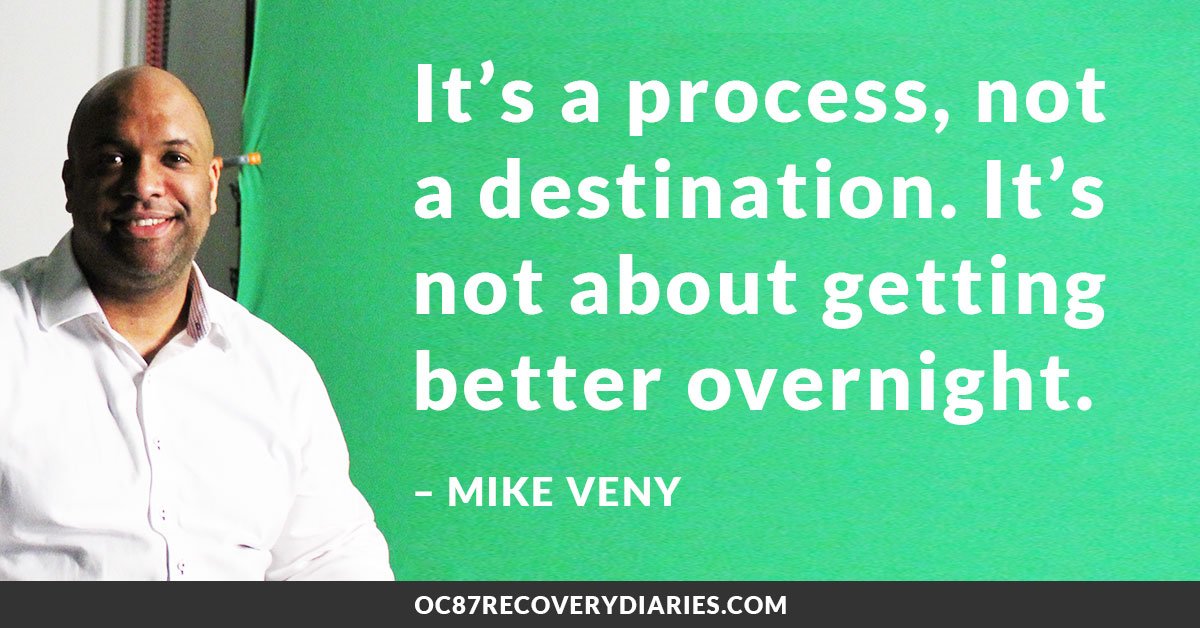 My name is Mike Veny and I’ve got mental health issues. I don’t usually use the term “mental illness” that’s my own choice. I just say mental health challenges, that’s the word I’m comfortable with.

As a child, I was hospitalized three times in a psychiatric hospital. I was expelled from three schools for behavior problems. I harmed myself, and I tried to attempt suicide at age ten. When you have an issue and you don’t talk about it, you give the issue power, and I wanted to take the power back.

According to the National Alliance on Mental Illness, one in five people admit to having a mental illness. That only takes into account those people who admitted it.

Mental illness is an asset because it taught me how to connect with people. Mental illness is an asset because it gave me my musical talent. I’m not alone. There are other people who have experienced the same thing I have. I don’t actually want to be a speaker. I just care about people not dying. Because so many people are dying because they are not addressing these issues.

I think men in general are struggling to find what healthy masculinity is, I mean, what is it?

For me, I also grew up in an environment where a tough guy was like a thug. Or someone who was always in a fight or trouble. So I think men in general are struggling to find what healthy masculinity is. I mean, what is it?

Cut to Mike working out in gym.

I’m gonna lighten up that weight a little. I just had to lower the weight, right there. And for a moment, I felt like less of a man because I had to lower that weight. And I just realized that, that something felt disappointed within me. And I think that’s a lot of my thing, I want to feel like a real man, and I struggle with that. I really do. 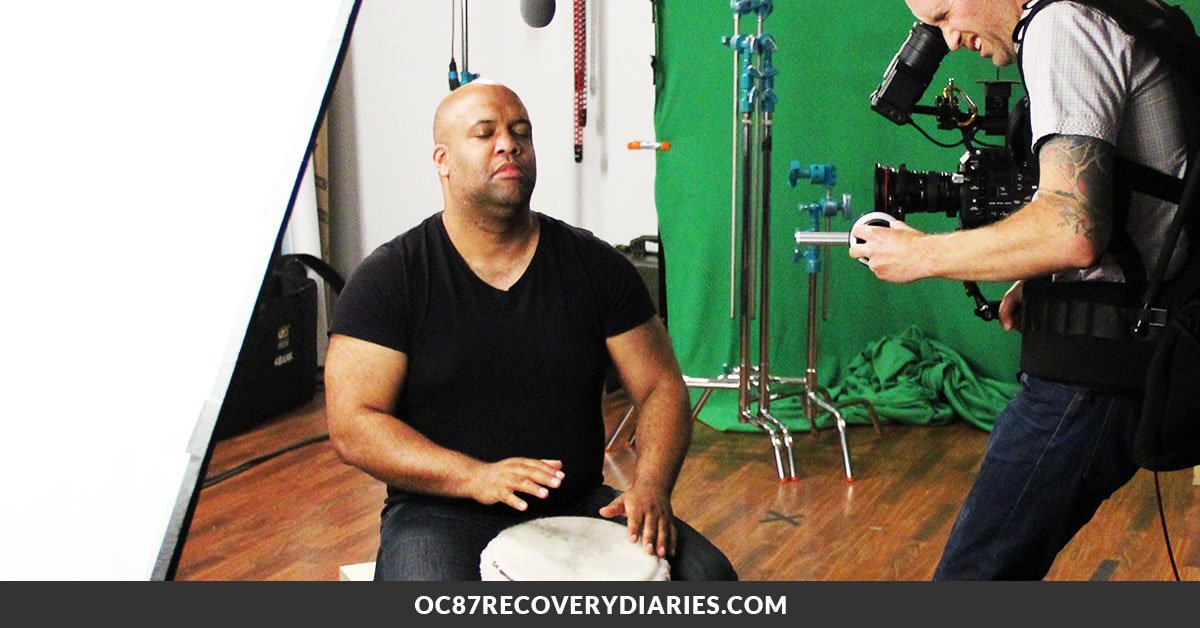 Music is about the internal conversation you have with yourself musically. And simply, when I play the drums, I’m having this conversation with myself. Responding to it.  It takes me outside of myself for a moment. It allows me to zone out. It’s powerful. It just takes me to such a good place and puts me in a better space.

I’ve come to terms with the fact that I think the depression’s here to stay, and that’s ok. And my anxiety is here to stay. I just want it to a point where I can not let it rule my life.

It’s a process, not a destination. You know, it’s not about getting better overnight. It’s about just learning about yourself in small steps and being OK with that.

Isaac Nunoofio felt treating his depression was a hopeless cause, and then he found singing.