A Spiritual Solution to a Mental Health Crisis

A Spiritual Solution to a Mental Health Crisis 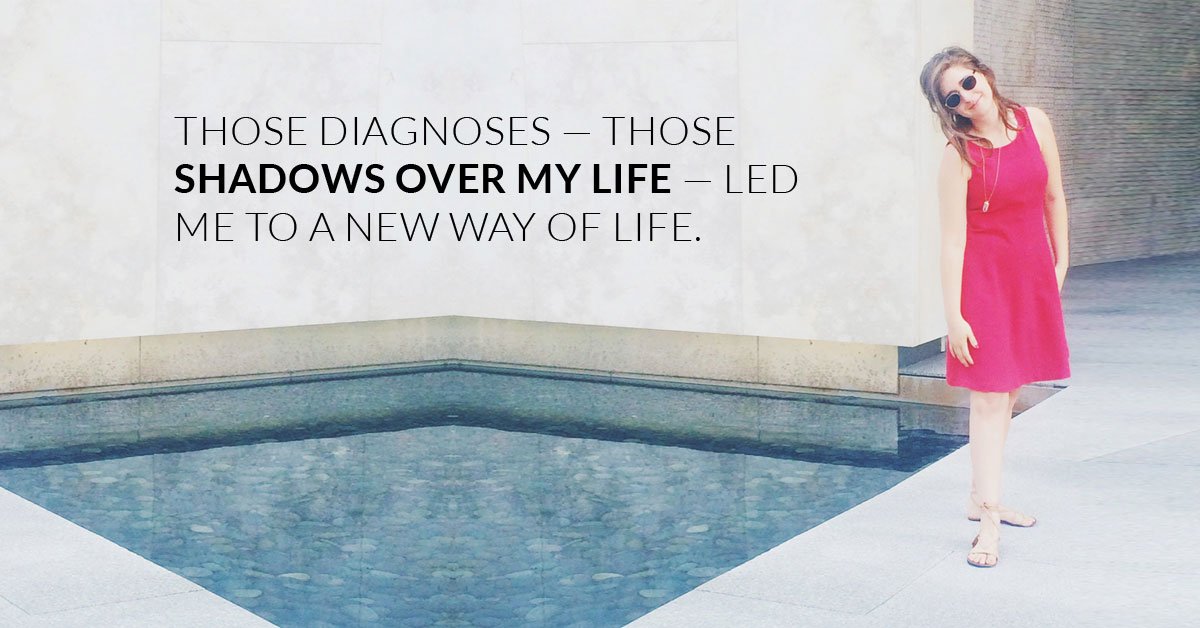 What to say . . . what to say? This is my story. Part of it, anyhow . . . because how can I tell it all? It’s just revealing itself to me. Slowly. Like an iceberg melting. Like the barriers around my heart, melting.

Time has passed, and now I’m ready to write another chapter of my story. I write it with compassion, knowing that my perspective on life will change as time adds new relationships and emotions and tools to my unfolding life. I hope you find a nucleus of recovery somewhere in my story that ignites a sense of familiarity to your own journey — the desire to survive, to connect, to live.

“The hidden can terrify not for what it is, but for its hiddenness.”

– A Course In Miracles

It feels far away, how horrible I felt. I can’t remember now if I really had weekly panic attacks, or if that is just a story I’ve made up as part of my coming-of-age narrative.

I know I’ve told therapists, family members, friends, even complete strangers on the internet, about feeling so depressed that I no longer wanted to live. I know that I have a decade’s worth of journals that document my lack of motivation, my self-centered fear, my tantrums. 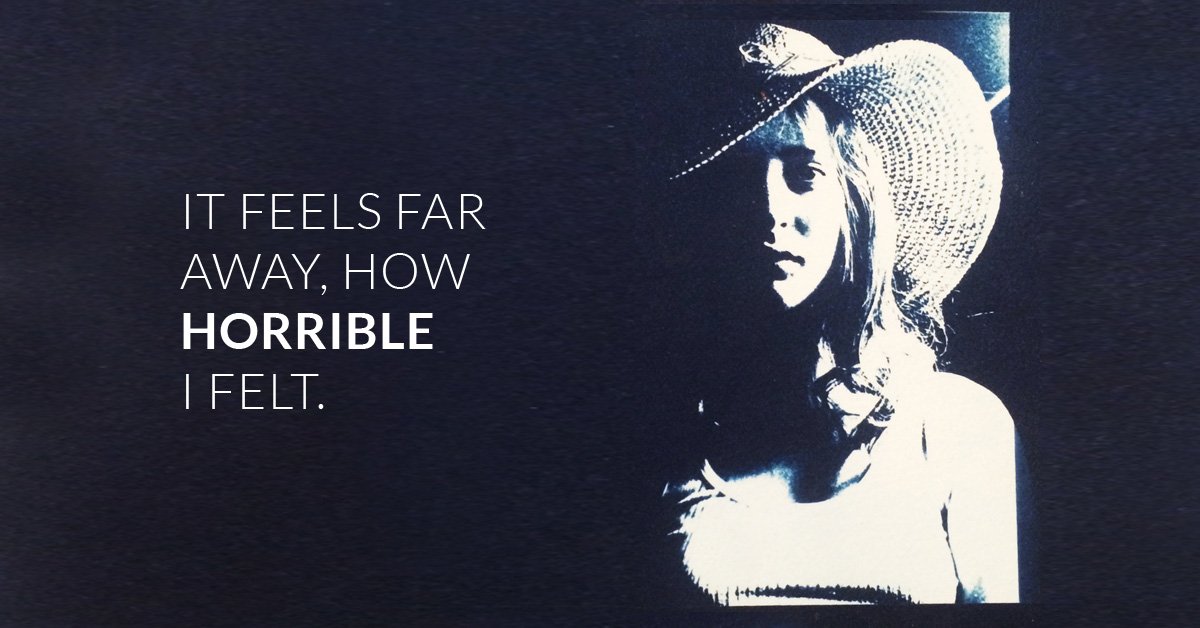 But today that feels so far away, sometimes it doesn’t seem real.

Last night I had a dream where I felt threatened and said out loud, “I must have PTSD from the time I was mugged at gunpoint.” I forget about that too, that I was mugged for twenty dollars at 11am on a Tuesday towards the end of my most recent significant mental turbulence a few years ago.

I felt a range of low level to mega crazy all the time then, and I had for the entire year before — maybe for the nine or so years preceding.

“I’ve learned that fear is simply an illusion based on past experiences that we project into the present and onto the future.”

I grew up with a lot of love and opportunities in a Jewish suburb of Baltimore. When I was seventeen, my mom suggested that I might want to go on some kind of anti-depressant medicine. We were driving down Old Court Road and I snapped at her, very offended.

I’d come out as queer — or maybe bisexual or gay or another word — two years before and had emerged on the other side with a bruised ego. At that time I was sort of long distance dating a boy. My semi-estranged grandfather had just died, and the octogenarian founder of the service club I was president of shot himself in the head. 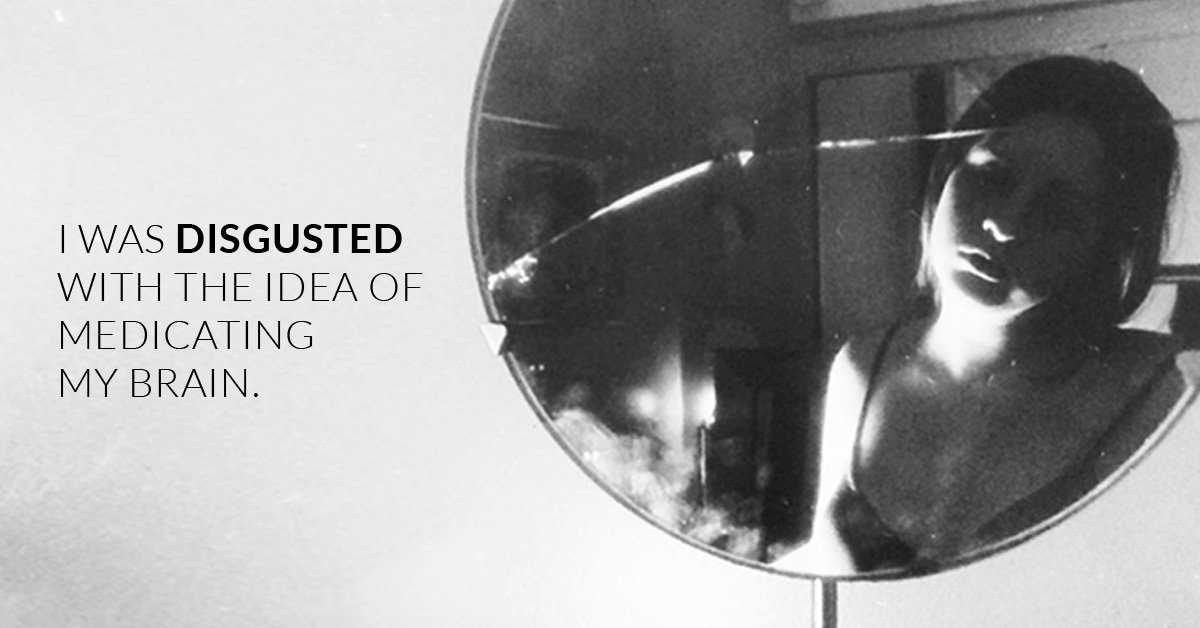 This all seemed surreal and regular and my hormones were probably raging and I hated my mother and I was disgusted with the idea of medicating my brain. I was sad and angry and confused and mostly ok with that. Looking back, I wish I’d had some of the tools I have now to cope with life, but I didn’t, and I was certain that for me, medicine wasn’t the answer.

The next year, however, medicine was the answer — just not the kind prescribed by a doctor. I started smoking pot and drinking, and that seemed to sort out my problems just fine. It also created problems, but they were anesthetized. I had a good time and a weird time and I cried a lot. I transferred between three different colleges, hoping that a new setting for the drama of my inner world would help me to feel more happy.

A lot of wonderful things happened and a lot of crummy things happened. I wanted to make meaningful art, and occasionally I did. I wanted very much to fall in love with a partner who would save me from myself, but apparently that is unrealistic. I wanted to have some kind of magical, mystical life, but I could never find the right words to ask for that, or discover a trap door for initiation into sustained spiritual practice.

I was high. And then very low. And I would have long stretches of feeling normal, and I fancied myself very good at keeping all this to myself, and it was all fine until it wasn’t. 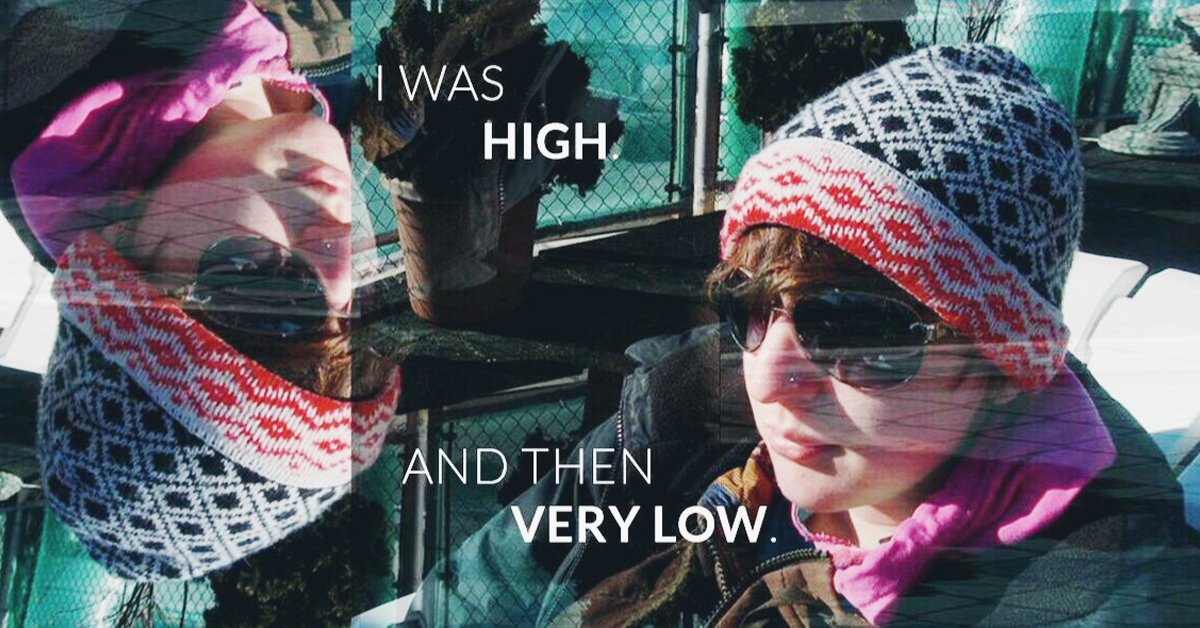 At the end of my last long term journey with active depression and anxiety, I felt purposeless and cloudy and obsessed with myself and the past and the future all at the same time. There was very little space for me to be present with other people or activities. I did my professional work as best as I could, but everything else was falling apart in my outer world.

During that hot, crazy summer, I would sometimes eat rice cakes and hummus, and sometimes I wouldn’t eat at all. I’d sleep for a few hours and then wake up, certain I’d never fall asleep again.

Occasionally, searching for an escape from myself, I would borrow or steal a small dose of Clonopin, which might let me stay knocked out for six hours of relief. But the idea of getting my own prescription (which was suggested emphatically by someone in my inner circle) would indicate that I had a problem. And I did not have a problem. The problems were outside of me! I was certain of this . . . until I wasn’t so certain.

“It takes courage…to endure the sharp pains of self discovery rather than choose to take the dull pain of unconsciousness that would last the rest of our lives.”

― Marianne Williamson, A Return to Love

Meanwhile, little sparks of another way of living began to sizzle at my exterior consciousness and slowly make their way inside. My cousin asked if I was willing to change and introduced me to A Course In Miracles, a metaphysical text on love and forgiveness.

In a brief twenty minutes of solitude, an eye in the storm of the hurricane of my life, I was quiet with myself and a voice within me suggested that I take a twelve week class at The Reiki School + Clinic.

Three months after that, I was trying to read Marianne Williamson’s spiritual book, A Return To Love, while my room was spinning around me in a sea of alcohol. In a moment of clarity I realized that I had to choose one or the other — it was time to give up substances and have a substantial, spiritual life.

I read Spirit Junkie by Gabrielle Bernstein, who is beautiful and sober and another teacher of A Course In Miracles. I wanted what she had and was guided to start praying on my knees each morning, practicing five minutes a day of meditation, and I committed to a week long, hourly fear inventory.

More books and teachers and programs and spiritual tools appeared. I felt good. I cried a lot but it was no longer from panic, it felt like walls I’d erected within my heart were melting. It was safe to feel my feelings. I started cultivating a faith that I was exactly where I needed to be on my recovery path and that more would be revealed as needed.

A network rose around me of other women in recovery who can relate to my experiences and who want to talk about God and healing and forgiveness. With them I’m not stigmatized for my past experiences of depression and anxiety and the solutions I used to medicate myself. I’m loved and connected and learning how to make friends with myself.

The search for love is but the honest searching out of everything that interferes with love.

– A Course In Miracles

I’m a human being with history and attachments and biology. Depression and anxiety and PTSD have graced my life through genetics, enculturation, and being in the wrong place at the wrong time. Today I’m not mad about it. Those diagnoses — those shadows over my life — led me to a new way of life. 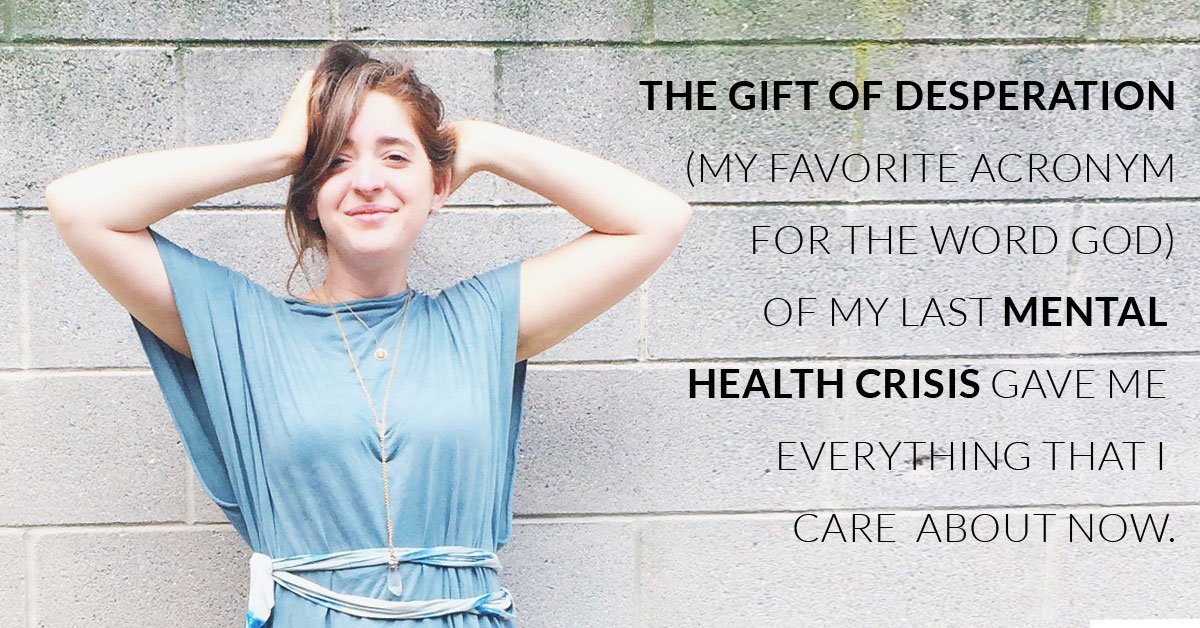 The gift of desperation (my favorite acronym for the word God) of my last mental health crisis gave me everything that I care about now — sobriety, daily Reiki practice, heart-centered connection with other people including my mother, the ability to make a contribution to the world, and a willingness to rely on a source greater than myself for mental, emotional, physical, and spiritual wellbeing.

It’s not that I woke up with a faith that the Universe has my back and was then cured of my insanity. It’s not that simple, but it’s almost that simple. I woke up with that faith and then took action. I started cleaning up my life where it was obviously a mess and I didn’t attempt to do that alone. Teachers, friends, and tools appeared as I was ready to heal. It was and is always up to me to say “Yes” to each new opportunity to get more well and grounded and integrated.

For the moment, prescription medicine is not part of my story. Neither is self-medication with other drugs or alcohol. There is medicine in my life though for sure, and it’s administered daily. The spiritual solution that works for me is ever changing, flexible, both unique to me and also in alignment with many core practices throughout the ages. I’m not alone. I feel optimistic. Most days I’m present with my feelings — depressed, tender, joyous, anxious, loving, fearful, open-hearted — and I greet them with honesty, compassion, and forward motion.

Leah is the designer and website manager for OC87 Recovery Diaries. She has worked on documentary films that have screened on Ovation TV, at the Brooklyn Museum of Art, and on Netflix. She is a graduate of Smith College with a dual degree in the Study of Women and Gender and Studio Art with a concentration in Electronic Media. Leah is also trained as a Reiki master. You can see her work and sign up for her mailing list at withleahmoon.com.

I talk with my kids about my mental illness often. They know Mommy has bipolar disorder. I teach my children that it’s okay to talk about mental illness.