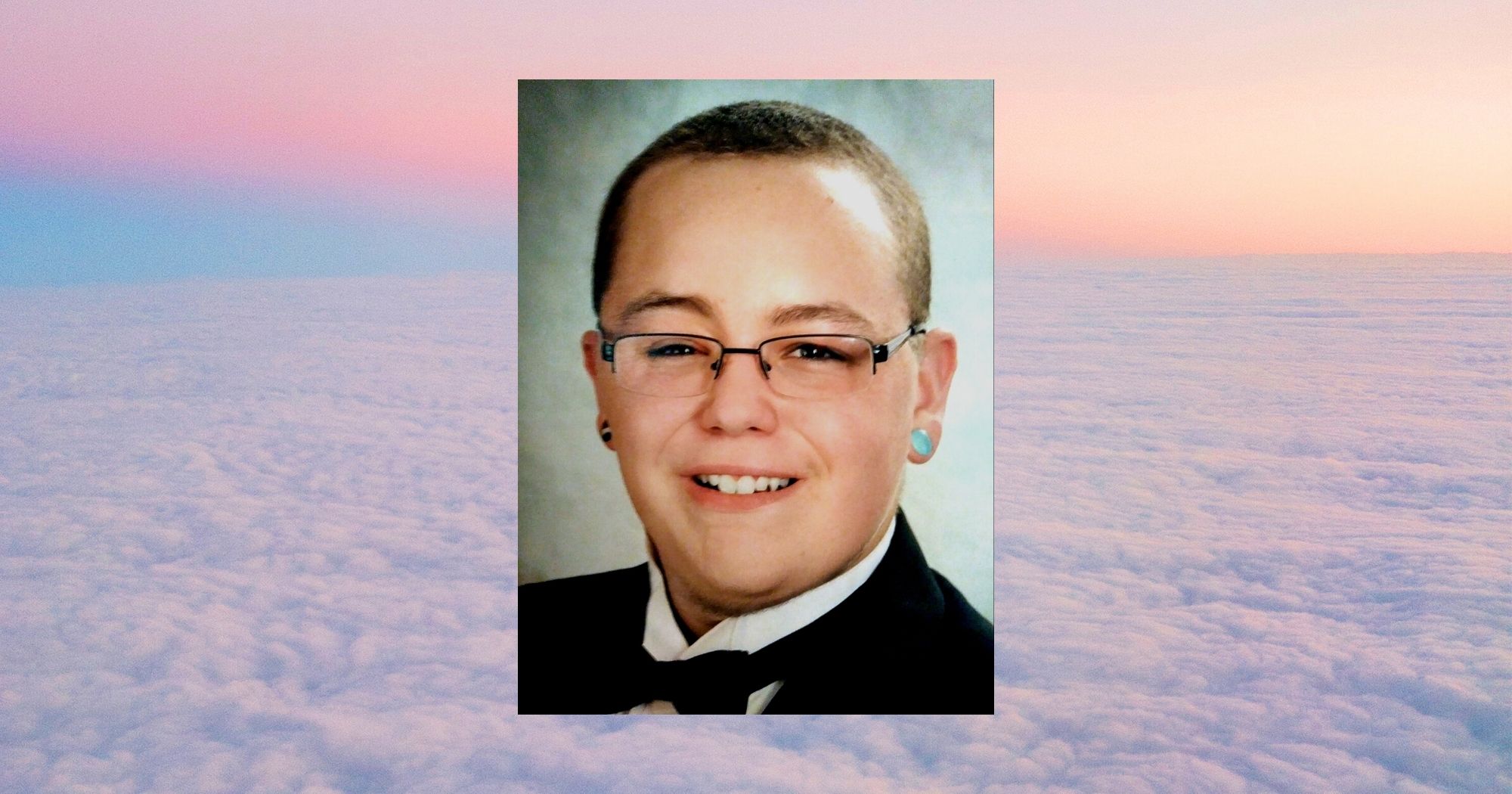 It wasn’t different than any other day. I wasn’t feeling very good, but that was expected. I was put on an antidepressant a few months prior and the doctor had just upped the dose. My mom was taking me to a session with my counselor. I wasn’t mentally safe so we went every week. I’d get up late to miss school, argued with my family regularly, and there wasn’t a day that I’d go without hurting myself. So there we sat in the waiting-room. I got called in and hadn’t got past our typical “how are you?” when she saw my injuries. She asked if something had happened, but nothing had—I was just miserable.

The counselor left to get my mom. They came back and the counselor said that I wasn’t safe at home because I kept self–harming; they wanted to send me to an inpatient hospital. I can still see the fear, sadness, and confusion in my mom’s eyes. It haunts me still today. The counselor let me leave but told mom, “you need to remove everything that he could use to hurt himself from his room.” It made me feel more guilty than I already did and made me wish I never told anyone that I self-harmed. Soon after, we left. My room got cleaned the next day, removing anything that could do harm—razors and soda cans that mom thought I was using. I didn’t stop. I just hid it better. 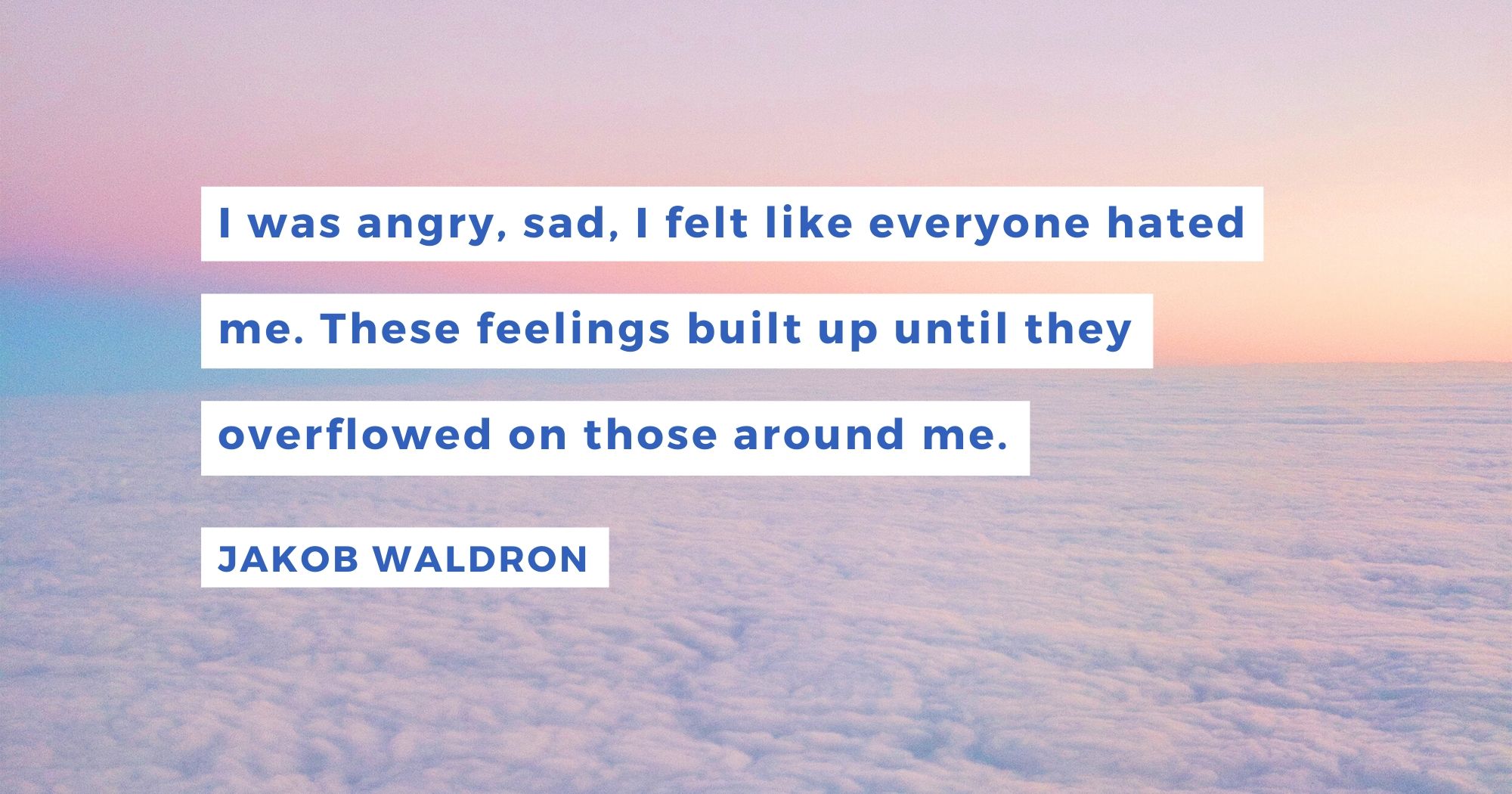 It all started very early in my life. At five, I had a benign pituitary tumor called a Craniopharyngioma [kra″ne-o-fai-rin″je-o´mah]. I had migraines that wouldn’t stop, so bad that I’d throw up. The pituitary is below the bridge of the nose and produces hormones that affect growth, energy, and puberty. The tumor was removed in May, 2004 and I was hospitalized for two weeks. I now have hypothyroidism, meaning my thyroid doesn’t produce enough of the hormones that it’s meant to. I remember a lot of people visiting me before surgery. I didn’t know why, but I’ve realized that a lot could’ve happened. Afterwards, I became withdrawn, centered myself around adults, and gained a lot of weight. These became reasons for people to bully me in school. This is when the depression settled in. It wasn’t too bad but I became self conscious about my weight and the way I looked.

I was homeschooled from first to third grades because I became scared of strangers after surgery. When I went back to school in third grade, I often went to the nurse to try to get sent home early. 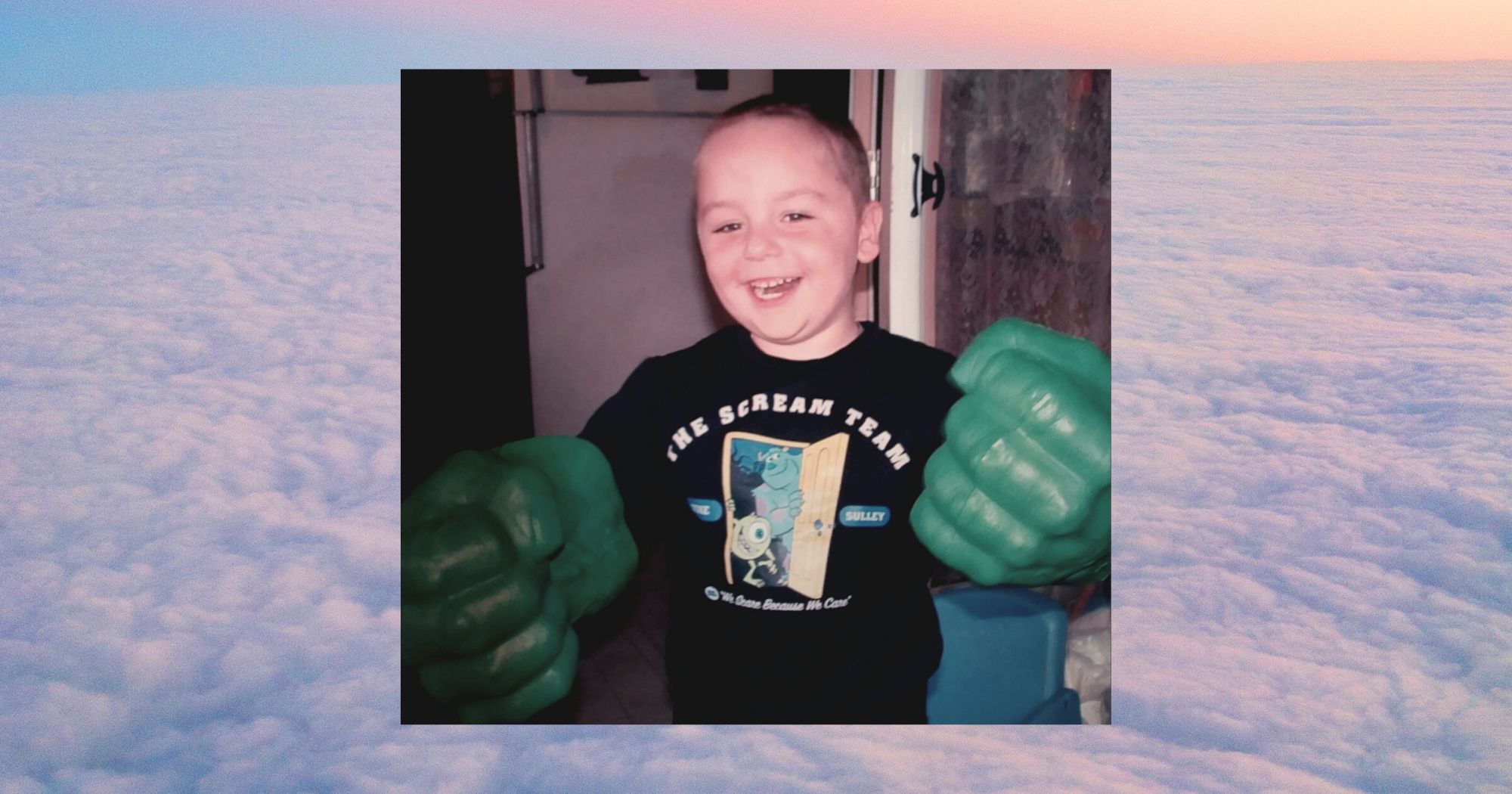 In the higher grades I kept my head down and wore sweatpants because my jeans felt too tight. I would go to the nurse to get away from the bullies. This is when my depression got worse and I started counseling. I hated myself but didn’t have plans to do anything. It wouldn’t stop so we decided to try antidepressants. In the beginning, things were good. But as the dose increased, things got worse. My energy levels were down through the floor, I hated myself, couldn’t focus in school. I felt like my life was shattering before my eyes. The dose was increased again and I started self-harming. I became hopeless. I wanted relief and that was my outlet. 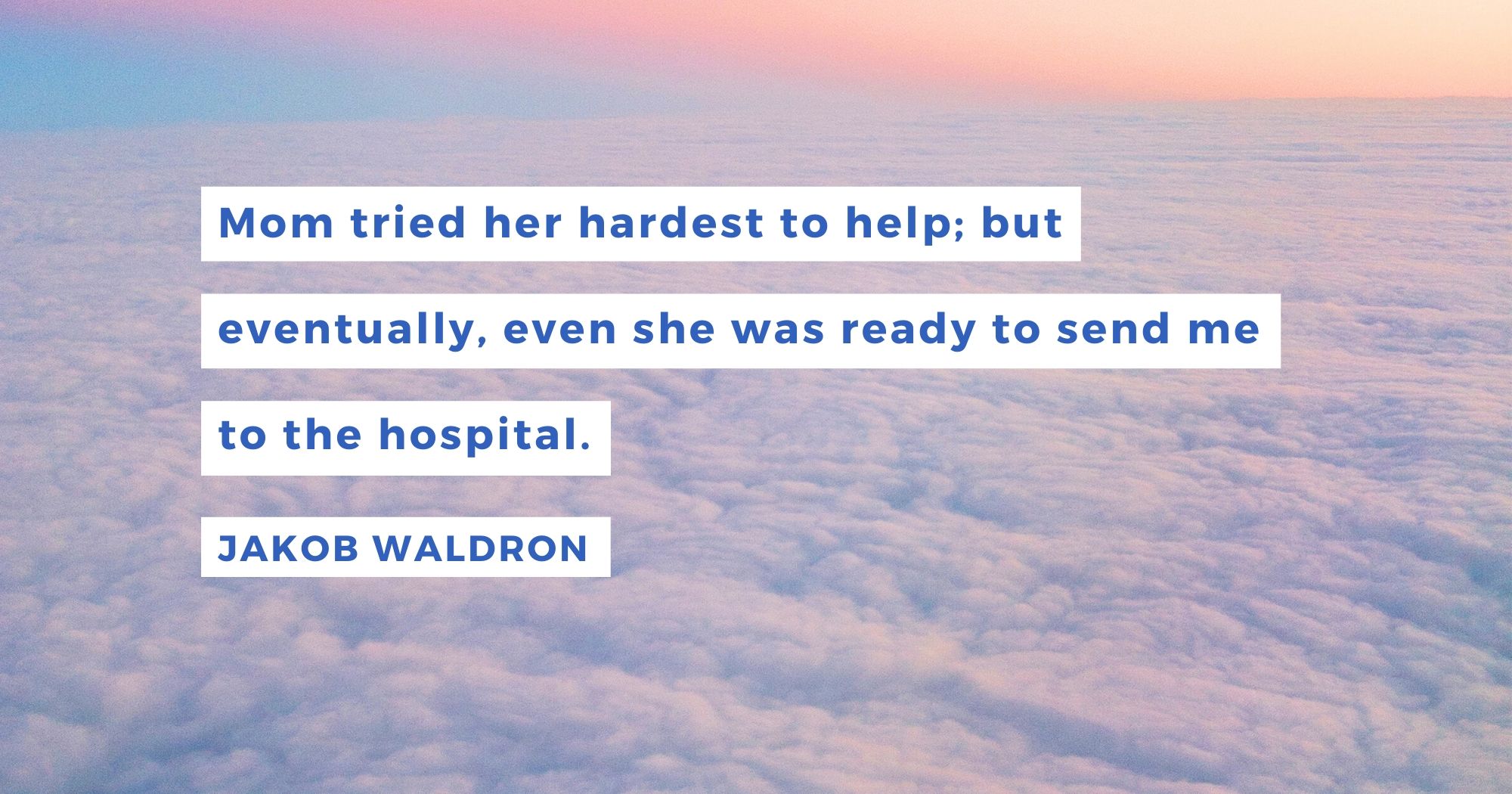 Ever since my depression started in middle school, my brother kept me going. I felt that if I left him when depression runs in the family, I would be forcing him down the same path. If I stayed and he got depression, I would be there to help him. It started with the realization that I was fifteen and wasn’t a good brother. He was ten and I kept venting to him about everything, right down to our dad not being there. Now he doesn’t look at dad like he should. We felt abandoned and unwanted because dad wasn’t around. I don’t know how my depression affected my brother, but we aren’t nearly as close anymore.

I was angry, sad, I felt like everyone hated me. These feelings built up until they overflowed on those around me. My father is bipolar. He has his own struggles but they affect us a lot. He’ll be upset and put it on us. It makes my mind go into overdrive. Then my mom and brother have to deal with their problems and us being upset. I’m an empath so I’m sensitive to other’s feelings. I feel their emotions, but intensified. Even worse, I always feel like I’m screwing up. Whether I’m cleaning, on the couch, or laying in my room, my mind runs rampant. I’ll sweep and worry that I’m not doing good enough. I’ll make coffee and worry that I’m being too loud. I’ll stay silent when someone talks to make sure that I’m not doing anything to upset anybody. 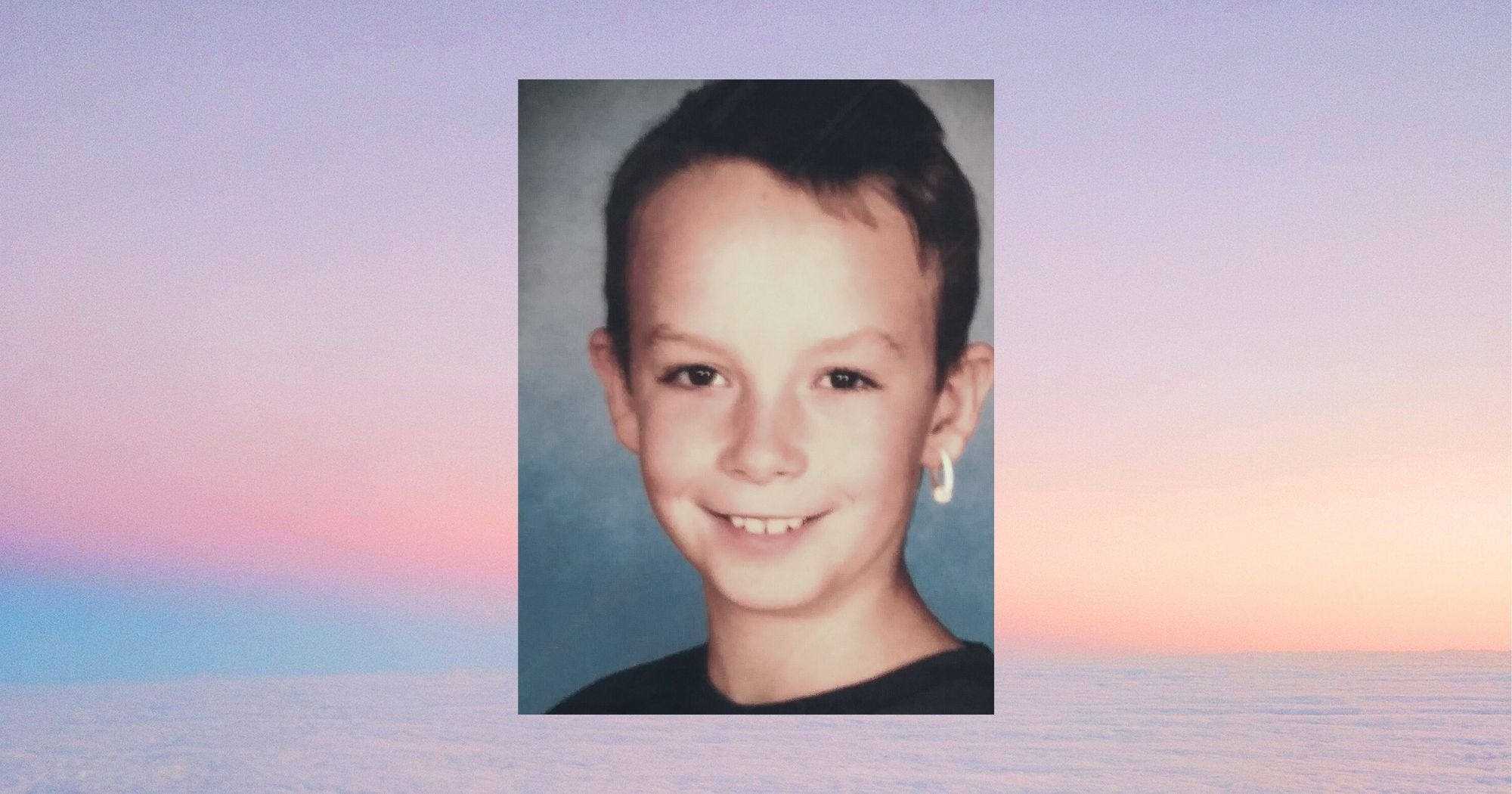 I had one friend I met in third grade, but he changed when things got hard in middle school. I went to him to talk about everything, even my family situation. I had told him my deepest feelings. He seemed to care but eventually I realized he was just spreading rumors. Soon after, the psychiatrist increased my dosage to its highest. This is when I started arguing with my parents, self-harming daily, sleeping late so I’d miss school, and failing my classes. Mom tried her hardest to help; but eventually, even she was ready to send me to the hospital. I didn’t even care. 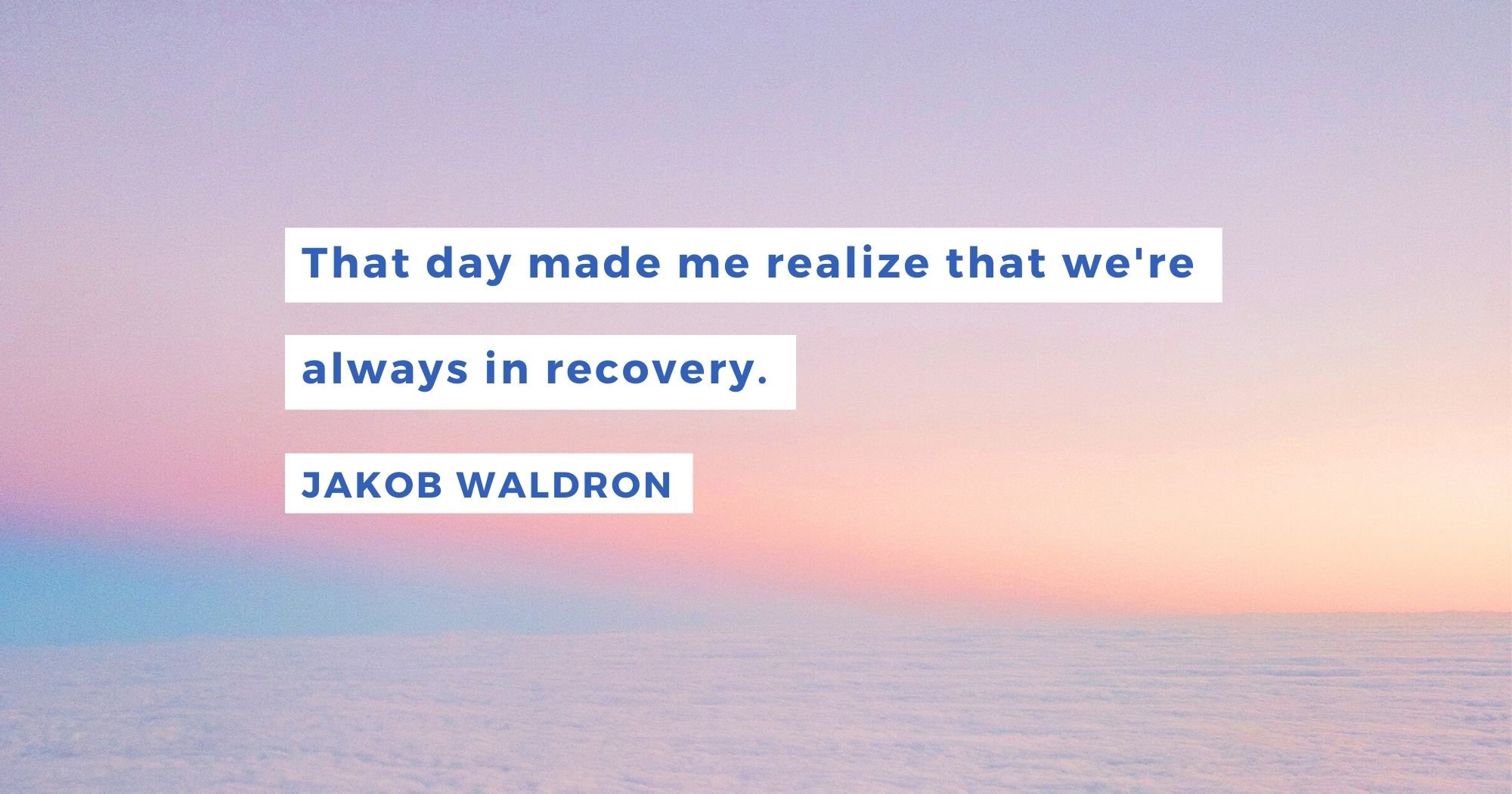 I thought the same result would come either way: my suicide. This is when that friend said something I’ll never forget. It was lunchtime and he said, “Everybody thinks you’re psycho. They think you’re going to shoot up the school. Even other school districts are scared.” It was so bad that if someone said a joke or poked me, they’d say “Sorry! Please don’t hurt me.” When he started giving out my Instagram name to harass me, it had to stop. I tried to block him out but he just got closer. I changed seats in class but he moved closer. He made me hate school and everyone there. So much that I didn’t attend my graduation or senior trip. I just wanted to get out of there.

Eventually, I turned to a video game called Clash of Clans to make friends. Finally, I’d found a group where I fit in. Online, we joked around, they picked me up, and they struggled the same as me. There was someone in the online clan, who I will call K, that didn’t like me. We always argued. But his partner at the time, E, always calmed us down. After a while, we started talking and became best friends. Regardless of my anxiety, they were easy to talk to. They were people that I could trust. They owed me nothing but gave me everything. They had become two of few people that I could talk to. E gave me ideas to help stop self-harming like meditation. More than anything, they’d listen while I vented. We talked about anything. Other times, they sent me songs that related to my feelings. They were the people who helped me realize that self-harm wasn’t worth it and that your situation can get better with persistence. E struggles with depression too, so she was very helpful. I realized how much she understood me the day that she relapsed and I helped pick her up. That day made me realize that we’re always in recovery. Now I consider them family just like my blood relatives. 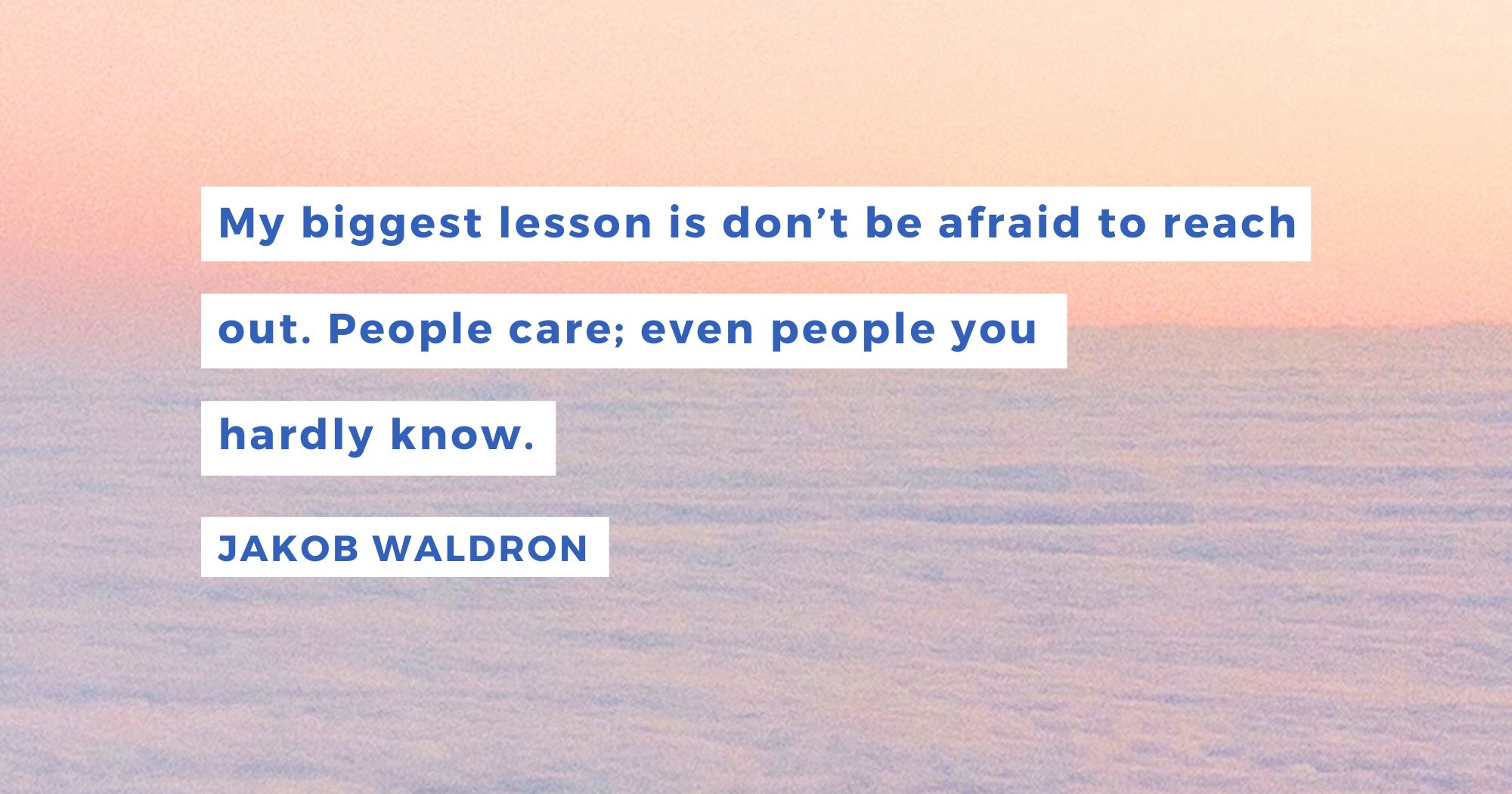 Speaking of blood relatives, my uncle Ron also helped me a lot. He suffers with depression too, sometimes debilitating. He gave me a home away from home and someone local to talk to. He taught me different outlets like wood carving and how to play the harmonica. I didn’t know him very well up until my late teen years. But once he heard that I was struggling with depression, he got ahold of me as soon as he could. He became one of my closest friends from that day on. My aunt and him would pick me up almost every Friday and I would spend the weekend there. We went to Vermont, the movie theatre, or just to get ice cream. He gave me the love and respect I always wanted from my father.

My antidepressant dose was lowered and another was added as a mood stabilizer. Over time, everything got better. Before, I expected every day to be my last. I didn’t even want happiness but here I am five years later. I can happily say that I’m four and a half years clean from self-harm. I still don’t honestly know how I survived. My biggest lesson is don’t be afraid to reach out. People care; even people you hardly know.

Jakob loves nature, reading, writing, and helping anybody in need. When he is not spending time with his family and pets, he enjoys drawing, making quotes, and hunting and identifying mushrooms. He lives in Upstate New York and is currently searching for his soul purpose. He loves finding and helping other mental/medical illness survivors and lives by the philosophy that “if [he] can help at least one person, his struggles balance out.” He believes that no pain is for nothing. Everything that we deal with is meant to benefit us in one way or another. He's only 21 but he's determined to make the world a better place and help as many people as possible. He is more than happy to connect with anybody that has any questions or just wants to talk.

AnnMarie Otis is a fighter; doing battle with cancer and depression every day of her life, and every moment of every day. Join her fight and cheer her on.