Is Mental Illness Your Rabbit, Too? Living with Anxiety and Depression - OC87 Recovery Diaries 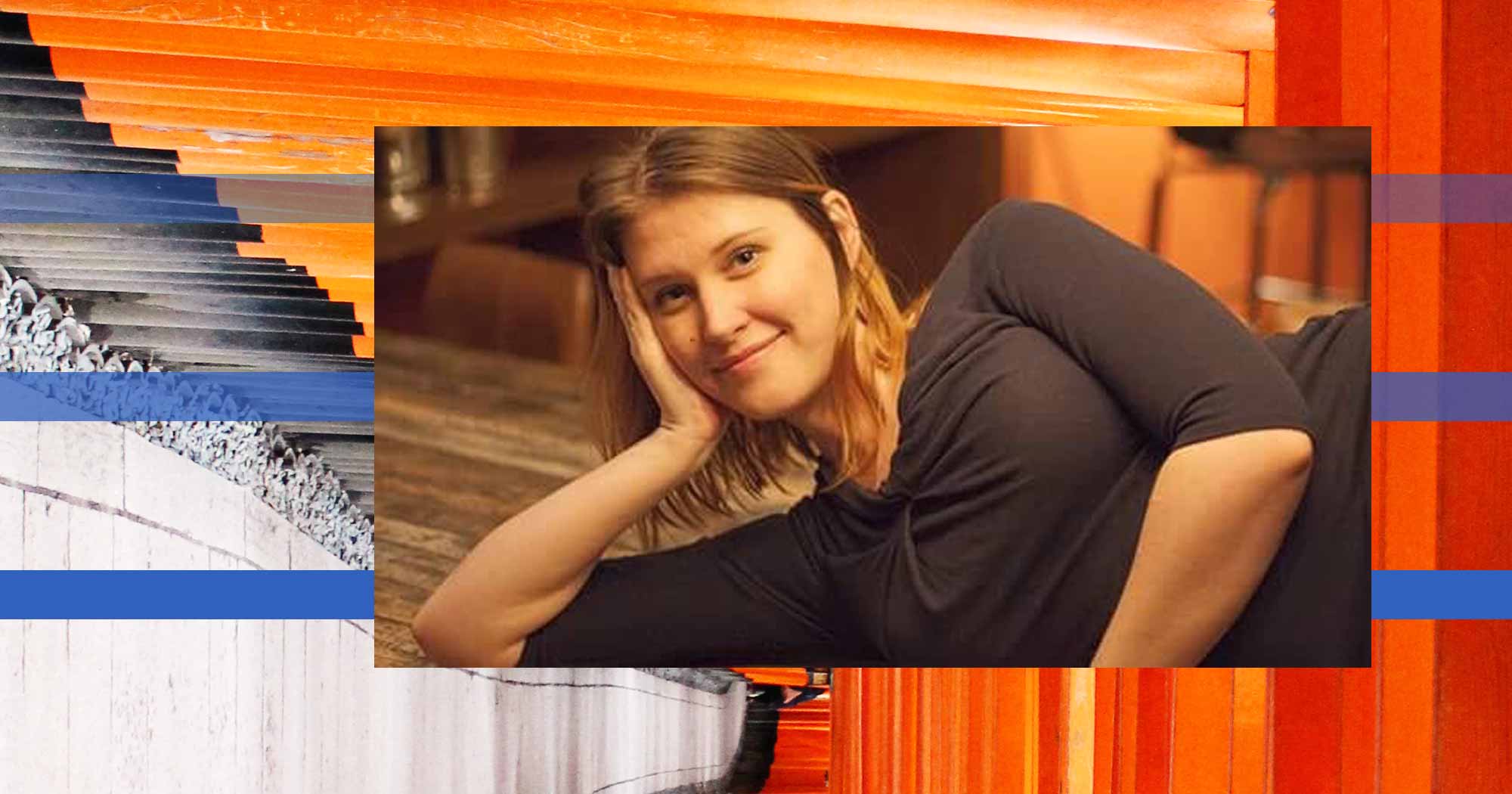 Is Mental Illness Your Rabbit, Too? Living with Anxiety and Depression

In the fall of 2015, I started seeing rabbits. Not hallucinations, but rather some of the smaller and fuzzier denizens native to Cambridge, Massachusetts. One rabbit established a den near my apartment, and I could see little rabbitlings cavorting about in the summer grass. One brisk autumn night, I saw two rabbits looking up at a particularly beautiful full moon.

There is no metaphor more fitting for the person I was back then: twitchy, easily startled, a propensity to run scared from others. I had just finished grad school, and I found myself in a wasteland. The relationship I’d sustained for years had crumbled. I was jobless (save a few cobbled-together gigs). The bright thread of ambition, curiosity, and drive that had gotten me through the worst experiences of high school, college, a teaching stint abroad, and graduate school had been…lost.

I had lost all the avenues I’d had to hide from depression and anxiety, and they closed in like a pair of gangsters in an alleyway. 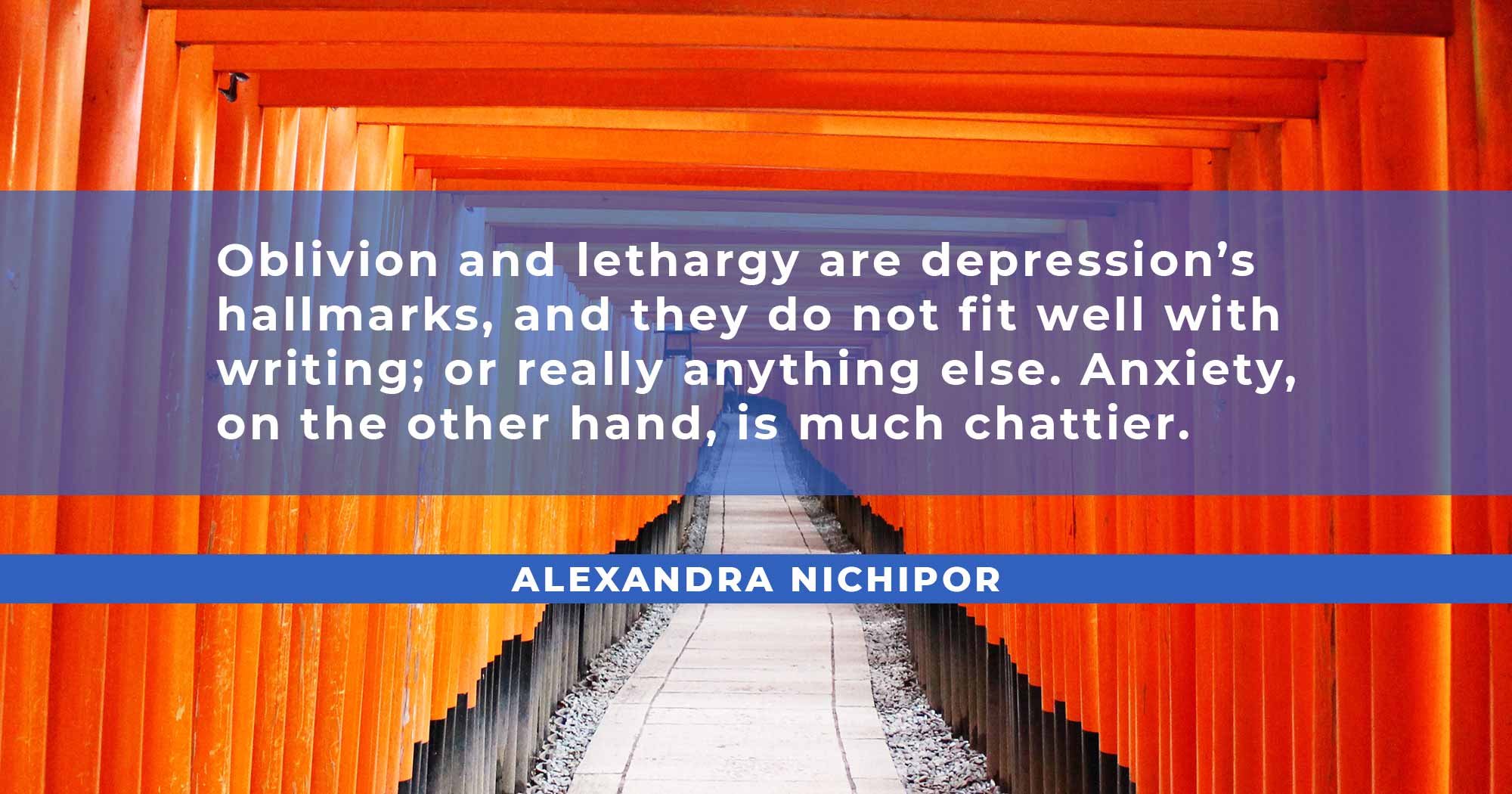 These diagnoses are major players in my life, and have shaped me as surely as my parents or teachers or friends. I’d hid from them behind the perfect-girl façade of excellent grades and extracurricular achievements, I’d lost them in the socially-acceptable culture of low-level alcoholism on my college campus, I’d taken brief refuge from them in the arms of lovers and friends. I’d insisted I was only having a bad day, a bad week, a bad year. What I did not understand was that depression and anxiety are as real and as unremitting as diabetes, chronic and recurrent, and you cannot brush them off as you would a fly, or a bad day.

You are moving about in the world when suddenly a color disappears, replaced by grey. You don’t notice it at first, but then another color winks out and greyness takes over. Soon, you are walking in a monochrome world. A mist rolls in, a heavy one, and it feels as though someone has attached weights to your ankles and wrists. Slowly you go about from day to unending day, and death waits for you at the far end of a long dusty road. Oblivion and lethargy are depression’s hallmarks, and they do not fit well with writing; or really anything else.

Anxiety, on the other hand, is much chattier. If she was a person she would be a ragged, shrewish dark-haired thing, like the girl from the Ring if she exuded petulance rather than abject terror. Her voice would be high and whiny, insistent and relentless.

Here’s how it goes:

While standing at the bus stop, I muse that my throat’s been hurting a bit. Perhaps I should swing by CVS to get some lozenges. Anxiety is right there at my elbow, smelling an opportunity. “Hmm, sore throat, ear pain, swollen lymph nodes. Could be cancer. I wonder what stage it is.” 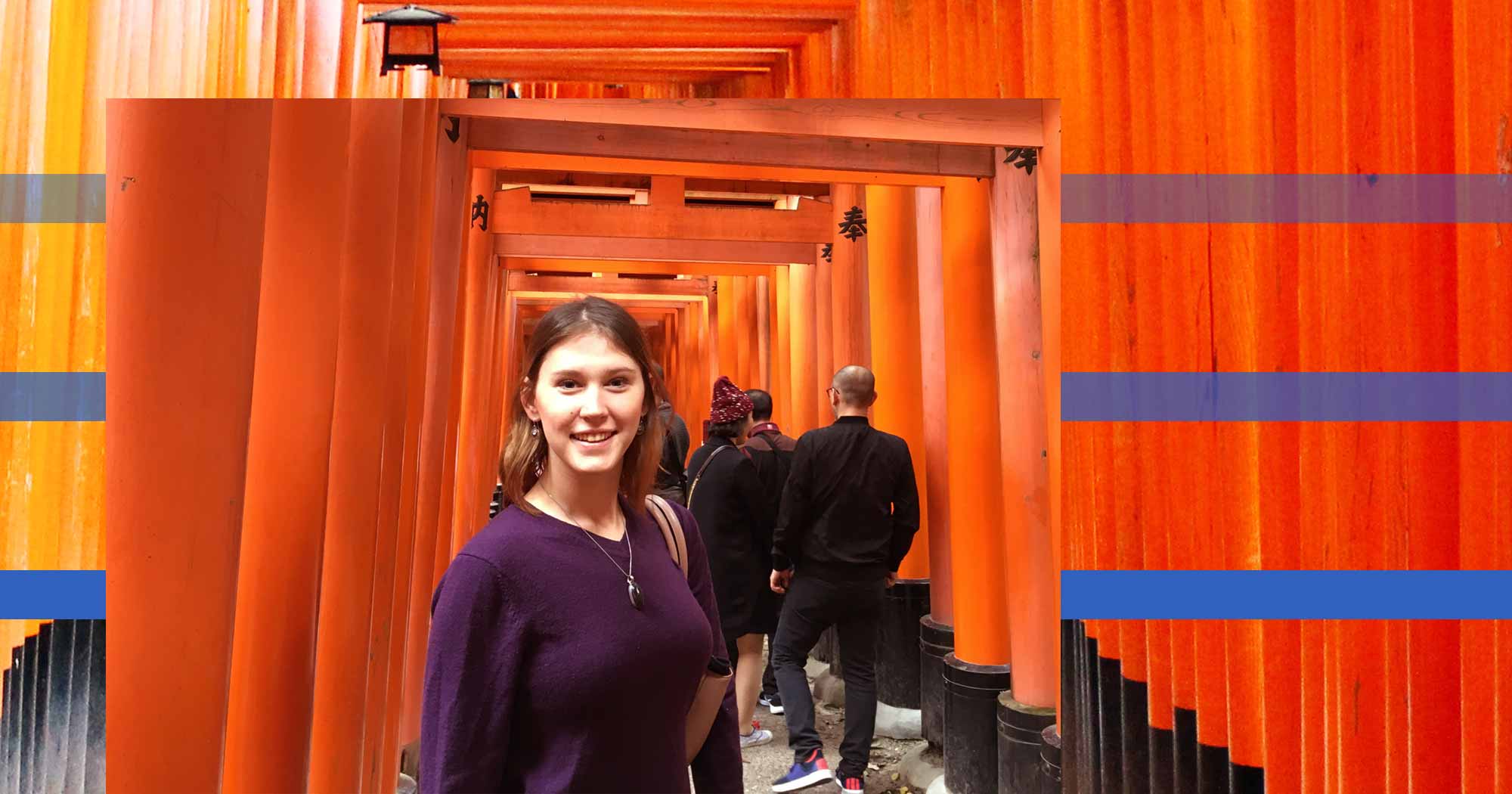 “I don’t think it’s cancer,” I reply calmly. “I think it’s probably winter in Boston, and I’m a bit under the weather because I haven’t slept well. I think it would be very odd for me to have throat cancer, because I am a 28-year-old woman who doesn’t smoke and I take good care of myself.”

Anxiety splutters now, flummoxed by logic, seeking another way in like a dog or a velociraptor, testing for weaknesses in a fence. “But you don’t know! Epstein-Barr raises the risk for throat cancer, and you have that, you had mononucleosis as a kid! Cancer! I wonder what stage it is. You were having trouble remembering where you put that thing this morning—I wonder if it’s spread to your brain.”

“That’s true, I did have Epstein-Barr,” I answer, against my better judgment. “But so does something like 80% of the population.”

“80%? Are you sure?” Anxiety is cunning, and she looks at me almost coyly. “Better Google it.”

That’s a low, dirty trick and I won’t fall for it. I turn my headphones on and board the bus. Denied, she changes tactics and becomes petulant. “But your throat, your throat!” she hollers, jogging alongside the bus, waving her arms at me. I turn away from the window and stare at the baseball cap on the head in front of me. 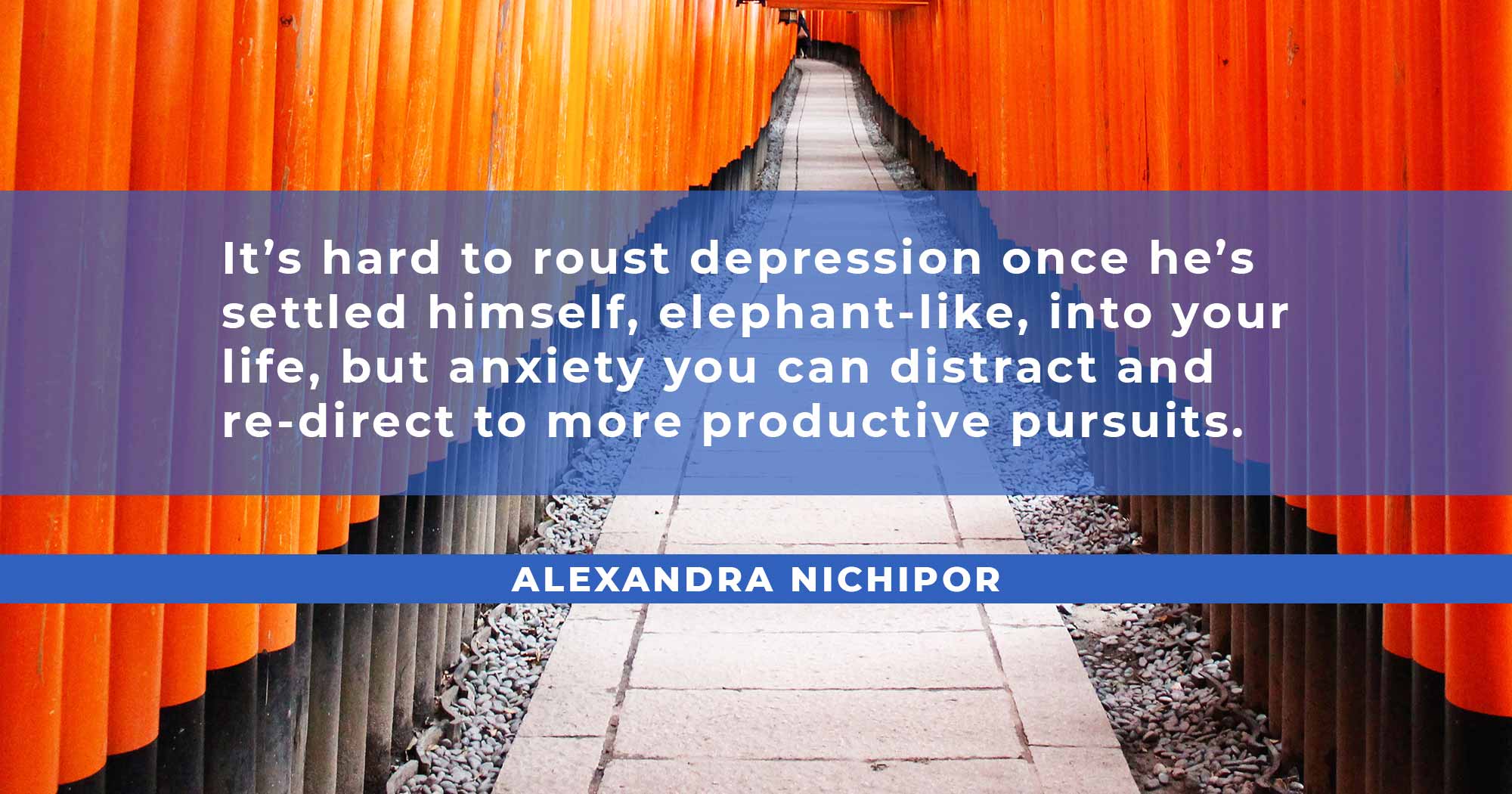 I wasn’t always this good. In the past, I have engaged with her, followed her down her twisting labyrinths. She’s grabbed me by the neck and sunk her claws into me. I can’t always get away from her voice.

It is, of course, not quite this dramatic. I do not hear voices though, like most people, I have certain lines of thought running through my head at most times, and one of them is anxiety. Gradually, the strand of her chatter became easier to hear, became like a different color in my mind, and I learned to listen to it less; respond less. 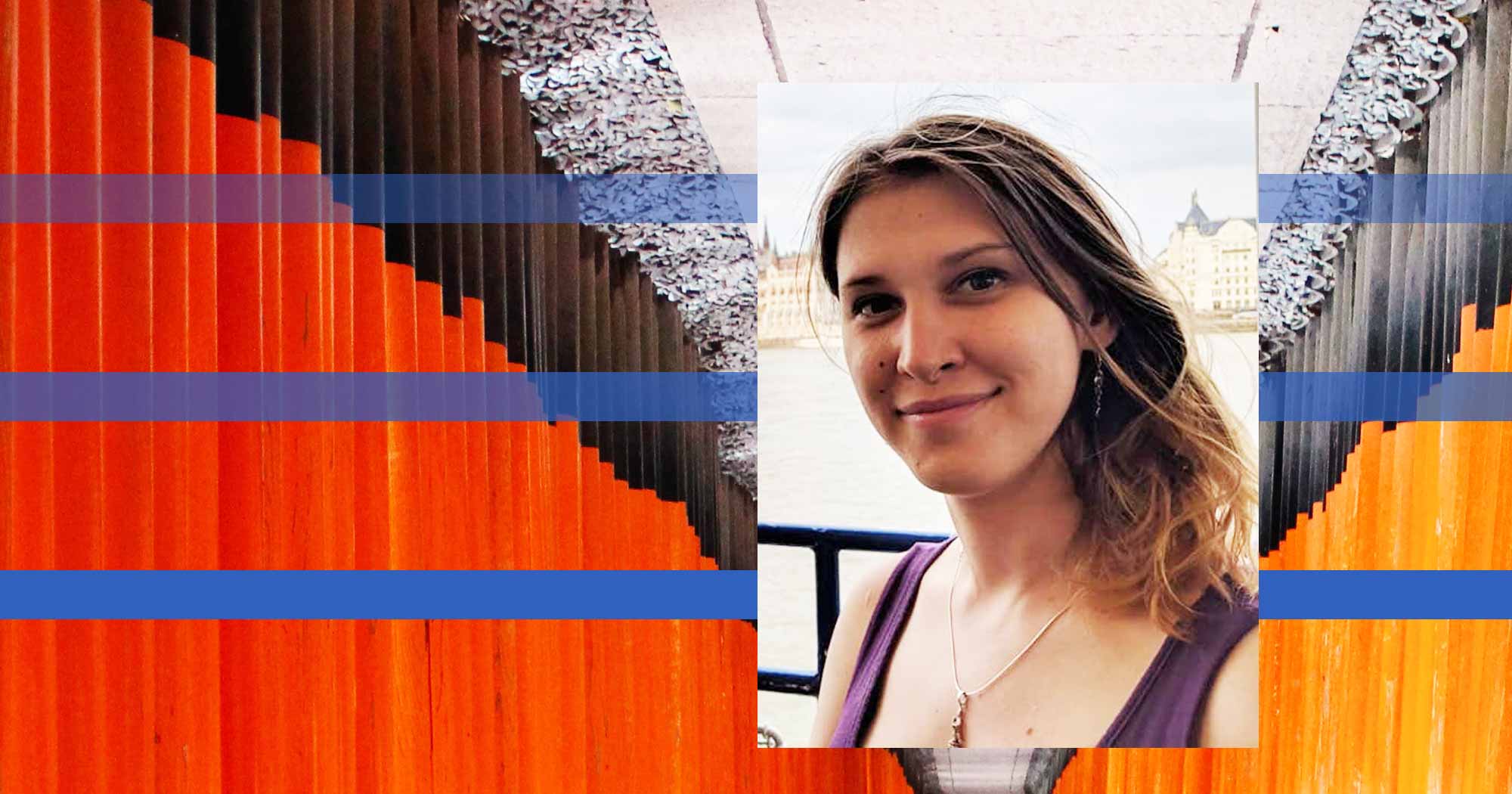 Certain things help: writing, antidepressants (which are truly like insulin for a diabetic), exercise, meditation. Creativity is the opposite of fear, and therefore of depression and anxiety. It’s hard to roust depression once he’s settled himself, elephant-like, into your life, but anxiety you can distract and re-direct to more productive pursuits.

I began to realize that anxiety and depression had a shadow, an invisible third like the final boss in a video game—self-destruction. The feeling that you don’t deserve to feel better, that you aren’t allowed to be understood, that, at the core, you aren’t worthy of a life without ceaseless anxiety or the colorless, crushing cloud of depression.

Self-destruction is formless; like the ether. It sneaks itself through the cracks in your thoughts, imperceptibly hardening, becomingthe mortar between them. No; of course you shouldn’t try that, you won’t succeed. You can’t eat if you’re hungry. You don’t deserve this glass of water. 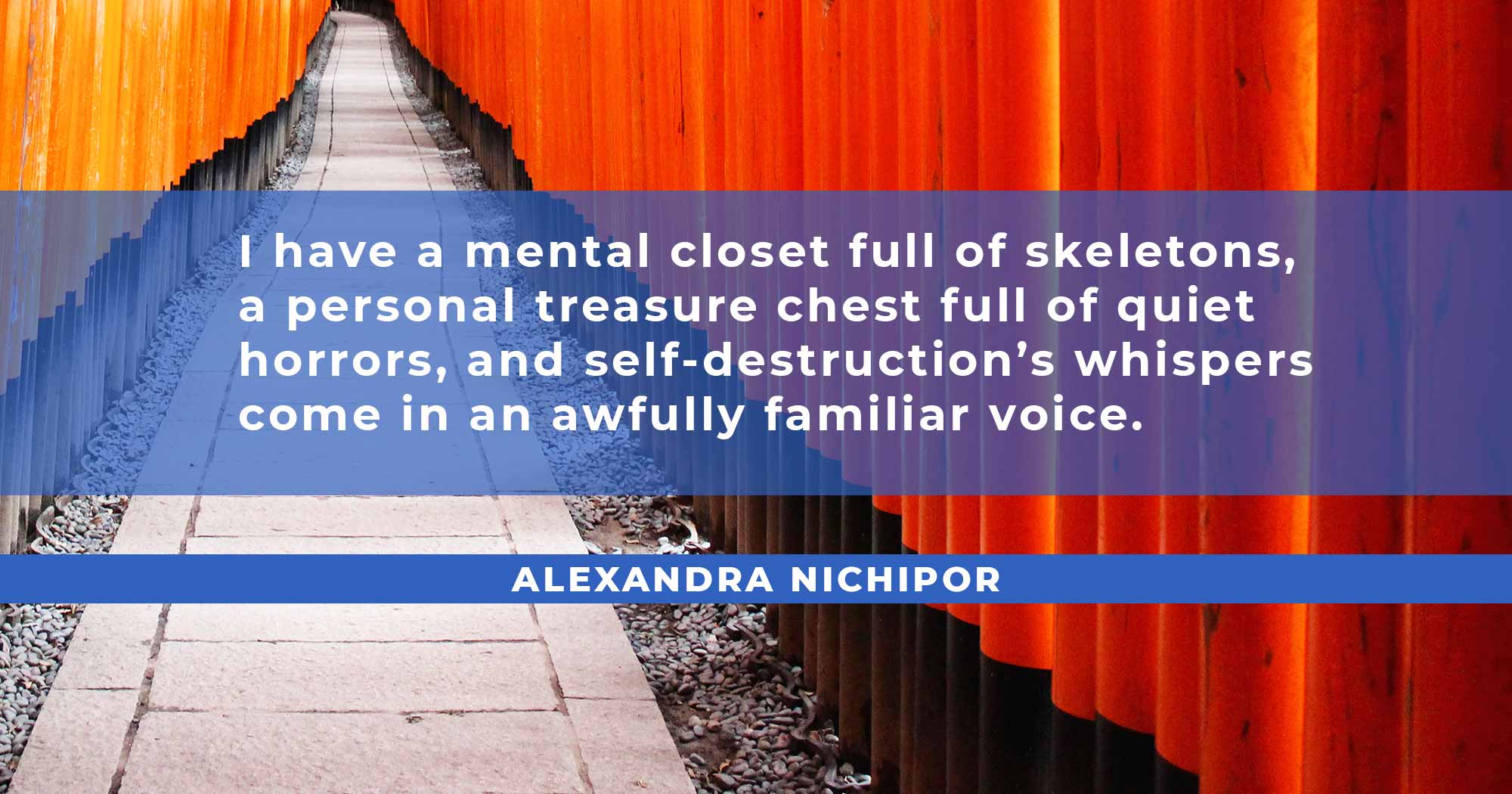 And so we become endlessly efficient. We tear ourselves apart so that our abusers don’t have to lift a finger.

I wonder about self-destruction’s origin story. Like so many people, I have a mental closet full of skeletons, a personal treasure chest full of quiet horrors, and self-destruction’s whispers come in an awfully familiar voice. But instead I ask—why is it that we hate ourselves so much that the hatred of anyone else can feel like a distant memory, a far away color? It seems familiar, almost, something you can go back to. If you rip yourself apart with anxiety, any cessation feels like heaven. You hold the power of ecstasy in your own hands.

What is so intoxicating about hating yourself? You have control over it, that’s one thing. For once. You alone are the tyrant; you alone can bestow or withhold approval.

You are the hateful king you must please, but my God, that makes you royalty, doesn’t it?

But what if you let it pass through you? What will you do when you fall into a mirror and it’s your own arms that catch you? When you find God within yourself and love her fiercely?

It occurred to me then that I have two rabbits in my soul, curled together toe to tail like a furry little yin-yang, one dark and the other light. The light rabbit is soft and soundly sleeping; purpose, altruism, generosity, humor, creativity. She presides over the good things in my life—my writing, my determination to help others, my sense of humor and my curiosity. 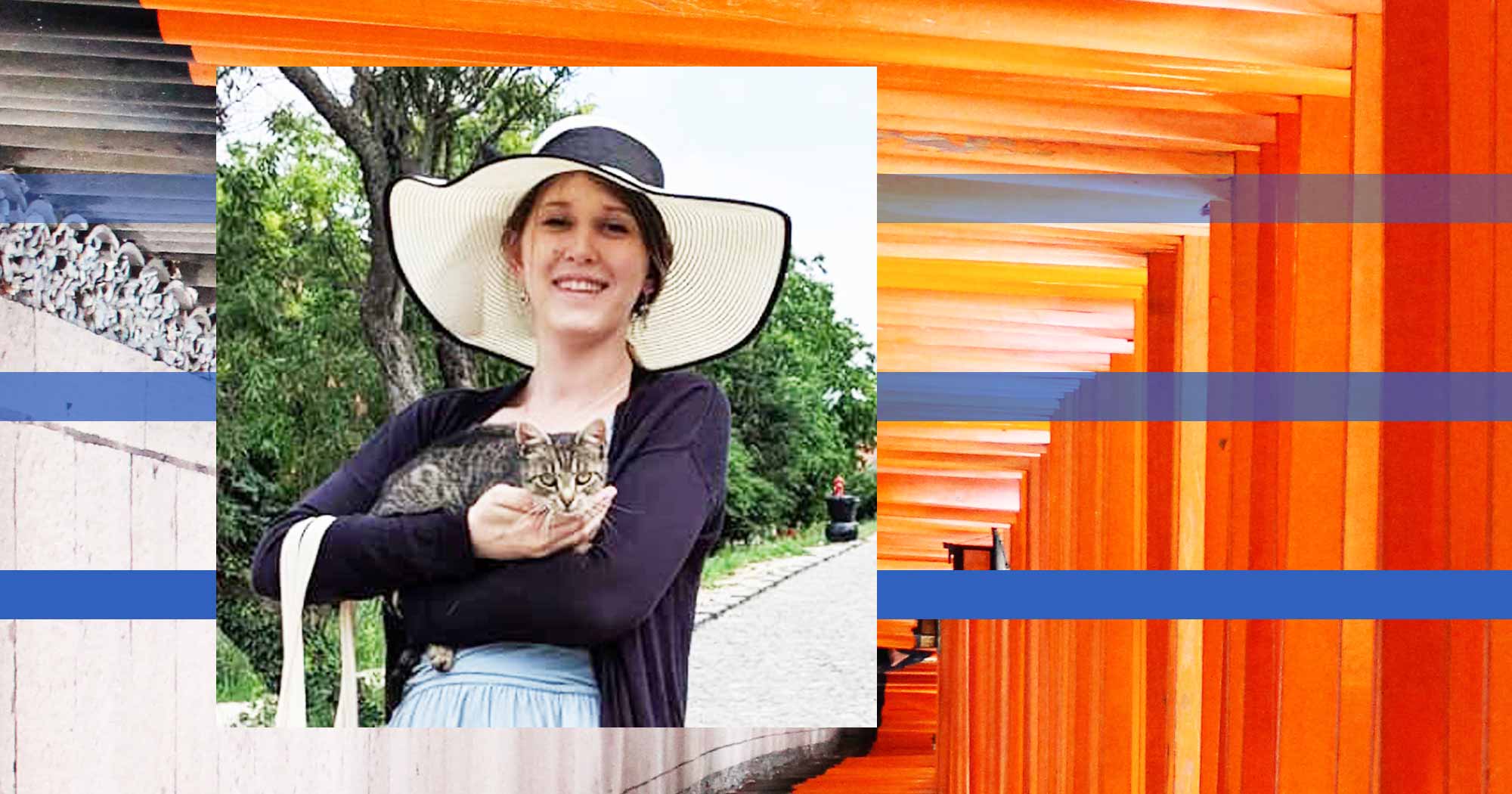 The dark rabbit—twitching, impish, restless—is the ruler of depression, anxiety, self-hatred, loathing, those things that still my tongue and make me treat the people around me a little more cruelly. The fact is that one wouldn’t exist without the other. I wouldn’t have my good qualities if I hadn’t been through what I have experienced; all of it.

The rabbits have full run of my soul and, all too often, they pull me after them, so that the dark rabbit rules and I am back under the yoke of anxiety or depression, dragged along by self-hatred and lost within myself. Other times, the light rabbit is in command, and I am able to laugh, to joke, to write stories and to make peace with the people around me.

I might lose myself running after the one or both of them; I might even catch them sometimes and hold them in my arms. But, in the end, I am neither one of the rabbits. I am the wolf that watches them, aloof and free, and I can choose my own actions. No matter what happens, no matter which one I chase, I am not the rabbit—I am the wolf.

And so are you.

Alexandra Nichipor holds a master's degree from Harvard University, and presently works in medical research. She has generalized anxiety disorder and major depression, and primarily uses mindfulness to cope with these.