The Narrow Ledge of Half-Health; My Life with Schizophrenia - OC87 Recovery Diaries 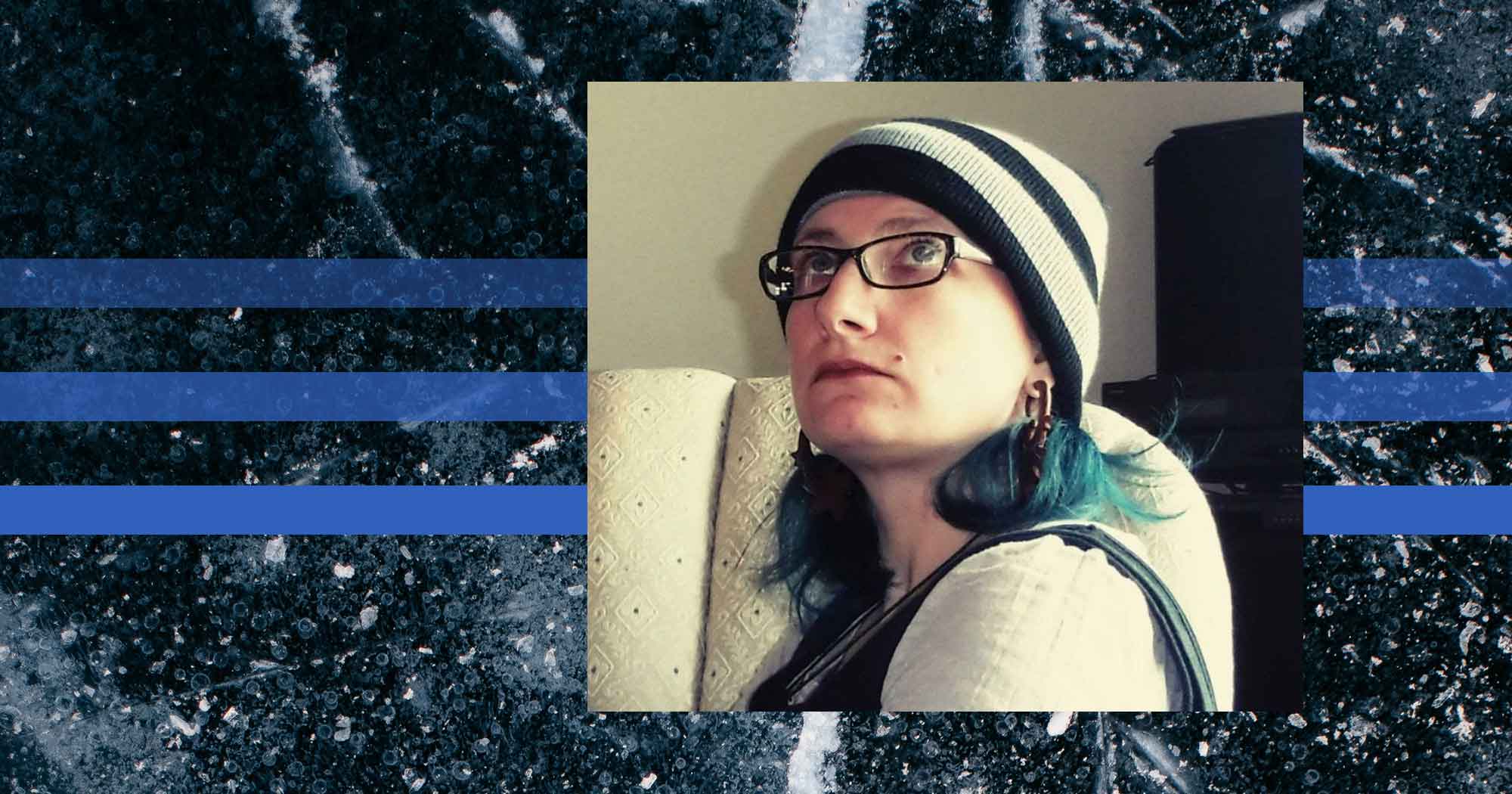 “We don’t want them driving.” Mariah grinned at me in a tease that only a little sister can master. She linked arms with me and we walked toward DMV, where I would surrender my driver’s permit for an identification card. Her wry comment was meant to make me laugh, and it did, but her words would become the voice in my head for a long while, gently reminding me, “You can’t.”

“It’s all about the medication,” Dorothy said as she handed me a tiny paper cup with five pills in different shapes and colors. “If you don’t take it, I’ll have to call the hospital.”

I’d been off meds for six days, and although I swallowed them, I became “medically non-compliant” again that weekend, and she followed through with her threat. My mom heard what Dorothy said, and believed her so strongly that she continued to repeat the phrase, “It’s all about the meds” for years. 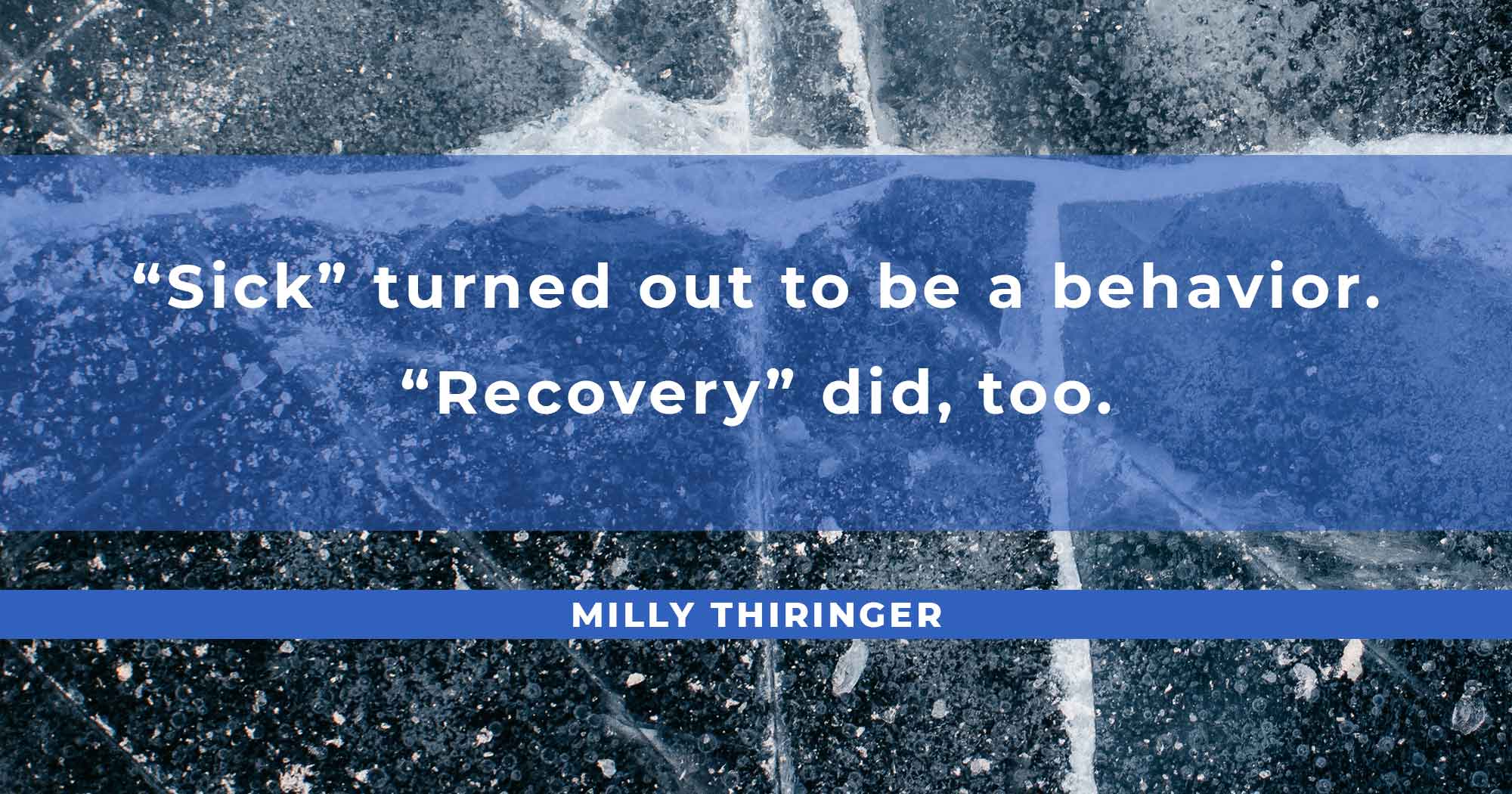 “You need to accept the fact that schizophrenia is a chronic condition. You will have it for the rest of your life, so you need to start focusing on managing your symptoms.” When I heard it put so plainly, I sighed in despair. I knew my case manager had finally told me the truth everyone else had been skirting around. Nobody wants to take away your hope, but they do want you to face the reality that no one gets better from chronic, debilitating mental health conditions.

I’d lived with schizophrenia for ten years by then, and experience told me that I would spend the rest of my life unsure whether my view of the world was real. My future would be riddled with psych wards, crisis centers, shrinks switching my medications around to find the one that helps the most, and forever being afraid of falling off my narrow ledge of half-health.

I wanted to give up.

I’d considered giving up, and even tried to, on numerous occasions before, but her words painted my prospects darker than they had been colored before. In contrast to her goal of getting me to focus on self-care and better functioning, I crashed. I couldn’t shower, eat, or sleep. I cut myself to distance my mind from the “reality” that I’d never know what was real.

I was working on my Master’s thesis one day when I was struck by a passage in Jean-Paul Sartre’s Being and Nothingness. He was describing a phenomenon he calls “bad faith,” wherein a person consciously or subconsciously lies to him or herself about their situation. I’d read the passage multiple times before, but this time I got this itchy feeling that this principle applied to me. I’d been pushing that itch to the back of my mind for some time, but this time it wouldn’t stay back there, but instead kept shoving its way into my thoughts like a cat that won’t get off your keyboard. Put the damn thing on the floor and it immediately jumps back up. 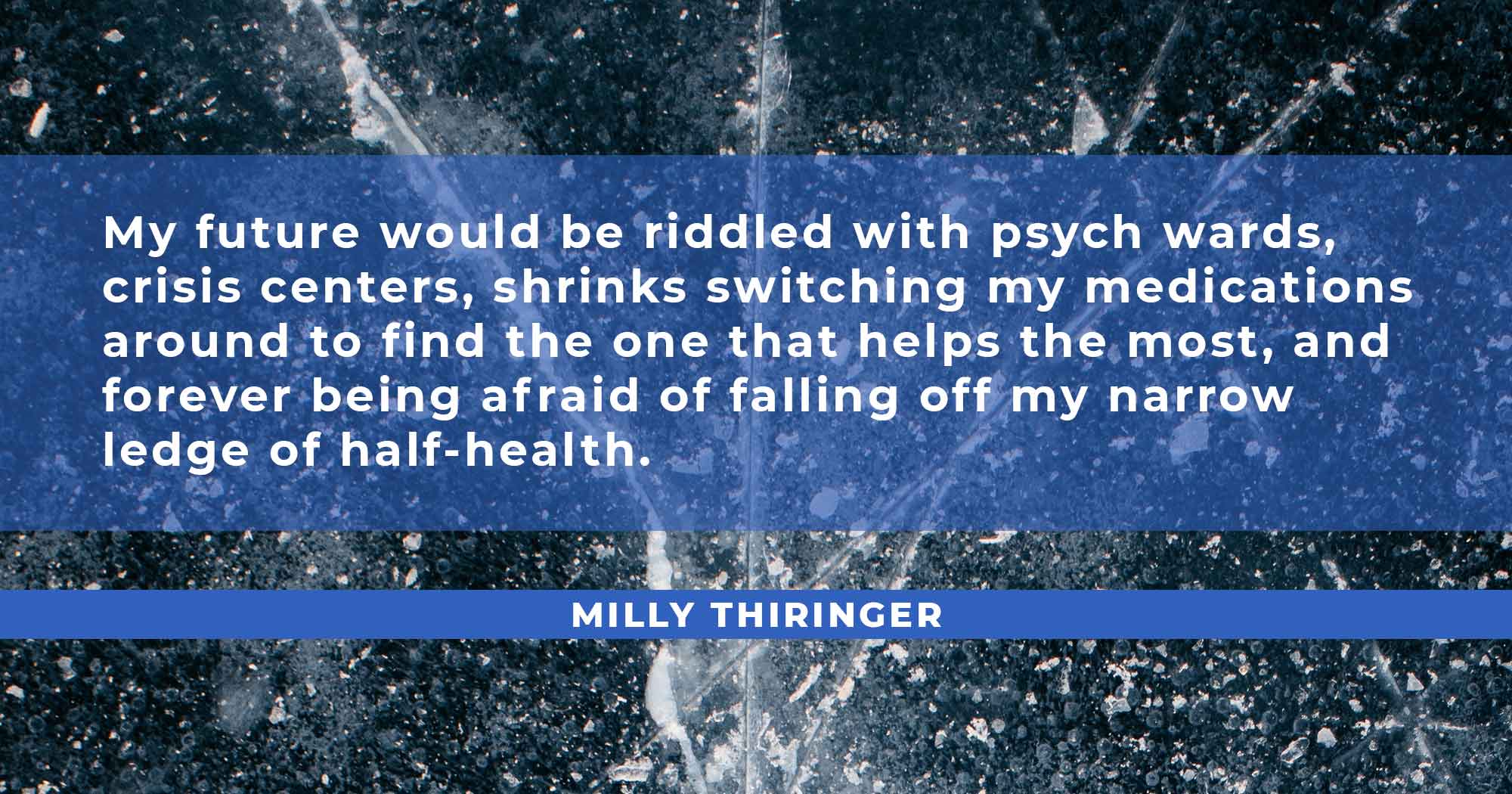 So I sat with that idea. I fed that it and checked in with it for a week to make sure it wasn’t clawing up the shower curtain or shitting on the bed. Turns out, it was true. I was lying to myself with respect to how much control I had over my reactions to my symptoms.

I was on the phone with a friend one night when he asked me a question that changed my life:

“What if you didn’t have to manage your symptoms at all? What if you could actually recover from mental illness?”

“That’s impossible,” I replied, automatically. Then I paused, and asked, “Right?”

The idea that I could heal without medication or micromanaging my environment was something I’d never heard. And it changed the way I looked at the world. As long as I am a schizophrenic I can’t recover, because my personhood is identified with my disease. But as soon as I change my perspective to, “I am a person who has schizophrenia,” mental illness becomes an attribute of my being, a characteristic but not an identity. This way of viewing my mental illness empowered me to make healthier choices with the conviction that those choices mattered.

I had a friend in high school who refused to keep only one penny in his pocket. Zero or two, but just one penny was lonely and wanted company. So it is with hope. A little hope tends either to disappear or multiply. My little hope went looking for a friend, and before I knew it, had gathered an army, clinking around inside my pocket. 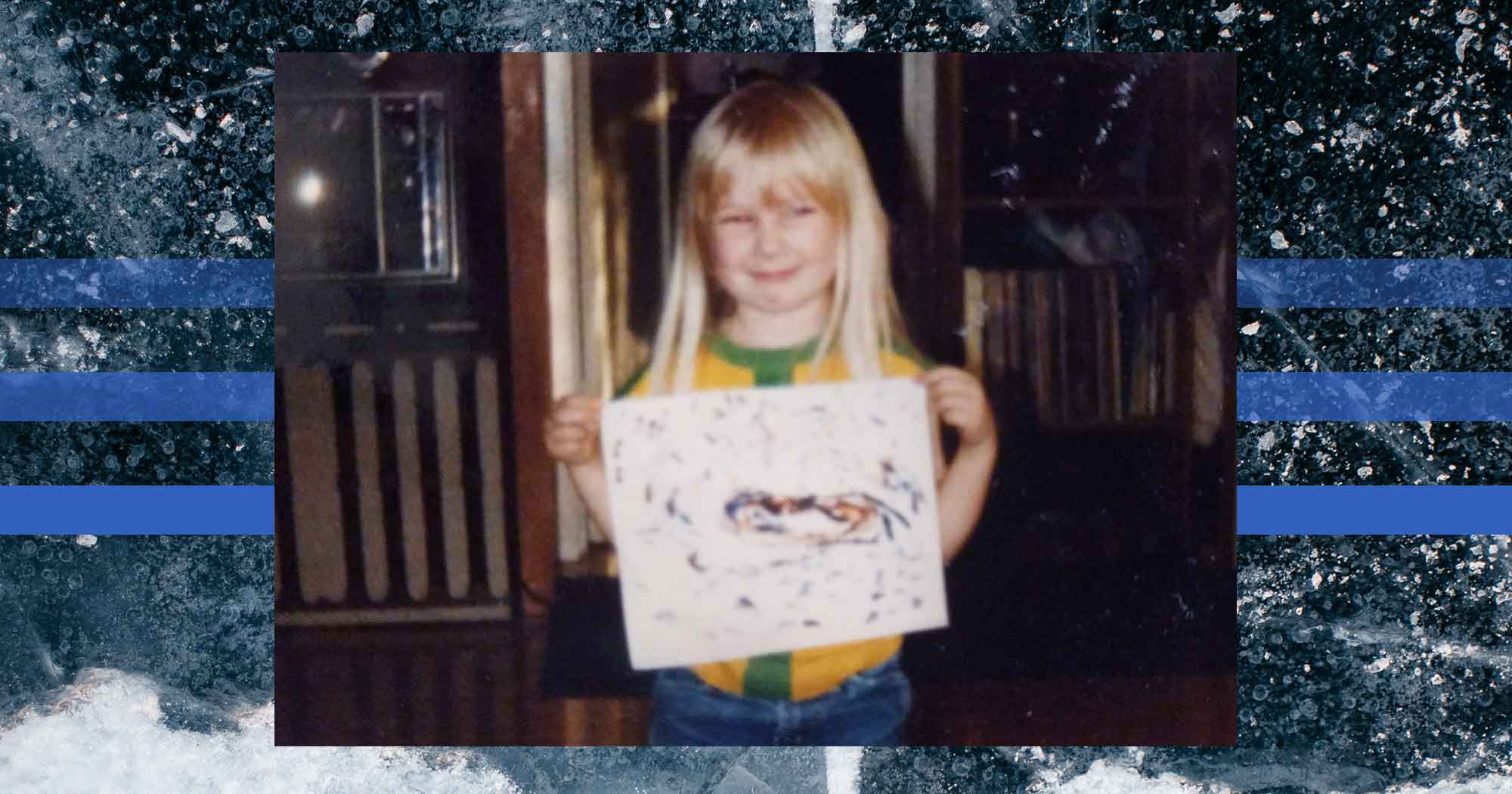 Milly as a child

Armed with a modicum of hope, I began changing my habits and working to control my thoughts, and hope built upon itself until it was laced with confidence, and then the confidence grew until it swallowed statistical “reality” whole.

I realized that the life I was leading wasn’t the life I wanted, and it wasn’t the life that God wanted me to have, either. I began to recognize a level of control over my behavior that I hadn’t acknowledged before. I devised ways to reality check my psychotic symptoms enough that I could tell what was real and what wasn’t, and I began to see that I had a choice in how I responded to my world.

I got up every single morning and I told myself, “I don’t want to be sick anymore. God doesn’t want me to be sick. And I will not behave as if there is no hope for change in my life.” Sometimes I had to tell myself that several times a day. I used “I won’t be sick,” to fight the battle against cutting and other dangerous choices. When I wanted to run away from it all, get drunk, or give up on my diet: “I won’t be sick.”

I knew I wanted a different life, and I was willing to sacrifice almost anything to get it. I kept my husband and my son in the front of my mind with every decision I made. Not every choice was the best one. I still made mistakes, but I made progress, too. 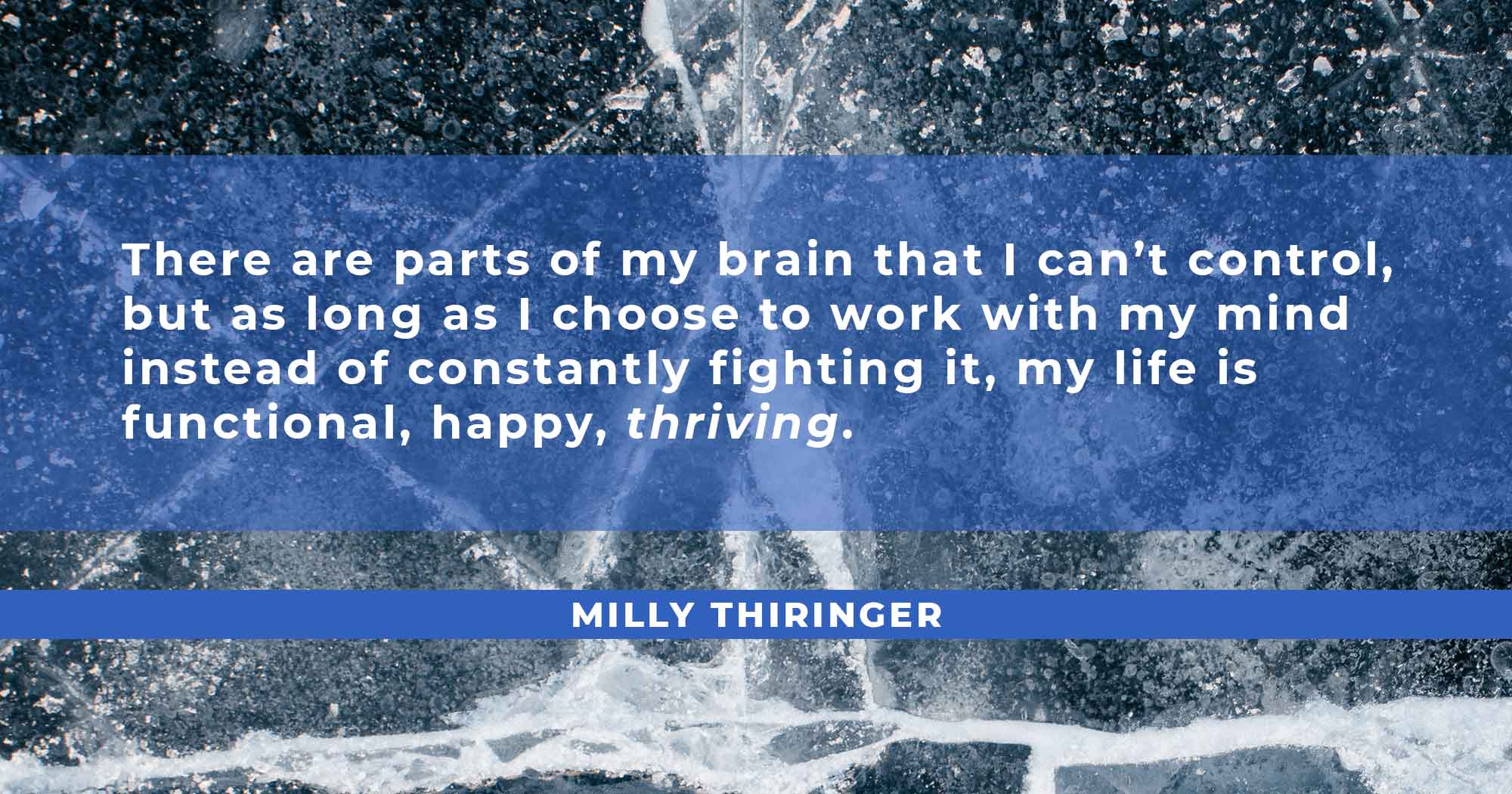 I took a long hiatus from antipsychotic medication. I have healthy relationships and I don’t do dangerous things on purpose. My life is different. I still hear voices and sometimes I have delusions. I’ve recently gone back on medication, because I began to lose my ability to tell what’s real and what isn’t. But those things aren’t who I am. There are parts of my brain that I can’t control, but as long as I choose to work with my mind instead of constantly fighting it, my life is functional, happy, thriving. The hope that I thought was gone was offered back to me, and I couldn’t resist grabbing hold of it with everything I had.

Turning hope into reality came down to the question of what I was willing to sacrifice in the present for a long-term gain. Life is composed of a series of juggling acts in which we weigh priorities against each other to make decisions. Once I was given the hope that things could change, I wanted that change no matter how much work I would have to do. I had been relying on medication to do a job I needed to do myself, and while it did lessen my symptoms, it couldn’t make my life healthy. I had to choose to be healthy. 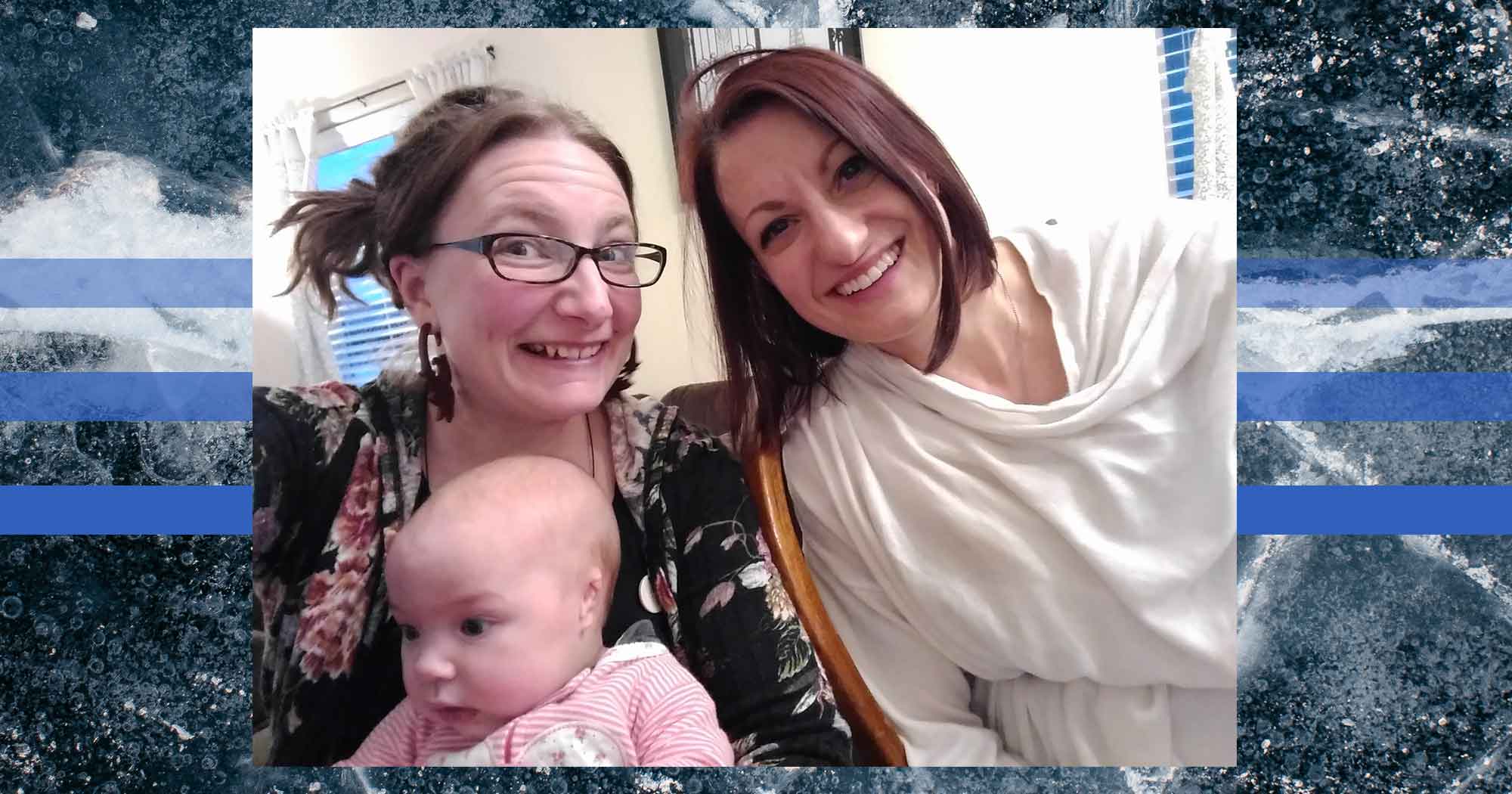 “Sick” turned out to be a behavior. “Recovery” did, too.

“You had about half as many errors as most first-time drivers.” The driving tester winked at me as he wrote “PASSED” in all caps across my score sheet. “It was a pleasure, Milly,” he said. “Go get yourself a driver’s license.”

Milly Thiringer is an acquisitions editor and logistics manager for FillesVertes Publishing in Coeur d'Alene, Idaho. She lives with her husband and three children, and writes to find out who she is, because the word “schizophrenic” can’t tell her that. Her memoir, Sit with Me While I’m Mad, is forthcoming from FVP in 2019. Find her writing and art at www.millythiringer.com.

After my bipolar diagnosis I got married, got divorced, lost my job due to the stigma of mental illness, and attend two assisted outpatient hospital programs.