Life Has Become Wonderful: My Life with Schizoaffective Disorder (part 1) 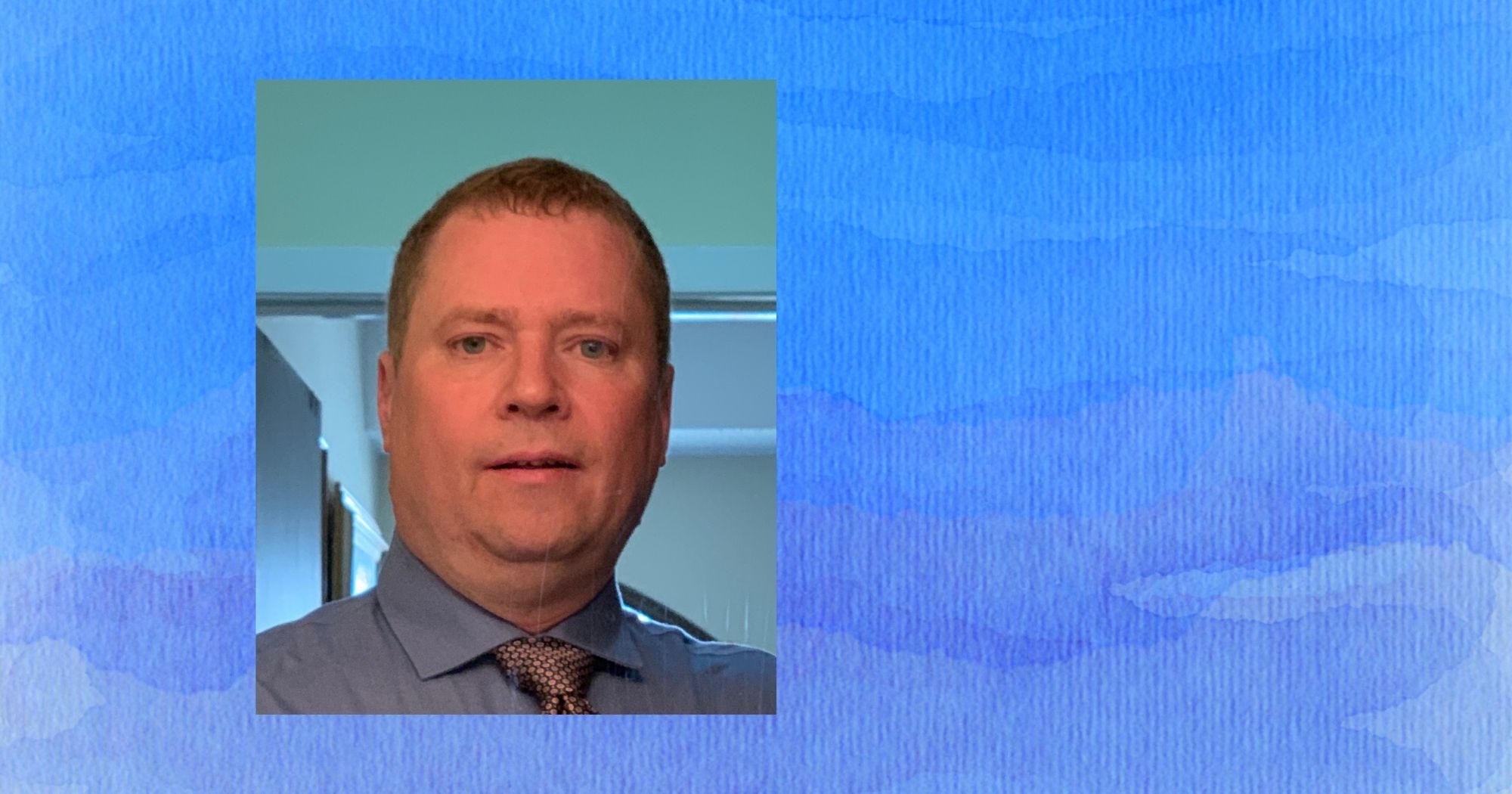 Life Has Become Wonderful: My Life with Schizoaffective Disorder (PART 2 OF 2)

​One of the key aspects of my recovery has been finding work that is not only suited for a person who lives with a mental illness, but also for that same job to give me a sense that I am doing some good, fighting for a noble cause. The early years after my diagnosis were difficult ones, but I was determined to be a contributing member of society. Even when I had almost nothing, I barely had enough money for food and a small, poorly furnished apartment, I would read extensively and try and write as much as I could. With time, that led to me writing and publishing a book about my mental health journey.

One of the agencies I work for is called The Schizophrenia Society of Alberta. They pay me to give talks to the public, to students and to groups like the Police Recruit Class. The idea is to battle against the ignorance and stigma surrounding mental illness. I believe the Police need sweeping changes, but in truth I also see the young trainees as wanting to help the mentally ill and to make a difference in these people’s lives. But more groups need to take up this cause, to educate and inform. Having components of classes that include being taught by those who have lived experience with mental illness should be in the curriculum of all of our schools. 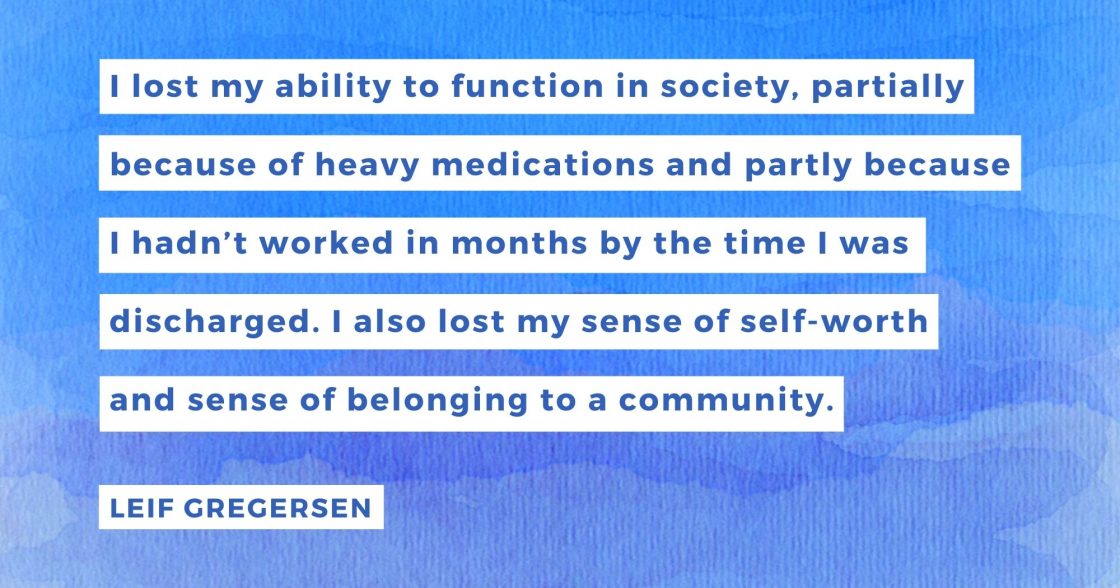 There are some glaring reasons mental health sufferers, families and other allies should reach out more with regards to how mental health patients are housed, and where they are getting treatment. The very location where people with mental health issues are sent to be treated needs to be changed. When I was still a teenager, I had only lived in one house, I had gone to school with the same people for thirteen years. I had a job, a car, a computer and stereo and a motorbike. When I had my first problems with mental illness at age eighteen and was taken to a place I had no idea even existed, I lost everything. The hospital was far away from my hometown on a deserted road and I could no longer attend school, associate with my friends, or find a job that paid more than the one dollar per hour rehabilitation jobs paid in the hospital. It took decades for me to return to working and self-sufficiency.

​Material possessions are one thing, but what I lost ran much deeper. I lost my ability to function in society, partially because of heavy medications and partly because I hadn’t worked in months by the time I was discharged. I also lost my sense of self-worth and sense of belonging to a community.

I honestly feel that if psychiatric hospitals were moved from hiding and placed in the middle of population centers, patients could integrate back into society much easier. Supportive private housing would take the strains off the system, more people could be treated and more of them would get better. The patients could attend school or work while they are being treated and they could engage in whatever pursuits once gave their life meaning. I personally believe that if there had been an early intervention in my situation and I was treated while still living at home, I would have been able to finish high school, keep my possessions, generate an income rather than live on disability benefits, and so many things would have gone easier for me. 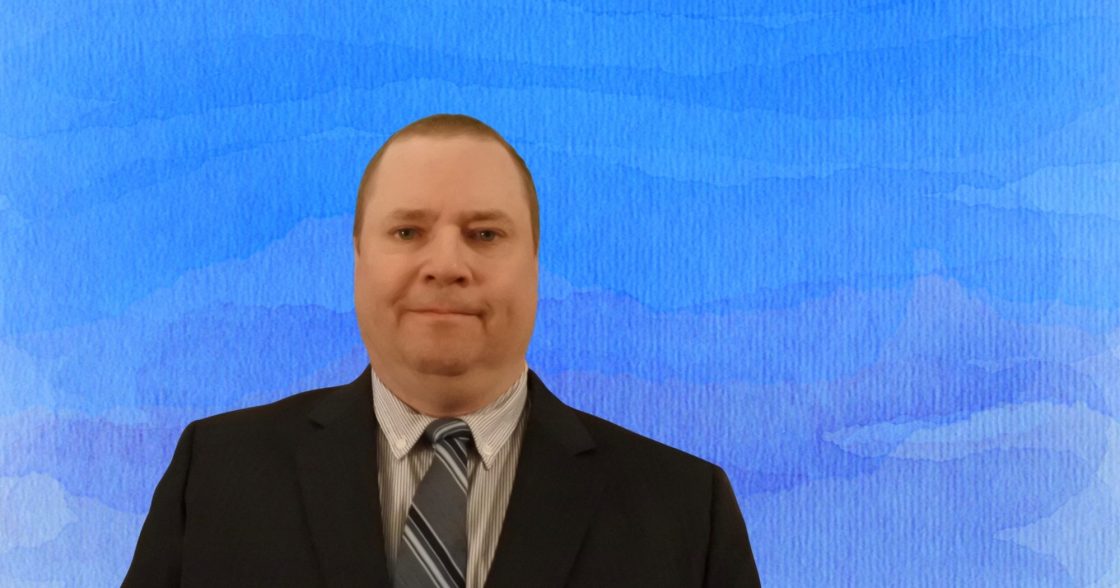 Leaving the hospital after being an inpatient for two months, I had no money, no car to get me to work, and no job prospects. When I was released, I went back to living with my parents. Soon after, desperate for any kind of job, and hoping the discipline would help heal me, I began the lengthy application process to join the military. Even while trying to do this, problems with my alcoholic abusive father hit the boiling point. Mental illness or not, army application or not, he wanted me out. This was hard to accept because in my whole life I had never lived anywhere but in that house.

One day after I slept in, my dad threw a fit, called the police who came and told me I had to leave. I had nowhere to turn. It all seemed so unfair, I felt like a cast-off piece of garbage. Just a few months before I had friends, self-esteem, a good job and a good chance at getting into University. Now I was out of sight and out of mind. The only thing left for me was to go to the homeless shelter and try to get assistance. I was given just enough for a few days’ worth of groceries and a tiny, filthy, bug infested room with the bathroom down the hall. It was horrible, but I found work and experienced some pleasure having my own space and time to read all I wanted. It was painful to think of all the people I knew going back to school and carrying on with their perfect lives while I worked back-breaking labor jobs for minimum wage and went home to a disgusting, run-down old hotel. 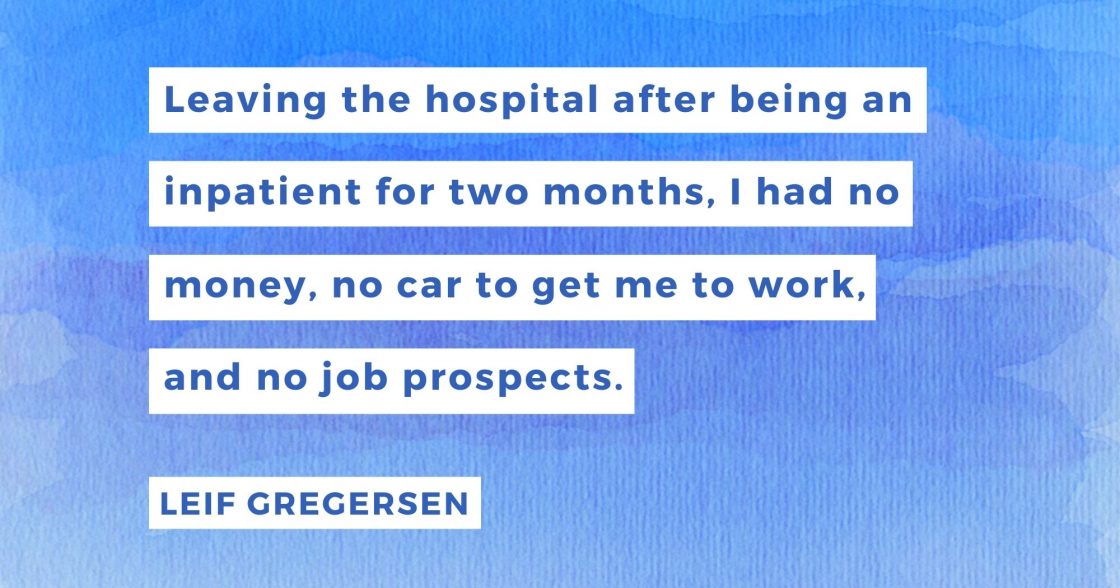 The next few years are almost a blank to me. I hitch-hiked to California, I rode the bus across Western Canada several times and rarely had a fixed address. I got a student loan and a credit card and wound up thousands of dollars in debt. When I returned home to Edmonton after becoming ill again, once more the shelter was the only place for me. Staying there, all I could see was the six inches in front of my face. I was able to eat and sleep and do little else, my medications were extremely debilitating.

What I learned from being homeless was to pay my rent before anything else. As long as I had a place to sleep things would be okay. But years passed and I seemed to fail at everything. Rarely did a year go by without a psychosis or severe depression which led to hospitalization. There were good times and bad times. I went back to school and met an amazing young woman I had a short relationship with, that was more amazing than anything I had ever experienced. But for a long time during those years I was a shut-in, just reading books, writing journals and trying in some way to better myself so I didn’t have to live that same way forever. 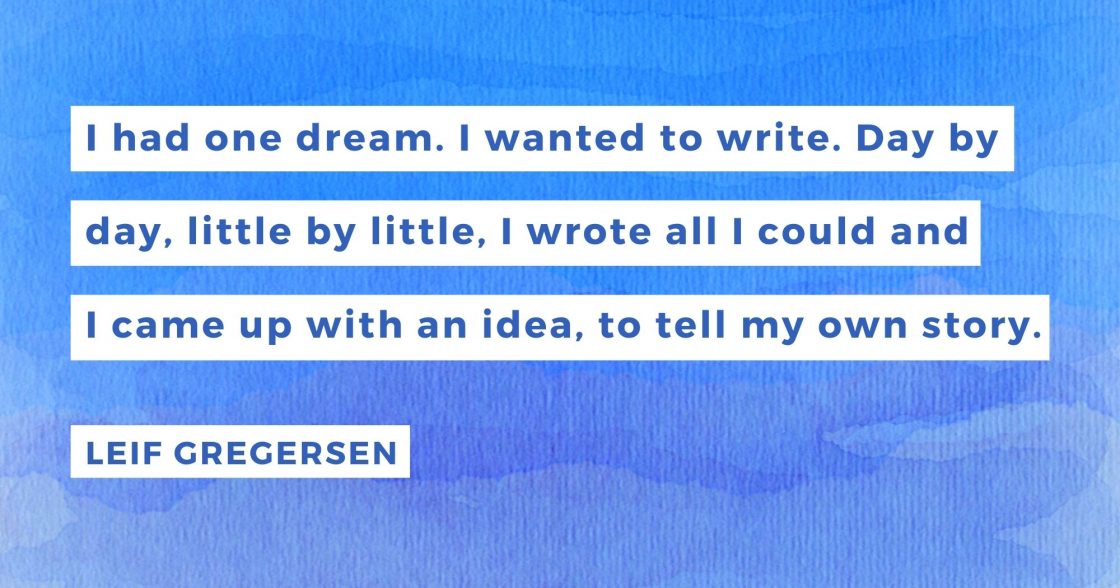 I had one dream. I wanted to write. Day by day, little by little, I wrote all I could and I came up with an idea, to tell my own story. Short chapters of different events in my life became my first book, “Through the Withering Storm.”

Over the years, I wrote three memoirs of my lived experience with mental illness. I laid everything bare, brought out all of the good and the bad. Before the COVID-19 pandemic, my books were doing well. I would bring them to my talks with the Schizophrenia Society and set up signings and interviews. In some of the nursing classes I spoke to I felt like a returning hero. So many people were impressed at how far I had come and wanted to buy my books. One time I spoke to a group of mall guards who had no interest in learning from us, they felt they were going to soon be cops and that they knew what they were doing. Little did they know I was once approached by a real cop who had heard me speak to his recruit class who told me that the information I gave him was invaluable and helped him a great deal. Years went by and I had almost no serious mental health problems. 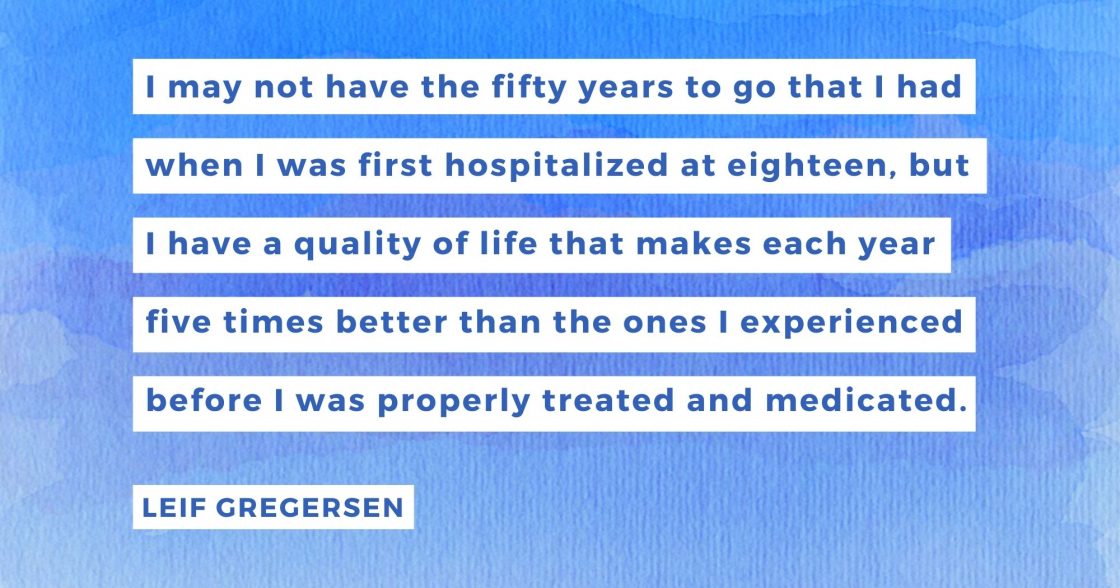 ​In that time, I became a completely new person. I have written and published a total of thirteen books. After moving out of the group home, I moved into a large, modern apartment and I continue to give talks, teach classes, and I have a short story collection a local publisher has shown interest in.

Above all, I have become a more caring and compassionate person. When I first was confined to a hospital, I am ashamed to say I had low regard for people with mental illnesses. In fact, I had never even known any or seen more than rare glimpses on TV of mentally ill people. What I wasn’t aware of was that there were members of my immediate family who had illnesses.

One of the key things that changed me was when I was hired by the Schizophrenia Society to reach out via phone to people with mental illnesses who isolated themselves. There were only about twenty people on the list and after working there a short time I had twenty new friends. I can’t talk about the people I spoke to, but I can say that I have a lot of fantastic memories. Each person gave me back so much more than what I gave them. Doing this work helped me to see people in need with compassion and to look for ways I can help them by talking to them, humanizing their problems, and being their friend. With all that I have been doing, I am no longer ashamed of my illness or my dire need to keep up my treatment and to not isolate myself.

I may not have the fifty years to go that I had when I was first hospitalized at eighteen, but I have a quality of life that makes each year five times better than the ones I experienced before I was properly treated and medicated. Life has become wonderful. At last I’m home. 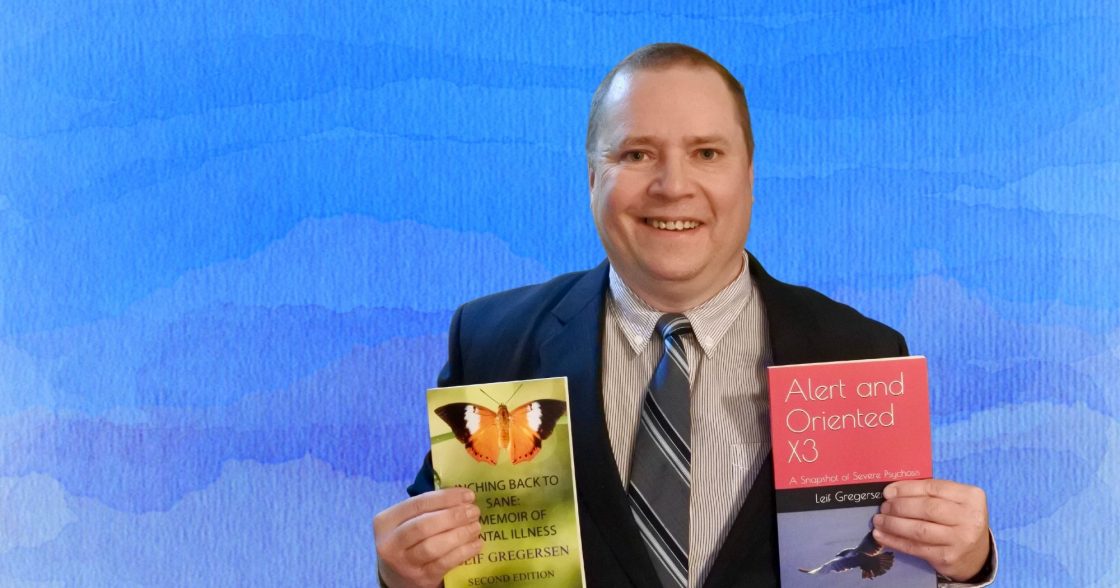 Leif Gregersen is the author of 12 books, 3 of which are memoirs of his lived experience with mental illness. He currently teaches creative writing at a psychiatric hospital and gives public presentations about mental health to various groups. His work can be found at Amazon.com.

This mental health recovery story focuses on Leif’s journey through hospitals, homelessness, and diagnosis. Leif learned to advocate for himself and now finds ways to do so for others. Read more in this two-part essay!