How I Learned I had Bipolar Disorder, or, “The Unpleasantness” 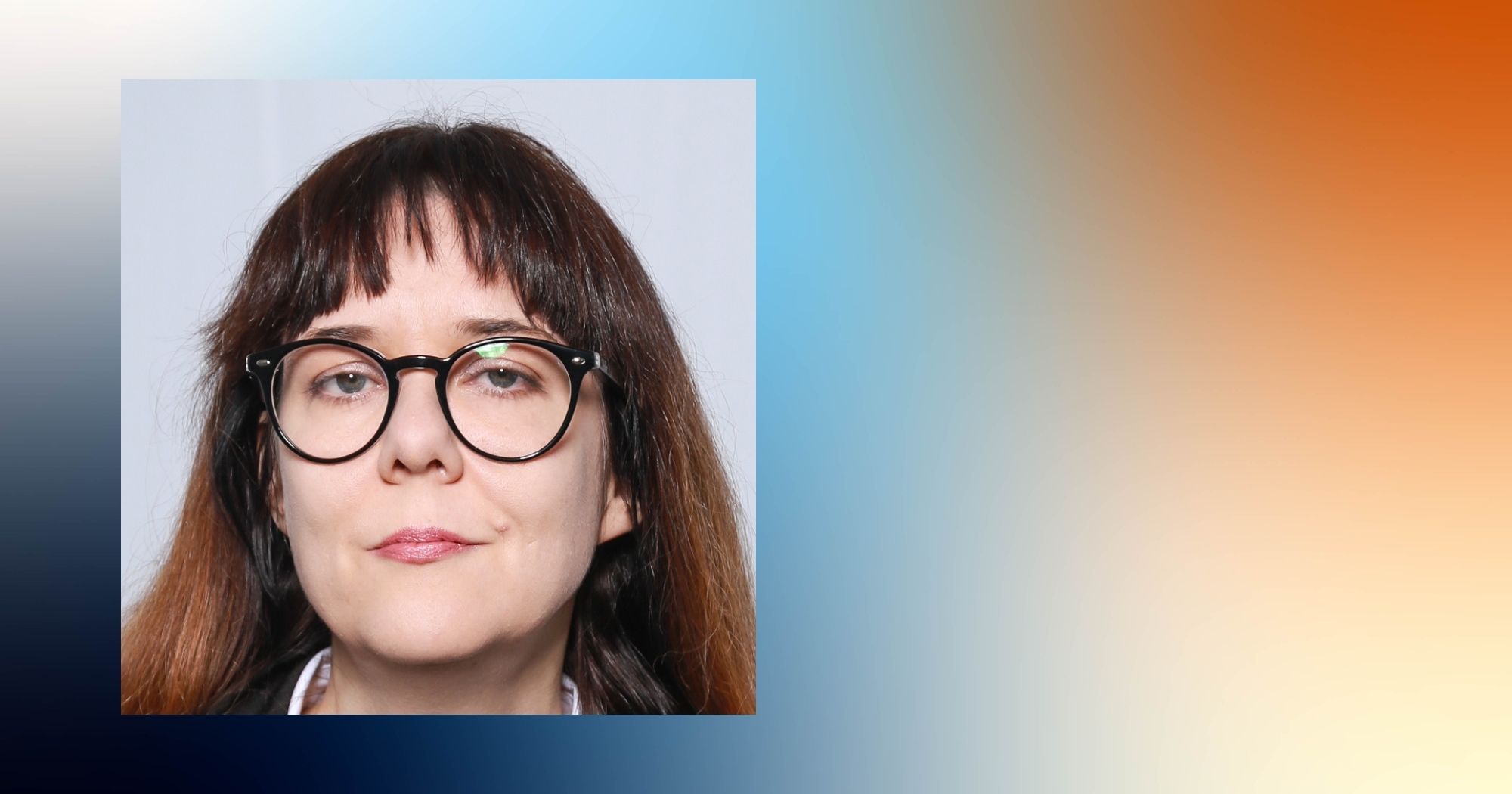 How I Learned I had Bipolar Disorder, or, “The Unpleasantness”

​It started with a cup of tea.

I had arrived early one morning at my new job, as was my custom, and had fixed myself a cup of tea, as also was my custom. Gazing out the large windows to the view of the city, I saw a perfect, sunny day. I couldn’t feel any kind of pleasure in any of it. I had a good job that was willing to take me on after I’d flamed out so spectacularly at my previous one, I had a lovely day ahead of me, and I had tea.

“I could be happy,” I thought to myself, “if I weren’t so unhappy.”

Almost two decades prior, I was diagnosed with depression by a general practitioner who gave me a prescription for antidepressants and sent me on my way. I went through a variety of medications that didn’t quite work, most of them prescribed by a psychiatrist whose modus operandi seemed to be “throw different drugs at the wall and see what sticks.” She was in see-and-respond mode; when one of my meds exhausted me, she prescribed an ADD-treating stimulant to perk me up again. When I was having trouble sleeping, she prescribed an atypical antipsychotic. When I finally let her go because my insurance changed, I gradually weaned my way off of everything until I stopped completely. The last antidepressant I had I gave up for Lent and never looked back. 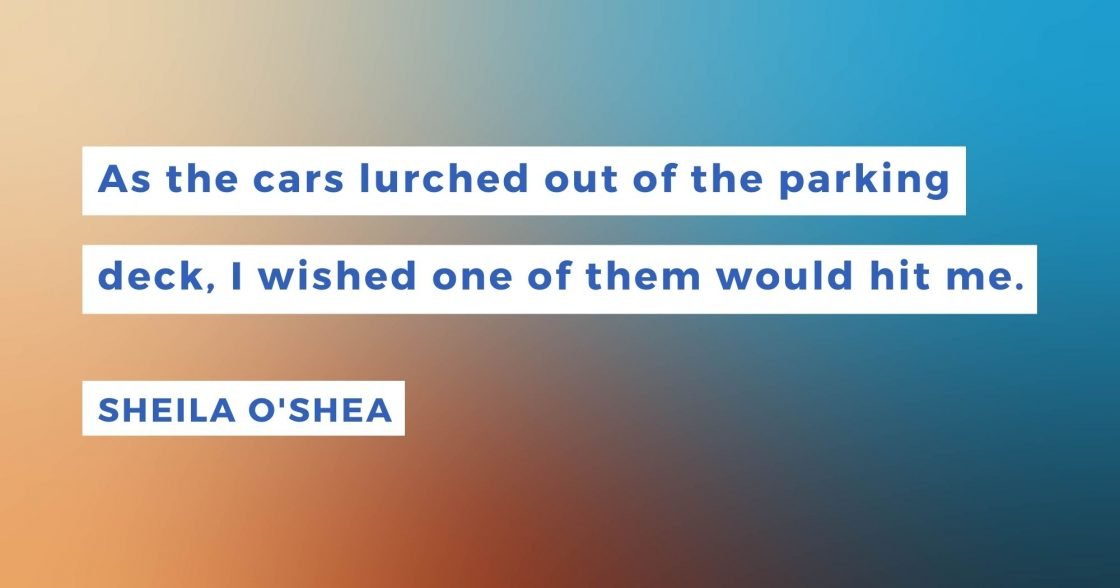 Now the depression had returned. I’d been staving it off with amino acid supplements, but that clearly wasn’t enough. I’d been dealing with it at my previous job, which affected my productivity to the point that they fired me. I thought perhaps working at a smaller firm wouldn’t stress me out as much, but, it seemed, that was not the case.

I called my doctor. Not a psychiatrist—I didn’t have one at the time—but someone who could prescribe medication for me. I picked a drug I’d taken that had worked for a relative of mine and she dutifully wrote me a prescription.

I did some internet searches on what I was taking to check its compatibility with other over-the-counter drugs I was taking. And I tumbled down a rabbit hole of Wikipedia pages to land on the one for bipolar disorder type 2.

​Up to that point, I’d had no idea that bipolar disorder came in gradations. I knew only the extremes that were said to come with it, and didn’t think the things I’d done amounted to it. I mean, there was the time I booked a flight to Japan the day after my boyfriend broke up with me, but that’s not really mania, is it? I knew I’d been depressed, but I wasn’t always depressed. Then again, intermittent depression did make sense if bipolar was the case.

The antidepressants only made me shaky and anxious. I stopped taking them.

One fine Monday morning, I came to work, sat down at my desk, and just couldn’t. I stared at the screen, trying to figure out which task to do first, and I couldn’t concentrate enough to pick one out. I felt incredibly tense in my body, and yet my mind was exhausted. 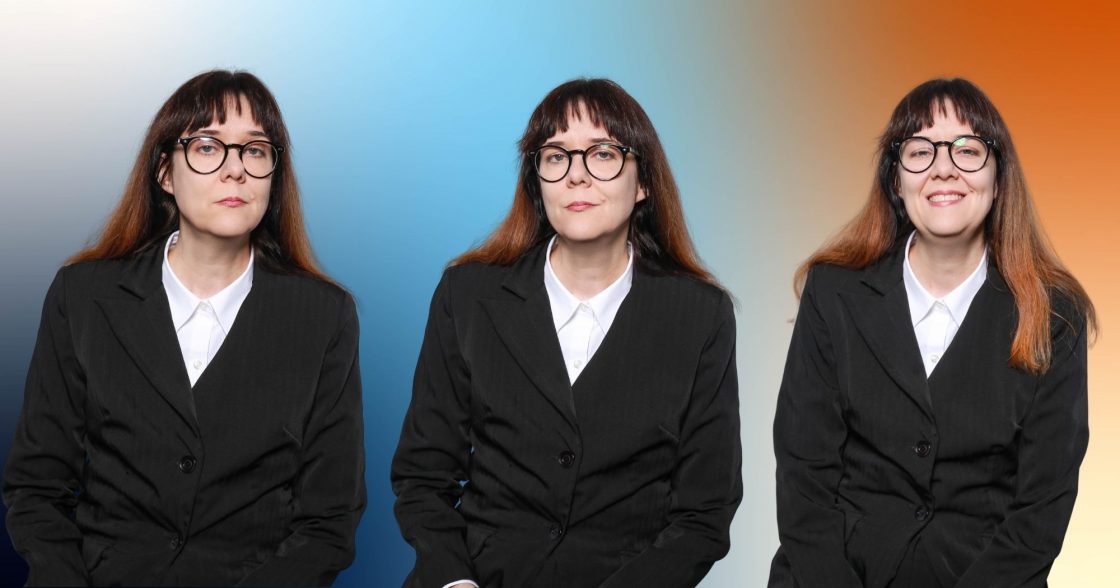 The boss was out of the country, so I talked to the administrative assistant. “I need to go home and have a lie down,” I told her. She suggested I go for a walk around the block. I did. As the cars lurched out of the parking deck, I wished one of them would hit me. I told the admin that I didn’t feel any better and she gave me leave to go home.

I went to my parents’ house, because it was closer and they weren’t using it because they were on vacation. I tried to rest, but my mind was racing too much.

Perhaps, I thought, I could take a bath to relax myself.

Perhaps, I thought, I could drown myself in it.

I went downstairs and called 911.

Calling 911 summoned a police officer and a social worker. I glanced nervously at the cop when I described some of the things I’d done over the weekend, and he assured me he was just there to make sure the social worker was safe. The social worker suggested I go to the emergency room for help. I was able to get a friend to drive me, and she kept me company until I had a room to go to. 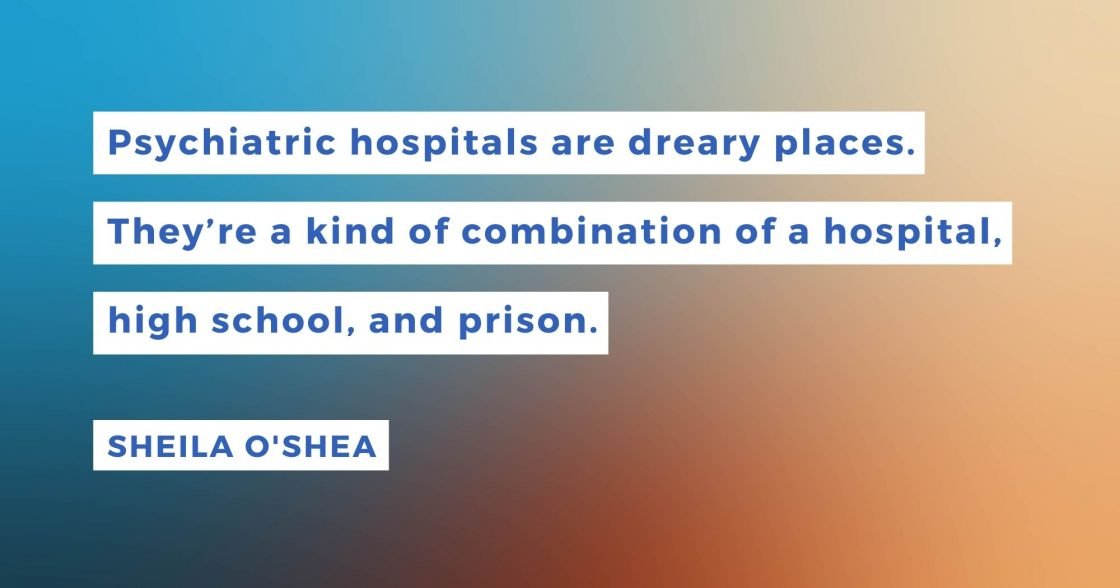 ​I waited for hours. They were not pleasant ones. Finally, they knocked me out with some heavy meds and threw me into an ambulance; I woke up at a psychiatric treatment hospital. My only possessions were in a bag I took with me to work, containing the usual things (wallet, keys, phone, etc.) and couple of unusual things (a composition book I’d been free writing in, and a copy of Open Letters, a collection of the writings of Vaclav Havel). They confiscated the phone, but let me keep the books. I called a friend to explain I probably wouldn’t make it for dinner that week, and she came down for visiting hours. We met in the cafeteria and I told her everything that had happened. It was good to have the comfort of a familiar face in that strange place. She brought me new clothes, toiletries and a comb, since I’d brought none of those with me. I still feel like I haven’t adequately paid her back for that. 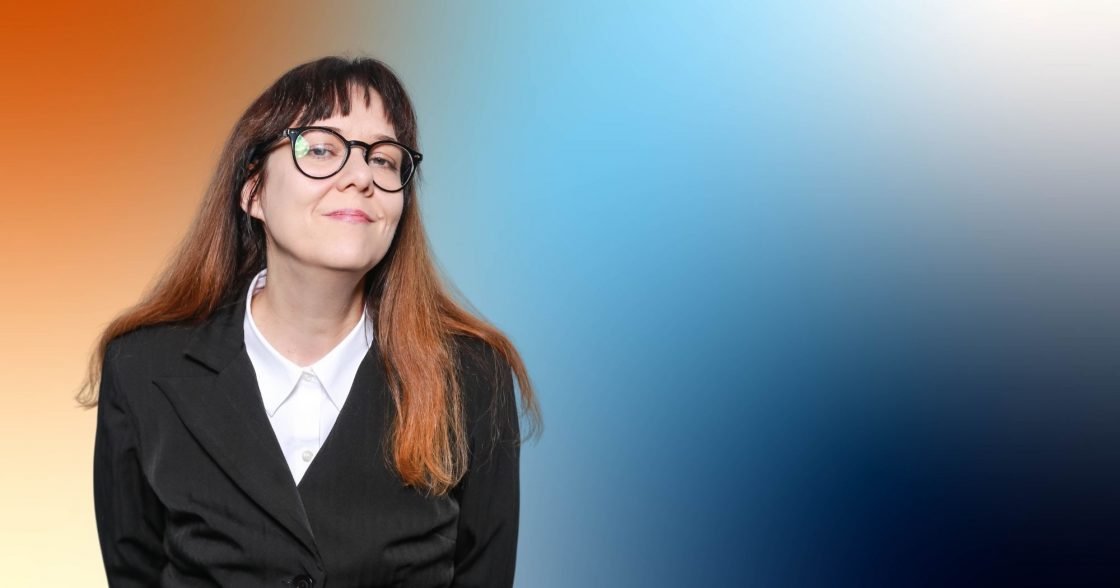 Psychiatric hospitals are dreary places. They’re a kind of combination of a hospital, high school, and prison. I told them that I might be bipolar, and they conceded it as a possibility, but also suggested other conditions. They tried different medications on me, and I emerged after a five day stay with a few prescriptions and an appointment with a psychiatrist. They never told me what my diagnosis was.

I canceled the appointment and stopped taking the meds. I wanted more and better options than what I’d been hastily saddled with after less than a week’s interaction.

My parents’ neighbor worked at a mental illness treatment center with a thorough diagnostic process. 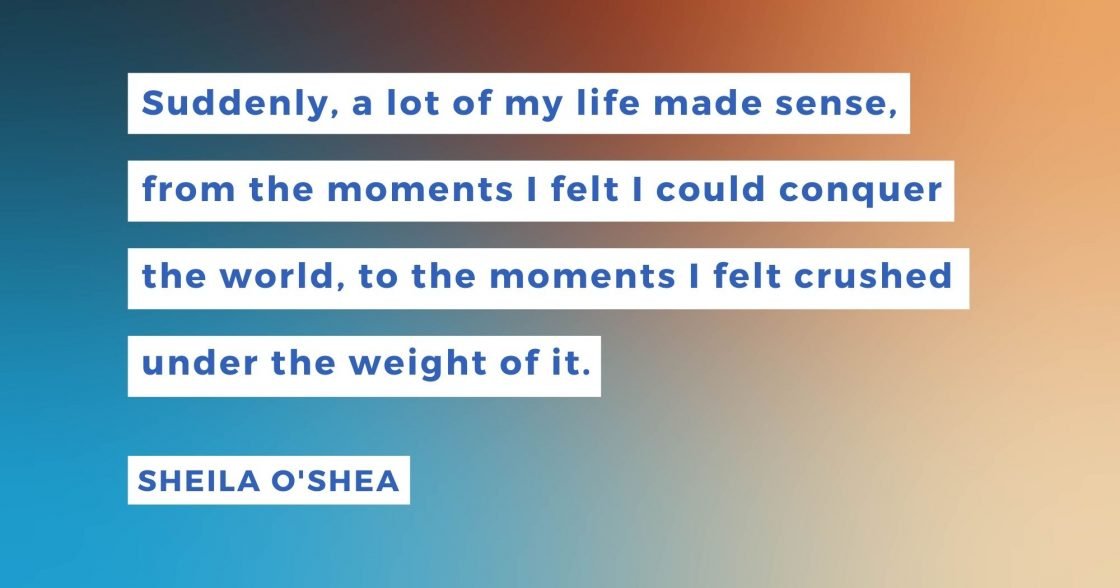 I took tests, interviewed with experts, even had blood drawn to make sure my symptoms didn’t have a physical cause outside of the brain. The final verdict was bipolar disorder type 2. (“I CALLED IT!” I shouted as I threw my hands up triumphantly.)

From there I did outpatient treatment at the same place for four months, learning about my illness and how to manage it. Suddenly, a lot of my life made sense, from the moments I felt I could conquer the world, to the moments I felt crushed under the weight of it. Now, when depression hit, I knew what to do besides take more pills, which is all I’d ever learned before then. I learned cognitive behavioral therapy, I learned mindfulness, I learned about myself and my (sometimes detrimental) coping mechanisms. 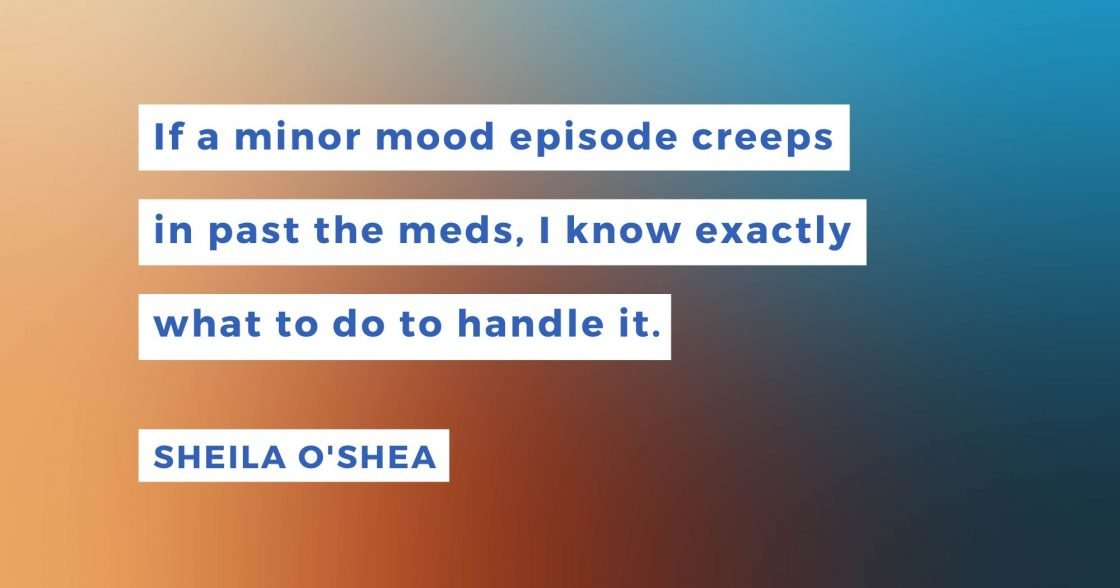 I’ve had my medications refined by several different psychiatrists, all of which I vetted for their bedside manner. I had drugs that didn’t work subtracted as often as new ones were added, and now I have a stable combination that keeps me steady. I’m in therapy with a counselor who specializes in CBT. If a minor mood episode creeps in past the meds, I know exactly what to do to handle it.

Bipolar disorder left my life—particularly my work life—a bit of a shambles. Now that I know what I’m up against, and have it under control, I’ve been able to strive for greater things and get them done. I’ve held down a steady job for more years than I’ve worked anywhere prior to that. I’ve started a freelance business and I’m starting to see income from it. A long-term art project I started while hypomanic is still going on and I’m determined to see it all the way through.

The time I spent thrashing about in suicidal ideation and spending in a psychiatric hospital I refer to this day as “The Unpleasantness.” People who know me well know exactly what I’m talking about when I say it. It was indeed unpleasant, but it also set my trajectory towards getting a clear picture of what my problems stemmed from. If I did it again, I’d do it the same, because of what I gained from it. If you have your own Unpleasantness, embrace it. You won’t be where you are now without it. 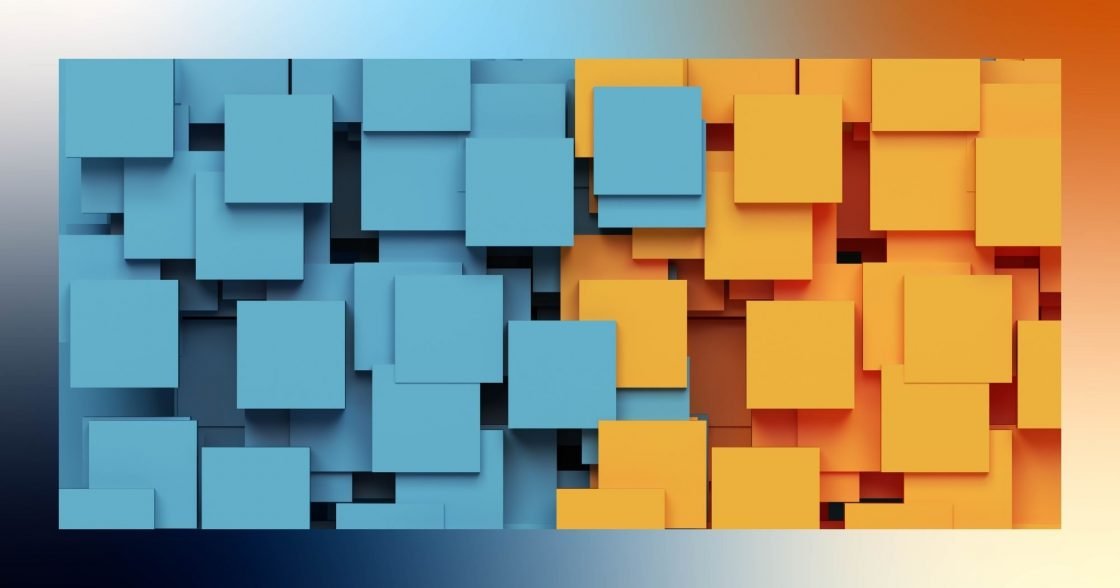 Sheila O’Shea is a writer who lives with bipolar disorder. She draws flowers to give away to people even though she can’t draw through her creation of her Ten Thousand Flowers Project. She also works as a freelance copywriter, with an emphasis on narrative marketing; information on that is available here.

Julia Tannenbaum’s adolescence was taken from her by a series of teenage traumas and mental health challenges; but she is only looking forward as she thrives in her twenties.