Hereditary Depression, Unplugged: My Uncle understood my mental illness because he shared it. Then he died. - OC87 Recovery Diaries 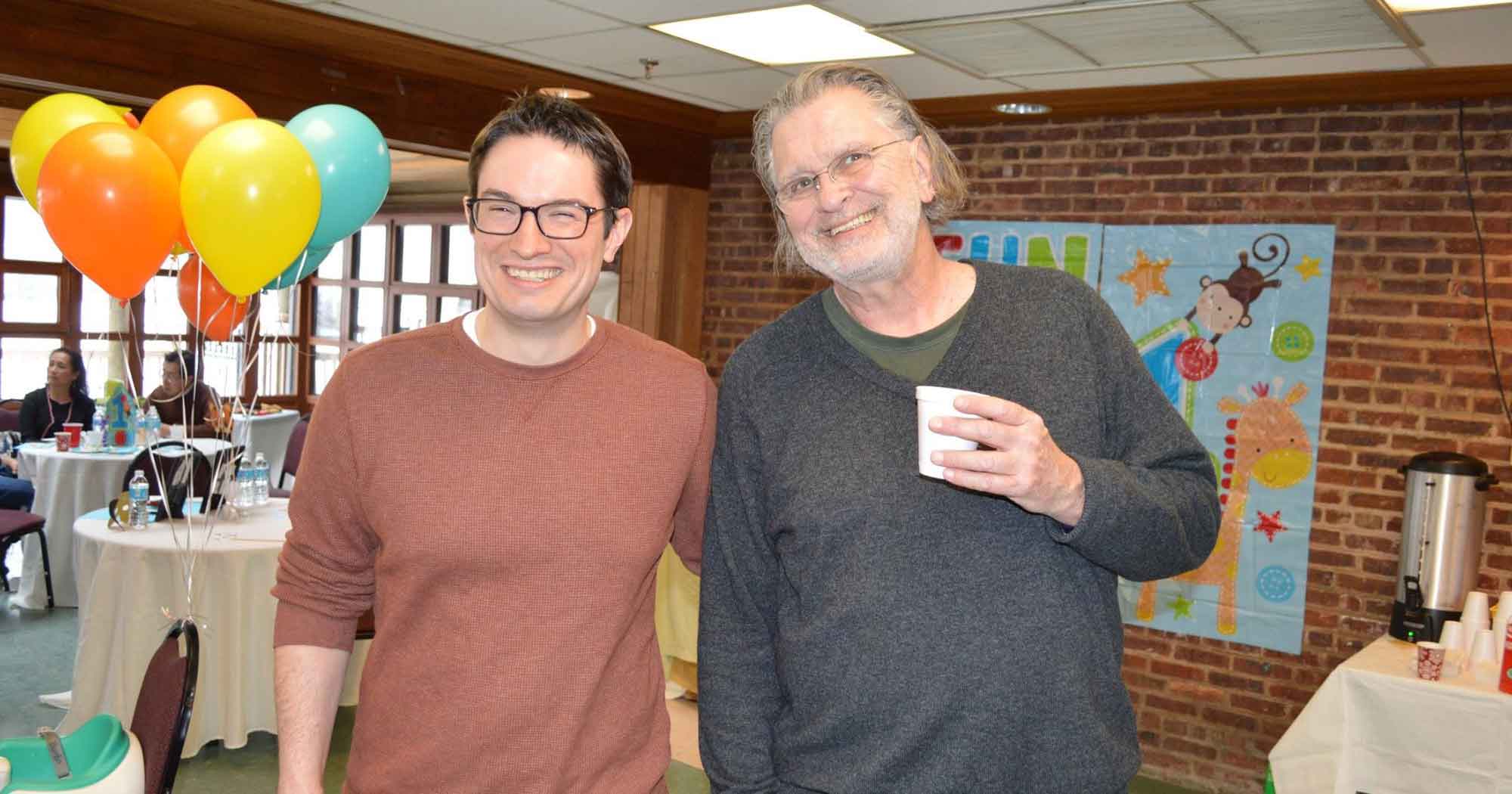 Hereditary Depression, Unplugged: My Uncle understood my mental illness because he shared it. Then he died.

I could always tell.

When Uncle Steve was depressed, his shoulders seemed stuck at slumped. There was an extra tick between the time he heard me and his response, like an astronaut speaking with mission control. His eyes were duller, fixed yet unfocused — a thousand-yard stare. His smiles went from frequent to forced, more grimace than grin.

I noticed these subtle external signs of Uncle Steve’s internal struggles immediately. I could always tell.

Because I could always implicitly relate.

Psychiatrists are increasingly convinced that depression can run in families. Considering this, relatives with depression can play a key role in both noticing depression in family members, and helping them cope.

Uncle Steve’s depression was, like mine, debilitatingly severe, even life-threatening. He was either going to get help, get “institutionalized,” or get dead.

As a young man, he’d been too scared to drive over the George Washington Bridge. Later, in his 60s, he would travel by plane to Italy. His was an essential evolution, because living life on one side of the Hudson — or in a fetal position on the floor — simply wasn’t doable. Instead, Uncle Steve went from not driving across rivers to soaring over oceans. 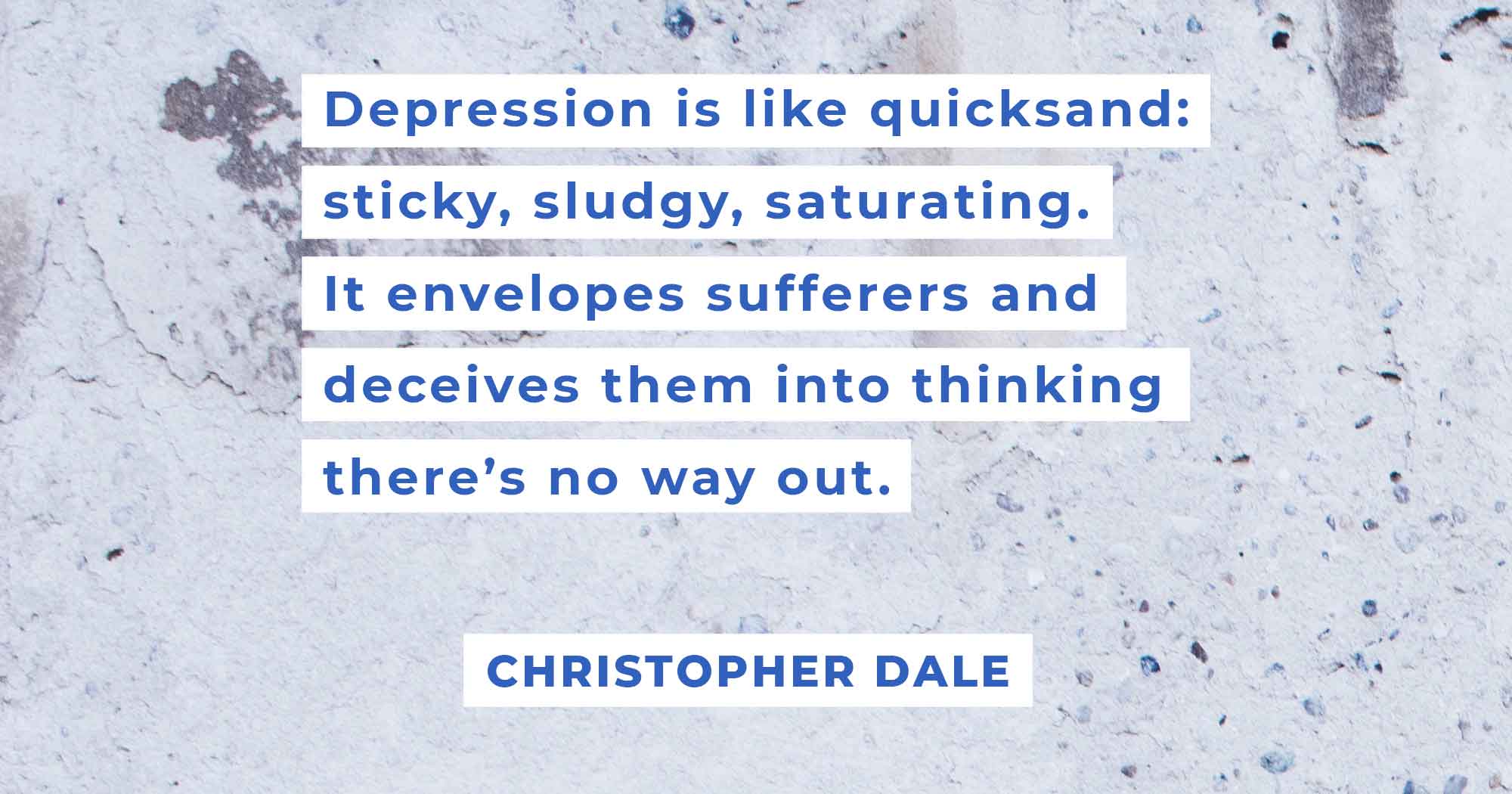 He fought depression’s darkness with the light of generosity. From his career in child welfare to harboring his alcoholic, maritally estranged nephew (me), Uncle Steve was always helping someone.

He also helped himself. Psychiatrists, relevant medication, exercise, and reams of educational and inspirational books were all weapons he wielded to keep his demons at bay.

It was Uncle Steve who taught me that sitting life out — especially now, with a wife, toddler, career and AA sponsees to mentor — isn’t a viable option.

It’s well known that trauma can trigger depression, especially in persons predisposed to the disorder. For me, that trauma came in my early 20s when, over an 18-month period, my eyesight began to deteriorate along with my optic nerve. A parade of doctors with increasingly multisyllabic titles couldn’t explain why despite MRIs, CAT scans, visual field exams and even a spinal tap. Suffice to say this counts as trauma.

There isn’t much you can say to a 20-something who thinks he’s going blind. Uncle Steve chose his words carefully.

“It’s probably bad. But maybe it’s not that bad.”

That may not seem like the pep talk a mortified young adult needs at such a terrifying time. But Uncle Steve’s background in depression — and background in, well, me — led to what he figured was, at that moment, the most optimistic assessment I could find palatable. Partly-cloudy (with low visibility) was the best-possible forecast. 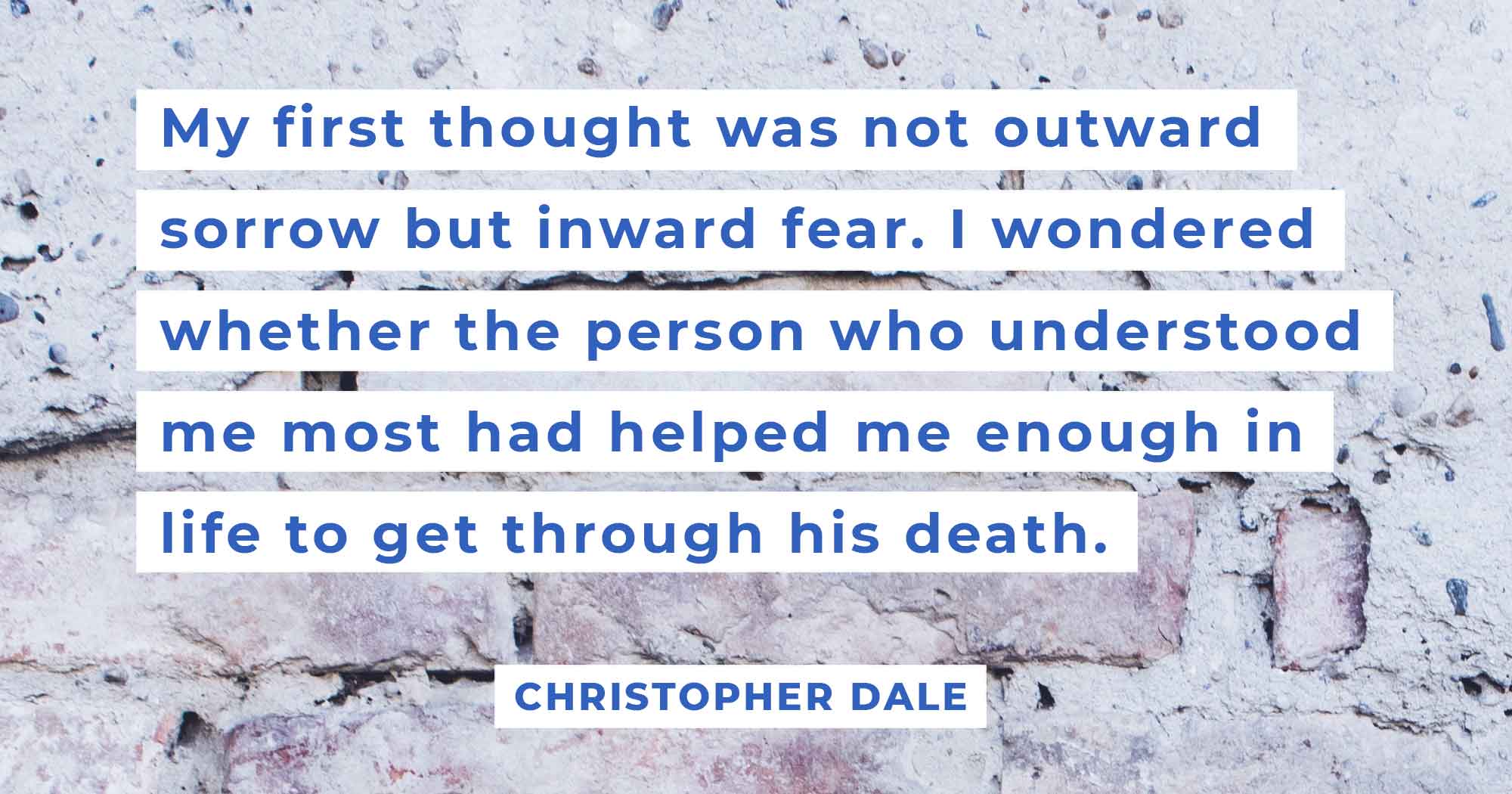 Simultaneously, Uncle Steve was validating my dread — a sanity-verifying island amidst a sea of “it’ll all be OK” bullshit — while advising me to fight the inclination to assume the worst, a tendency he knew full well.

It was half sounding board, half security blanket. I needed someone not to solve my problems, but keep them from damaging me irrevocably. Uncle Steve knew I’d rather be dead than blind; he was trying to prevent the former despite possessing zero control over the latter.

Uncle Steve was the thin thread tying me to reality during that protracted, panic-stricken period. Then, as suddenly as it had begun worsening, my eyesight leveled off. It’s been relatively stable — about 20/60 corrected — for 15 years now.

For lack of conclusive tests, my diagnosis-by-elimination was Dominant Optic Atrophy. The ominously-acronymed DOA has wide-ranging prognoses, from virtually unaffected to nearly blind. 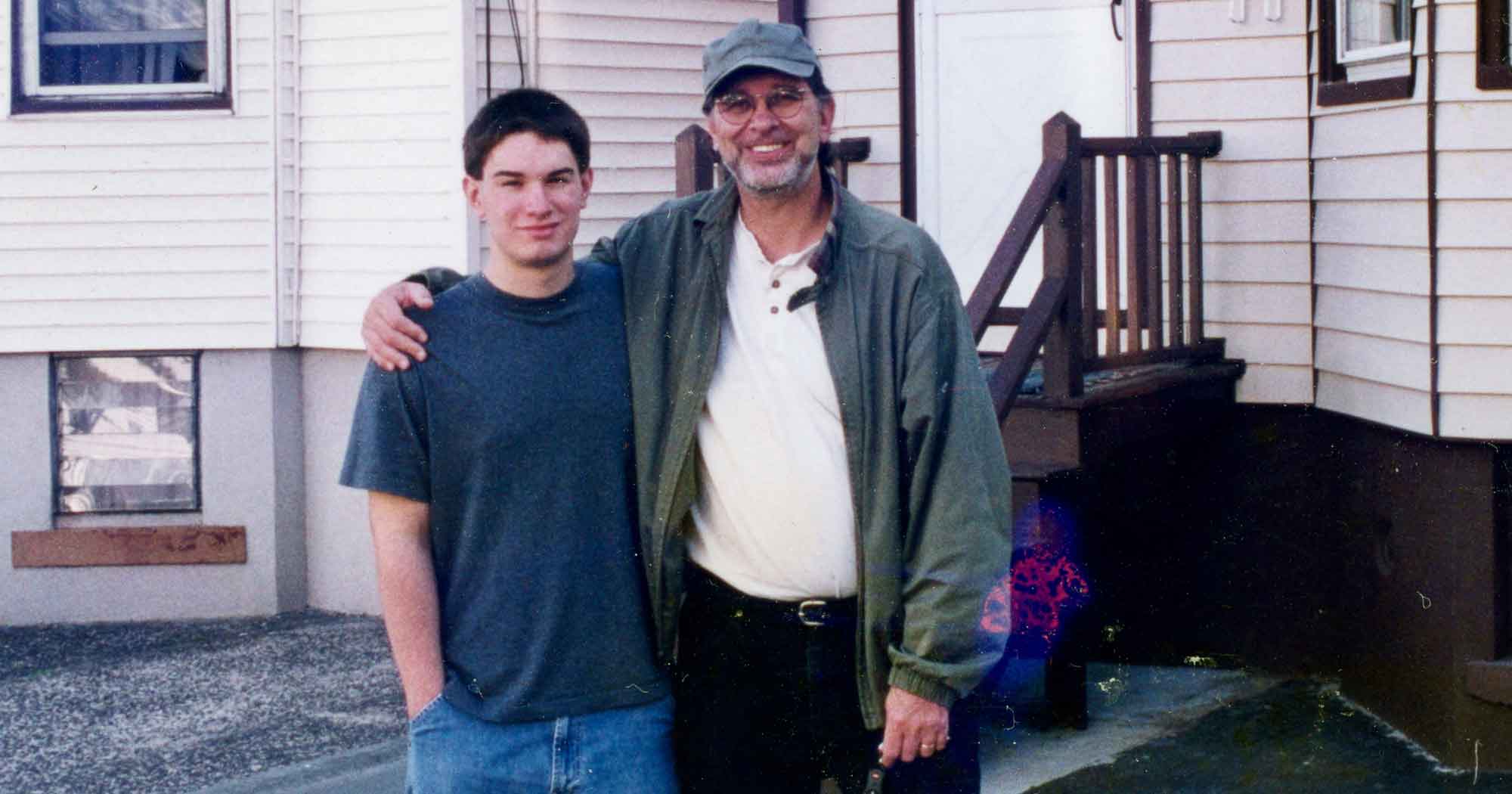 My impairment, like most, falls in between. It is alarming, alienating, and noticeable on a near-constant basis. From reading and watching TV at home to PowerPoint presentations and even eye contact at work, it affects everything, and is entirely inescapable.

My psyche was smashed. I descended into an anxiety-riddled depression that, slowly but steadily, left a journalism school honors grad incapable of completing a coherent sentence.

In late 2006 the slide steepened, culminating in insomnia so total that I didn’t sleep for a full week — a timeframe that included my aforementioned near-suicide.

“People don’t think about us as much as we think they do. They’re too busy thinking about themselves.”

Uncle Steve had seen the familiar, troubling signs emerge in me. The persistent pessimism, the unbudgeable unhappiness. And of late, the paranoia. I was convinced everyone hated me, that I was irredeemable, despicable.

In my deep depression, Uncle Steve knew I wouldn’t listen to brightsidism, or even glass-half-full rationalizing. So he pitted my cynicism against my depression: “People are selfish assholes,” he continued, “so don’t kill yourself over them.”

My head jerked up. He knew I was suicidal. He knew my mind could be a dangerous cage because his could be too. I wasn’t alone — and because of that, I wasn’t revisiting the apartment building’s roof anytime soon. My belief that “nobody understands” no longer worked as an excuse. 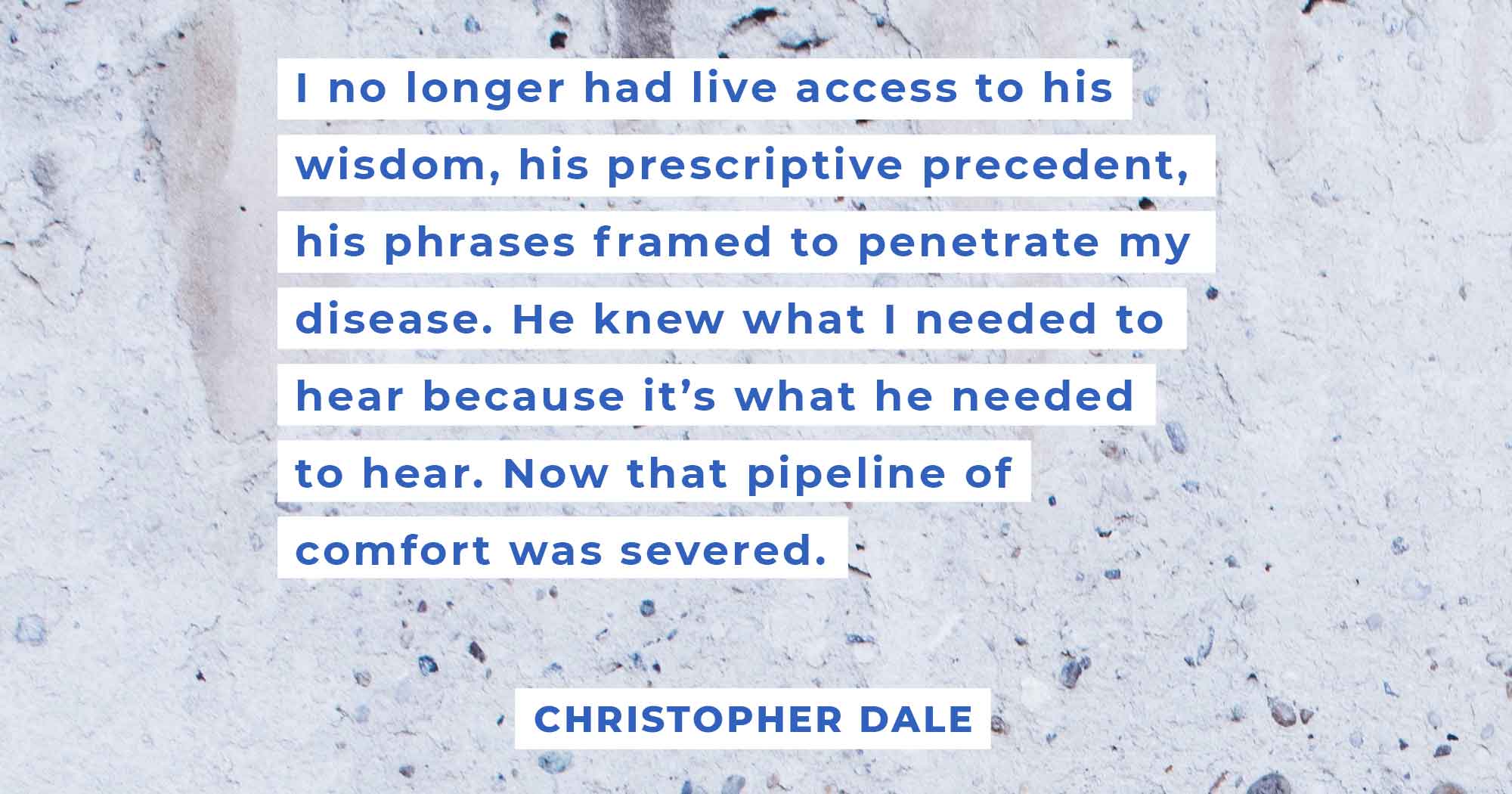 I should have gotten real help then. Instead I started treating my nerves the old-fashioned way: booze. I quickly became a low-bottom alcoholic, a run mercifully ended in 2011 with police sirens and a suspended driver’s license.

Alcoholism and depression are about as intertwined as diseases get. And while Alcoholics Anonymous steered my recovery from the former, the person most instrumental in overcoming depression was Uncle Steve.

Uncle Steve could not get an alcoholic sober — that fell on me. But when my drinking career ended, I was left with the same depression and anxiety that had driven me to anesthetize myself with alcohol. As always, his words carried weight as he matched milestones with motivation.

“You used to be angriest person I knew, and now…well… you’re probably third,” he joked. “I’m proud of you. Keep going.” 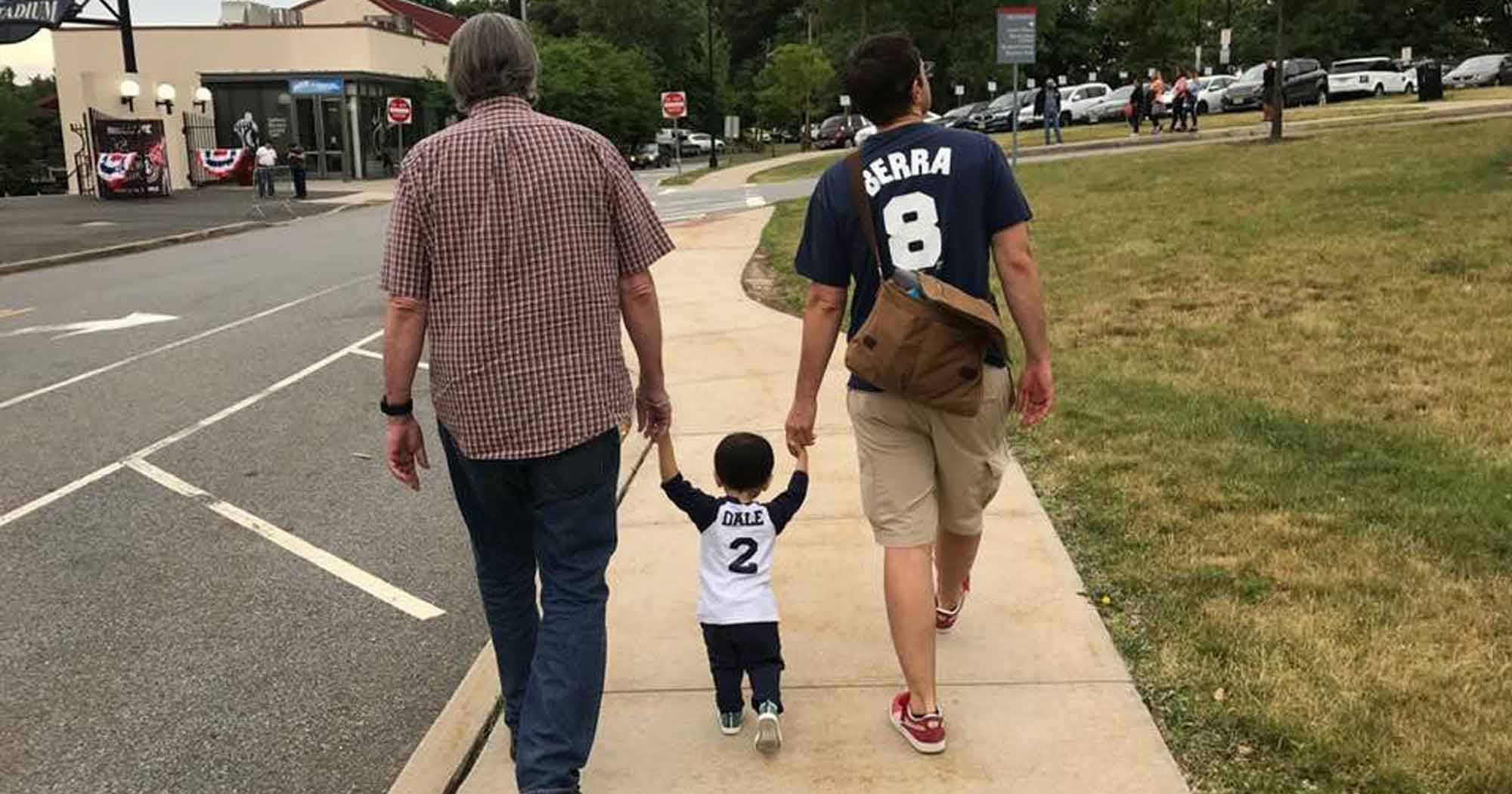 In the ensuing years, he would be my chief consoler when my wife miscarried (“Allow yourself to be in pain. This is appropriate sadness, not depression.”); my balance beam upon suffering a small stroke shortly before finally becoming a father (“Leave your fears with the doctors for now. When the baby comes, your Aunt and I are here — lean on us.”); and my primary point of reference when fatherhood began to sink in (“you’re going to worry about him for the rest of your life, so just accept that without being overwhelmed by it.”).

Then the voice that best penetrated my depressive nature fell suddenly silent, forever.

What followed was, I imagine, as close as an only child gets to experiencing the death of a twin. Uncle Steve was my depression doppelganger. His passing left me not only deeply sad, but also severed from a seemingly indispensable source of identification.

Depression is like quicksand: sticky, sludgy, saturating. It envelopes sufferers and deceives them into thinking there’s no way out. It isn’t so much a cringing horror as a clinging hopelessness. In this, Uncle Steve was my partner in grime; ours was a symbiotic relationship that kept either from sinking too deep.

His death left me to face depression alone, or at least more alone. Sure, there are other resources — my psychiatrist, my AA sponsor, support groups — but no tool will ever be so precise, so customized, as Uncle Steve. He was so intimately familiar with my past and present, fears and secrets, tendencies and trepidations. He is, simply, irreplaceable.

Via smartphones, we lived our lives instantly accessible in each others’ pockets. Since his passing, my pocket feels as light as my heart is heavy. His loss is the loudest silence I’ve ever heard.

The first depression-rousing test of life post-Uncle Steve was, and remains, mourning Uncle Steve himself. I was aware of this macabre coincidence immediately upon his passing, as if my brain slammed the door on a flood of grief before it could reach my soul — a dam of self-preservation attempting to prevent a dangerous inundation of depression. In the months since, the result has been a series of absorbable gut punches instead of one thundering knockout blow.

My first overt reaction to Uncle Steve’s death was shamefully selfish.

I no longer had live access to his wisdom, his prescriptive precedent, his phrases framed to penetrate my disease. He knew what I needed to hear because it’s what he needed to hear. Now that pipeline of comfort was severed. 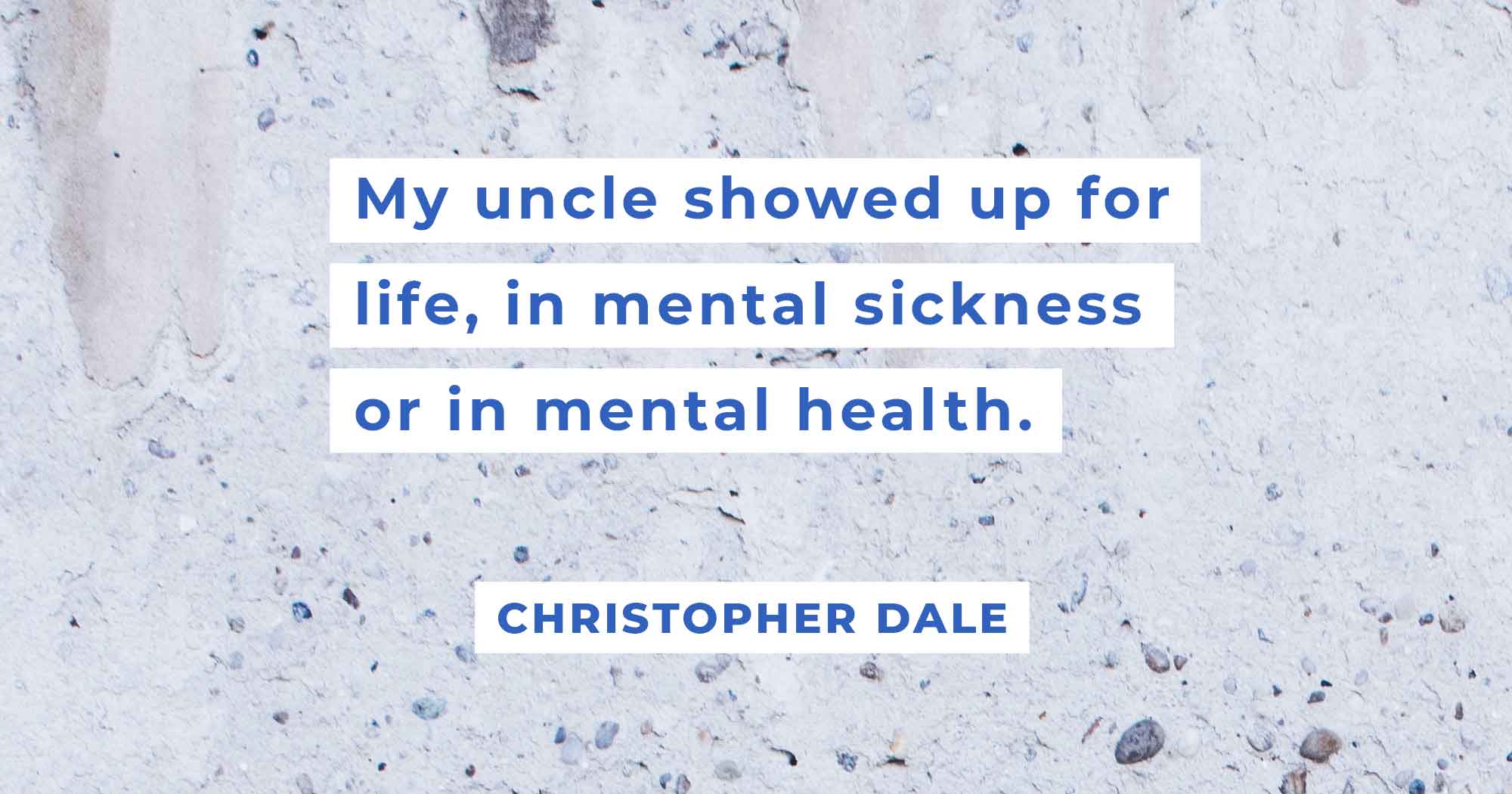 Days later, this self-serving sentiment echoed in my eulogy:

“When I heard the news about Uncle Steve, my first thought was not outward sorrow but inward fear. I wondered whether the person who understood me most had helped me enough in life to get through his death.”

Thus far, the answer has been a resounding yes. I miss him dearly, sometimes desperately, but have discovered an unrealized resilience only truly discovered in the wake of tragedy. My uncle gave me adult coping skills — pausing before reacting; limiting expectations; recognizing that everyone is, in some way, in pain — sufficient to weather the saddest event of my life: his passing.

And when these tools fail, one remains: emulation. Uncle Steve fought his depression tooth and nail. Sometimes that just meant moving forward, depression be damned.

He taught me to always keep moving forward, even if only a snail’s pace is possible. I’ve seen Uncle Steve put his feelings on the shelf — even the sort of hopeless, irrational gloom depression sows — and trudge forward, letting his head follow his feet and his heart follow his head. My uncle showed up for life, in mental sickness or in mental health.

Uncle Steve has passed this disciplined, do-your-best-approach to me, and I am forever grateful. A large part of his legacy is my well-being. In his spirit of service, here’s hoping a fellow depression sufferer identifies with this piece and finds some solace.

Christopher Dale is the author of the forthcoming book, Better Halves, which explores marriage in drug addiction and recovery. He has written for a variety of outlets, including mental health and addiction outlets, major newspapers like the NY Daily News and NY Post, and special interest outlets such as Parents.com and Dogster.

Receiving a diagnosis for borderline personality disorder later in life was difficult for Lisa Parker. When she finally heard the phrase "bpd," she was able to start learning skills in her 50s she wished she'd learned in her 20s.