Finding Stability: A Path Towards a Better Life with Schizophrenia by Mike Hedrick 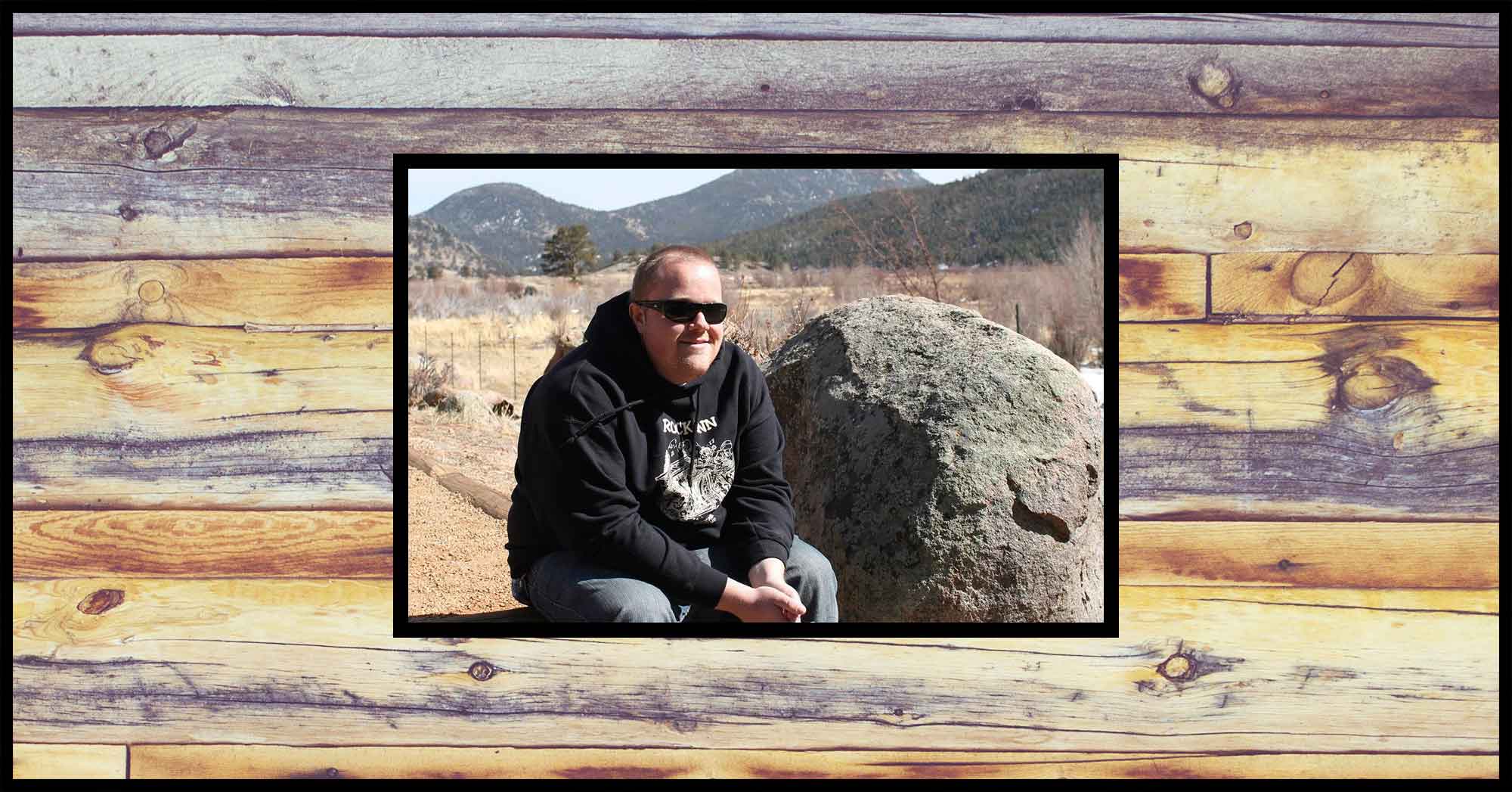 Finding stability, like anything else worthwhile, takes time and effort. It also takes an openness to learning, and and an openness to failing. Finding stability a process of nearly unparalleled complication as you work, practice, and commit to wellness and discovery. Achieving stability has been the overarching goal in my life up to this point and to say that I’m perfectly healthy and stable would still not be the truth. Living with schizophrenia brings the instability you feel as part of the illness. This includes not only the psychosis, delusions, paranoia, and other symptoms, but the overarching experience of living life with mental illness.

Maybe schizophrenia causes you to be unable to interact with people due to debilitating anxiety. Maybe it causes you to lose your concept of self and everything that you had going for you: school, work, family, friends; all of these can deteriorate slowly, or quickly, depending upon the severity of your illness. You don’t know how to keep afloat in the world because, compared to the things that are going on in your head, reality is so seemingly inconsequential.

You have a special mission!

The government is reading your mind!

You’re a prophet and you’re communicating with aliens! 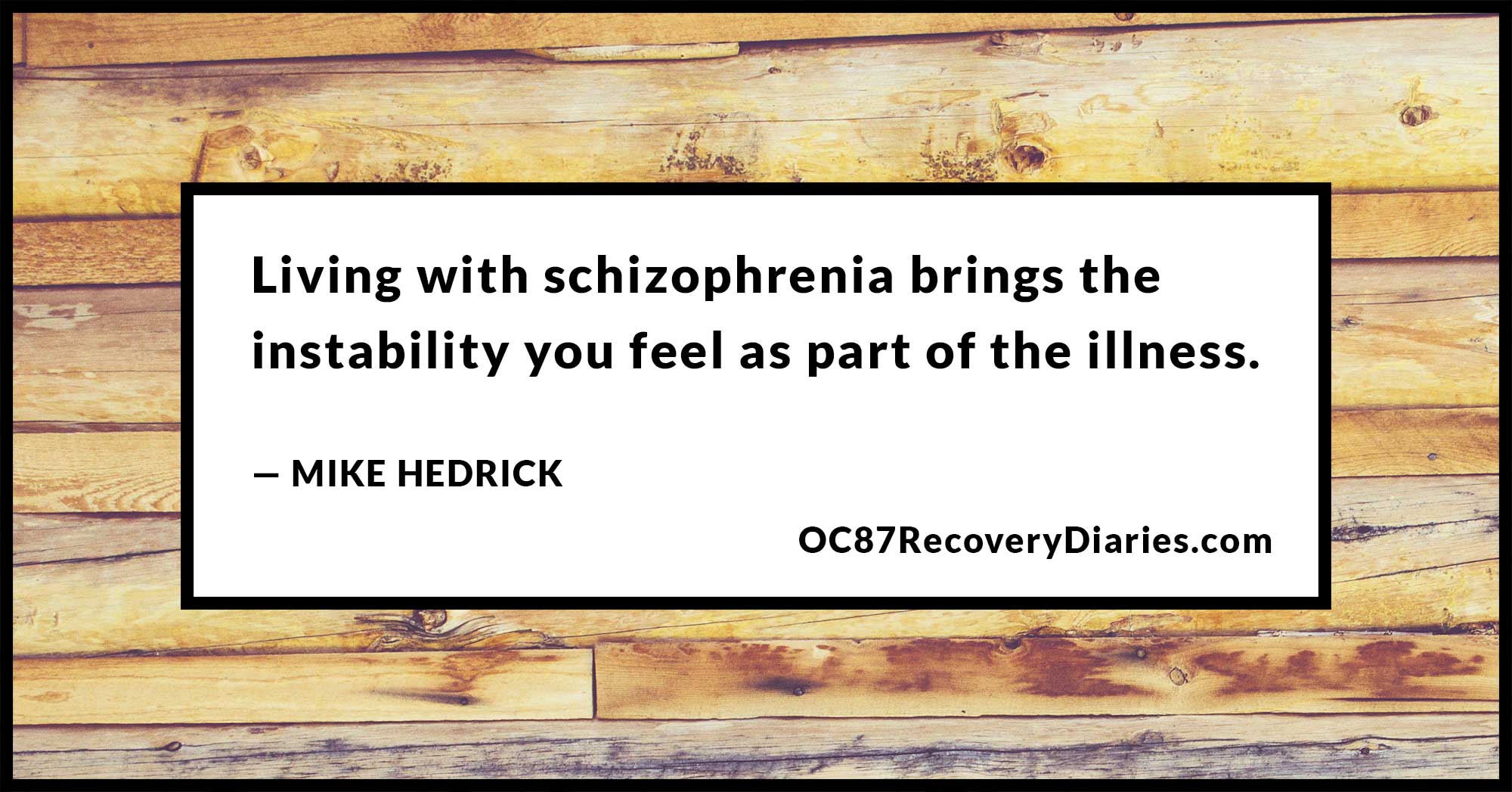 In any of these cases, normal life has little to no relevance to you. Once you’re diagnosed and you come face to face with the reality that the things you experienced were only in your head; you are now on the long road of rebuilding your life and your relationships to a point that’s stable.

Stability requires a great deal of awareness and reflection, as well as the ambition to put the discoveries you make along the way into practice. It’s taken me eleven years to get to a point where I don’t have to worry every day about paranoia and delusions. It’s been incredibly challenging, but also endlessly rewarding. Many young parents talk about how having a child is a second full time job–I think that finding and maintaining stability is probably just as consuming, taxing, and life-affirming.

Looking back on when I was first diagnosed with schizophrenia, I can remember the consuming confusion and pain I felt at having been told I was “crazy.” On top of that, I was still trying to cope with delusions and paranoia. I believed that words, song lyrics, or circumstances had special meanings, that everything was interconnected and intertwined and that I could figure out the secrets of the universe, if I just paid enough attention. That contributed to a heightened awareness that has stayed with me, but I also desperately wanted to forget my diagnosis and be normal, so I essentially devoted my life to practicing being “normal.” 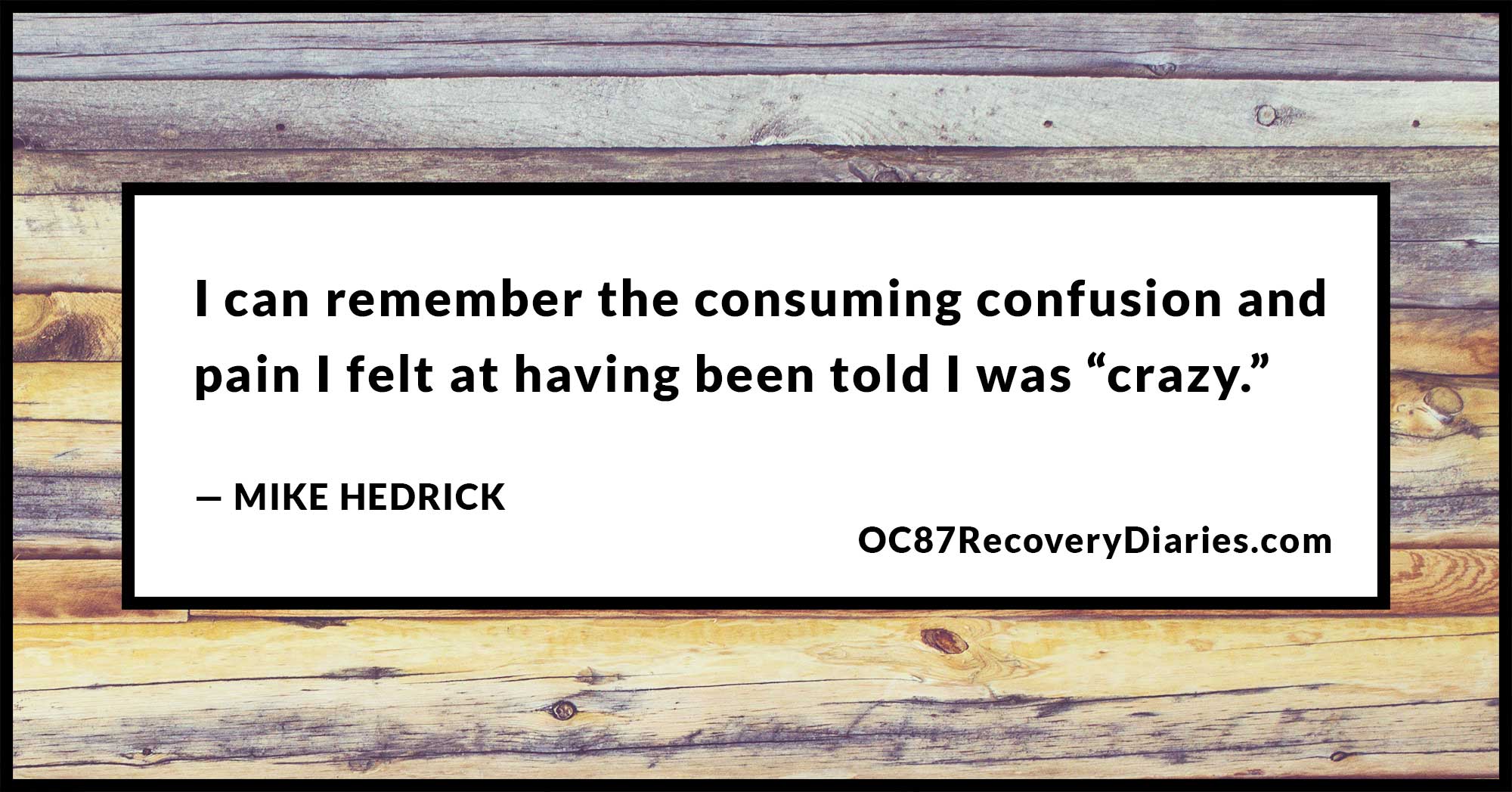 What I mean by “finding stability” is getting to the point where I was as normal as they came. This meant working on unwinding my delusions and paranoia, but also studying and practicing human behavior. I had to come to terms with, and refute, the things my brain was telling me by analyzing my thoughts that seemed to appear out of nowhere. I had to learn to recognize these thoughts for what they were: a result of my imbalanced brain chemistry, and I then had to learn and accept that the things they were saying had little to no basis in reality. Essentially, they were just components of my own insecurities — haunting me with every social interaction and every public appearance. I had to confront these insecurities that were so deep-seated within me that I’d spend hours and days obsessing over them and cowering in fear. 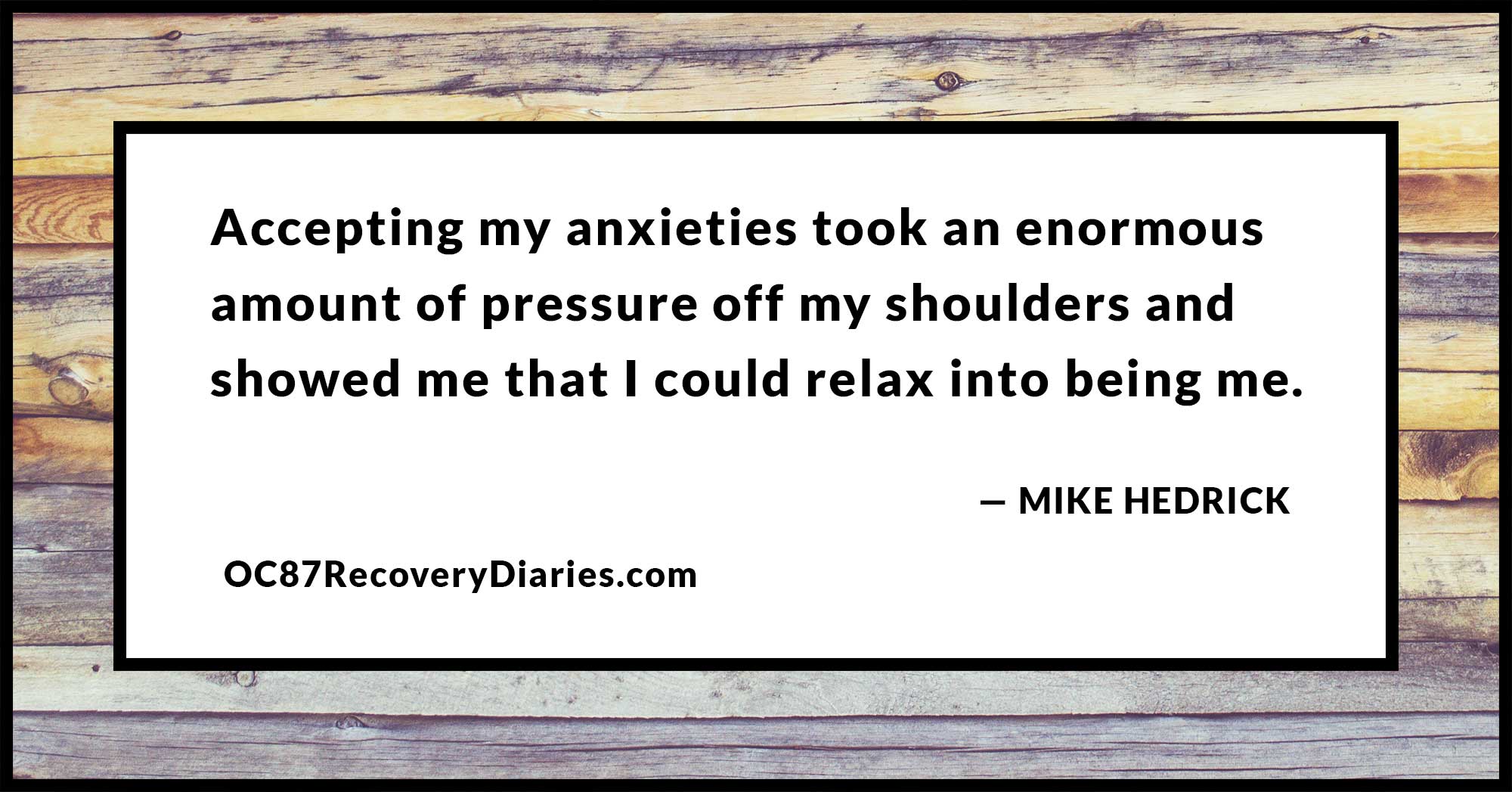 In therapy, somewhere along the line, I learned about acceptance, but it didn’t really register until almost a year later. I was sitting on my porch thinking about how painful and harmful my own thoughts were to me. The notion that, if I accepted these insecurities, I wouldn’t have to fight them so hard appeared in my head, and this notion changed the entire course of my recovery. Instead of trying to find a way around my insecurities, anxieties and paranoia, I learned to embrace them as facets of who I am. Accepting my anxieties took an enormous amount of pressure off my shoulders and showed me that I could relax into being me. The meds helped, but these techniques– recognizing, analyzing, and accepting– improved my clarity vastly. Pretty soon after I learned to accept myself and my thoughts, I learned to relax and I found that social interaction and appearing “normal” came so much easier. I was allowed to not worry about how I appeared to other people and I was allowed to not worry about whether or not I was crazy because I had completely come to terms with the label of crazy. “Crazy” was a part of me, but it wasn’t all of me.

I was able to take a deep, powerful breath and see that I was okay.

I was perfectly valid as an individual, and my thoughts were valid. Realizing your own validity and worth– that you are not some disgusting animal for having mental health challenges– is something I wish I could tell everyone I come across. It’s important to know that you matter in this world and that your thoughts, though at times these can be terrifying, are just thoughts. That’s where I found the most stability; in that notion of acceptance alone. After that, things seemed easier, more real, and I was empowered to claim some semblance of control over my life. 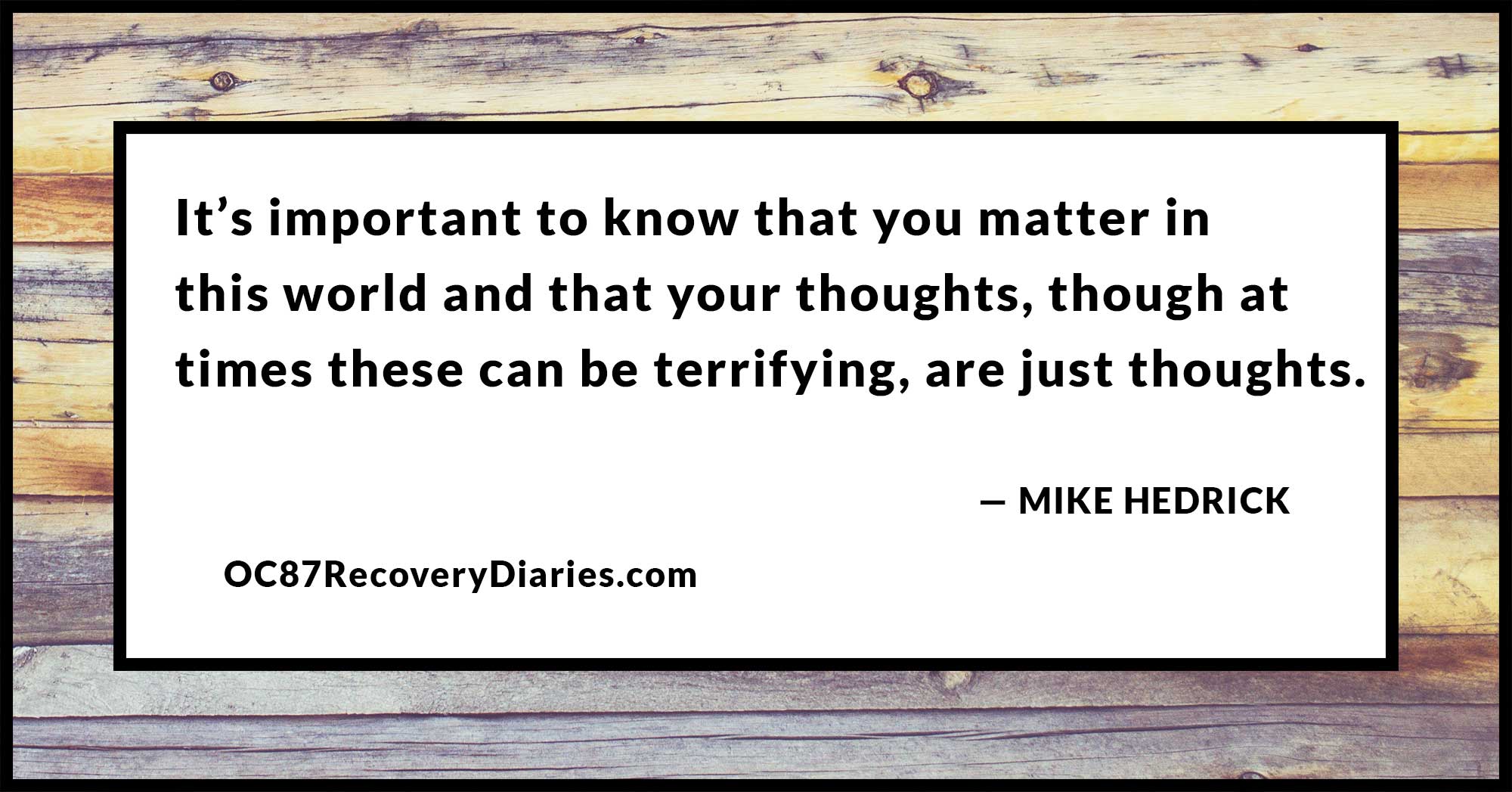 As the years passed, I continued to practice my social interactions, and my attempts at normalcy in every interaction that I had with another human being. Even completely inconsequential encounters with the pizza guy or the lady at the gas station were opportunities to rehearse my act of playing a “normal human being.” While things got somewhat better, I still suffered from anxiety and fear of what people thought of me. I still tried hard to appear as normal as possible for a long time. I tried to appear friendly and gregarious– like the social butterfly I was in high school. But I was still afraid.

Finally, after a long day of trying, I was laying on my couch listening to a hip-hop record, wondering to myself where it was that these rappers got their confidence. I decided, in that moment, that I was going to try not to be afraid anymore. That was another major turning point in my journey to find stability. In every situation where I felt my anxiety levels rising, I took a deep breath and said to myself, “I am NOT going to be afraid.” This meant that I didn’t have to try to be normal anymore, I didn’t have to worry that people wouldn’t like me if I wasn’t normal. If you think about it, nobody’s normal. Everybody has quirks and crazy moments, but it’s okay because they are who they are, and you are who you are. I am who I am. Not being afraid meant that I could be who I am. What the process comes down to is learning how to be you, not learning how to be a perfect human being. I wish I had known that eleven years ago but, in the end, I wouldn’t change the whole process of self-discovery and finding stability for anything in the world. 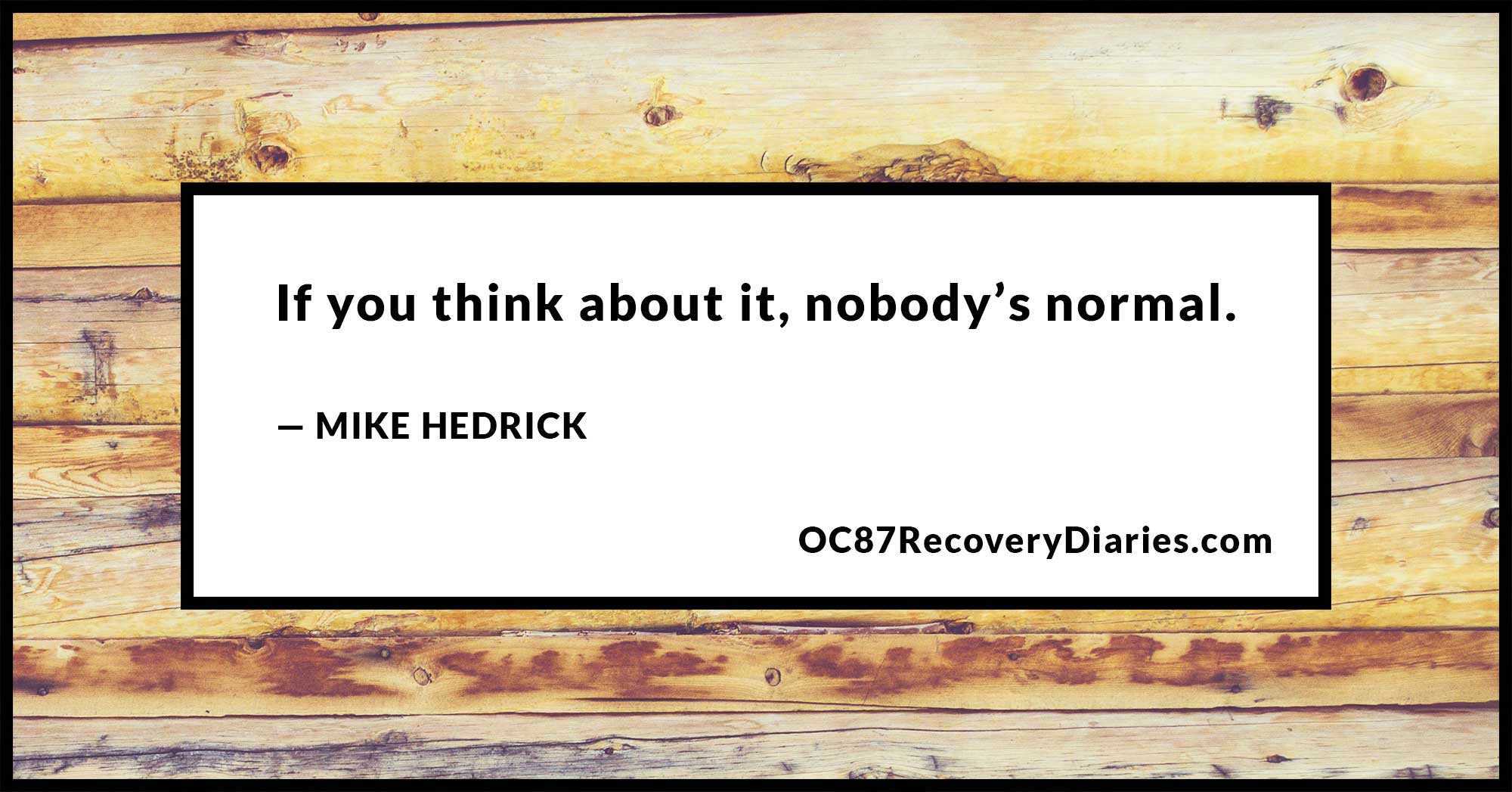 I will always struggle with depression, but finally I feel I am done clearing the land and am ready to plant the seeds that will become new growth.