Deciding to Get Better: The Choice to Fight Schizoaffective Disorder 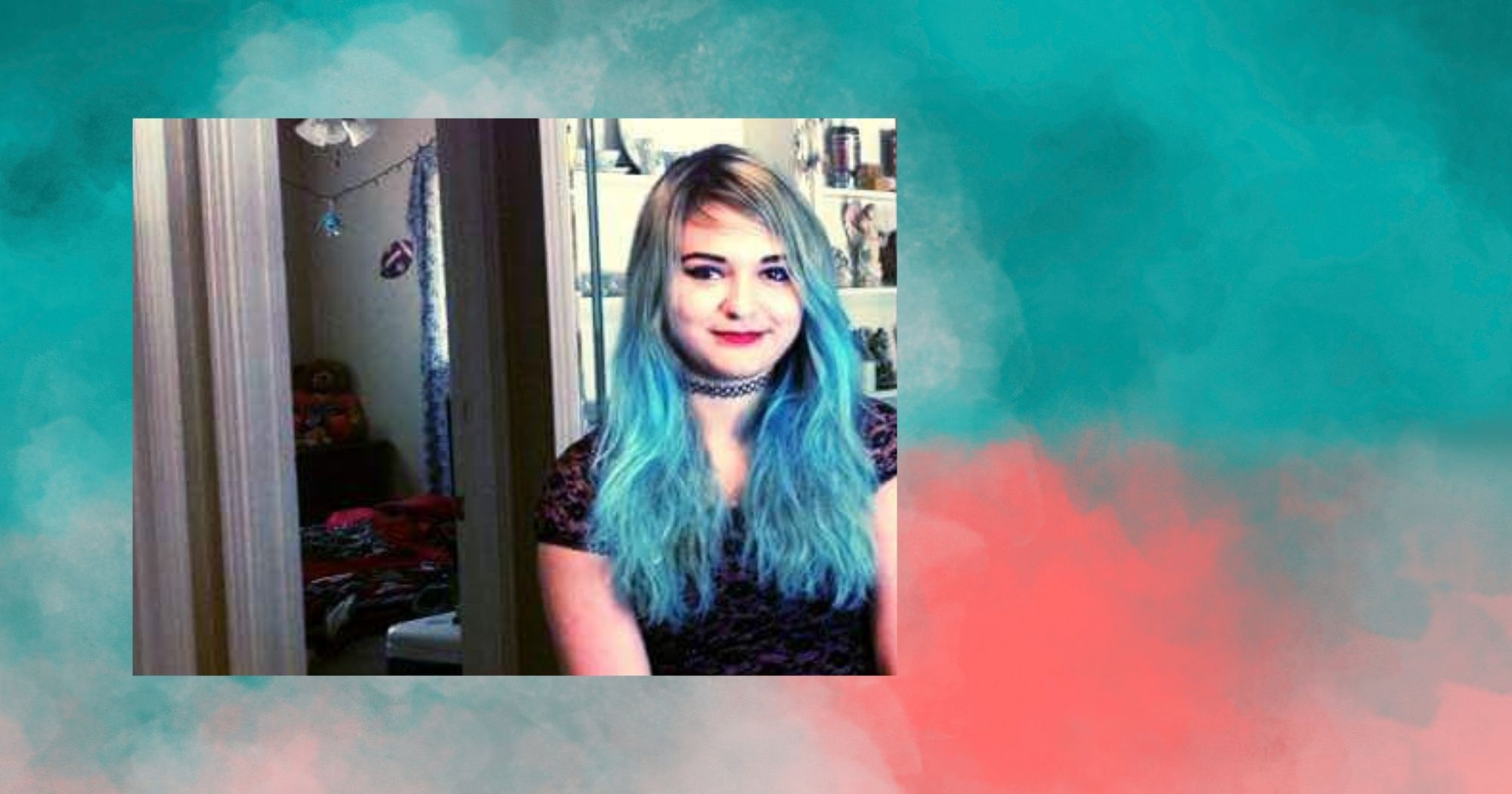 Deciding to Get Better: The Choice to Fight Schizoaffective Disorder

​It’s quiet. All that can be heard is the sound of my own heart pounding faster and faster. I wonder if this is death. Fear overtakes me. But this is not death—it’s a panic attack and it can, unfortunately, occur at any moment, unprovoked. What do I do in this instance? I find a quiet place, focus on my breathing and hope more than anything it passes.

My name is Cheyenne, I’m 25, and I am diagnosed with schizoaffective disorder (bipolar type), and I also suffer from severe anxiety. I’ve been anxious for as long as I can remember. Even as a child I would miss a lot of school due to my intense anxiety. Every morning I’d get so scared of the thought of going to school and being around others that I would become physically sick. Being in social situations has made me increasingly anxious ever since I was a little girl. Be it the fear of judgement from others or the fear of harm from others, I did not enjoy school. Once I would become ill and vomit, my mom would believe I was actually sick and let me stay home from school. 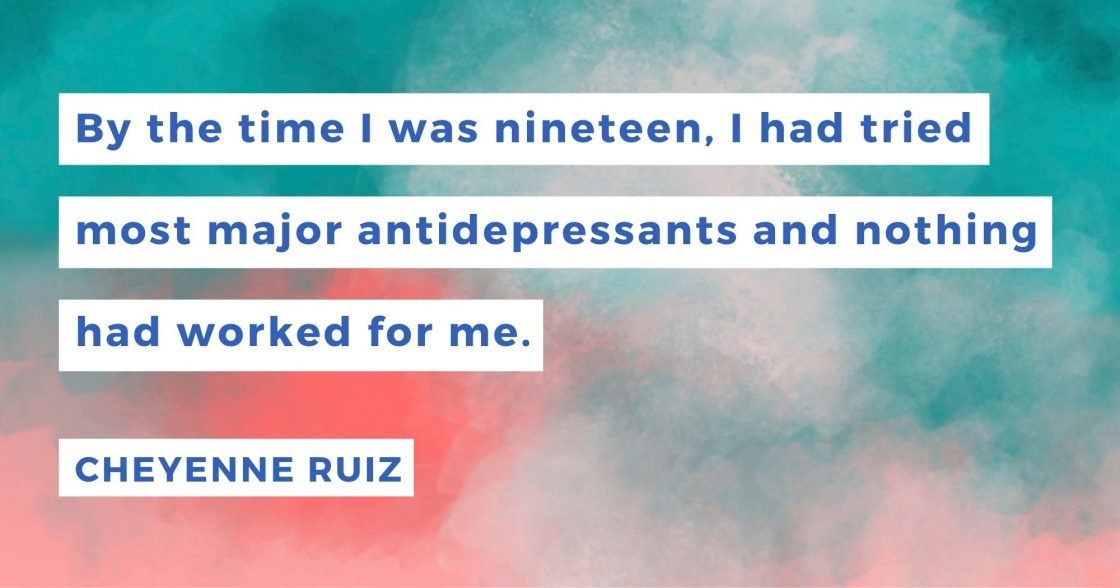 Missing school became such an issue that Social Services became involved and I was forced to go to school through my anxieties. Every day of second grade was such a struggle that my principal offered to drive me to school each morning. I declined. My mother worked night shifts at the jail at the time and supported us on her own so she couldn’t afford to take time off to attend school with me. Her solution, then, was for my grandma to attend school with me for three days. I was happy to accept this proposition. I figured my grandma, being the quirky but also anxious person she was, would be the perfect solution to battling my anxiety as I would feel the most comfortable with her as opposed to my other options. There was something about my grandma that eased my anxieties and fears. Perhaps it was the fact that she herself was so different.

I didn’t realize it as a child but looking back on it now, I see my grandma struggled in a lot of the same ways that I did. She was agoraphobic for as long as I knew her. I don’t recall many instances of her being in public places, I simply remember whenever she had to leave the house she’d bring up her “shopping headaches” which I didn’t think much of as a child. I simply thought shopping was too loud for her. I now see it was in fact too stimulating to be outside of her comfort zone (her house).

​So yes, I was the girl that brought her grandma to school, and my grandma was happy to oblige. She honestly had a blast meeting my friends, eating lunch with us, and watching me play at recess. She would have done just about anything for me. She passed away when I was thirteen which opened me up to a whole other struggle, depression. 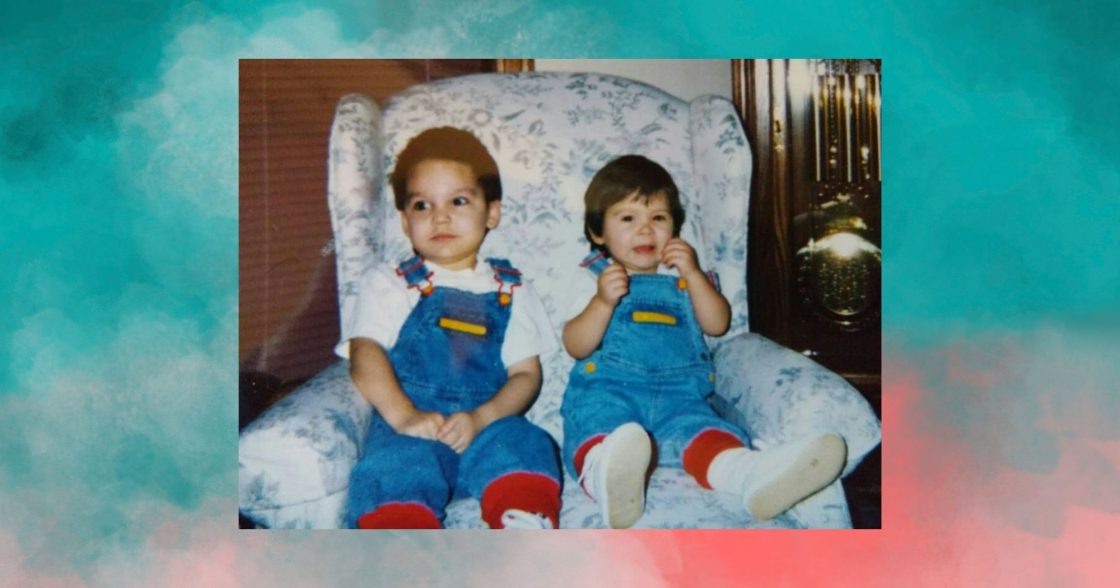 I couldn’t comprehend why one of my favorite people, a person who I felt understood my anxieties, would be taken from us all. I felt that she didn’t deserve the fate with which she was met and it left a hole inside my chest. I tried my best to deal with her loss, but then we moved states when I was fourteen. I left not only friends behind, but also family, and in doing so, awoke another struggle within myself—panic attacks.

The first one opened a door to a whole new world of fears. I was in the back seat of my mom’s car after we had gone to run an errand. I recall it was late at night and I began feeling oddly nauseous, seemingly out of nowhere. My heart began to race and I remember thinking “I need to get home, I need to get out of this car.” I felt as if death was coming for me. All I wanted was simply to lie down and die peacefully in my bed, and so that is what I did. I laid there and thought to myself about how my mom would find me in the morning and be devastated. I wondered if I should write her something to let her know how much I cared. But I didn’t, I simply let the fear take hold, fell asleep, and awoke the next day, alive and confused. Over time, they got worse, and would often put me in the hospital. 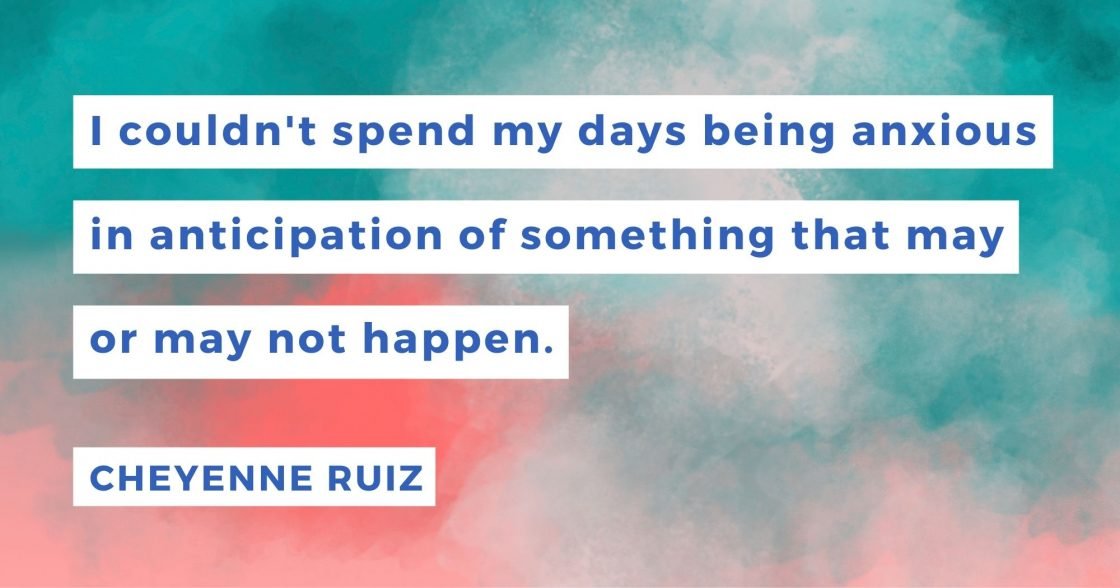 I tried to ignore the depression, anxiety, panic attacks, and function on my own for a few years but around the age of eighteen, I started seeing a psychiatrist due to a self-harm incident. My mother urged me to talk to someone and I knew she was right, I needed help. Before my first meeting with the doctor, I wrote out a letter entailing everything I had struggled with at that point, not only the depression and anxiety but also hallucinations and delusions I was starting to experience at that time. The psychiatrist began trying different medications for me to see what could help treat my depression and prescribed me something for my anxiety. By the time I was nineteen, I had tried most major antidepressants and nothing had worked for me.

​A few years later, I had found a combination of medication that kept me okay enough to not spend all day in bed. So, for a few years, I was okay. I moved out of my mom’s house and went to Colorado and I was happy.

Time passed, and the delusions and hallucinations came back, this time much worse. My boyfriend would tell me he thought I might be schizophrenic and that I should see a psychiatrist again, but I pushed back against such accusations. So it went on for a while like this—me hearing conversations in my head and thinking it’s snowing in the summertime, and him telling me I should see a doctor. 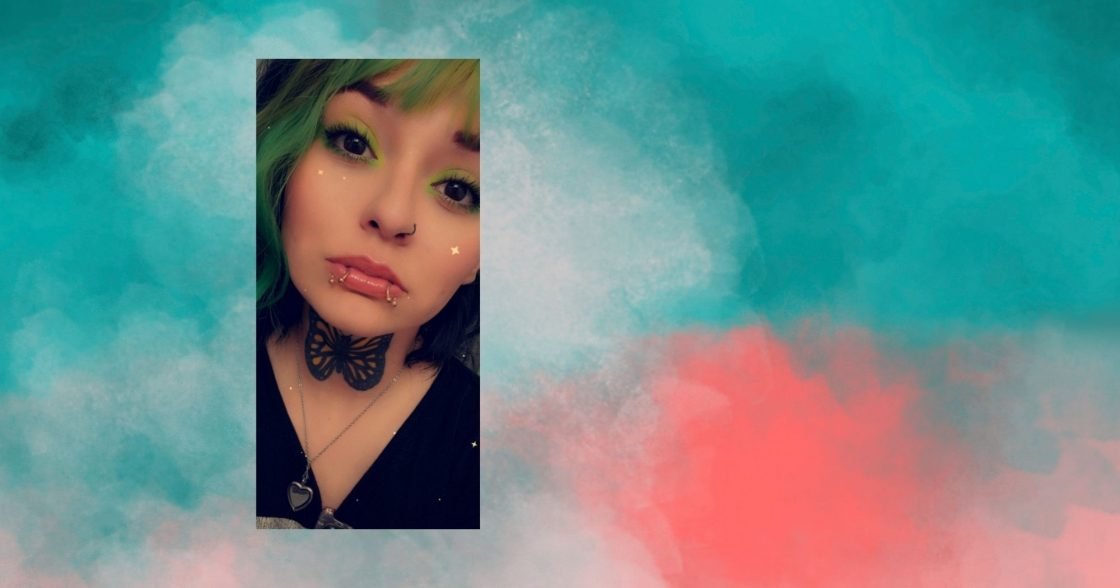 During this time I remember a specific delusion I had. It started with me looking at the time. The minutes were at 59. The next time I checked the time, however long later, I noticed the minutes were at 58. Funny. It continued on like this, 57, 56, 55, no matter how long I waited until looking at the clock again, 54, 53, 52, I didn’t know why this was happening, 51, 50, 49, until it finally dawned on me, when the countdown reaches 0, something will happen. Maybe I’ll die, maybe someone I love will die, no matter what though, I knew it would be a terrible occurrence. 48, 47, 46, I was getting nervous, I was going mad. I didn’t know how to prepare for this terrible thing that was going to happen. 45, 44, 43.

I didn’t know what it was, but I just knew it was. Of course what I “knew” to be true was only a simple delusion that no one around me could understand. When I would talk about my obsession with the delusion, others thought I was crazy. Maybe I was. Each day I seemed consumed more by the thought of the countdown. 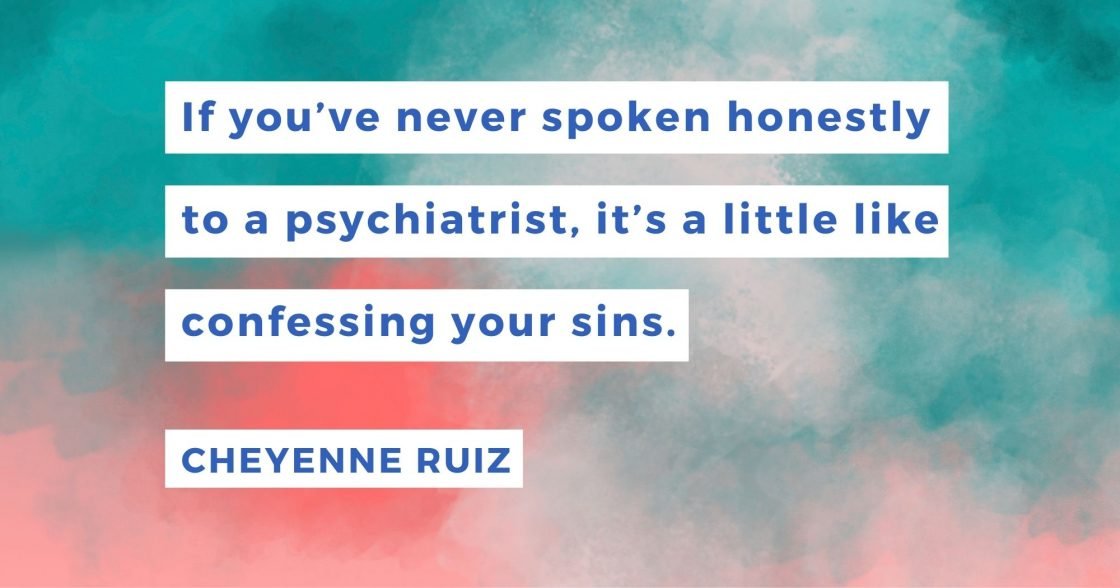 Until one day, I realized I couldn’t do it anymore, the stress was overtaking me. I couldn’t spend my days being anxious in anticipation of something that may or may not happen. So, I began convincing myself to stop checking the time, all together there for a while. It wasn’t an easy decision to make, it was almost as if I had a compulsion to do it. But I knew I had to or something would happen: I would drive myself mad.

​And obviously it stopped happening.

The time went back to normal and I haven’t had issues with it since.

I’d had enough of the fear and decided to see a psychiatrist once again. I had, up to this point, dismissed every suggestion that there was more to my mental illness than depression and anxiety. I wasn’t prepared for what was about to happen. 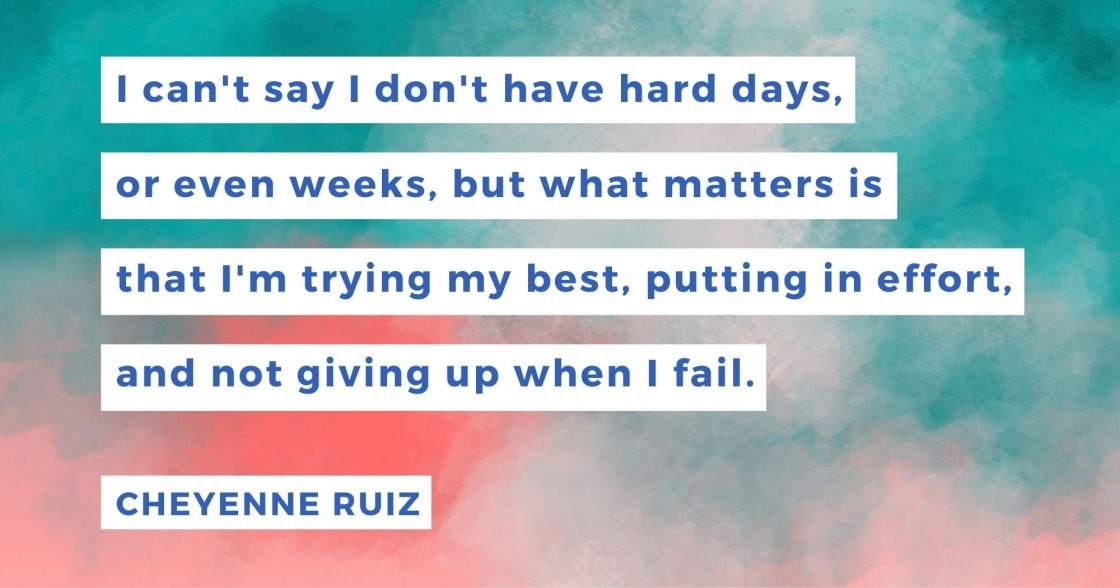 I explained what I had been experiencing to my doctor, and was completely honest about my mood swings, my delusions and hallucinations, and then I asked her what she thought. Which, if you’ve never spoken honestly to a psychiatrist, it’s a little like confessing your sins. You feel guilt, shame, and as you speak it all aloud, you realize just how mad it all sounds. She explained to me that it mostly sounds like schizophrenia, but that she was more inclined to say Schizoaffective disorder because of how very manic I was while I was talking to her. This diagnosis was later confirmed by other doctors.

The schizophrenic aspect of my diagnosis didn’t surprise me much because while I would get upset with my boyfriend for suggesting I was, I think deep down it was because I knew he was right. It was the bipolar that caught me off guard. I knew sometimes I was very happy and I knew sometimes I was very sad but I didn’t realize there was more to it. There was. Even to this day I struggle with my mood swings and regulating my emotions. 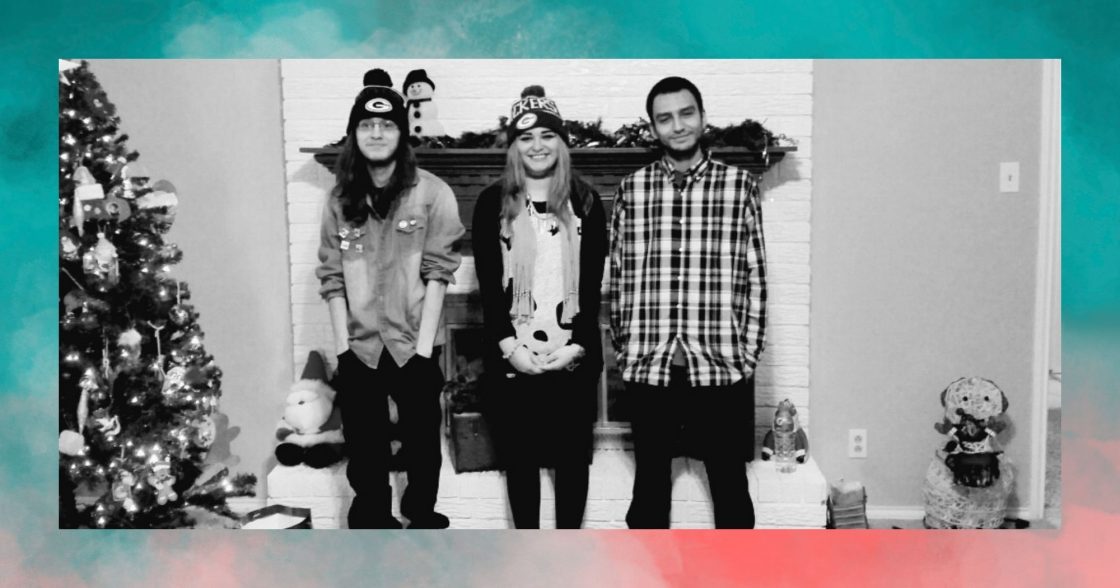 Today, I take medication for both my schizoaffective disorder and my anxiety and I’m in therapy trying to better myself. I’m studying automotive repair to prepare for my future. I can’t say I don’t have hard days, or even weeks, but what matters is that I’m trying my best, putting in effort, and not giving up when I fail. I aspire to be a hard-working member of our society and I think I am on the right path to do so.

My struggle is a definitive part of who I am and has made me the resilient person I am today. I decided to get treatment because I realized I couldn’t accomplish the things I wanted to otherwise. I have, what feels like, been to hell and back and I have come back from things I thought I’d never come back from. If I have learned anything from my journey this far it would be to always keep fighting.

Cheyenne Ruiz is a twenty-five-year-old woman born in Green Bay, Wisconsin but currently living in Colorado. She enjoys spending time with family, friends, and pets, reading/writing, and listening to all kinds of music. She’s currently studying automotive repair. You can find more of her writing here.