The Light Switch Effect of Stress 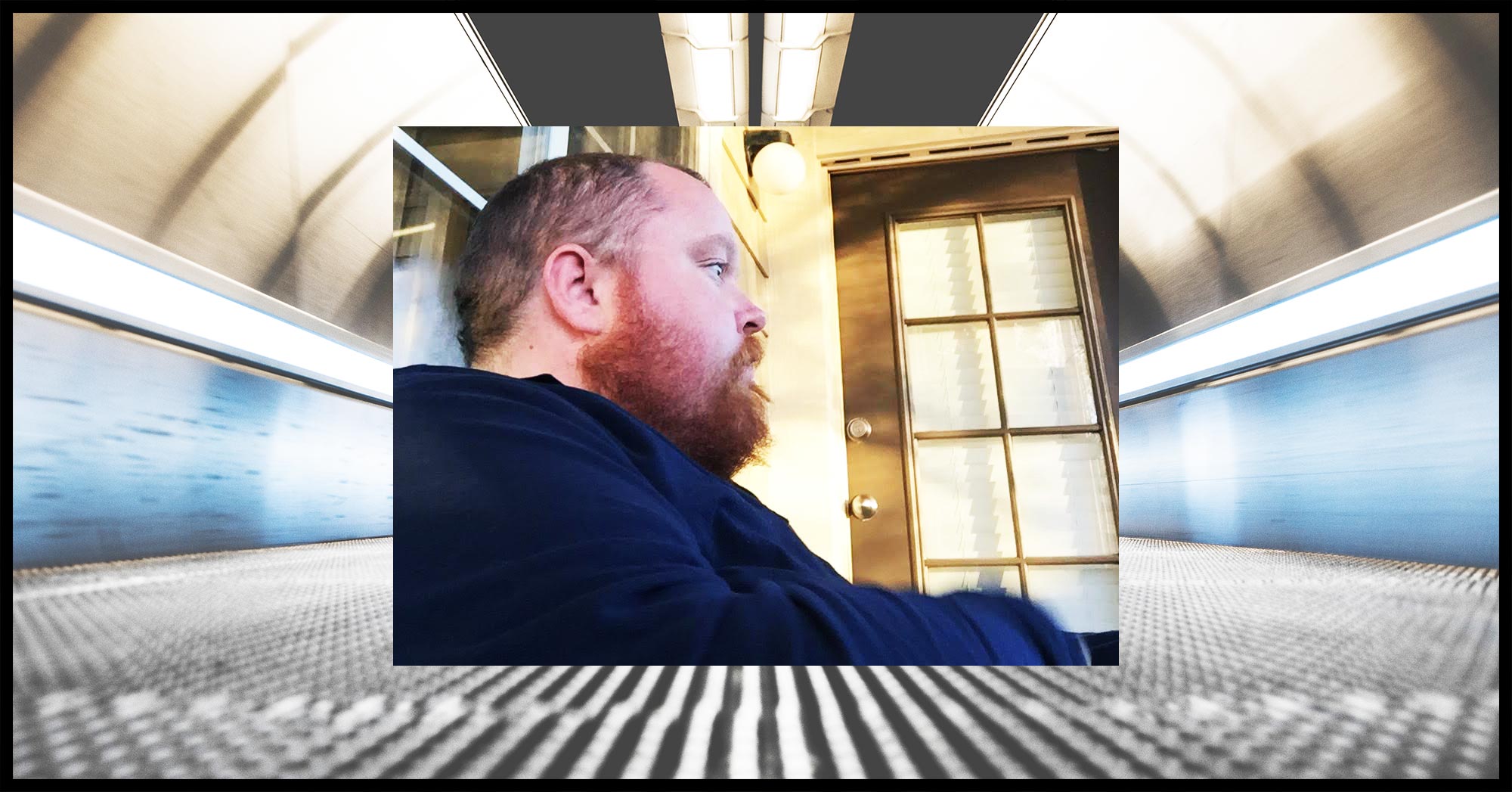 Imagine you have cancer, complete with nasty symptoms that flare up at inopportune times. Now, imagine that your cancer is in remission — you haven’t had symptoms for a few months — and then something big happens. You break up with a partner, or you’re moving, or one of your parents dies. All of a sudden, your symptoms flare up again and leave you reeling in pain. This obviously isn’t a reality for cancer but for mental illness it is. There’s something strange that happens when stress enters your life. Your risk of a heart attack increases, your risk of diabetes increases and your symptoms of mental illness intensify pretty significantly.

A few months ago I moved to a new place. I had a list of things I needed to do before the move in order to make it go smoothly. This list had things on it that would take days of work and planning and, as the move approached, stress began to pile on. Worry became ever-present and I started to get paranoid. I was worried about my health, about my new neighbors, my new town, and I was worried that the move itself would fall apart and everything would come crashing down. I began to get wary of the people around me, looking for little tells and tics that would indicate they were about to say something nasty or that they would attack me. It became harder for me to go into stores because I could feel everybody’s eyes on me and I worried that laughter I heard was about me. 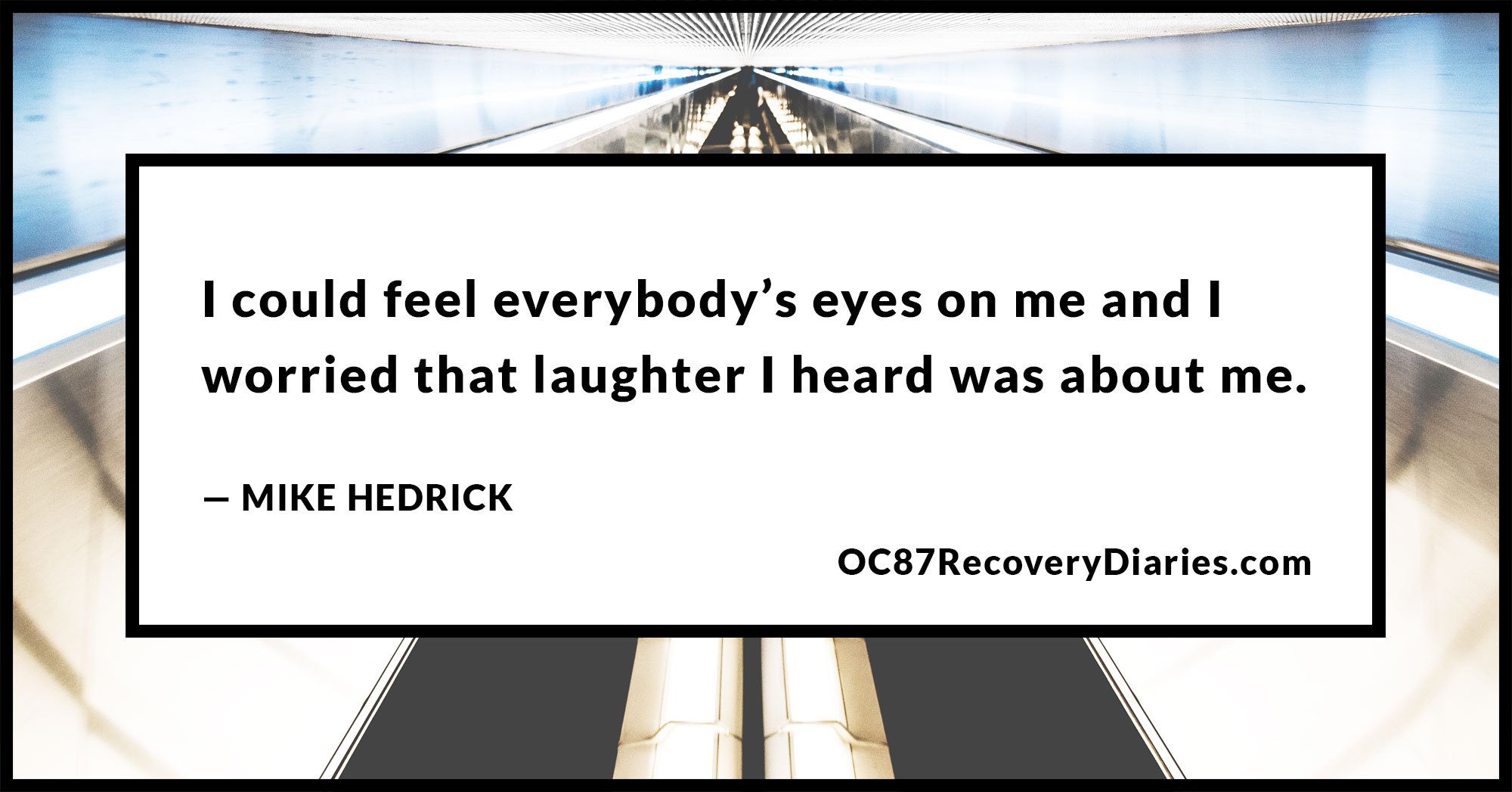 I also started to get depressed. I felt done. Overwhelmed and exhausted. I began to think about what would happen if I died. The stress got worse and the worries became more pronounced as moving day approached. Finally, the day came and, working from morning to night, it went smoothly. I settled into my new home and I felt worlds better, the depression stuck around though but, with meds and therapy, I tackled that, too. The fact remains that, during that month of my life, my most “light switch of stress” on my symptoms, I was having a really hard time.

I don’t know why stress seems to trigger seemingly dormant symptoms. It probably has something to do with the fear centers of our brains, but stress is something that has the potential to create significant problems.

Reducing stress is a major part of dealing and living with mental illness and it’s something that a lot of “normal people” take for granted. They ratchet it up and up, higher and higher until they breakdown somehow and have no choice but to do something drastic like quit their job or divorce their partner. With schizophrenia, you have to be extra careful because seemingly everyday stressors have the potential to blow you up. 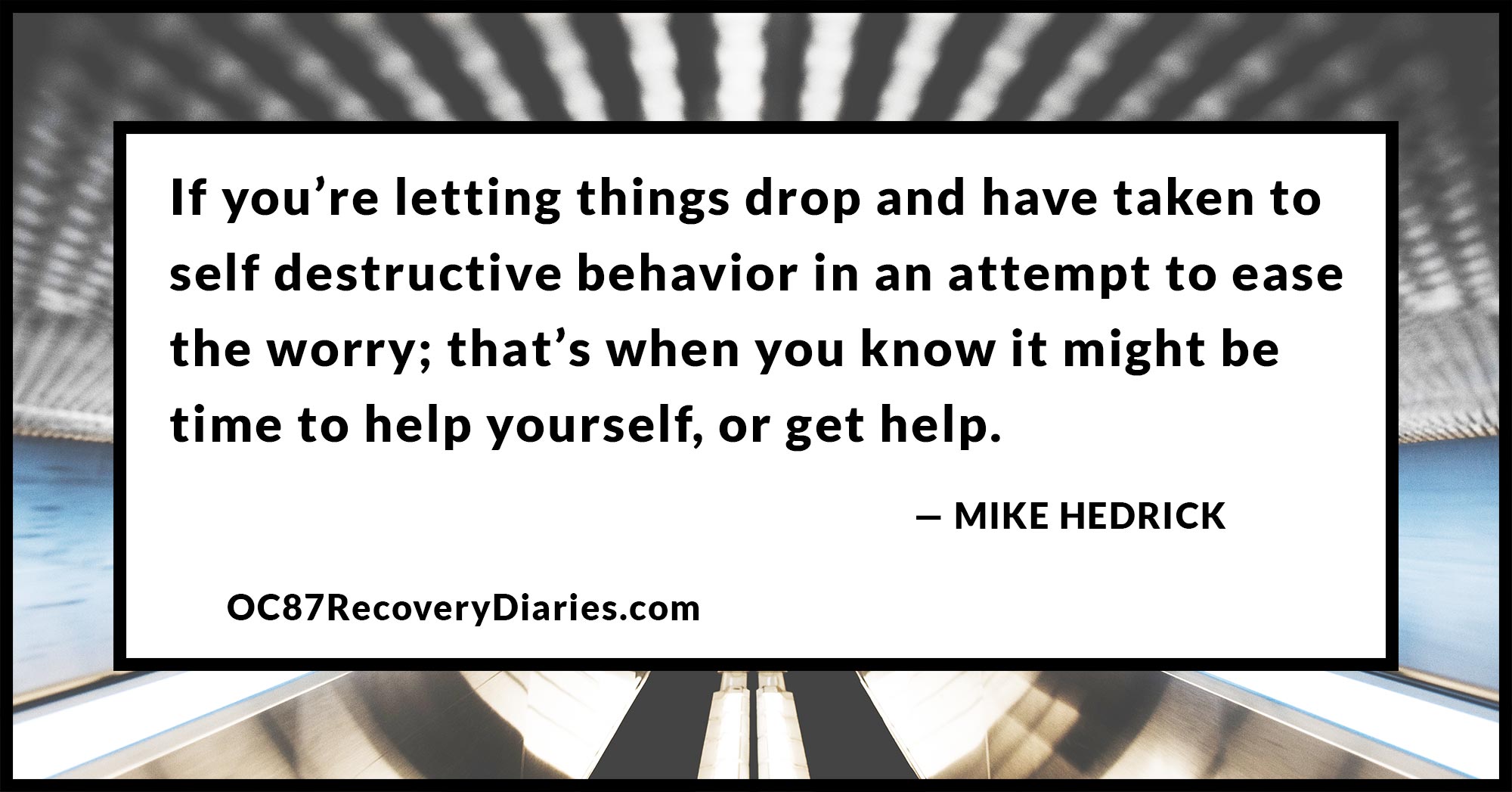 The point is; you have to be careful with stress regardless of whether or not you have a mental illness. Too much stress for anybody can be detrimental. My thinking is that when stress reaches a point where you can’t handle everyday responsibilities and relationships, your light switch has definitely been flipped and it’s time to take a step back. The trigger is almost irrelevant: it can be worry about the things that need to be done or worry that you won’t get to a place where you want to be professionally because things just keep adding up. If you’re letting things drop and have taken to self destructive behavior in an attempt to ease the worry; that’s when you know it might be time to help yourself, or get help.

I had, at one point in my life, taken on eight writing jobs a month and was about to take on two more for another magazine. I was overwhelmed, to say the least. I was having serious difficulty managing my work and the rest of the things I had to do to be a stable human being. I didn’t know if I could do it anymore. One day, in the midst of all this, I met a girl at a coffee shop. She and I spoke for about an hour. Over the next few days, I started to think about this girl more and more. I got to a point where it was bordering on obsession. I went back to that coffee shop every day. She was never there, and I was caught between worrying if I had made a bad impression on her and praying that I would see her again. 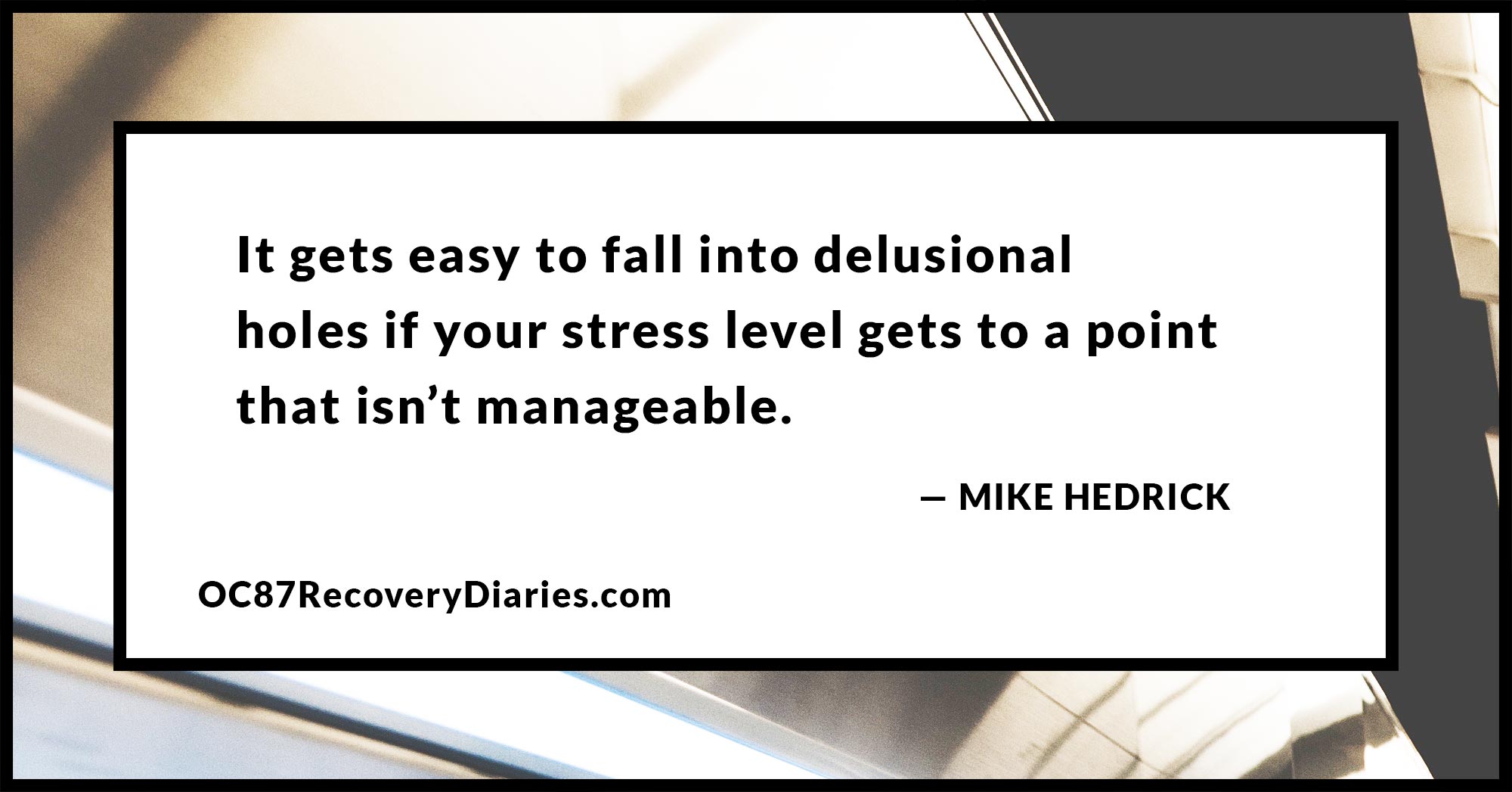 Somehow, I came to the conclusion that she hated me so much that she had secretly put a tracker on my car in order to know where I was at every moment of the day, simply so she could avoid me. I would think about this stuff for hours, unable to carry on a conversation or fall asleep at night. Finally, I realized I was in over my head. I put the brakes on. I stopped going to the coffee shop and I lessened my workload. I also took my “as-needed” anxiety meds for a week or two and saw my psychiatrist until I got to a point where I was comfortable again.

Clearly, thinking someone has put a tracker on your car in order to avoid you is not rational thinking, and I am convinced that episode was triggered by stress. That switch got flipped. In times like that, it gets easy to lose yourself. It gets easy to fall into delusional holes if your stress level gets to a point that isn’t manageable. Thankfully, schizophrenia isn’t cancer, but too much stress isn’t good for anyone, schizophrenia or not. Remember to keep yourself in check, and know who is in control of that light switch. 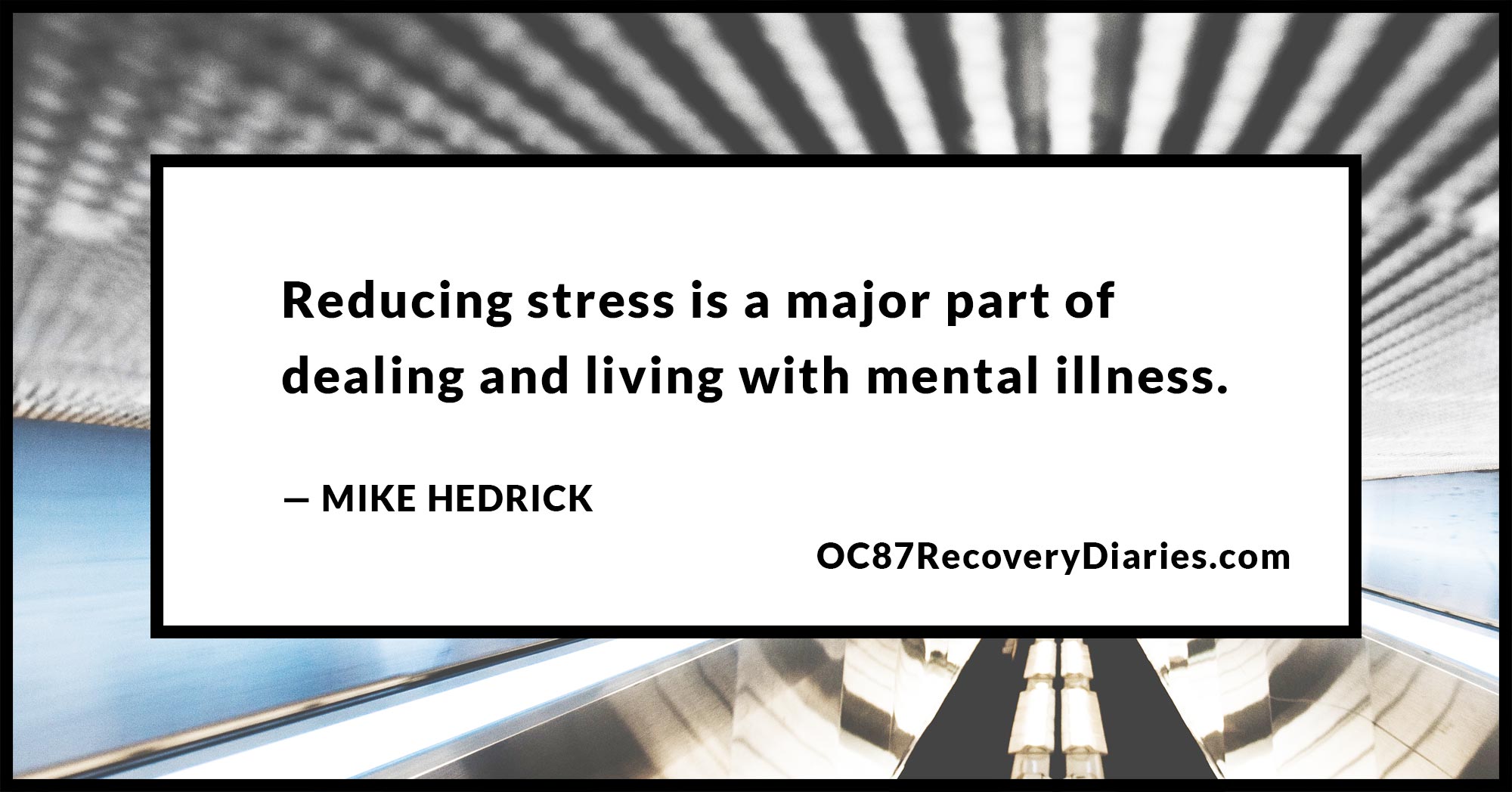 The severity of my depression in the wake of losing my job solidified the notion that, for people with mental illness, having a job can make all the difference.