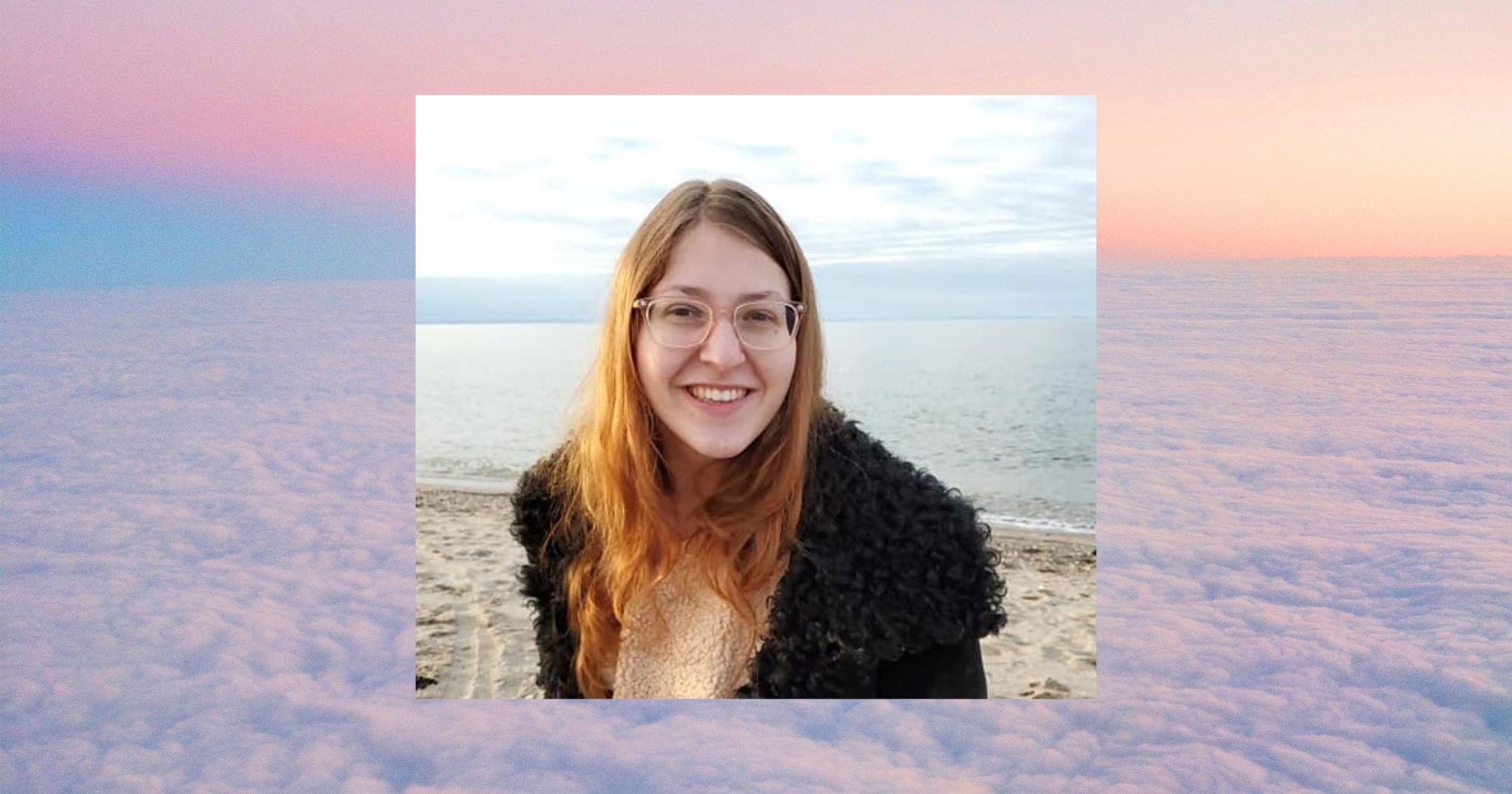 ​The first time I was truly aware of what I was putting into my body I was in a middle school health class. The class was meant to steer us away from drugs, teach us the dangers of unprotected sex, and instill healthy eating and exercising habits in us. The only thing health class did for me was solidify my disordered eating habits. For the year and a half prior to taking health class, I tried to eat less and exercise more in order to become “healthier” (translation: thinner). 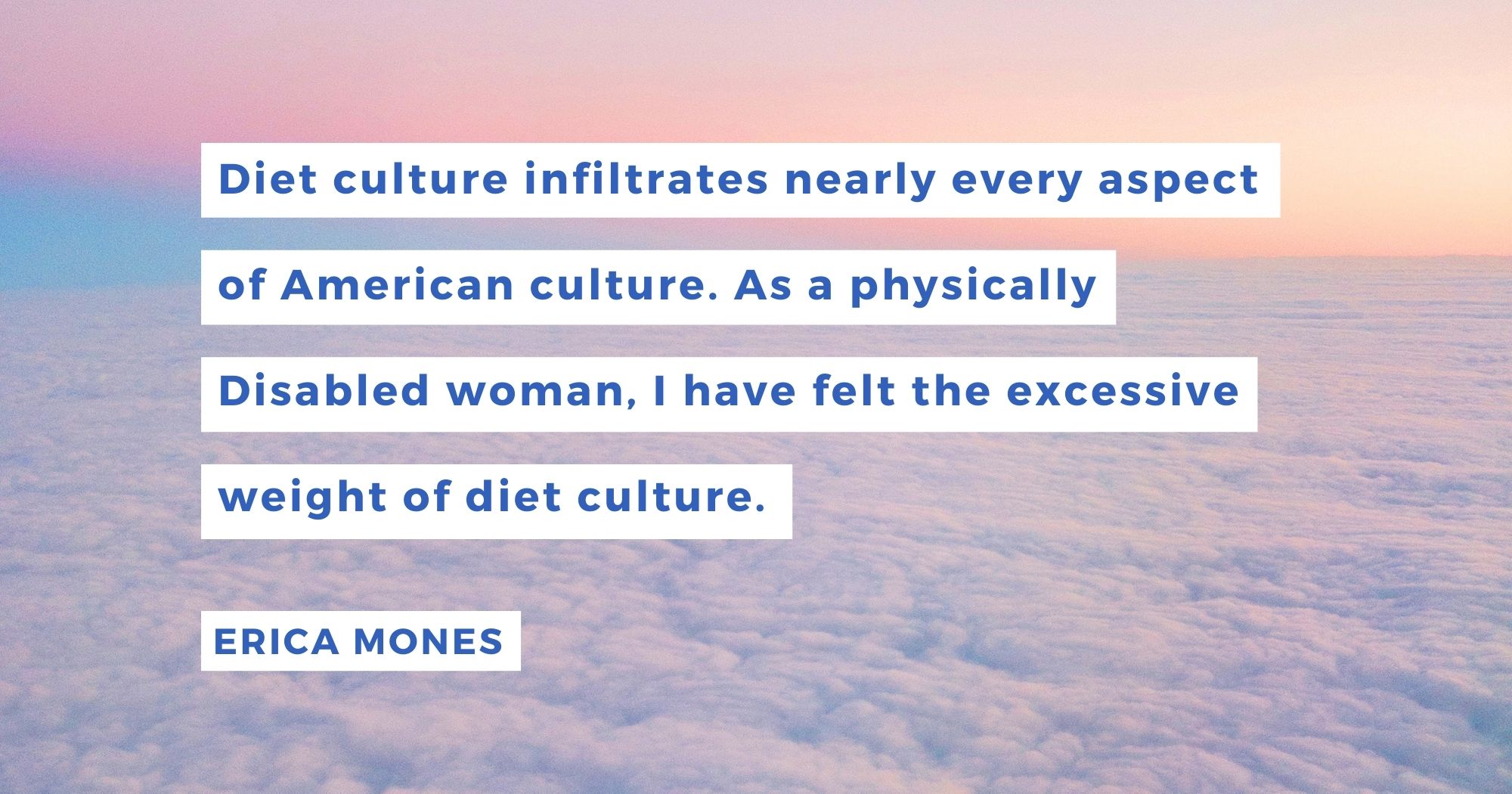 The health teacher brought in plastic fruits to show us what a serving of banana and apple looked like respectively. On the SmartBoard, images of spaghetti, green beans, corn, potatoes, meat, and salad floated before our eyes. Hearing this made me feel uneasy as if I couldn’t trust my own body. We were not supposed to indulge in a slab of meat bigger than our fists. Allegedly, that was how big our stomachs were. If we stretched them out too much, we would gain weight. My teacher assigned us food journals for the following two days. I returned home that afternoon hyper-aware of every morsel that entered my mouth. The class left me feeling confused. I questioned my ability to eat properly. I wondered if I could trust my own body.

Diet culture infiltrates nearly every aspect of American culture. As a physically Disabled woman, I have felt the excessive weight of diet culture. I often consider how my weight affects others. I think of my weight when others have to lift me into a car or help me up when I fall. I also think of my weight and how it affects my ability to maintain the level of independence I currently have. In order to be able to undress myself at night, I must swing my legs over a bench and use my abdominal muscles to bend to reach my shoes and wiggle off skinny jeans. If my stomach was any bigger, this task would be more difficult. I exercise regularly in order to keep my muscles toned and strong, but I also have a history with eating disorders, which makes exercising complicated.

​Exercise can develop into an addiction for people with eating disorders.  I fell victim to exercise addiction when I was fourteen, believing that I could exercise my problems away. While quotes to the effect of “The only bad workout is the one you didn’t do” circulate on social media, they do not factor in that for some people, exercising can actually do more harm than good. However, people are so accustomed to the belief that exercising is good, that these messages go unquestioned. American culture views exercise and dieting as an act of self-discipline. These patterns of behavior are not only viewed as private acts of self-care, but also a debt we owe society. 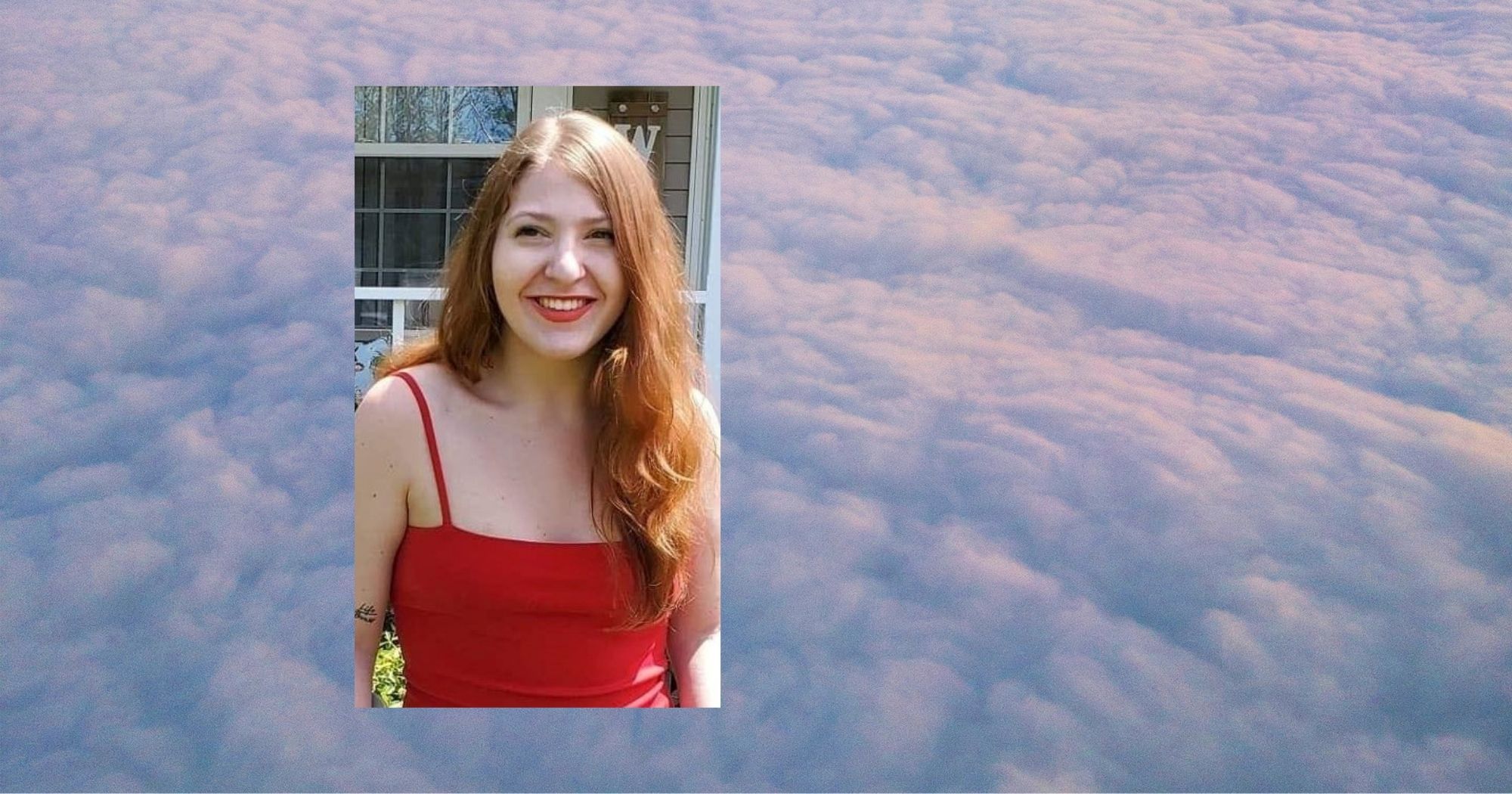 In a world that considers childhood obesity a form of “child abuse,” eating a balanced diet and exercising regularly, or at least, maintaining a weight that is considered “healthy,” are regarded as virtuous and even obligatory actions. Instead of understanding weight and physical health as separate from one’s morals, the lines between morality and perceived health have become muddied. 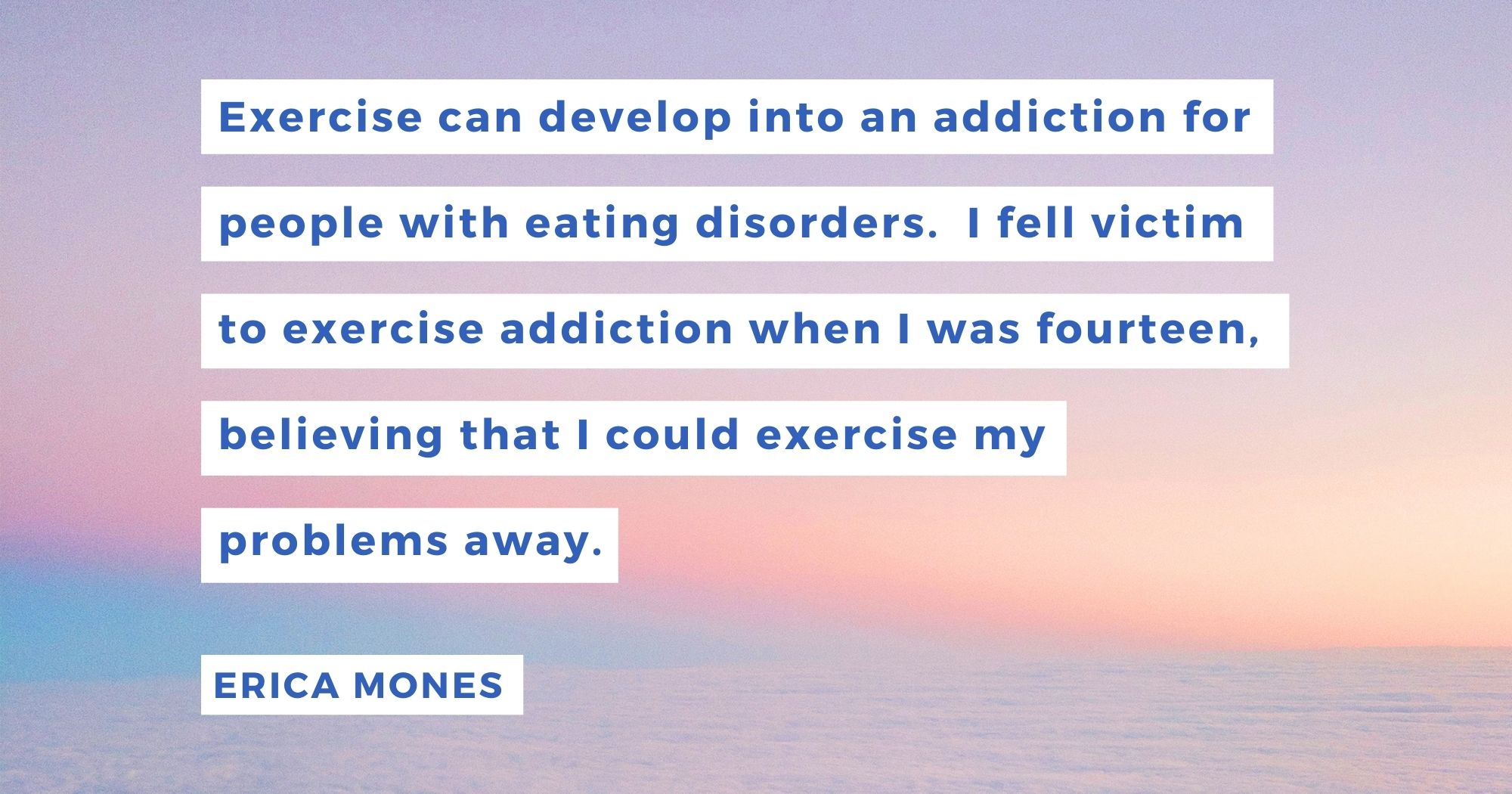 I began exercising when I was in middle school. I went to my pediatrician for my annual physical, and when I stepped on the scale, it showed that I’d gained nearly twenty pounds in a year and I hadn’t grown much taller. The year before, I’d had surgery on my leg to set my bone in place. As a result, I was in a wheelchair for six months. Like any inactive preteen, I gained weight. However, it didn’t bother me too much until my doctor pointed it out. Besides my weekly swimming lessons that lasted for an hour, I didn’t exercise much, so my doctor told me I should exercise. Immediately when I got home, I called up two of my friends to see if they wanted to go for a walk.

​From that day forward, I went on daily walks—rain or shine, and when it snowed or it was too cold, I used my treadmill at home. I wasn’t obsessive at first; I truly wanted to be healthier, but as soon as other people started to notice that I was losing weight, I was hooked. Even a teacher at the middle school I attended whom I only knew in passing, said, “Wow, you’re getting skinny! I’m jealous.” Comments like these are often well intentioned, but they send a message that losing weight is a goal to be sought after. I felt as though I was finally doing something right. 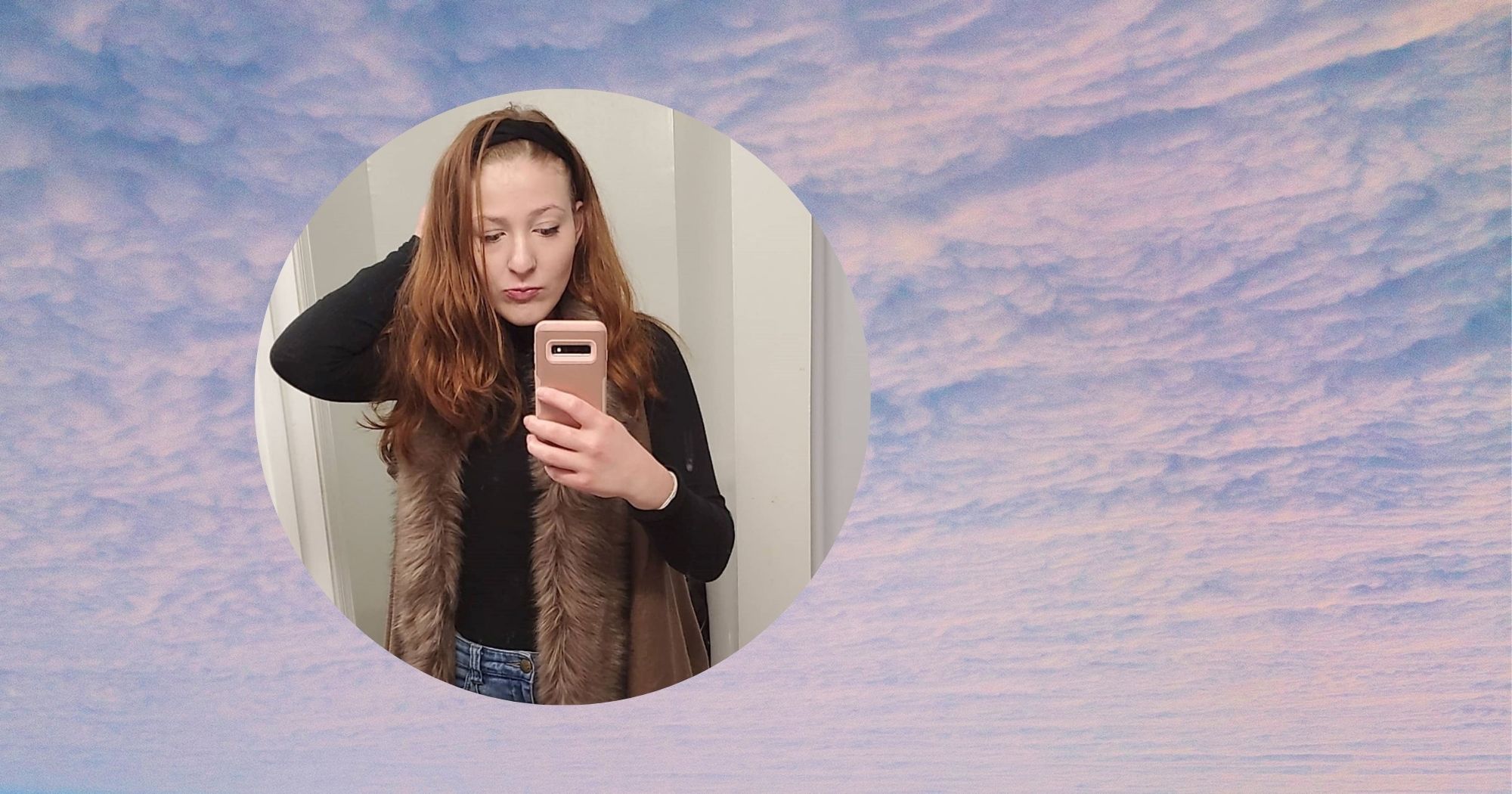 My disordered relationship with exercise continued through high school and even my first semester of college. Exercise became my top priority; it came before friendships, relationships, and even school work. I exercised when I was sick or injured. The amount I exercised (specifically the number of calories I burned) often dictated what I allowed myself to eat. If I consumed more than my allotted calories, I would make myself sick.  This cycle continued through my first year of college. Being able to make myself throw up felt like an accomplishment. I had stumbled upon pro-ana pages, websites that promote disordered eating, as an adolescent. I saw people write about how they couldn’t make themselves sick, so I felt as though I was “succeeding.”

While exercise is typically associated with improved health, compulsive exercise can cause health issues such as bone density loss, amenorrhea (or loss of menstrual cycles), muscle soreness, bone and joint pain, injury, altered resting heart rate, and frequent illness and upper respiratory infections. Interestingly, my health teacher only spent one class period talking about eating disorders as opposed to four weeks of teaching us about exercise. At the height of my eating disorder, I was fatigued and sore most of the time, and contracting a simple cold would wipe me out. I hated feeling run-down, but I chalked it up to a necessary evil of being in shape. I had no energy and I started having issues with my hips from the excessive exercise. 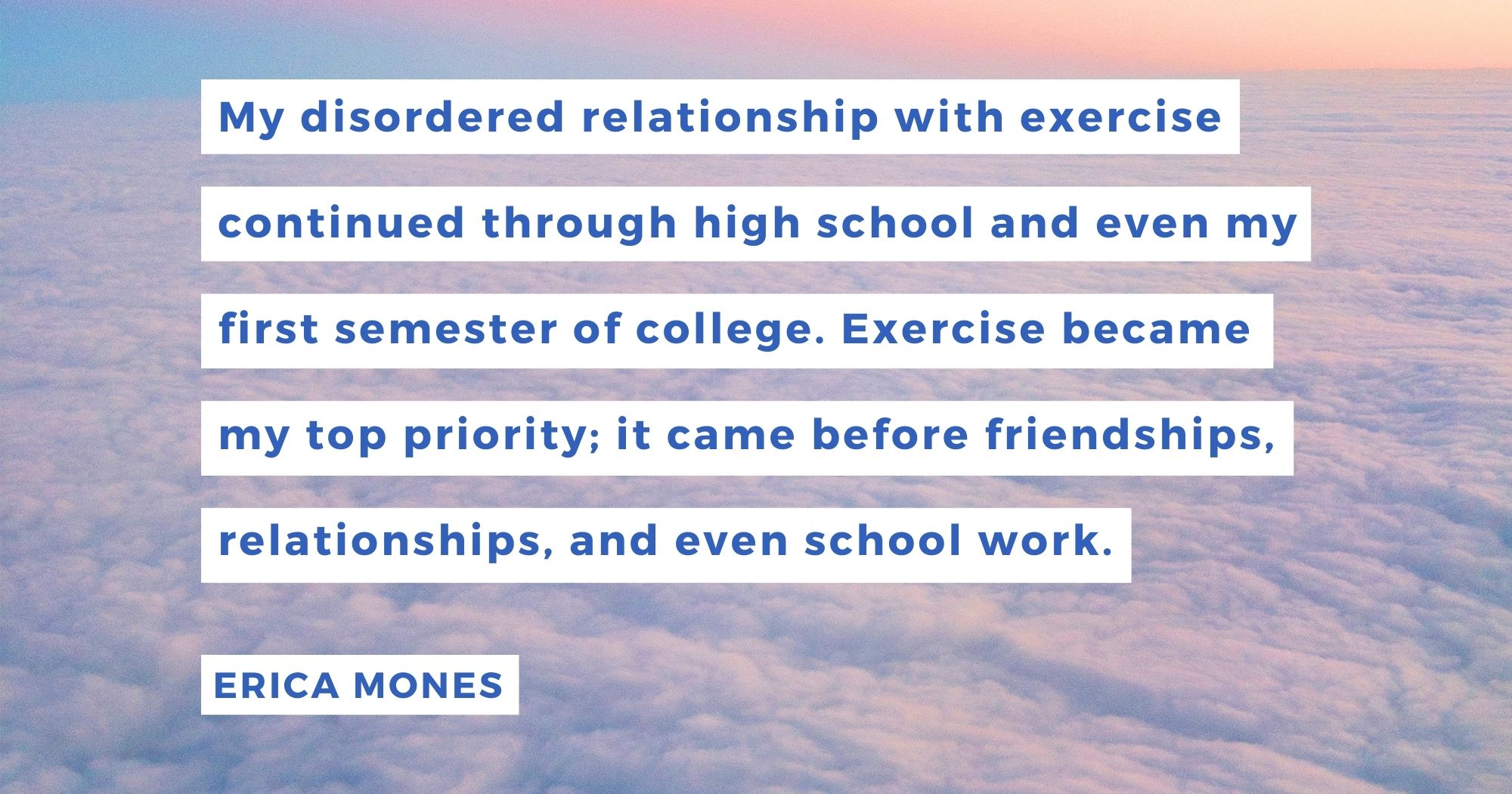 I spent most of my life doing everything in my power to avoid gaining weight. Afraid of adding weight to my already stigmatized Disabled body, I exercised for hours and counted calories meticulously. I had reached a point where my exercise and eating habits stretched beyond a pursuit for health, and became more about controlling my body. I remember not caring if I was unhealthy as long as it meant I was as small as possible. Starving myself and exercising gave me temporary elation, but eating made me feel like a failure.

​Within my own recovery journey, I have had to face and continue to face the reality that my need for control over food and my body are not healthy, and they never were in the pursuit of health, but instead, an attempt to make my Disabled body a little more socially acceptable. The social worker at the treatment center helped me confront my negative feelings toward my disability. 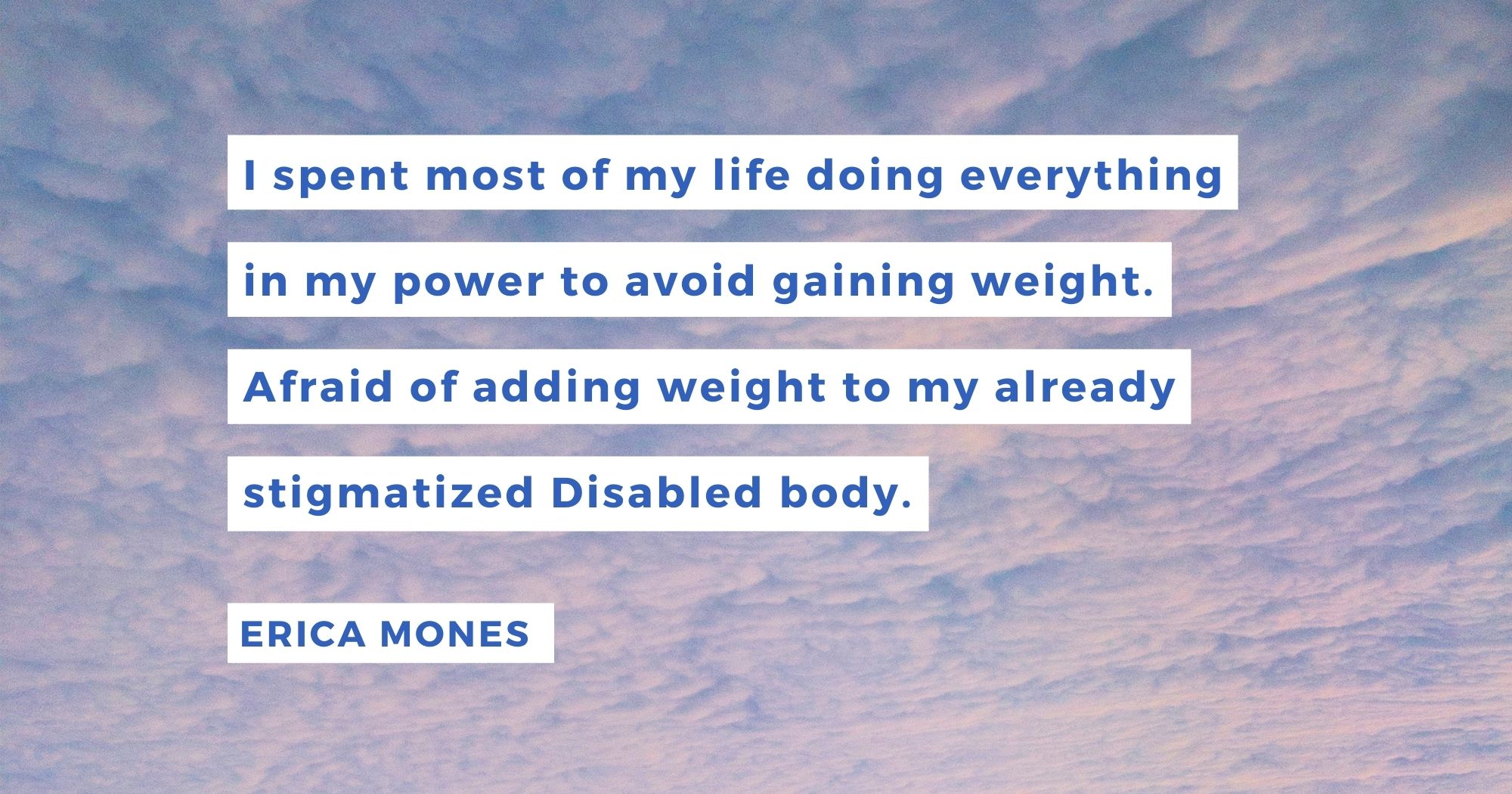 I went to a partial hospitalization treatment program in 2016 and again in 2018 to address my eating disorder. I signed an agreement with my school that I would go to treatment after suffering frequent falls on campus. There I would eat meals and attend therapy, have body image workshops, and nutritional counseling with the other patients. While my time in treatment did not rid me of my eating disorder entirely, it equipped me with the tools necessary for finding ways to cope that do not involve controlling food or my body. More importantly, I learned how to be introspective and identify what emotions and circumstances trigger me to turn to my eating disorder.

My eating disorder stems from the shame of being dependent on others to live. I find that diet culture and its not-quite-distant cousin health (or fitness) culture are just extensions of the American myth of rugged individualism. That is to say that there is an unspoken contract that if we discipline our bodies through diet and exercise and maintain a culturally ideal (i.e. thin) body, we can achieve success and independence from disease and disability. My eating disorder served as a way to get me to achieve this. I needed to prove to others and to myself that I could eat less than nondisabled people and I could exercise more. It made me feel as if my diet and exercise negated my disability. 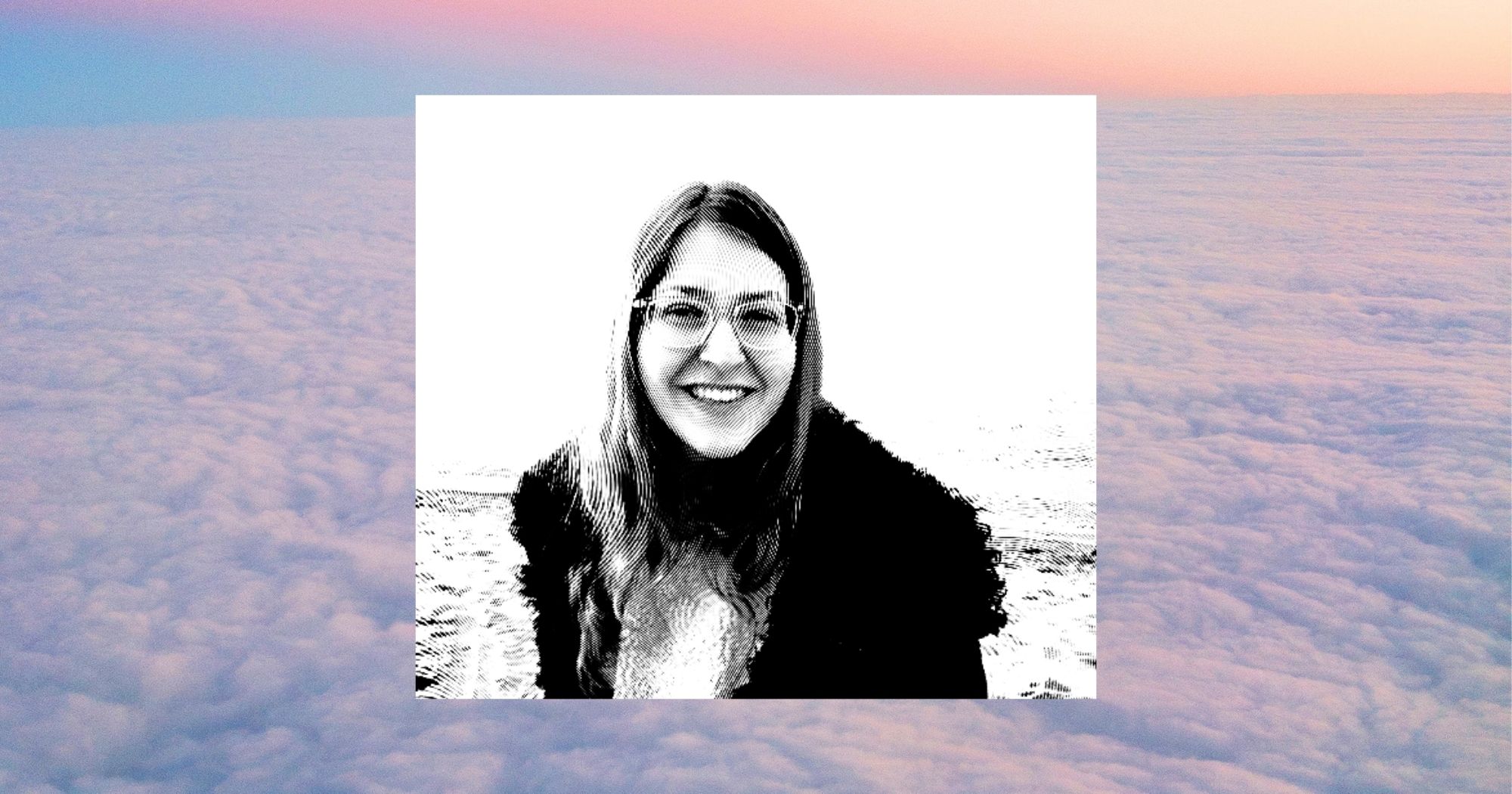 Throughout the past four years, I have had to unlearn not only the pervasive messages of diet culture (that even appear as “Calories Count!” stickers on vending machines) that thinness equals success, but also society’s ableist ideals that I be independent. Recovery has taught me that my disability is an asset, not something I need to overcome or feel ashamed of. I have confronted the reality that I will never meet conventional beauty or even success standards, and through that, I have learned that I am enough.

Erica Mones is a 23-year-old writer and disability advocate from Long Island, New York. She is a staff writer at Cripple Magazine and has been published in The Progressive, Rooted in Rights, Audacity Magazine, Well+Good, and Popsugar. She has a Bachelor’s in Classical Civilizations and Writing from Loyola University Maryland. She has a blog called Running with Crutches and a podcast called No Standing Ovations Please.