When Control Disappears and Anxiety Stays by Jovana Djukic 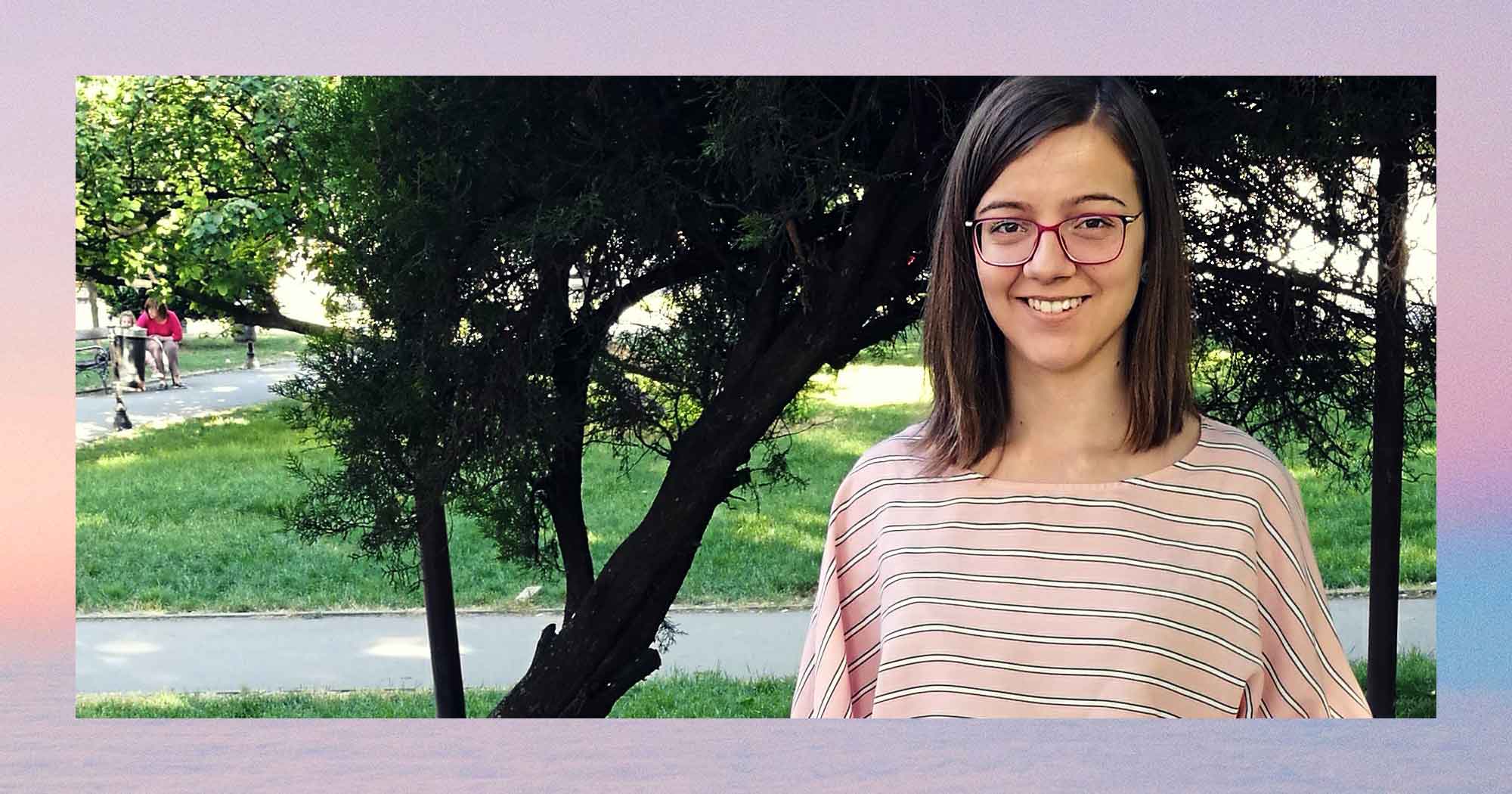 When Control Disappears and Anxiety Stays

A happy, healthy, boisterous 21-year-old. I was an excellent student with a full-time job. My family and friends were proud of me. Sure, I had my struggles, like everyone else. I was pretty skilled at burying my insecurities, low self-esteem, and obsessive overthinking underneath my bubbly exterior. Everything was under control, just like I always wanted. Control. Little did I know that my life was about to change with four little words.

It was a frigid January night. She wandered into my room, woke me up, and uttered four little words, “My head really hurts.” Then she collapsed. I was terror-struck but somehow managed to call an ambulance. Who knew that five minutes could feel like an eternity? My mom had suffered a severe stroke. The following week was a haze. She was in the intensive care unit, hovering between life and death. I was trying to stay strong. 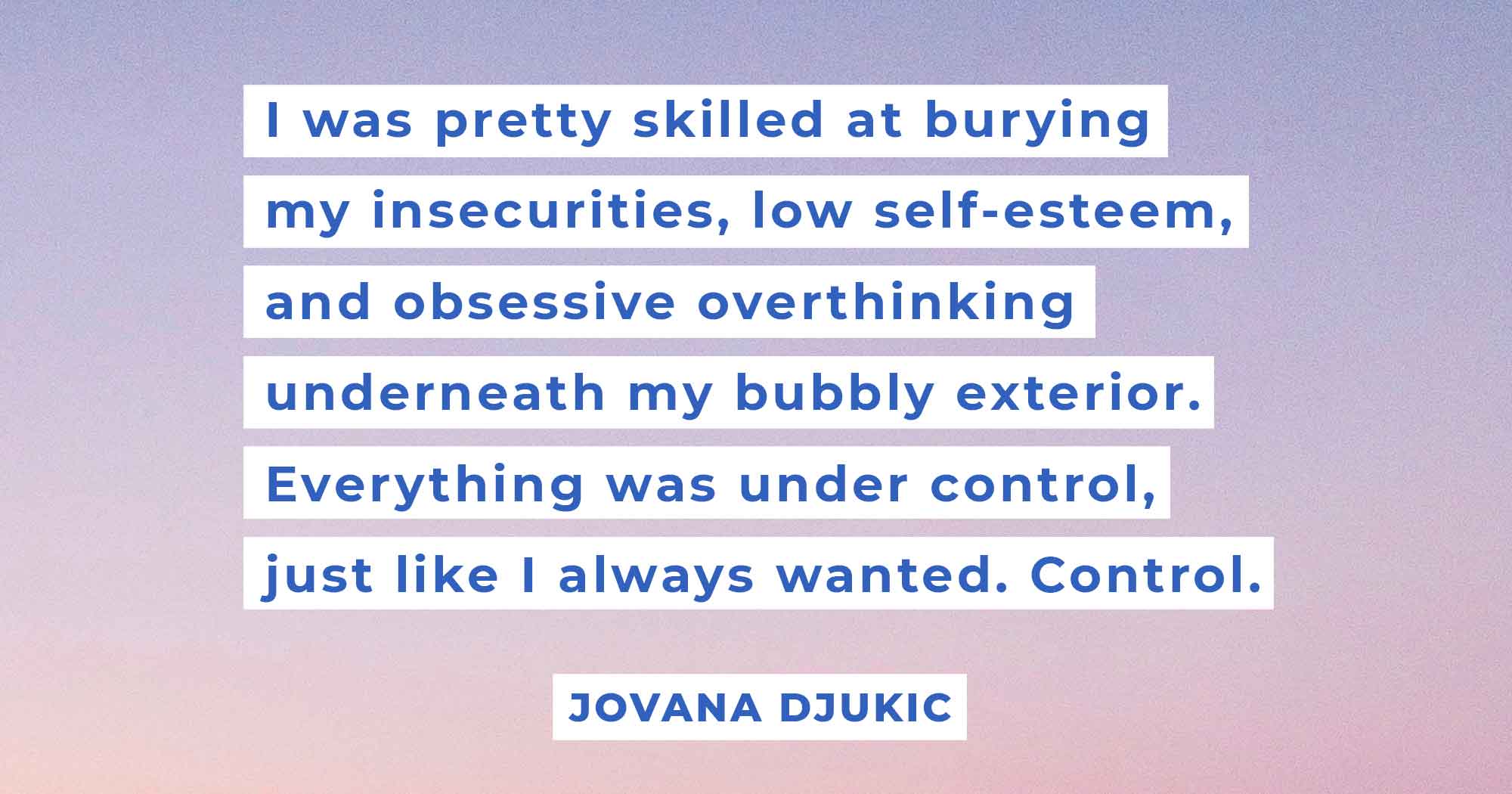 Another January night came. The hours passed by as I lay in my bed crying and creating endless worst-case scenarios until my brain couldn’t take it anymore and I finally fell asleep. I suddenly woke up with a feeling of impending doom. Something was terribly wrong, but I couldn’t pinpoint it. I was gasping for air and it felt like I was going to sink through my bed. I got on my feet but I was so dizzy that I could barely walk.

My room was warm and cozy, but my body was violently trembling from head to toes. My dad was still awake. “What’s wrong? You look terrible,” he said. I opened my mouth but no sound came out. My heart was beating furiously. My left arm was numb. My voice finally returned. Five little words. “I’m having a heart attack!” I was rushed to the hospital and I vividly remember the conversation I had with the doctor. “This is just stress, you’ve suffered psychological trauma. Just take this pill and you’ll be fine.”

I wish it was that simple. That pill definitely couldn’t prepare me for what I was about to face in the following two years.  I initially refused to believe the doctor’s words. I was positively sure that I was gravely ill. I dreaded going to sleep because I thought that I was going to die in sleep. I had panic attacks almost every night and, as a consequence, I developed insomnia. During the day I was shakey and dizzy all the time. My stomach refused food and I completely lost appetite. Negative thoughts multiplied and collided in my brain. I just couldn’t switch them off or shift my focus. 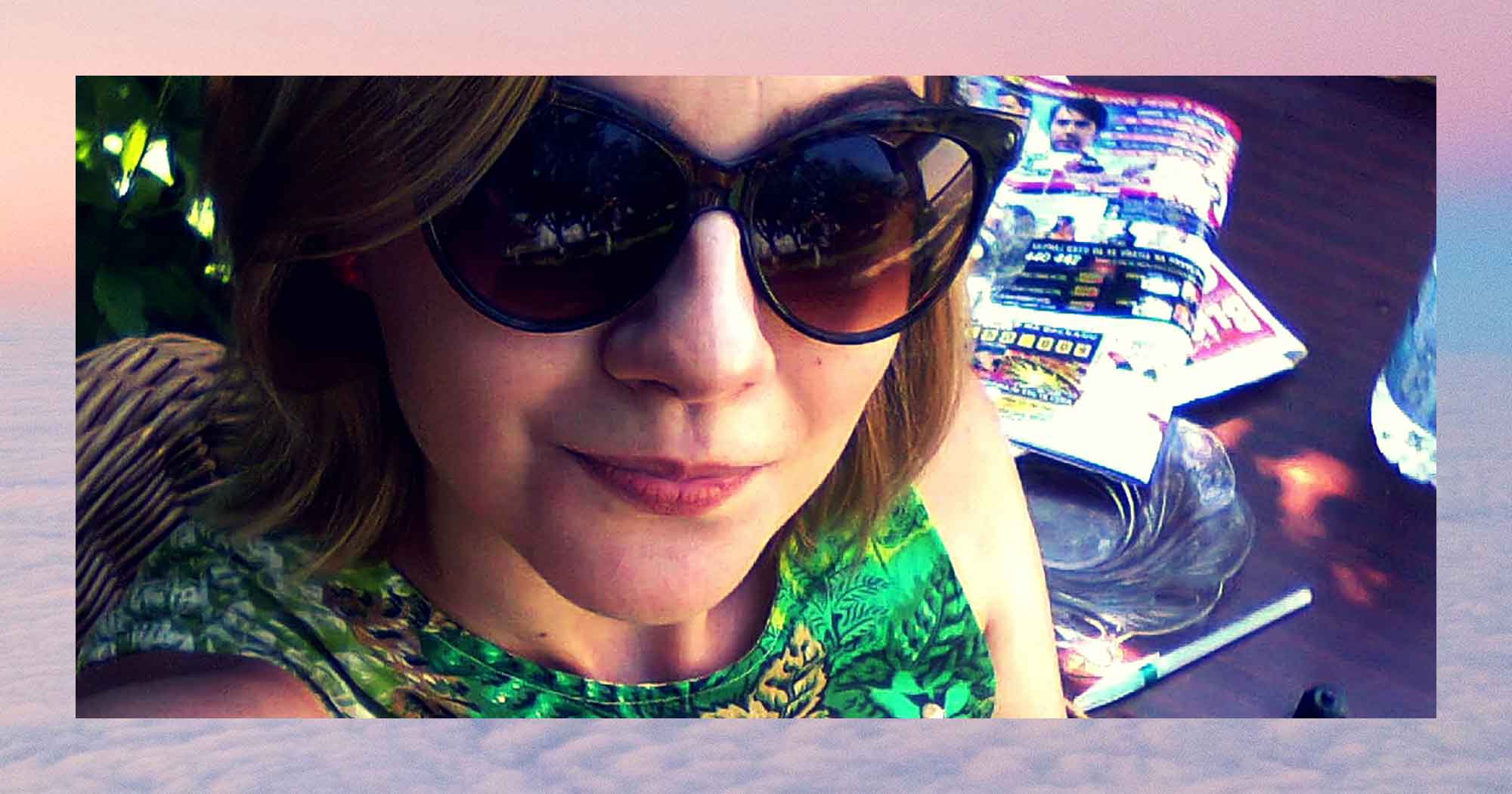 Although I was obviously suffering, I was reluctant to seek professional help mostly because of the stigma associated with mental health. I live in Serbia and in my country, mental health problems are considered taboo. People often hide their pain behind a fake smile because we are taught to grin and bear it. If you decide to seek professional help, you could be labeled as crazy or too sensitive. Weak.  When I finally decided to open up and tell my friends, most of them gave me useless and generic advice.

My personality changed drastically. I became withdrawn, irritable and isolative. I was sitting in my living room when I saw a photo of three-year-old me beaming—I looked so happy. I broke down and realized that I needed help. I thought, You can’t go on like this. What has become of you? Look at yourself! Mom is coming home in ten days and she will need you. You can’t even take care of yourself. You need help.

I called a psychiatrist to make an appointment. I felt like a huge burden was lifted off my shoulders. 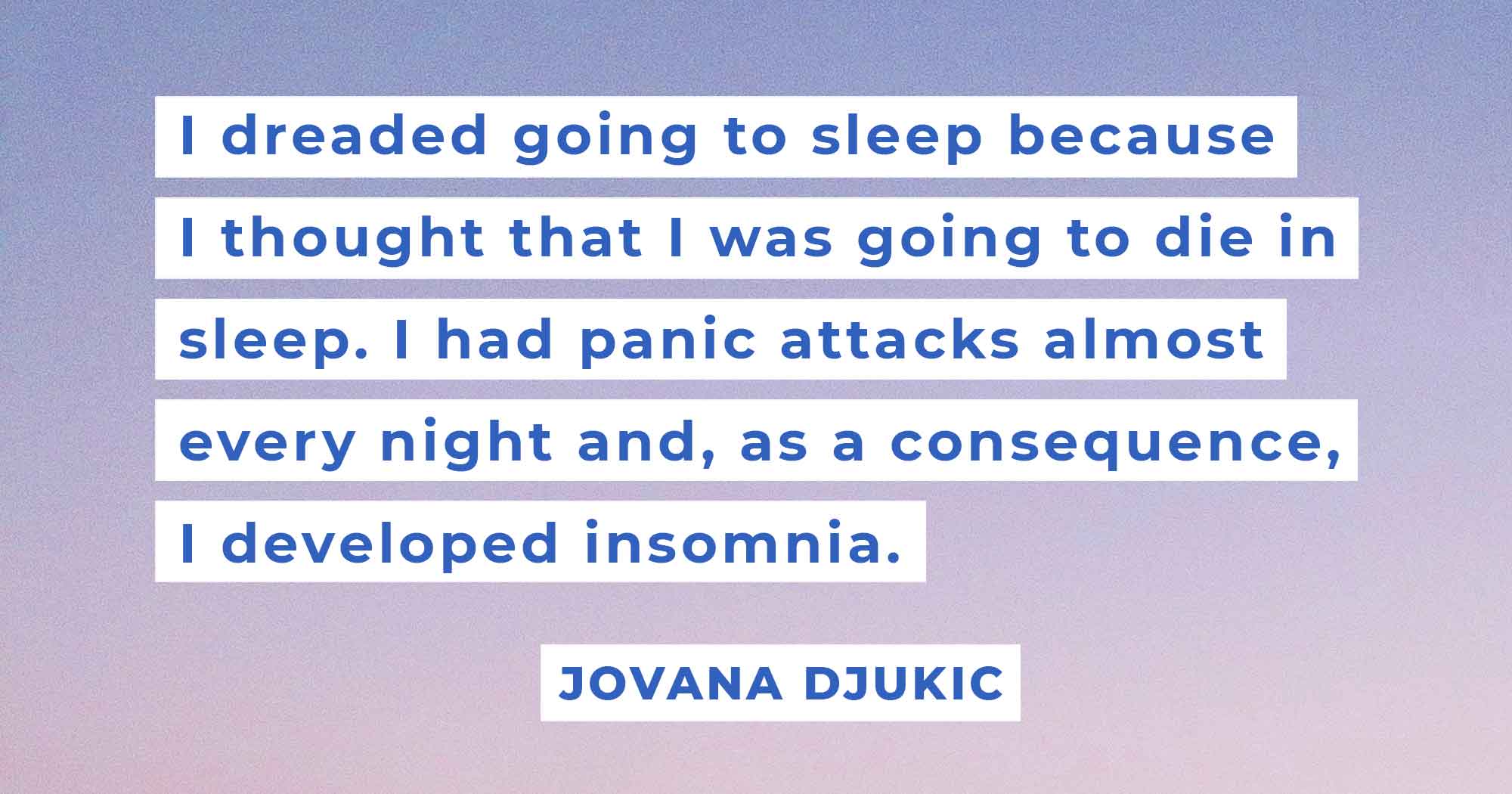 “Hello, sit down please,” directed a friendly voice. She regarded me for a moment. “It’s okay if you’re nervous, there’s no need to feel ashamed. I’m here to help you. I’d like to hear what happened.”

With tears streaming down my face I explained everything. I told her everything about my doubts, insecurities, and fears.

“Listen, I think that you should take this medicine. Your serotonin levels are low, and this medicine will restore them. But it takes time to show its full effect. It can take up to four weeks before you start feeling better.”

I was prescribed benzos and antidepressants. I had my doubts, mostly because I thought that I would get addicted and I’d have to use it for the rest of my life. I bought the meds, and it took me three days to muster up the courage to swallow the pill. The first week was awful. All my symptoms worsened and I was having panic attacks two to three times a day. 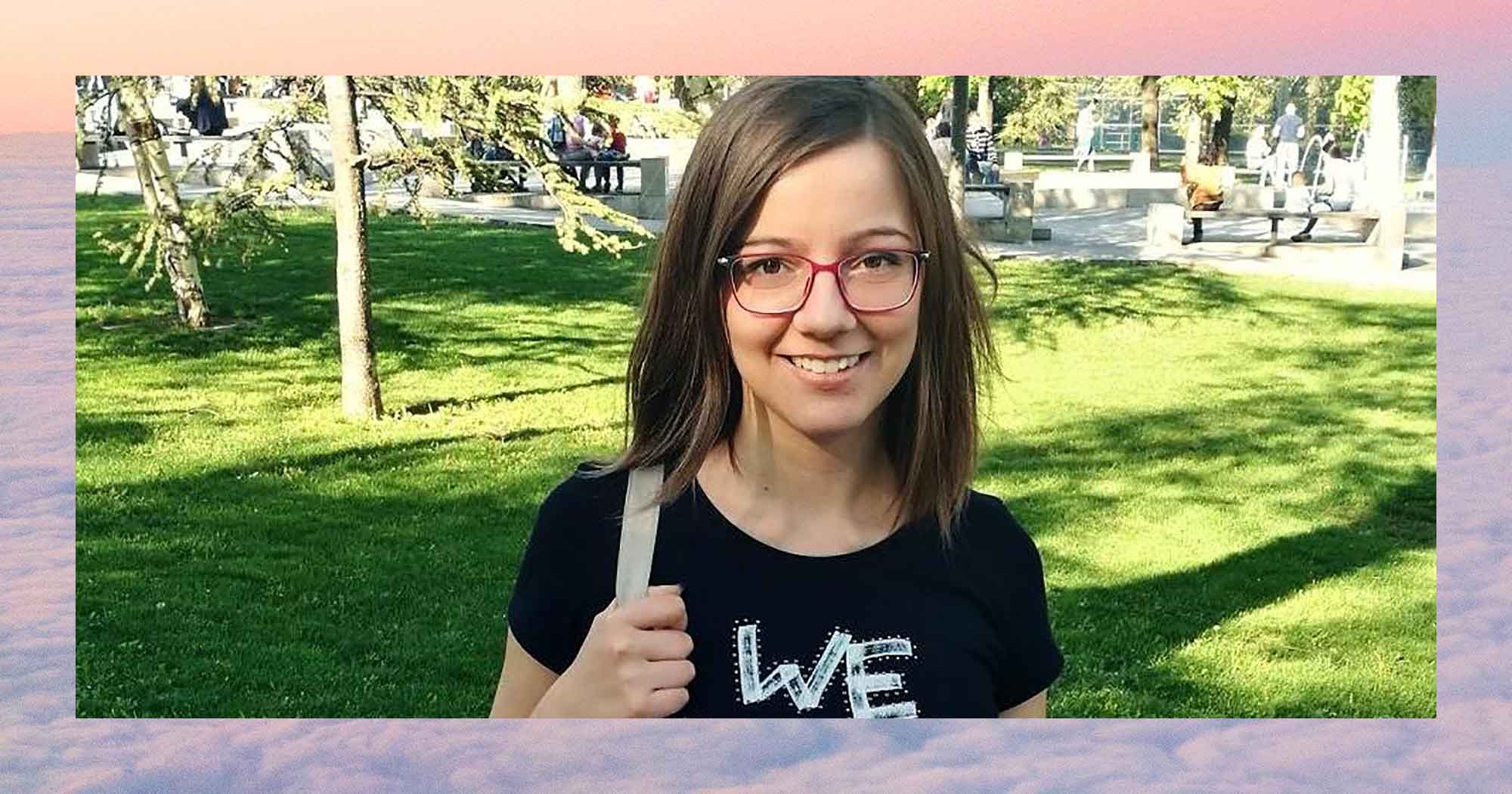 Unfortunately, even after almost two months, there was no progress. I was feeling even worse than before. I felt helpless and defeated. On top of my fiasco with meds, mom came home and I had to look after her. She could barely walk and I had to make sure that she took all the prescribed meds. On top of that, she was diagnosed with diabetes and had to take insulin shots three times a day. I was terrified that I would make a medication mistake and that she would die because of my incompetence. After many sleepless nights, isolation and rumination, I decided to give professionals a second chance. I went back to my psychiatrist and told her: “I don’t want to take the meds anymore. I think I need a psychotherapist.”

She agreed and told me to try CBT (cognitive-behavioral therapy).  I remember my first appointment. I was feeling nervous and jittery and thought about running away just as I was about to enter the psychotherapist’s office. I somehow resisted the urge to run away and that was one of the best decisions I’ve ever made.

I’ve been going to psychotherapy for eight months and I’ve changed a lot. I had my last panic attack five months ago. I didn’t realize that we can, with a lot of work and effort, control some of our thoughts. My therapist helped me identify the unhealthy coping mechanisms and faulty thinking patterns. I thought that constant worrying would prepare me for any misfortune. I neglected my diet and I quit exercising. I was desperately trying to control everything and eventually, I stopped leaving my house in fear that something would happen if I leave my mom unattended. 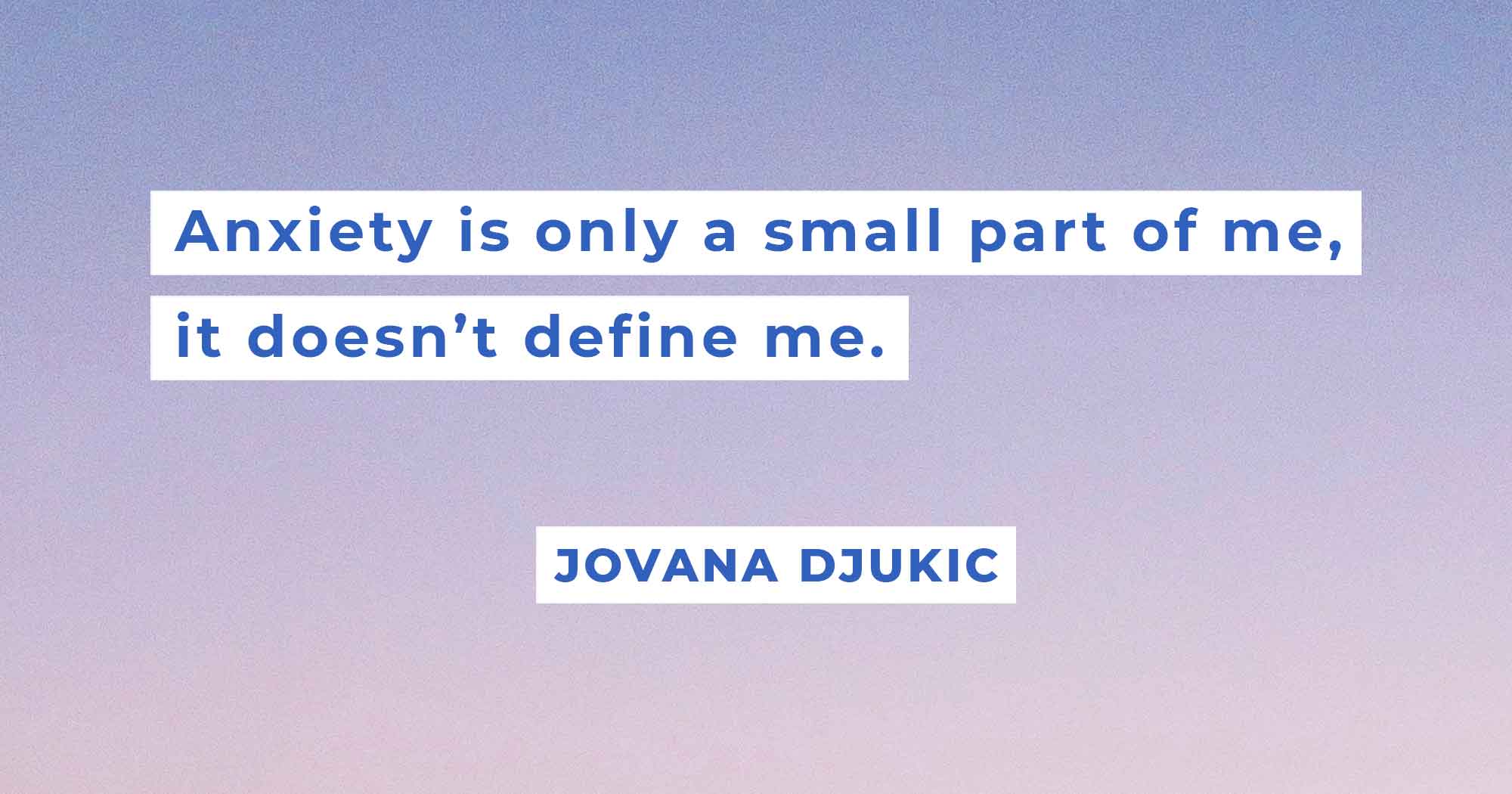 During the psychotherapy, I learned to take better care of myself. I’ve been writing a diary and tracking my mental health ever since. Once you spot and track the unhealthy mechanisms, you can replace them with the more helpful ones. Self-care is also extremely important. No matter how busy I am, I always make sure I have some me time to reflect, relax and recharge my batteries. I exercise five times a week, in the evenings. I spend more time with my friends and loved ones. My mom had to re-learn some things, and now she’s much more independent. I’ve managed to persuade her to take better care of her health and now she can take meds and insulin on her own. This means that I have much more free time for myself. Communication is the key, we just had to learn how to adjust to a new situation and how to work as a team. Everything is much easier and smoother now.

I’m still learning and continually improving myself. The first step to recovery is acceptance. I couldn’t accept my anxiety. I thought that everyone else was smarter, more successful, and tougher. I had convinced myself that I was a weak person and that’s why I have anxiety. That’s a lie. Some of the toughest and kindest persons out there are suffering from anxiety and depression. We live in a cruel world where showing your soft side is seen as weakness. From an early age, you’re taught to put up a brave face even when your whole world is falling apart.

Instead of fighting against anxiety, I’ve learned to accept it and embrace it. Anxiety is only a small part of me, it doesn’t define me. On my bad days, I have to remind myself of my progress and personal growth. Psychotherapy has challenged me to question my rigid attitude and to learn how to adapt and be more flexible. It even made me and mom closer, because we learned how to talk openly and honestly. I’m grateful that she’s still with me and I cherish every moment I get to spend with her. 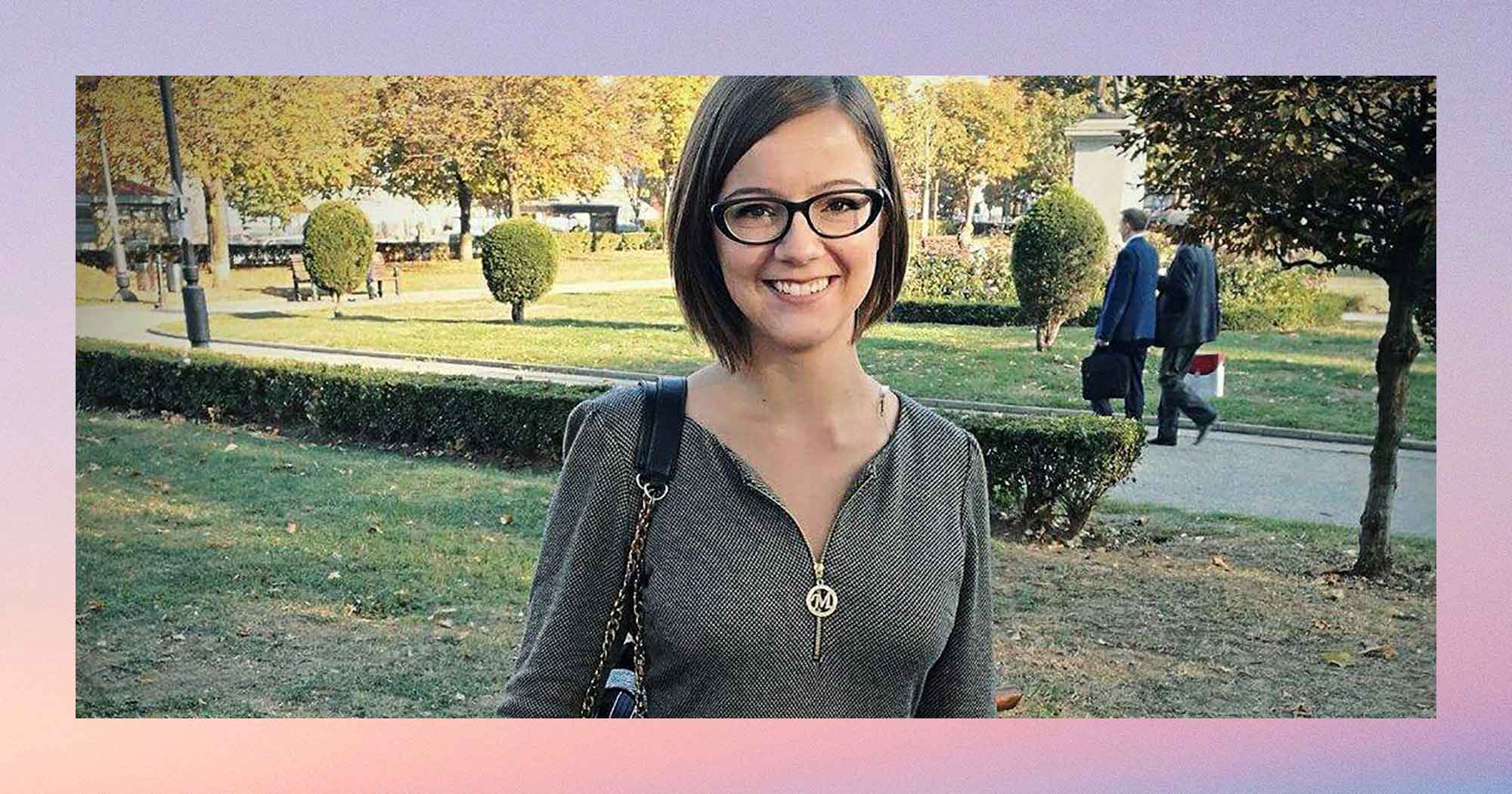 Before therapy, everything was black and white. I used to think that, if something bad happened, I wouldn’t be able to cope with it. Now I think that, when something bad happens, although it won’t be pleasant or easy, I will manage to survive it by accepting it and adapting. Now I know that I’m strong enough to overcome my fears and insecurities.

My road to recovery is rocky and paved with guilt and low self-esteem. On that road, I found a neglected garden full of weeds. I had to pull them out and I found myself in front of a barren field. I had to start from a scratch. I had to decide what I was going to plant. I decided to plant hope and determination. And now I’m watching them grow and turn into beautiful blossom. Sometimes weeds of self-doubt and guilt sprout and threaten to destroy my lively garden. But this time I’m the gardener and I’m in charge. And I won’t let them tear down my hard work.

Jovana is a philologist and a writer living in Serbia. She is an avid gym-goer and she likes to write about health and nutrition. Nothing makes her happier than seeing others thrive. When she is not writing, she likes to read. Her favorite genres are fantasy and horror. The phrase which describes her best is a quote from her favorite fairytale, Alice's Adventures in Wonderland: “Curiouser and curiouser!” You may read some of her sports articles here.

I don’t know if I will ever be free of the panic attacks but I have hope that I will know how to cope. As of right now, I am taking things one day at a time, living my life and sharing my story so that others know that they are not alone.