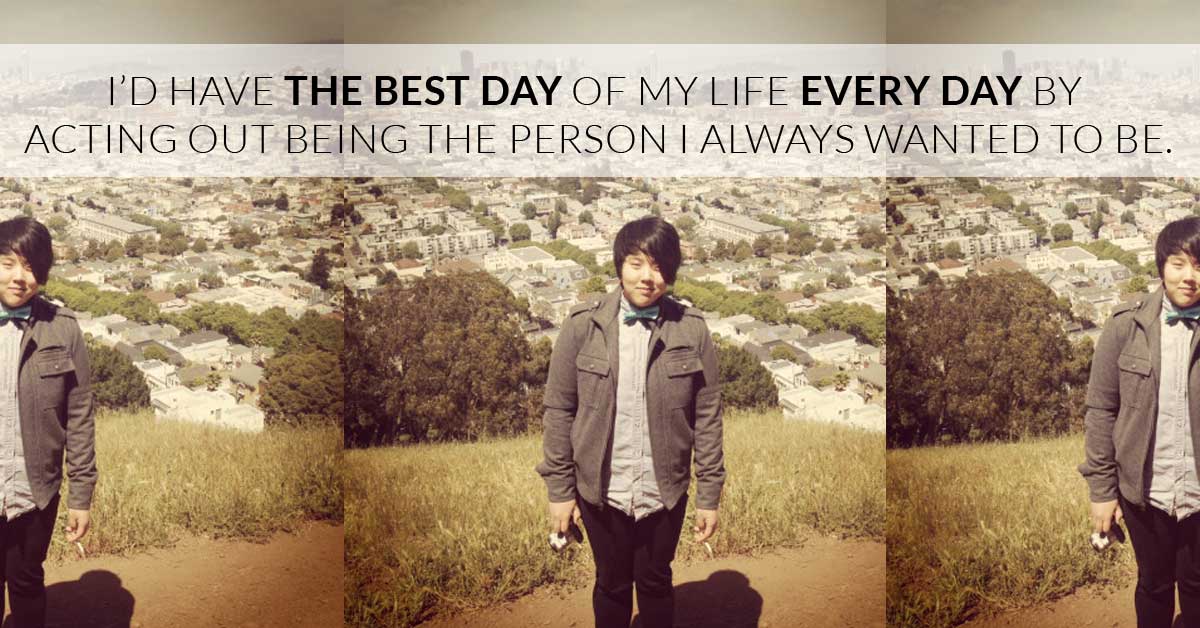 I spent the first 25 years of my life in a world seemingly devoid of any hope.

I knew I was gay since I was 4 years old. Growing up in a conservative Korean household made me spiral into depression at a young age. I felt like a boy trapped in a girl’s body.

I was so scared of letting that secret out that I went selectively mute. I stopped talking at school and home. I would go weeks without uttering a single word to anyone. I would only speak to my parents if I needed anything.

I was depressed and lonely. So much so that when I was eight years old, I made a promise to myself that I would commit suicide once I graduated from college. (I don’t know why my 8-year-old self chose to commit suicide after college, but I think my parents instilled the idea of college as a “rite of passage” as vital to human existence as breathing. I guess I wanted to see what all the hoopla was about.)

As an Asian American kid growing up in the United States, it was hard to feel like I truly belonged anywhere. I went to school surrounded by kids with their delightful American sack lunches of sandwiches and cookies, while my lunch of black bean noodles and picked daikon smelled up the air with the stench of otherness. I never looked like the version of an all-American kid in advertisements. I didn’t adhere to American cultural norms. My parents are first generation immigrants, and I was mostly influenced by their culture and was raised the same way they were in their home country. This was hard as a child — I assumed that my classmates went home to “Full House”-like environments with Danny Tanners for dads, when I went home to an empty house because my parents were, like many immigrants, working 12-hour-workdays. And when I went to my parents’ homeland, my accent made the natives treat me like a tourist who didn’t belong.

Growing up Asian-American was difficult in and of itself, but when faced with the intersection of being queer and Asian, childhood became an even tougher road to navigate. The end destination was depression. 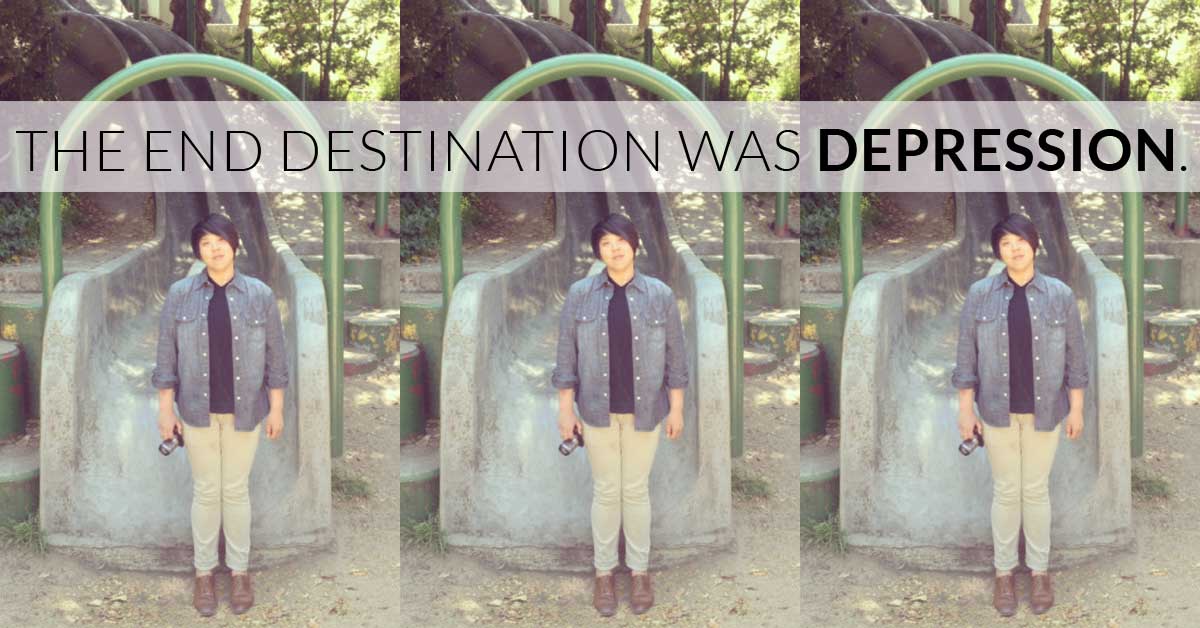 Korean culture doesn’t foster the creative spirit of a child, but instead tries to get everyone to conform to one idea of perfection, with monetary success being the ultimate goal. My parents grew up during a time of rebuilding in a war-torn country. There wasn’t much to go around — new culinary inventions of the time often featured SPAM or any other canned ration the U.S. government brought over. They always cut corners by habit, even when bank accounts were full.

Money didn’t mean anything to me. I grew up in relative financial comfort because my family worked hard. I craved a more romantic view of life. In fact, I was miserable because the luxurious cars and vast houses my parents worked so hard to achieve made me feel empty inside. I didn’t understand the point of working so hard when you ended up being too tired or too busy to enjoy any of it. 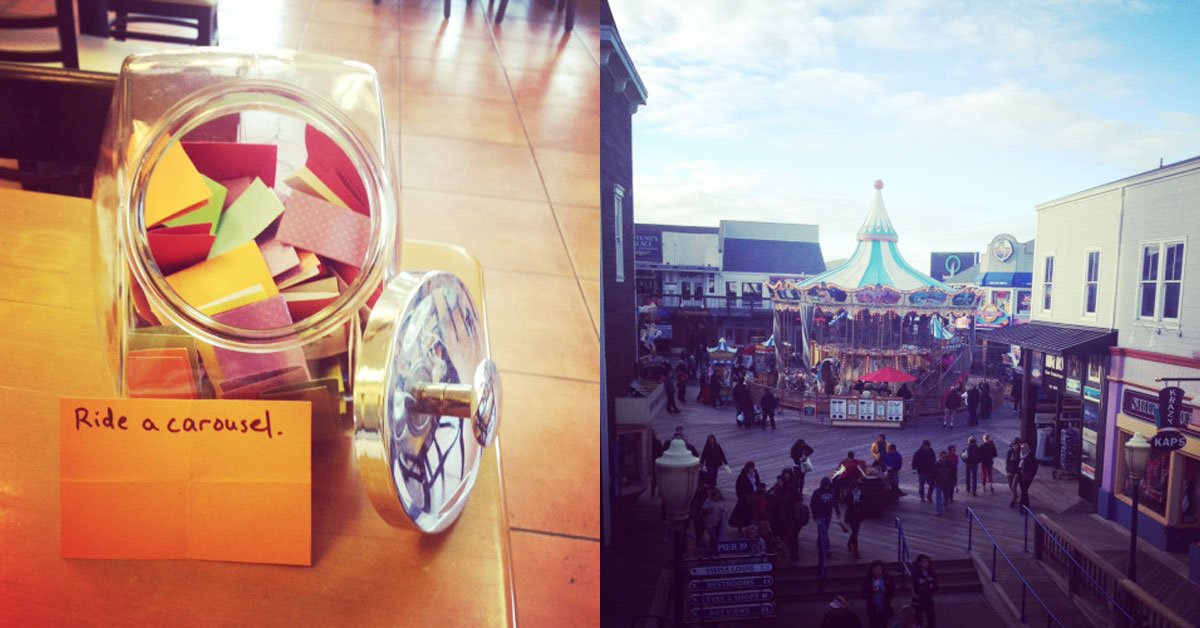 I didn’t have friends in high school. I read instead. By chance, I became interested in poker. I got a chance to test out my skills when I went to school at UCSD. I spent my college years gambling and paying my way through school. It’s weird to think I spent so much of my formative years surrounded by degenerate gamblers with out any self-control. Don’t get me wrong — poker is a skill game and legitimate profession — but anyone who chooses it is a glutton for punishment. The ups and downs you can feel in one session of poker is more than a normal person faces in a lifetime. You need to be able to enjoy the lows as much as the highs, because in the end, it’s pretty much all the same thing. It can’t faze you that you lose large amounts of money in minutes — more than some people earn over a couple months. I’ve lost $10,000 in a night more nights than I can count. Luckily, I had many winning nights as well. You roll with the punches, but it makes someone unstable if they suffer so many ups and downs in life. I craved a life of stability.

My parents always thought the key to a happy life was having the best money could afford, but there I was winning and losing small fortunes every time I played poker. 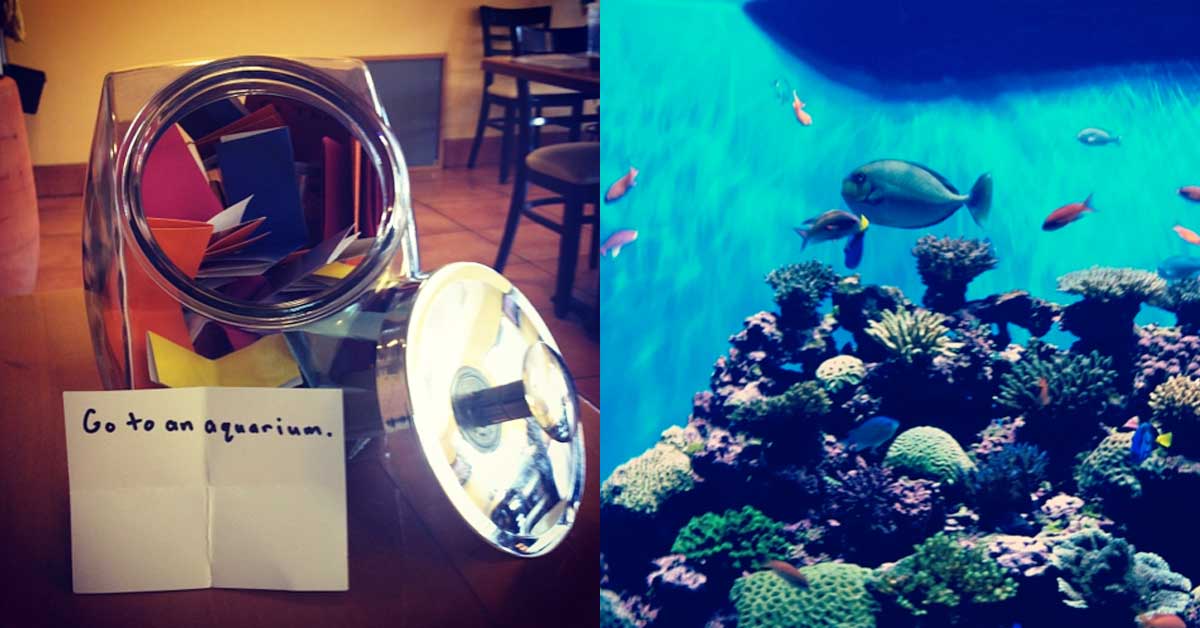 I so wanted a life full of experiences and meaning, but it wasn’t there. I became more and more depressed. I had reached a point where I was living comfortably off of poker, but my depressed 19-year-old self found that fact the most depressing. If having monetary success was the point of life, I had reached it and wanted to kill myself anyway. I yearned for human connection and outdoor experiences filled with fresh air, rather than the stale, air-conditioned casino variety.

Being sober and sad was getting boring, so I started to rely on substances for another state of being. Cocaine allowed me to spend three days straight playing poker. Then I would sleep for a day and repeat the ghastly cycle. I was living in an apartment full of trash. I had no motivation to stay home and clean, I was too busy trying to distract myself from inconvenient thoughts. My psyche was taking mental beatings from the ups and downs of playing poker while the substances I had introduced into my system were affecting the chemical balance of my brain.

Enough was enough. I decided to kill myself.

On what I planned would be my final day, I took a sip of the last shot of whiskey I poured. I looked at the concoction of pills I had amassed (I had diligently Googled the deadly combination). I was ready, but I suddenly thought of past events: my childhood, past heartaches and broken promises. I tried to think of the best day of my life, but my brain drew a blank. 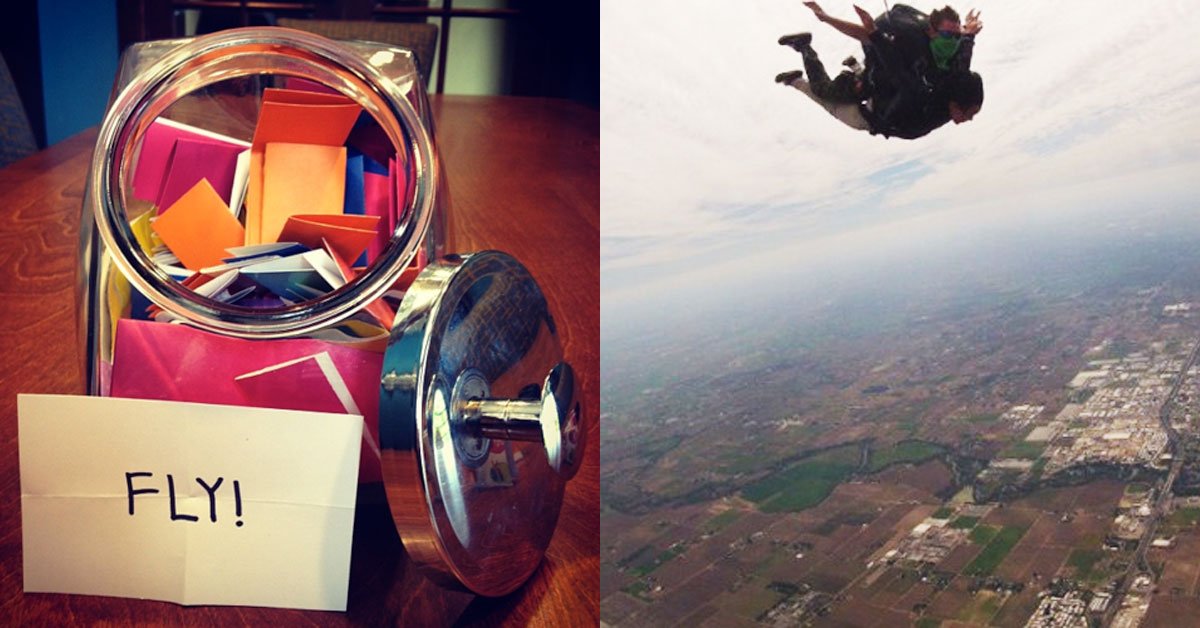 I decided to live out one last day to be the best day of my life. At least I owed that to myself. I didn’t do anything special in particular. I decided to do some classic San Franciscan activities that I once thought I was “too cool” for, as I had lived my whole life in the city. I rode a cable car. I ate some salt water taffy at Pier 39. I enjoyed the sky for one last time. I sat on a bench near the water and looked up. The sky was menacingly beautiful. I couldn’t tell whether it was a particularly beautiful sky that day or it was the first time I took a moment to appreciate how beautiful the sky could be.

The bench next to me had the words scribbled on it. I looked closer. “There’s beauty in everything, it’s up to you to see it.”

I realized the sky had always been beautiful, but it was the first time I allowed myself to see it. I was too caught up in the sad thoughts in my head. I had never had a clear moment to truly appreciate a sky. I truly had the best day of my life because I went into the day treating it as if it would be. I wanted to try and change the way I approached all of my days, by making every single day the best day of my life. 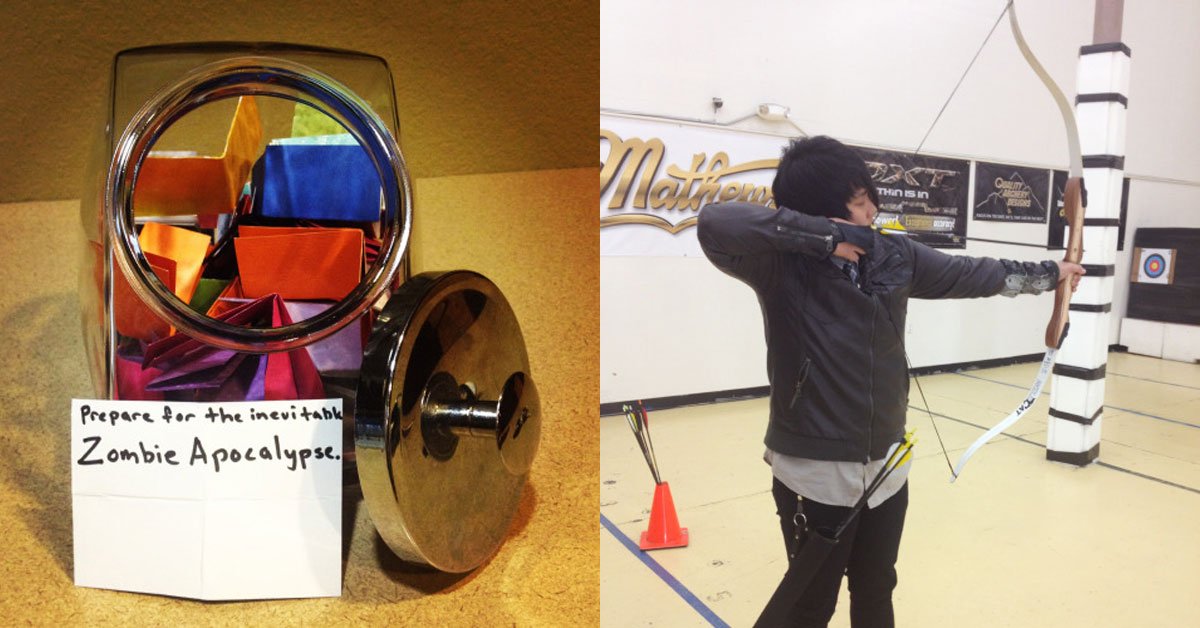 I read somewhere that if you do something for one hundred days, it becomes habit. There’s probably no scientific backing to that, but I chose to believe it in order to change my life. Besides, I had nothing to lose. It’s amazing just how much a little hope instilled in a person can do. I decided to change all my actions to mirror the person I always wanted to be. I decided to create a project for myself where I’d have the best day of my life every day, by acting out being the person I always wanted to be for one hundred days.

Here’s a little bit of psychology behind my decision to change (it’s really about actions, and the way we control them). “Volition” is the scientific term for what is basically “willpower.” When a person makes up their mind to do something, that is called “immanent volition.” “Predominant volition” is when you naturally turn to carry out that action because that’s what you’ve always done — out of habit, without thinking about the action. When we put through any particular act of choice, that is called “emanant volition.” 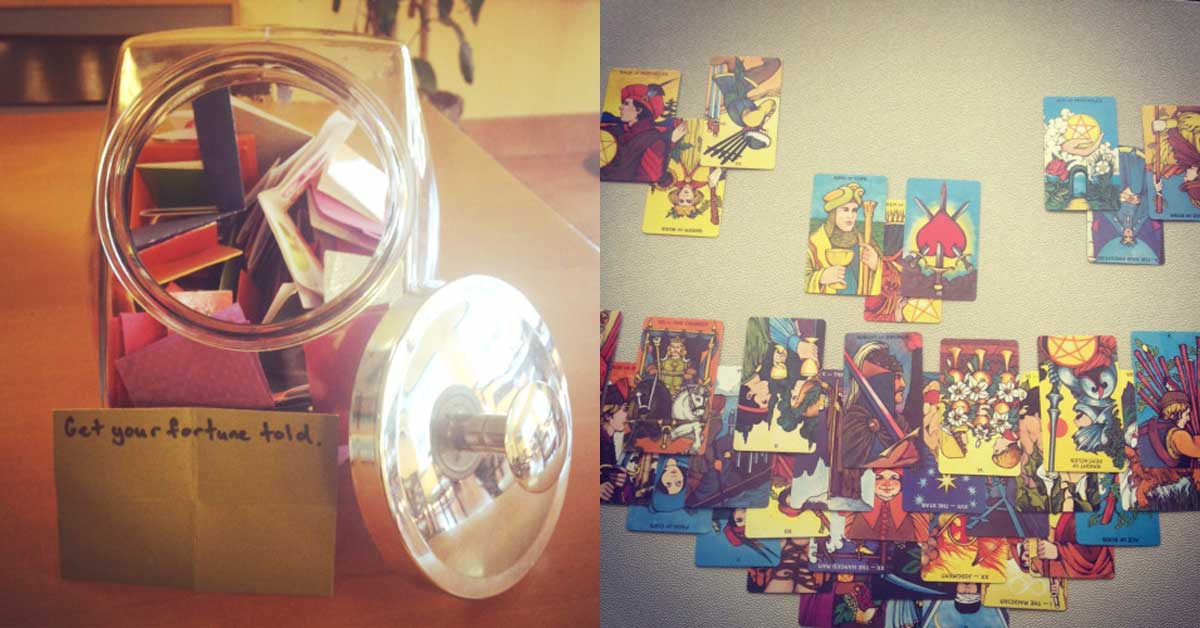 My decision to change my life was based on a reassessment of my predominant volition. I just took an extra second to think about what I was about to do.

Right before I carried out an action, I would ask myself if I were carrying out that action because I believe it would be the best course or was it because I’ve always acted that way? Most often, it was the latter. I took a split second to choose what kind of person I wanted to be, instead of letting my predominant volition control my behavior.

By doing this, I forced myself to do something I was scared of every day, and the Best Day Project was born. After one hundred days of this project, I lost sixty pounds, gained best friends and a new perspective on life. Most importantly, every single day was the best day of my life.

I decided to tackle all my fears head-on by showcasing my misadventures in a webseries called Best Day Project. For my webseries, I wrote out all the things I’ve always wanted to do and put them in a jar. I pulled out one piece of paper at a time, and forced myself to do the activity while filming the whole process.

I don’t know what works for others when it comes to dealing with depression. I will never even attempt to guess. What worked for me, however, was injecting hope for a brighter future into all of my decisions. And while I never want to tell anyone how to live their life, my project may give someone in trouble pause for thought. Perhaps seeing someone who never thought they could get better tackle their fears every week, a seed could be planted in someone’s mind that might lead them to want to take a similar path one day.

I still struggle with negative thoughts and the possibility of my depression sending me into a backwards spiral, but I try to fight my way out of those funks by not completely giving up hope. I definitely don’t have it figured out. But as long as I don’t completely stop trying, I realize I’m okay. Half the fun is the struggle to the destination. If you get there too early, you don’t appreciate it. 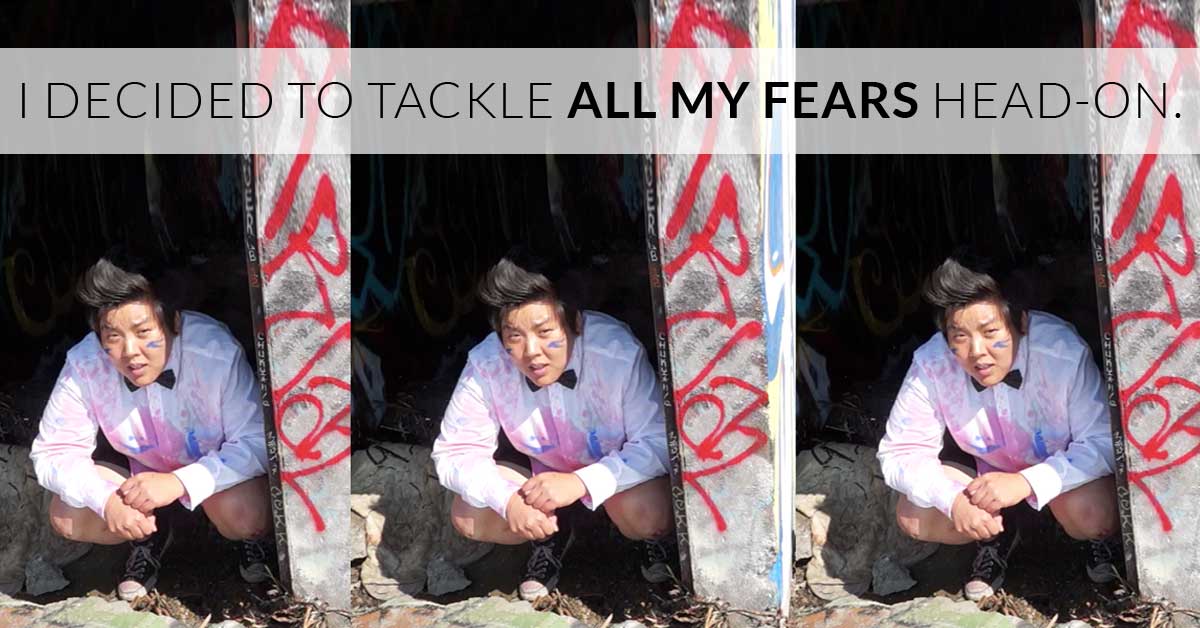 Grace graduated from the University of California San Diego with a double major in Political Science and Bioengineering. She played poker professionally during that time which allowed her to travel to tournaments all over the world. Soon after graduation, she started her own new media marketing startup, BestDayProject.com, which focuses on producing LGBT Youth Suicide Prevention content. Through sharing her stories and videos, she hopes to empower others to find their own path and happiness in the world.

I Still Lose Myself

I hurt so much. I didn’t understand how to take care of my body. I didn’t know that I was sick with Bipolar II and a major anxiety disorder.