The Pain of Being Labeled Crazy by Mike Hedrick

The Pain of Being Labeled Crazy 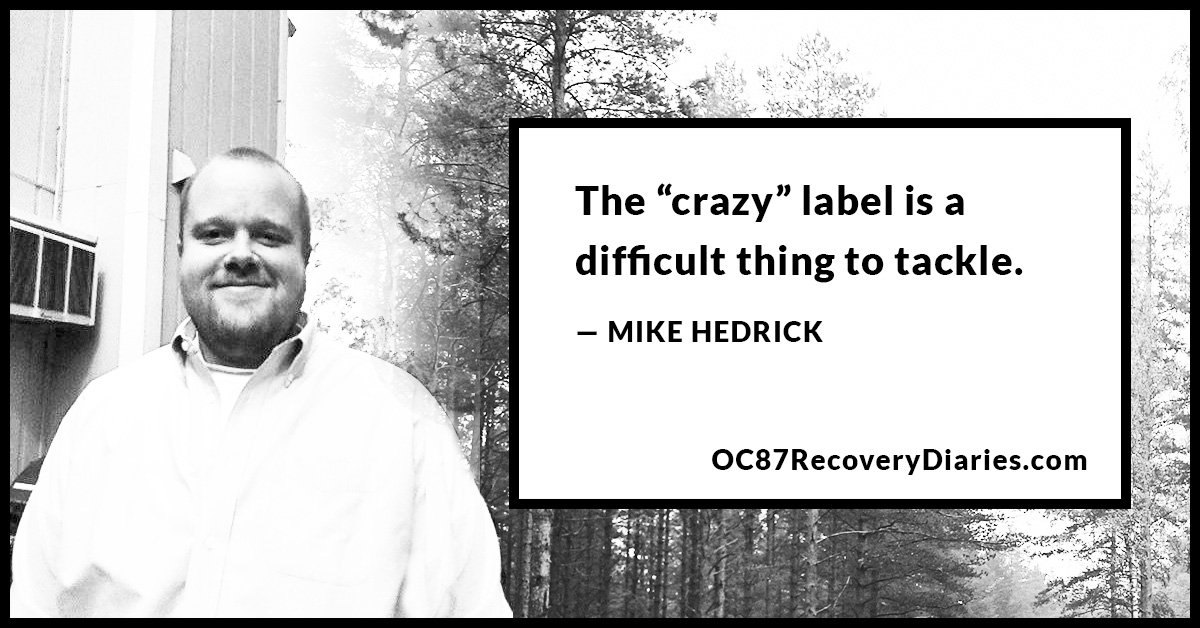 I’ll be honest: it hurts to be called “crazy.”

In living with mental illness there are always certain things you have to deal with, from ongoing symptoms to anxiety to the numerous side effects that come hand in hand with many of the medications out there. It could be argued, though, that the label “crazy” is among the hardest to deal with.

First there’s the shock of the initial diagnosis. Then there’s the slow, gradual acceptance that this new, medical label is now part of you, and then finally there’s the stigma of the slang label and the complications that arise from disclosing your illness. Overall the “crazy” label is a difficult thing to tackle.

There are so many ways the label can affect you that it’s pretty easy to see why a lot of people have a hard time accepting that they’re ill. It can cut you deep to face the inevitable fear that some people have of the word “schizophrenia” but it can also give you incredible insight into the way people work and how they perceive the world. It can free you from constraints about social vulnerability and it can be a great way to weed out the people who remain ignorant.

I can remember being in the hospital, three or four days deep, unable to sleep, staying in my room for hours at a time as I wrestled with the voices in my head and pleaded with them to go away. The mental hospital is likely the most inopportune time for the voices but no matter how much you plead they are still there veering you into rabbit holes, paranoia and the delusions that seemed all too frequent and convenient. I was beat up, still trying to recover from a “mission” to the East Coast under the delusion that I was a prophet.

What I really wanted was to just go home, more than anything, I pleaded with the nurses and my parents and anybody that would listen to just please let me go home. The psychiatrist would come every two days to talk with the patients and I sat there, desperately trying to appear normal, she told me with a steely look that I had schizophrenia and that it was a lifelong chronic illness.

I didn’t want to believe it at first but that afternoon they sat me down in the visiting room with my parents and they put on an instructional video about schizophrenia, it covered the voices, it covered the connections, it covered the delusions and the ways it can manifest. That video gave me words for the thoughts that were going through my head, I still didn’t want to believe it and a part of me was still convinced that the whole psych ward was an elaborate set-up by the government to unseat me from my post as a prophet.

I can remember the sting of it though, the slowly ambling realization that I was, in fact, insane. It made sense — no matter how much I wanted to push it away. That night, my brother called from Maryland and asked me how I was doing. “Not good,” I said, breaking into tears. 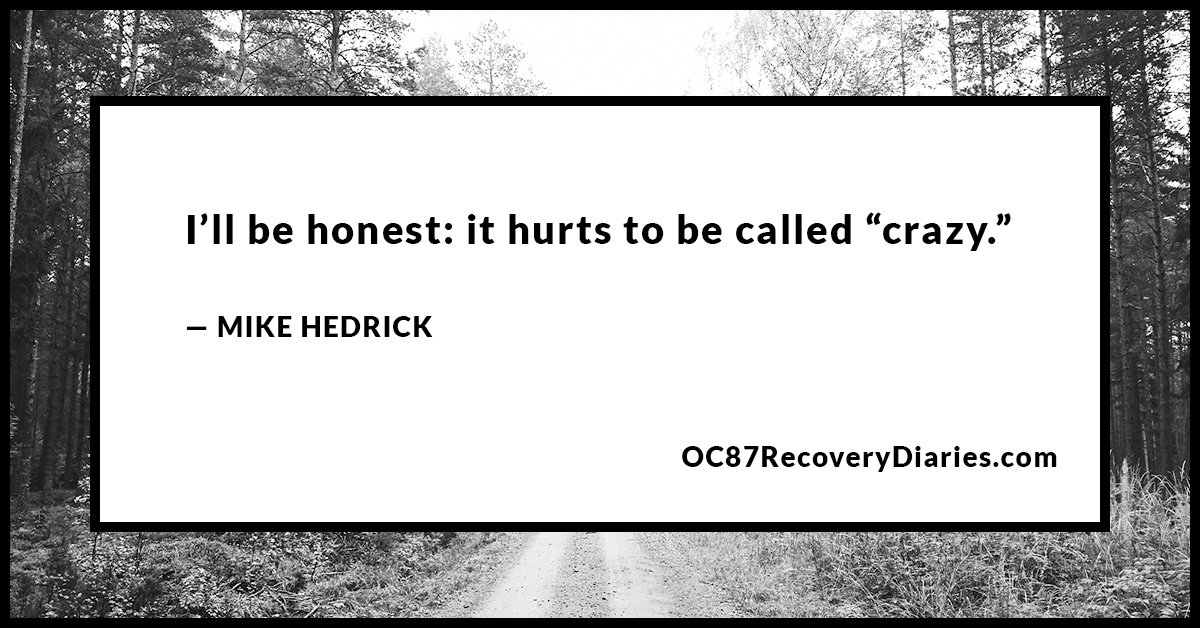 Over the next few weeks I was lost. Side effects from the meds were making me so restless I would walk for hours on the treadmill at my parents’ house or around the neighborhoods looking for signs that my mission had been real. I’d follow colors, cars — anything that had the loosest connection to some facet of my delusions. During my first few visits to my psychiatrist, I was convinced that his office was staged and that there were microphones recording me so I was careful with what I said. The weeks went slow as I cycled through different meds and finally I started to feel better, the psychosis waned and I realized that the connections and the voices were going away.

During that time, though, I had no idea what to do with myself, I was struggling to come to terms with this huge debilitating thing and I floundered. My days were spent reading, watching TV and smoking cigarettes and going for long walks. My parents would take me to town sometimes and I’d wait in the car because I was too afraid to talk to anybody.

Slowly the months passed and I began to learn what staying in control of my thoughts meant. There were weekly appointments with my psychiatrist and piles of books bought on mental illness and schizophrenia. My parents were at a loss, too, not knowing what the hell had happened with their son. I got antsy again finally convincing them to let me get a cheap apartment in town. I was still lost and my friends had all but disappeared.

Somewhere in there I decided to write what I was feeling down and that act alone was transformative. I would rant and rave in numerous notebooks until I had filled them up and by the time a year had passed I decided I should write a book about my trip. That writing helped me learn about my thoughts and the things that still recur. I was still hurt inside, and though the initial pain of being diagnosed had worn off I had to contend with the numerous stand-bys of paranoia, delusional thinking and touches of impulse where I’d lose control of my behavior. I did get better, day after day, month after month and year after year. 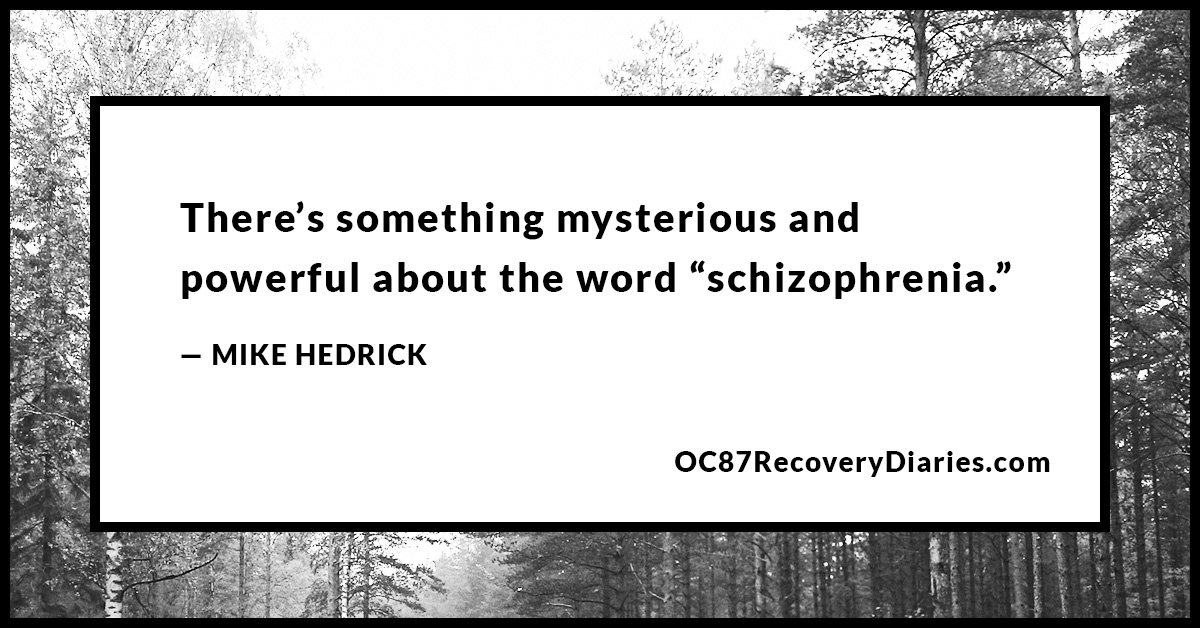 Today it’s nowhere near as bad as it was — thanks to my continued med regimen, self care, self work and therapy. There are still things I have to worry about. I can’t stress myself out because I know it leads to psychosis and I’ll start to think about things that have no basis in reality. I recognize it, and I adjust.

I fully embrace the diagnosis and the label, despite the associated negativity and stigma. This is especially apparent when I meet new people and they ask what I do. After I tell them, there’s either a look of disgust or sympathy and I have a hard time knowing what to do next. Usually I make a joke or try to reassure them somehow, but, inevitably these people will launch into stories about family members or friends that have mental illness.

Although it’s a great equalizer, oftentimes I have no idea what to say. Everybody’s experience is different and I’ve worked my butt off to recover. I worry that I don’t seem sympathetic enough but it’s awkward for me when someone I’ve met ten minutes ago is telling me about their late uncle’s suicide. It’s especially hard on dates. There will be the inevitable trip to the bathroom once I tell them and if they come back they won’t know what to say.

There’s an incredible amount of stigma surrounding mental illness, thanks to the media’s portrayal of people with mental health diagnoses as being dangerous and unstable people and that’s something I will probably always have to contend with, especially outside my circle of friends and family who insulate me. I write about it, and I write openly and honestly and I write what I know. 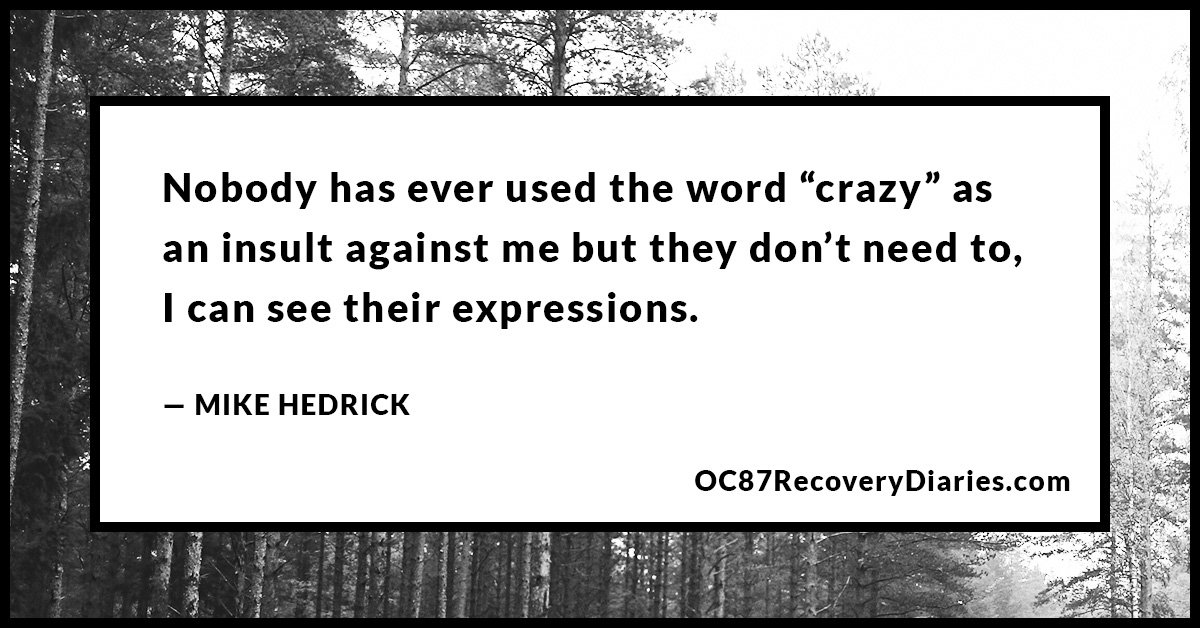 There’s so much pain when you’re living with a mental illness, either from inside yourself or from the rejection you feel from the world, but it gives you a character, a strength and a sense of self that is hard to find in most people.

The pain of being labeled crazy doesn’t present itself as one big sweeping hurt, more like a series of small little jabs as you go through your days trying desperately to maintain some sense of control on not just yourself but the world around you.

You’ve probably heard the term “micro-aggressions” when discussing racial or gender politics and the same thing occurs in regards to living with a mental illness. Sometimes it’s a small look of disgust on someone’s face or a halt in conversation, a lot of times it comes in pity that I don’t need and didn’t ask for. I can recall a moment sitting in a bar, a friend was getting ready to play her guitar and I was sitting there with one of my books that she wanted to read. A woman sitting next to me asked what the book was about and it was hard at that moment not to disclose my illness simply for the fact of telling her about the book. The moment I told her she sneered and excused herself to another corner of the bar.

In other instances, I have been on dates where, when the topic came up, there’s a narrowing of the women’s eyes and they excuse themselves to the restroom, one woman even asked if I had ever killed anybody. I learned pretty quickly to skirt and side-step the disclosure when I’m meeting someone new, eventually it will come up and I’ll disclose but until that point I want to at least give the impression that I’m a human being.

There’s something mysterious and powerful about the word schizophrenia that affects people on a visceral level, maybe because they see that it could happen to anybody, maybe even themselves and maybe because, due to media perpetuation, it connotes images of basal animal wildness and a loss of control and stability, something which people grasp desperately onto.

Nobody has ever used the word “crazy” as an insult against me but they don’t need to, I can see their expressions. 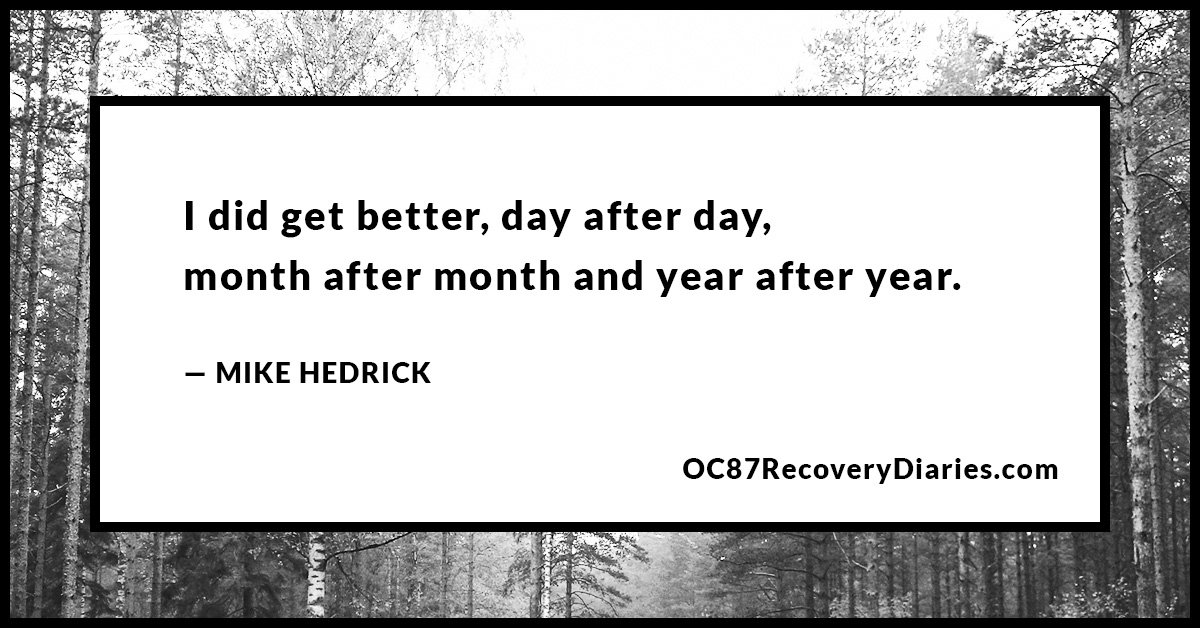 Thankfully, as more people speak out about their anxiety or depression, the stigma lessens and people become more accustomed to it. A lot of people have challenges that they don’t know how to deal with. I’ve met a lot of other people with mental illness and the consensus seems to be that, though the symptoms ease, or we get used to them, the label is everlasting. It’s a definition that tells people and that tells us what we should be like and though that label and the illness will never go away we can choose to get better at being “normal.” That’s the path I’ve taken at least and you wouldn’t have any idea that I have an illness if I didn’t tell you.

I’m skilled with dealing with it because I practice every single day of my life, in every interaction I have and in every instance I find myself. If it isn’t the social aspect it’s the conventions of being a “normal” person, having “normal” thoughts and recognizing when the things that are happening in your head are too far off from reality. It’s been a journey and I’m still learning. I imagine, in another ten years, I’ll have it all down pat but I might regress and that’s something that I worry about too. Overall: I know I’ll be ok.

Mike Veny is an advocate who speaks boldly about his journey with mental health. Mike Veny is also a lifesaver. The first life he saved was his own.