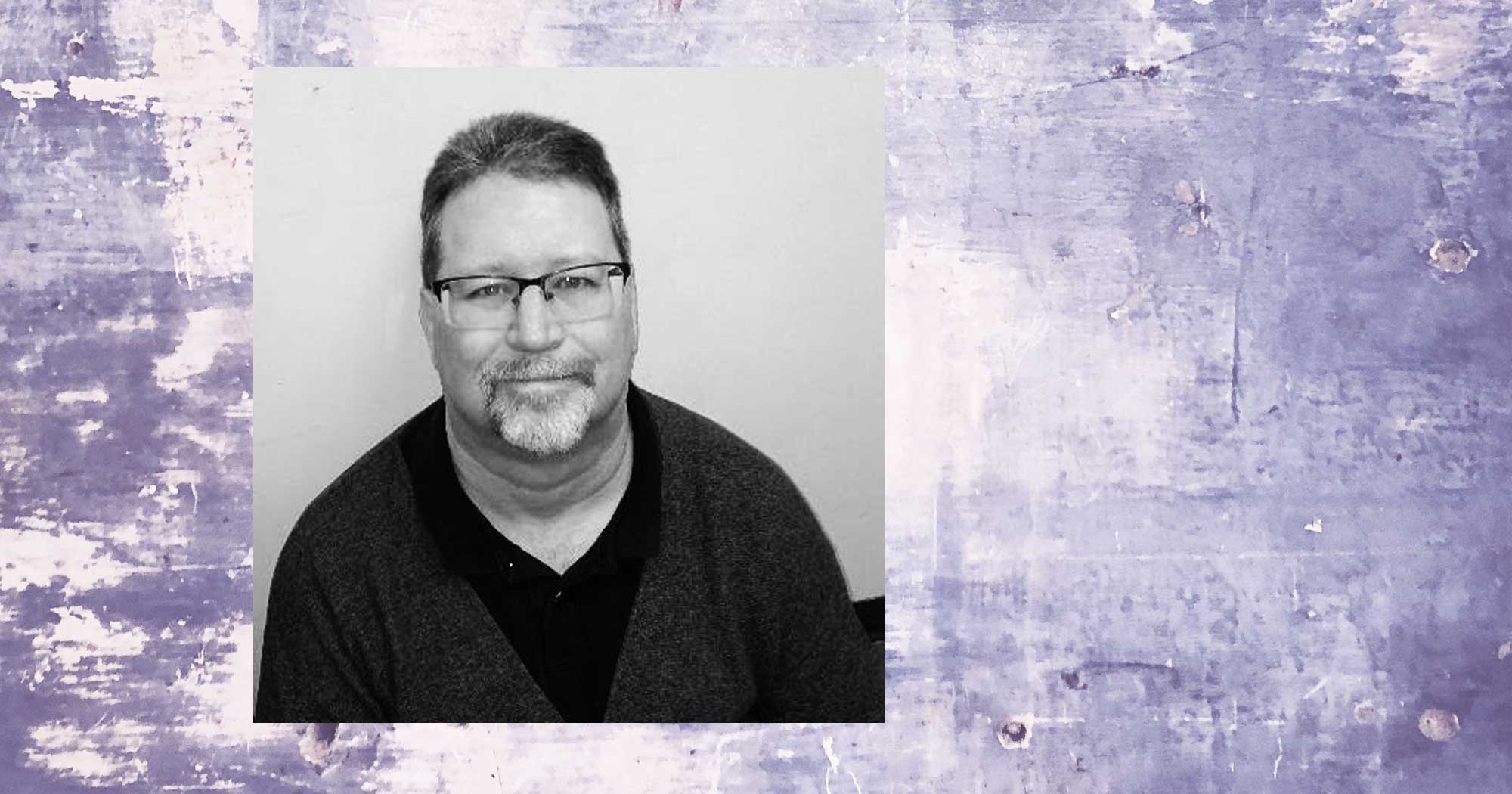 Ten inches.  Ten inches was approximately how far the knife tip was to my chest. Truthfully, I am not prone to self harm. I do not want to lie or exaggerate my sufferings, but I was seriously considering suicide. The year was 1985. I was a student at my college. I was 18. My latest grades contained two Fs and I was worried my dreams of being a music teacher were finished. My dorm roommate had just tried to beat me up the previous night because I asked him to be quiet at 2:30 am. I had no friends and no girlfriend, but I did have a deer skinning knife, and I wanted to quit life.

I went to the Psychological Services on campus and asked to talk to somebody. That was a mistake. The counselor advised me that I needed friends, so I should go drinking with the guys. Let me rephrase that—the counselor advised me, an underage young man, to break the laws of the State of Indiana and consume alcoholic beverages. This was a bad idea. Compulsive behavior is prevalent in my family, so turning to alcohol could have turned me into an alcoholic. For that reason, I have kept alcohol, smoking, drugs, and gambling at arm’s length. Also going out drinking with the attacking roommate and his friends seemed like a bad idea. Poisonous food is worse than going hungry, and in my case, psychological counseling at my university was poison. I needed to find my own path and my own answers. 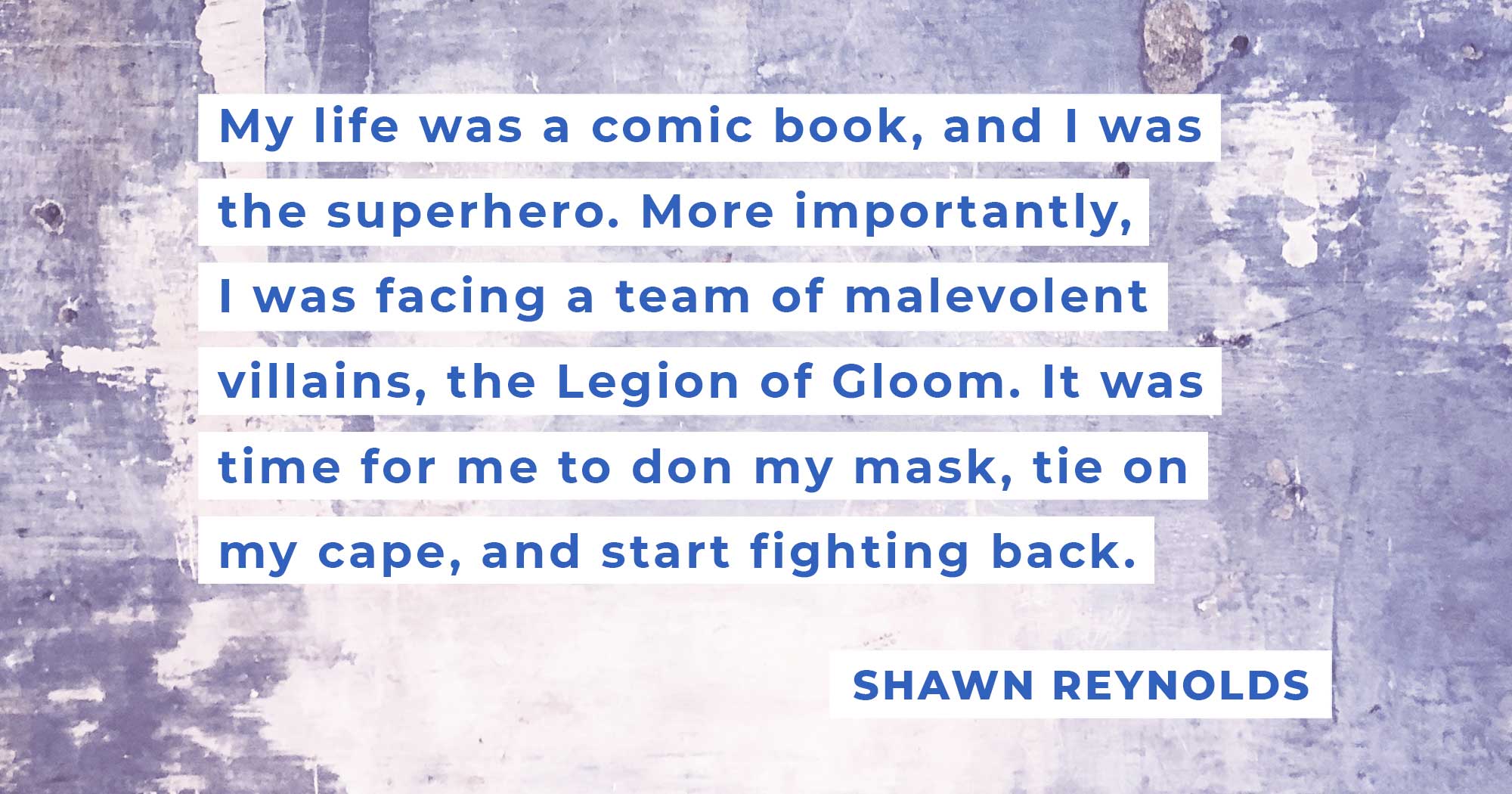 As a kid, I loved comic book superheros. Thinking about Spiderman and Batman, I thought of how many times they had to face adversity alone. I too felt alone. Suddenly, it dawned on me. My life was a comic book, and I was the superhero. More importantly, I was facing a team of malevolent villains, the Legion of Gloom. It was time for me to don my mask, tie on my cape, and start fighting back.

Finding the Legion of Gloom was easy. All villains rent the same hideout; an abandoned warehouse with the floors oddly tilted. I entered the warehouse through an upper window, and came face to face with a member of the Legion, the Limiter. “You will never have friends!” he yelled. “Nobody in your tiny hometown likes you and nobody on your dorm floor likes you.” Typical. He is called the Limiter because he tries to limit your options or choices. In this case, he tried to limit the number of people I could be friends with. I answered in a snarl, “You forget, Limiter, there are six billion people on this planet. I will eventually meet someone who will be my friend.” The fight was on, but surprisingly brief. I summoned courage to join a club or two to meet new people, and within a week or two, I had met some guys in other dorms. We had shared interests besides the club, and developed the friendships I needed. One of them was the best man at my wedding. You can always beat the Limiter. You just have to find more options. 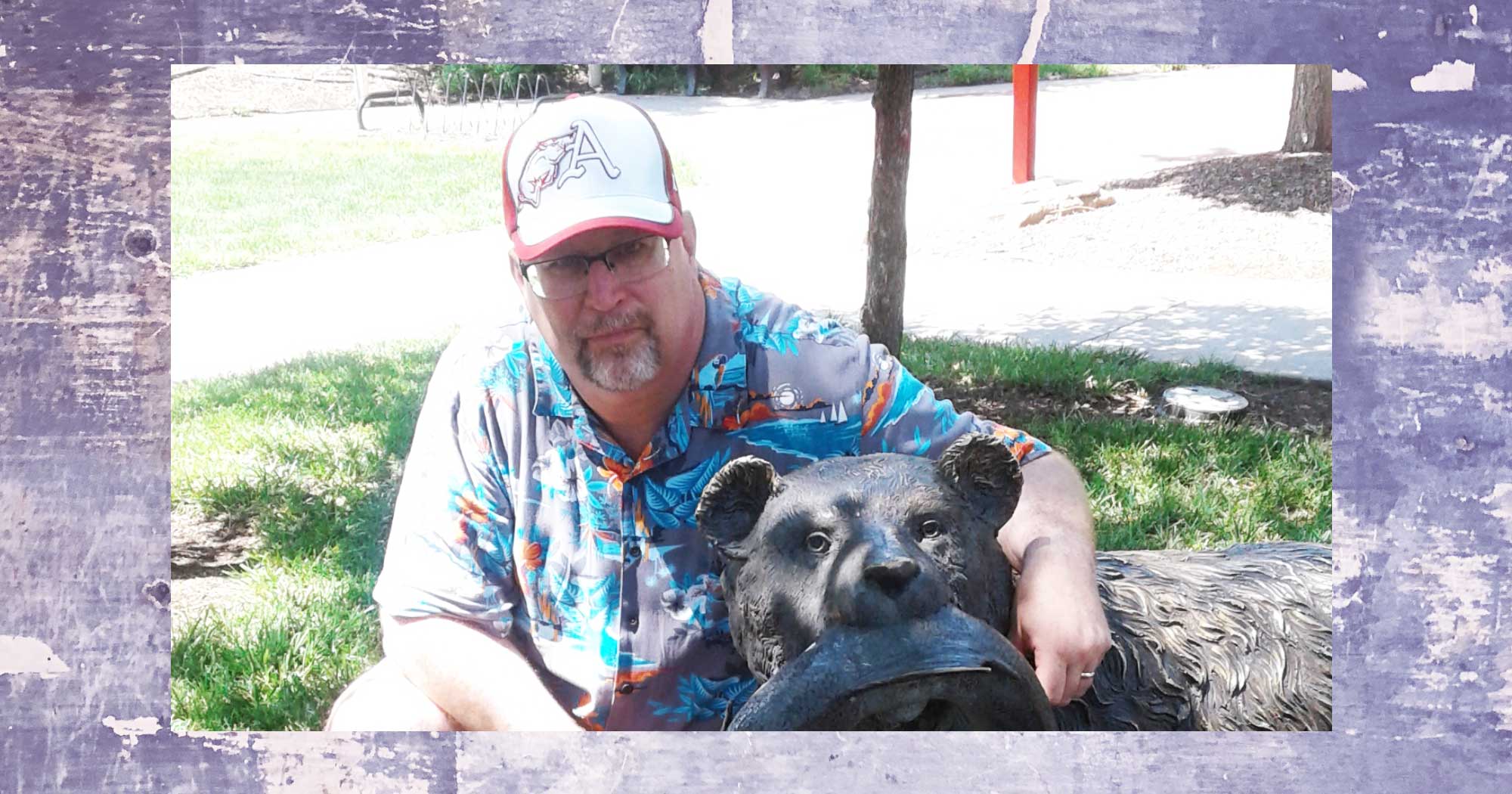 As the Limiter went down for the count, I got hit by a sucker punch. As I was falling, I heard a voice above me me yelling, “What is going on here?” I finally recognised The Distorter, another member of the Legion of Gloom.  I yelled back, “I put down the knife, Distorter. I may be a friendless failure in December of 1985, but I will not be a friendless failure my whole life! Take that!” The Distorter tries to make you look at problems as too big to conquer. To beat the Distorter, you have to learn to make smaller goals and whittle the problem down to size. It is like trying to finish a long endurance race. You don’t run a whole race at once. You just run a lot of short distances. I know this because I have finished two half marathons and a 35-mile bicycle race throughout my life. During the race, especially when I’m tired, I think, “can I at least run to that tree? Sure I can. Okay, can I make it to that car? Yes, I did it. Keep going. I’m doing fine. Yeah, Shawn!” and so on. You cannot beat the Distorter with one punch or kick. You have to outlast him. After many blows, I finally took Distorter out. 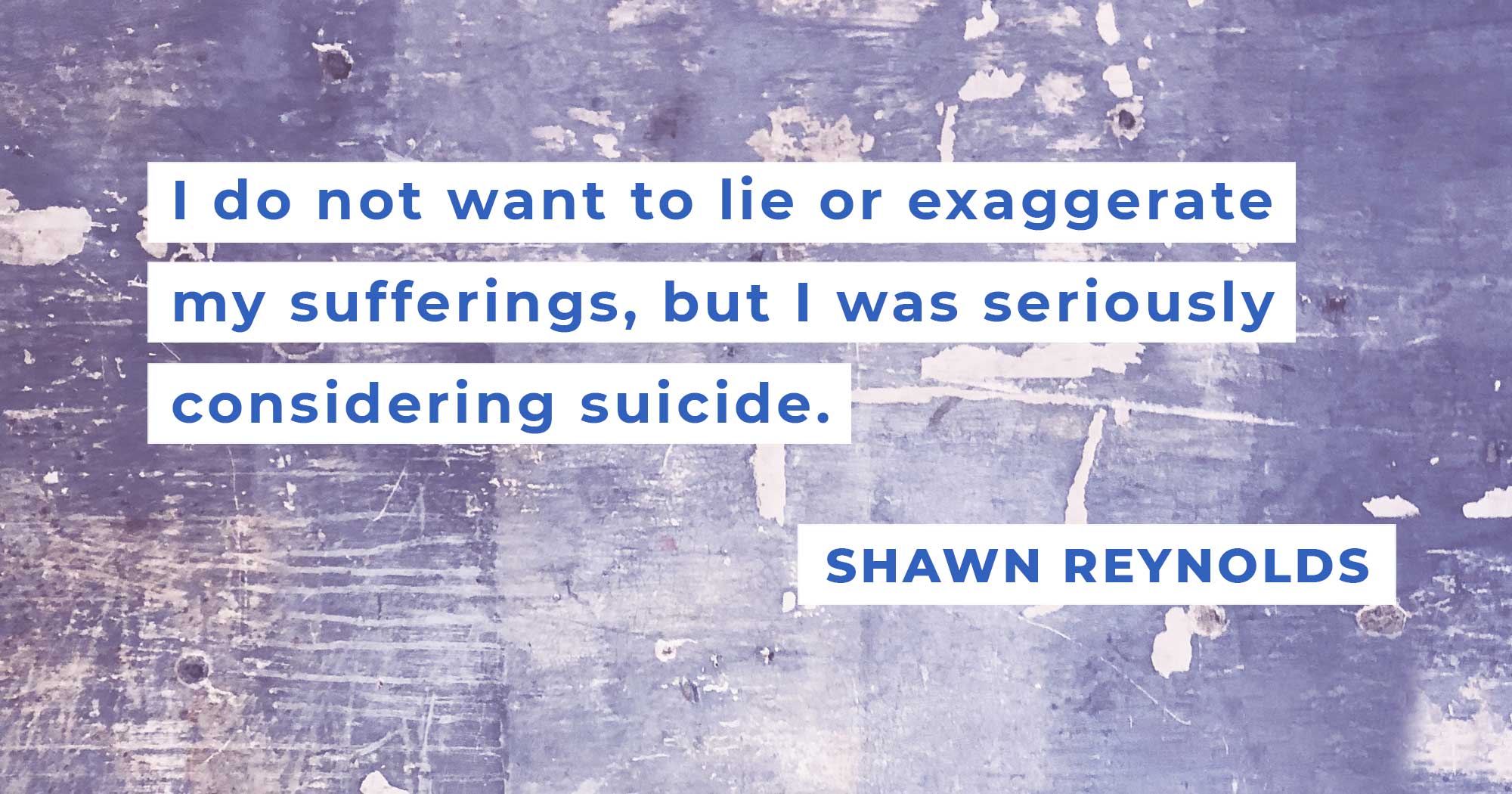 From the darkness, stepped one of the most evil beings I have ever known. His name is the Champion, and he plays a game of psychological King of the Hill.  “You seem to have pummeled the Distorter to death. Congratulations. You have finally achieved something.” I was breathing too hard to answer, so he continued to talk. “Your grades are worse than others; there are many people who are better musicians than you. In fact, there are many people who are better chess players, cyclists, and softball players than you. Look at your running. In that half marathon, you were the last place, dead last. Compared to others, you are a big loser, and you really should quit wasting everybody’s time.”

Champion always tries to get people to compare themselves to others. He gets his power from the belief in our country that if you are not the Champion you are not worth anything. Unlike in movies  where the heroes always win the championship, real life has few in first place. A more realistic goal would be work hard to be your best. Still tired from my fight with the Distorter, I looked at the Champion. With as much vehemence as I could muster, I said “I am. I am a cyclist. I am a chess player. I am a musician. I may be slow as a distance runner, but was the last FINISHER, not last place. People who don’t quit are all winners.”  With a sinister chuckle, the Champion held up what looked like a mirror. He said “But you are a quitter. Have a look.”

I realised it was not a mirror, but a picture frame. The picture was of another villain in the Legion of Gloom named Quitter. Quitter will keep saying “Quit” no matter how many times you answer “No.” You do not as much see quitter as you hear him. Perhaps he is a ghost. I looked at Champion, however, with a victorious smile and said, “Do you remember when I was the college badminton champion?” At the time, Quitter tried to tell me I would embarrass myself if I tried intramural badminton, and I should just quit.   I ignored him. I signed up for the tournament, showed up with some courage I had to find inside myself. Even though there were over thirty people who signed up, I was the only one who showed up. The university declared me Champion, took my picture for the athletic calendar, and gave me a free athletic dept. t-shirt. I smiled and said “Maybe I didn’t beat any other students, but I did beat someone. I beat Quitter.” Champion growled and disappeared into the darkness. 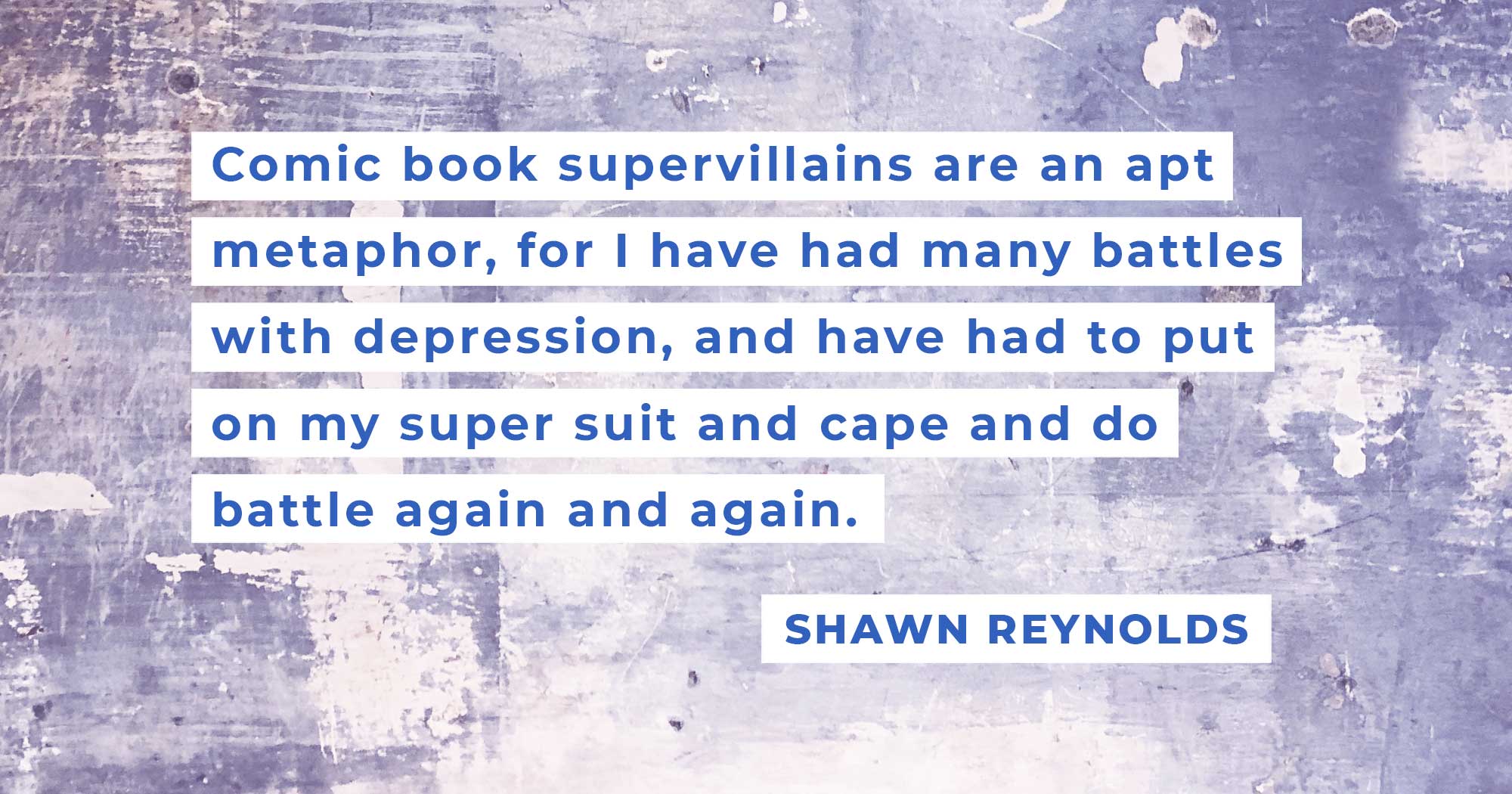 I had beaten every one of the Legion of Gloom except one. I still had to face the greatest of them all, Failure. Failure is the hardest hitter of the Legion of Gloom. A few years ago, he hit me with the fact I’m sterile. I cannot give my wife children, I cannot give my parents grandchildren and I am an only child. I will never experience going to a baseball game with my son, or a hug from my daughter. It hurts. He will keep hitting you in your most vulnerable spots. But no matter how hard he hits you, and no matter how many times he knocks you down, you have to get back up and keep fighting. He will keep saying, “Stay down! Stay down or I will hit you harder,” but don’t listen. That’s how you have to beat Failure.

Comic book supervillains are an apt metaphor, for I have had many battles with depression, and have had to put on my super suit and cape and do battle again and again. I may win this round, but I also know they will show up in next month’s issue with some new villainous plot against me. As you can probably guess, since I am still alive, I did put the knife down and did not attempt suicide. After fifty-one years of fighting I can say for certain that the Legion of Gloom can be beaten, although they must be beaten again and again and again. I have had times where it was so dark, I was unsure who would win this issue’s fight. But I look for more options to beat the Limiter, I look at problems as many small bits of many short distances to beat Distorter, I ignore Champion if I am not the best, I don’t listen to Quitter and I keep trying, and I get up and keep fighting no matter how many times Failure knocks me down. I may be battered and  bruised and bloodied from all this comic book SOCK, POW, and BAM, but the Legion of Gloom looks worse than me. 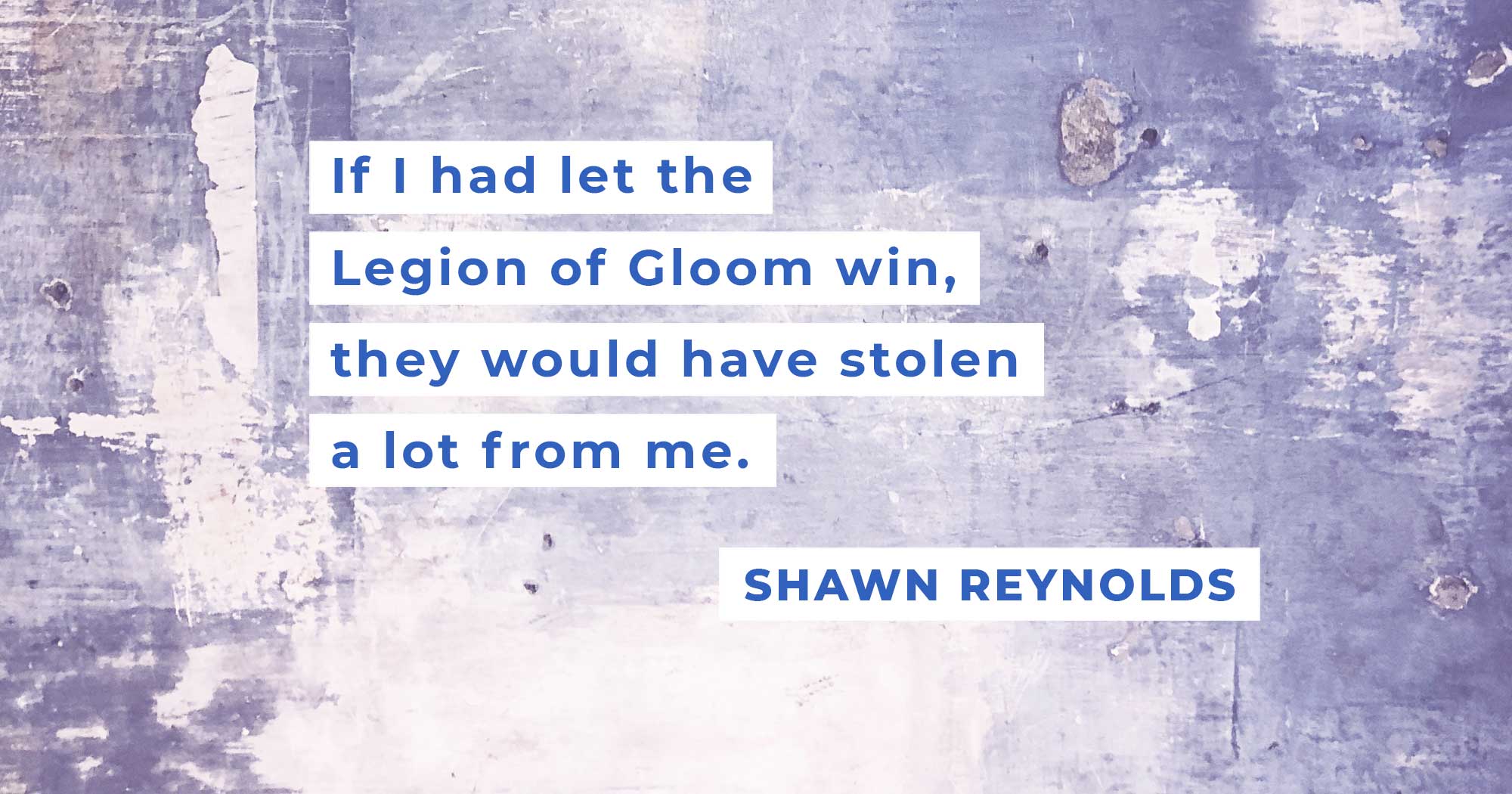 Last year I turned fifty years old. I thought back to my college age self and the moment I was ready to quit. Since college I have finished half marathons and long bicycle races. I have published some stories in magazines for money, and I play in a professional Irish folk band. I have directed bands and choirs performing great music, and I have shaken the hand of a Navy Admiral who thought my band played great. I have made lots of friends, got married to a wonderful woman, and have had a fun and interesting life. If I had let the Legion of Gloom win, they would have stolen a lot from me. Again, they can be beaten, and will need to be beaten again and again—Just pull on some colorful spandex, put on your mask, tie on your cape, and fight back. 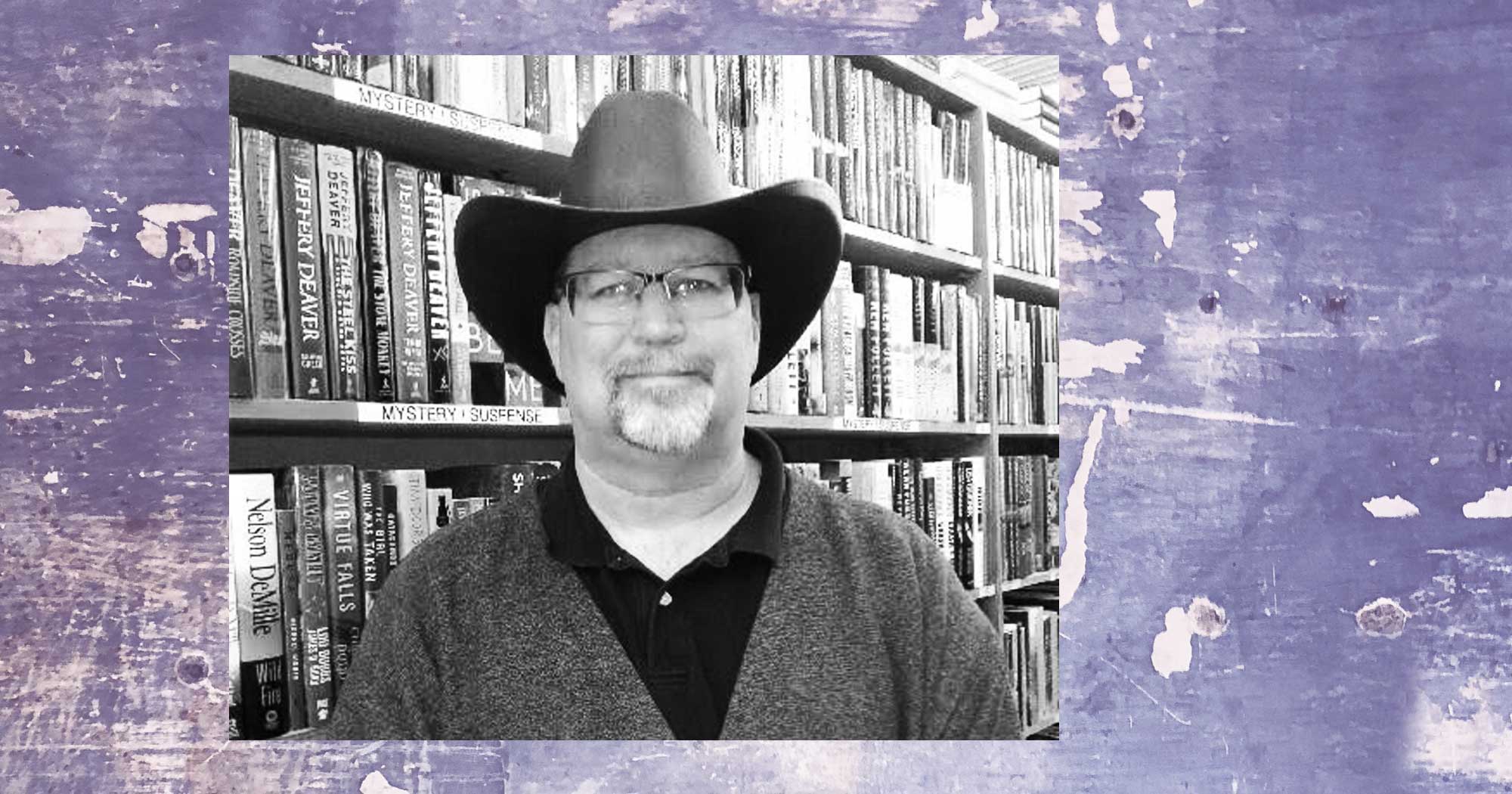 Shawn Reynolds currently works in retail management. He is also a writer, whose work has appeared in Cycle California, Australian Bird Keeper, and most recently in Ireland's Own Magazine. He also plays in an Irish folk band called Celtic Knot with his darling wife of twenty- two and a half years. His other hobbies include bicycling and chess. In the past, Shawn was a music teacher and taught at all levels, including as an adjunct professor at Northern Marianas College. He has directed school bands, orchestras, and choirs, and directed church choirs. Shawn also has coached youth sports, including baseball, basketball, soccer, cross country, and chess. He has participated in musical theater, barbershop choir, and other community music ensembles. An avid comic book fan, his favorite superheroes are Spiderman, Batman, Superman, and Underdog.

Rachael grew up with a feeling that she was different from others. She experienced anxiety, obsessive compulsive disorder symptoms and had regular meltdowns. Eventually these things turned into a problem with substance abuse. Her inability to adapt to change and childhood anxiety created a barrier, how Rachael's diagnosis of Asperger's Syndrome in adulthood helped her to understand her past and gain a newfound stability. Once, Rachael could understand what was going in her mind, she was able to take back control of her life. Read more about Rachael's story!