An Artist’s Struggle with Depression, Addiction, and Suicidality 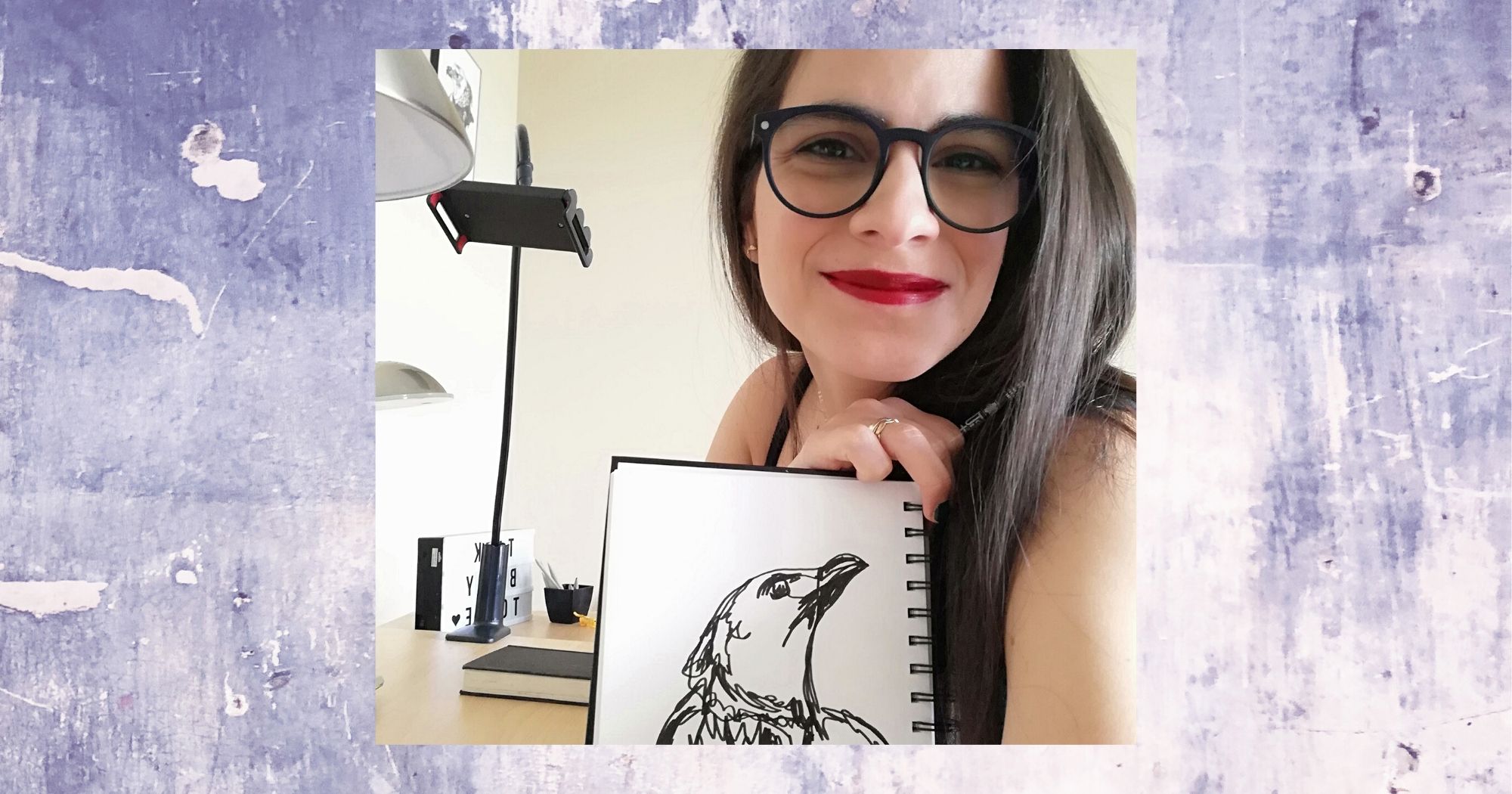 Letting Myself Go: An Artist’s Struggle with Depression, Addiction, and Suicidality

In December, 2013, immersed in major depression, I decided to end my time in this world. That process of letting myself go began little by little; I stopped eating frequently and, when I did eat, it was just baby food. I lost about 33 pounds which, for a small-statured person, is a lot. For me, when I wanted to die, I suffered from chronic pain in my joints, arms and legs, frequent fevers, headaches, vomiting, and muscle spasms. I was as weak as my will to live. My body was slowly shutting down and I had lost myself in that process.

I had a business trip that was scheduled months in advance and I could not say no, as much as I wanted to refuse it, and everything else around me. To my surprise, I had the best time there and I met interesting people. 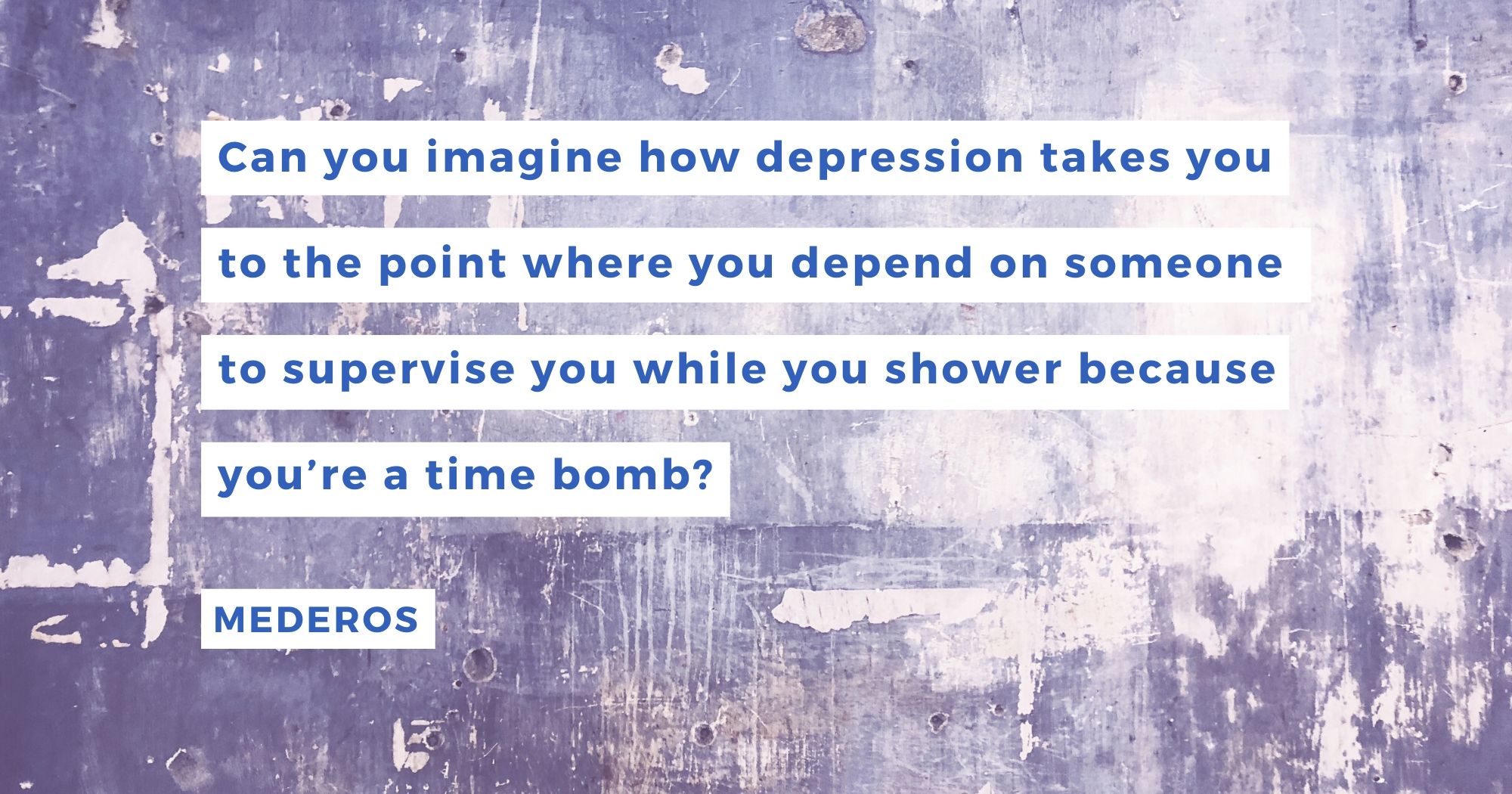 While I was on this trip, I learned my value as a human being. I discovered how much I missed my husband and my dogs. I found that I had a purpose. But while I realized my connectedness to others, that was not my purpose. The only purpose in my life is me and it will be only me, I’m the person whom I know better, I’m the person I’ve known the longest, I’m the person who can tell how my emotions are. It took me years to realize it, but everything in my life, despite depression, has found a balance and some happiness. And yet, the worst part wasn’t over, I got stuck in a rut of being stressed out for my well being, I didn’t have the tools to survive this.

Due to all my health problems, I had to take medication, and the pain from head to toe was unbearable. The neurologist sent me certain medication for the headaches and spasms, the rheumatologist prescribed physical therapy, injections, and painkillers, but none of that relieves the pain. Unfortunately, something else was about to happen, I started having seizures again. When I was an infant, I suffered from febrile seizures and as a teenager, I had an episode because of stress, but this time was different; my body had gotten to a point where I couldn’t even control my bladder.

Can you imagine how depression takes you to the point where you depend on someone to supervise you while you shower because you’re a time bomb and don’t know when you can have a seizure? Everyone around me was suffering as well, my husband got tongue cancer. It was a rough month, I had to get out of this “sick person” mode and help him to beat cancer and have a nice recovery. He did amazing; he’s cancer-free—no chemo or radiotherapy was necessary—but my mind and emotions were drained to the point where I collapsed again, had all the seizures, crying, pain and no control of myself. Each time I started feeling the pain, I swallowed a pill, that didn’t make me feel better, so the next hour, I took another, plus, the other handful of medication for the rest of my aching. I was immersed in pills, trying to fill the void without realizing I was taking too many painkillers an hour.

My life kept going like that until I grabbed a brush and started painting again. I used to draw and paint when I was growing up, but life happened I stopped doing it. From the moment I reconciled with art, everything changed. I was getting my wings back, I was about to free myself from depression and find a way to heal. Since then, I haven’t put the brush down and got even the courage to ask for help; my sessions with my psychiatrist began. 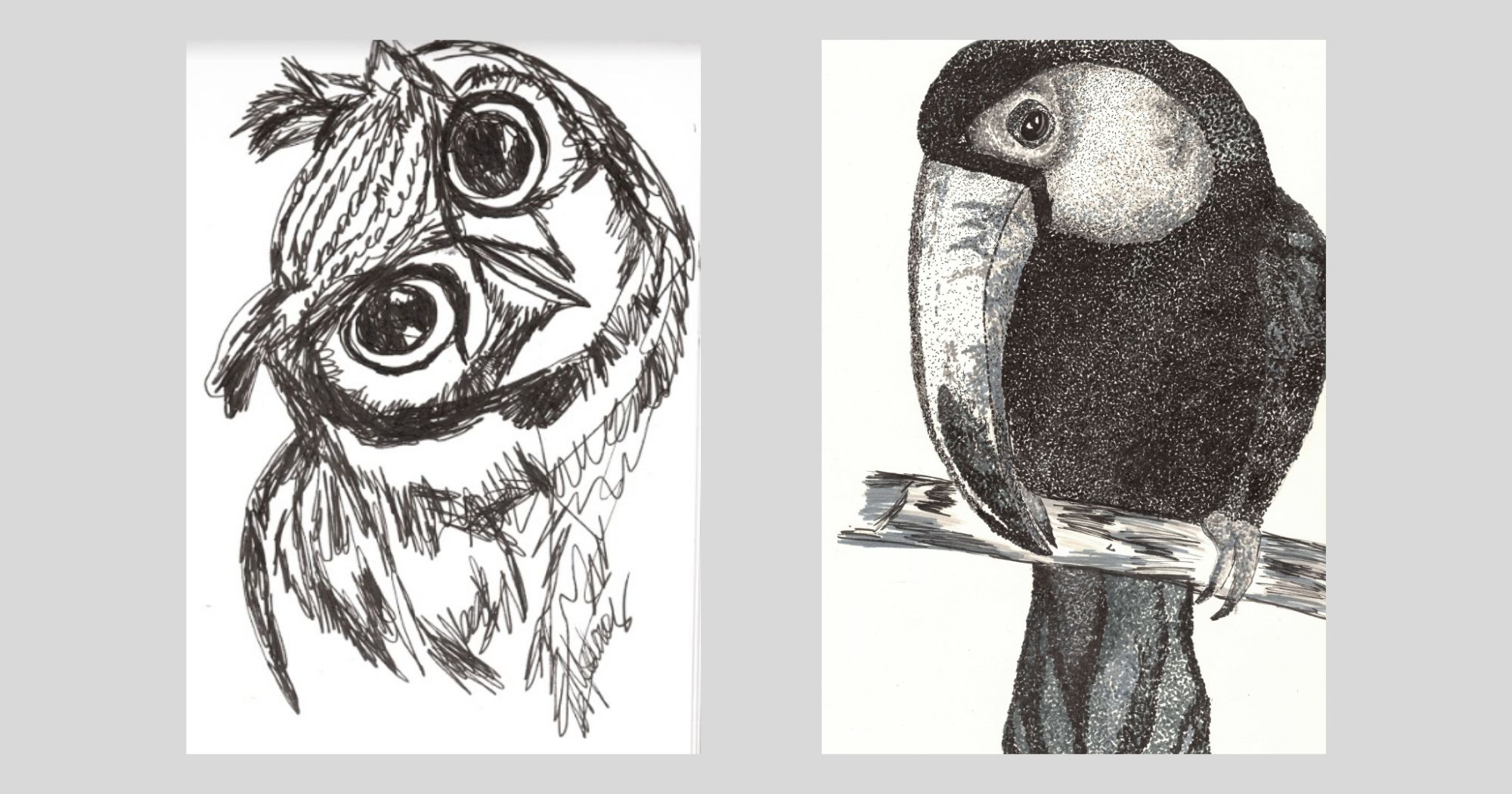 Going to therapy was the best thing that has ever happened to me, my past, my present and my future were healing. And yet, I haven’t told my psychiatrist what was happening with the number of pills I was taken until one day I couldn’t take it anymore, I told what I was hiding to him: I’m taking too many pills a day. My treatment takes a new direction, no pain killers and more medication for depression, mood swings, rage attacks and all the crying.

Getting sober was rough. I remember one day I went from being calm painting at studio from being a complete maniac who decided to break the windows with her bare hands to find something to cut herself and end the suffering, the misery of getting sober. Or I could simply have a seizure and, when “conscious”, lose my sanity completely to the point where my husband, suffering and hoping for a miracle, would have to save me. 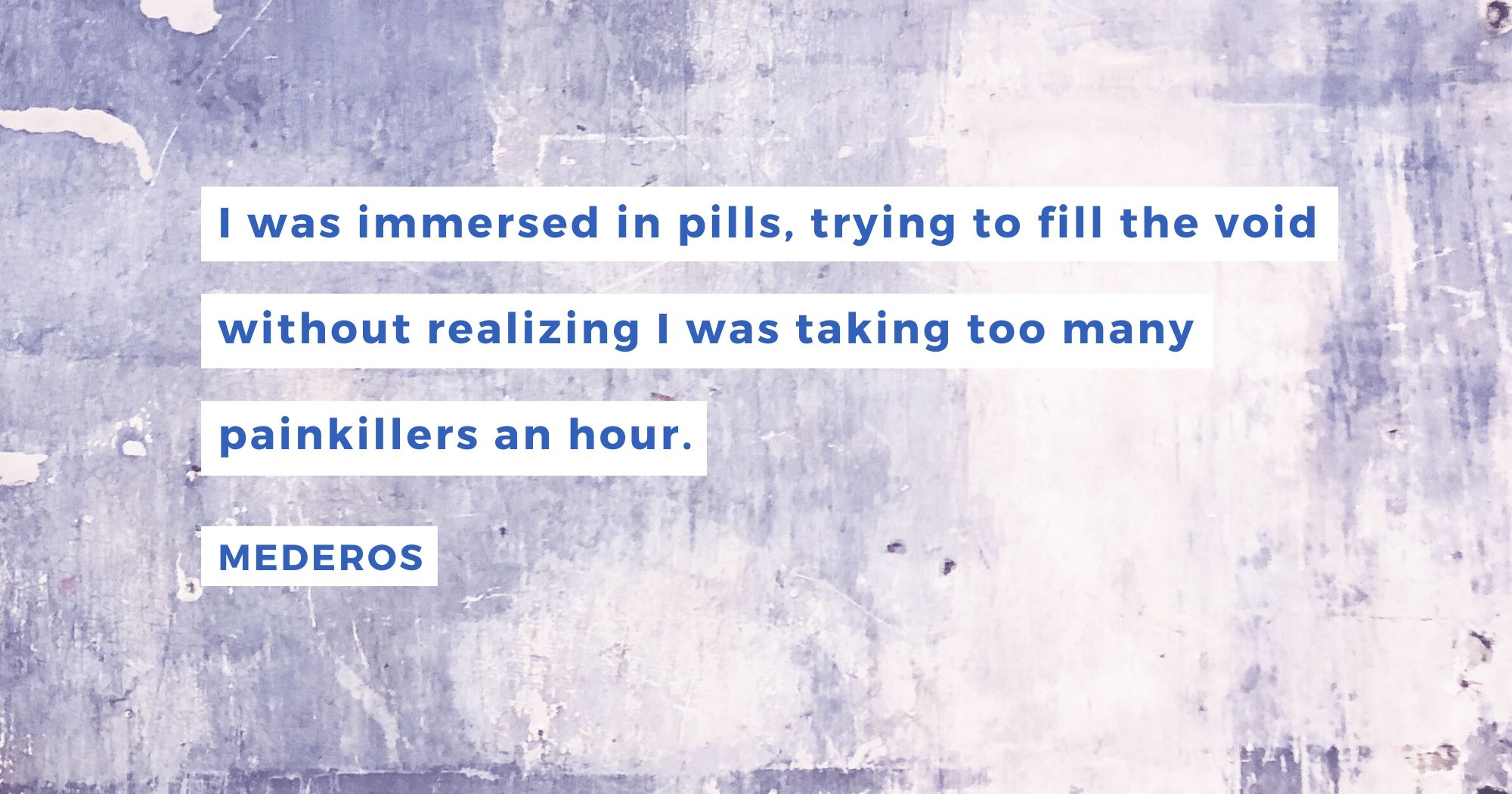 I remember the day I almost lost it again; after sixteen straight hours of headache.

On March 15th at 2:00 pm my headache started, I did not have the strength to tell my husband that I was in pain so he wouldn’t worry. I needed to stay silent, keep the aching thoughts in my head, he has suffered enough. That afternoon I had a mild, though exhausting, crisis and my body had gotten stiff. I had no facial expressions, my brain shut down leaving me unconscious for a few seconds, my heart was sore. Also, so was his.

Depression kicks in and I have no choice other than to welcome my friend back to my life once again. We belong together. We are forever friends; I know she is not good for me, but we have coexisted since I was a little girl with a challenging childhood and an abusive mom.

It wasn’t a simple headache. It was blurring my sight, my happiness, my body, extending the pain to every cell, every muscle, every inch of my being. Many ideas come to my already congested mind, one of them was to end my life and forever be pain-free. I thought about taking some painkillers, but I wasn’t able to do it. I suppose my willpower and my primary need to stay sober were stronger than the painkillers. I knew that if I took a single pill, it could have gotten from 1 every 6 hours to 4 pills per hour, as I used to do. 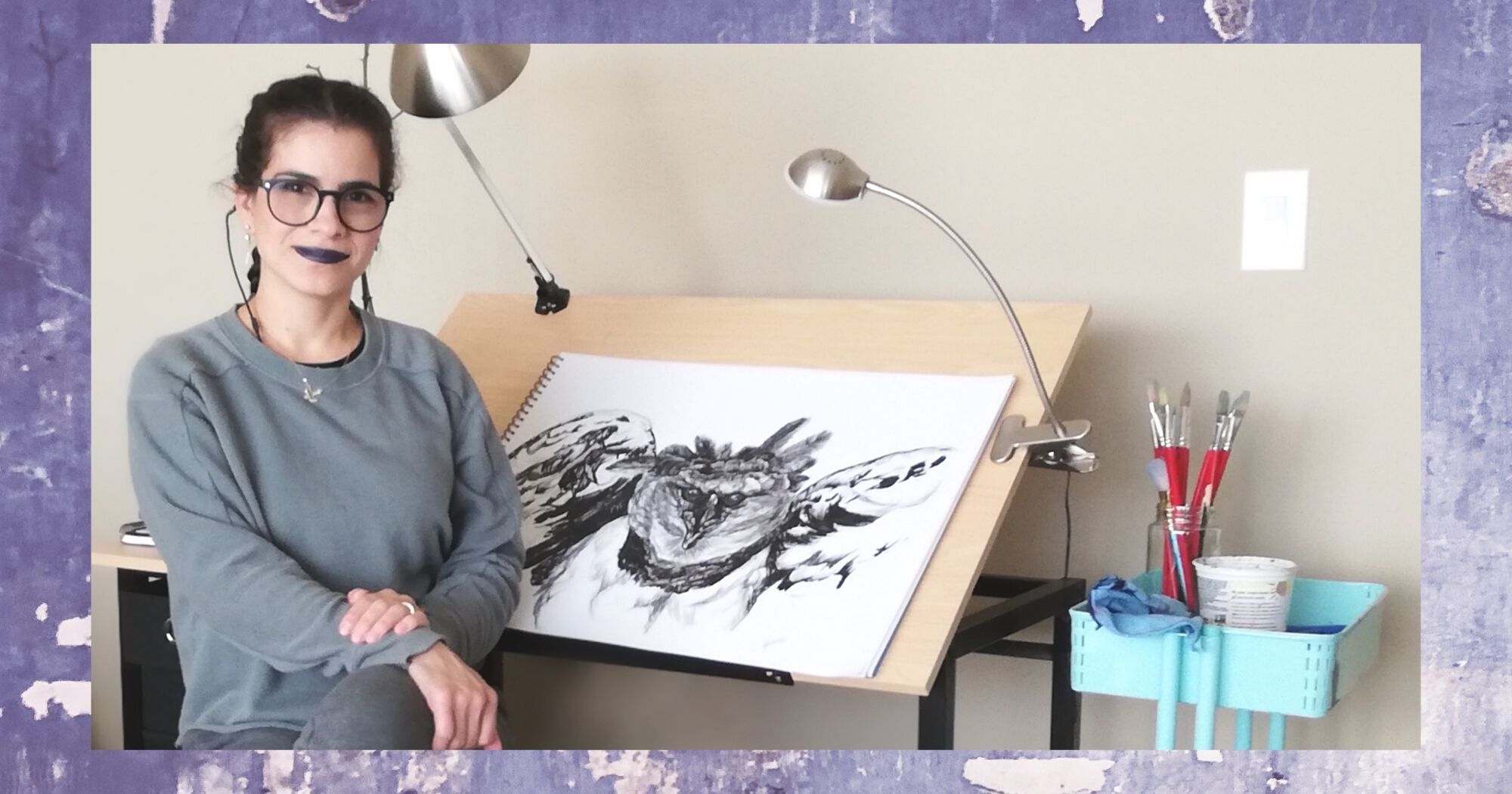 It’s 2:00 am and I’m still in pain, it’s been 12 hours with this suffering. How I was able to cope with so much agony? I suppose there are worse things you can go through but, at that moment, there is only one thing: my headache.

Since I didn’t have a wide range of positions while lying in bed, so I decide to turn on my left side, I was tired of staring at the wall for hours now. Suddenly, my eyes were contemplating the most beautiful sight in the world. There he was, submerged in a deep sleep; relaxed and serene, he was so peaceful lying in bed with me that all negative thoughts have vanished before the feel of his skin, his smooth soft skin and his hair on the grayscale. I got lost watching him sleeping. 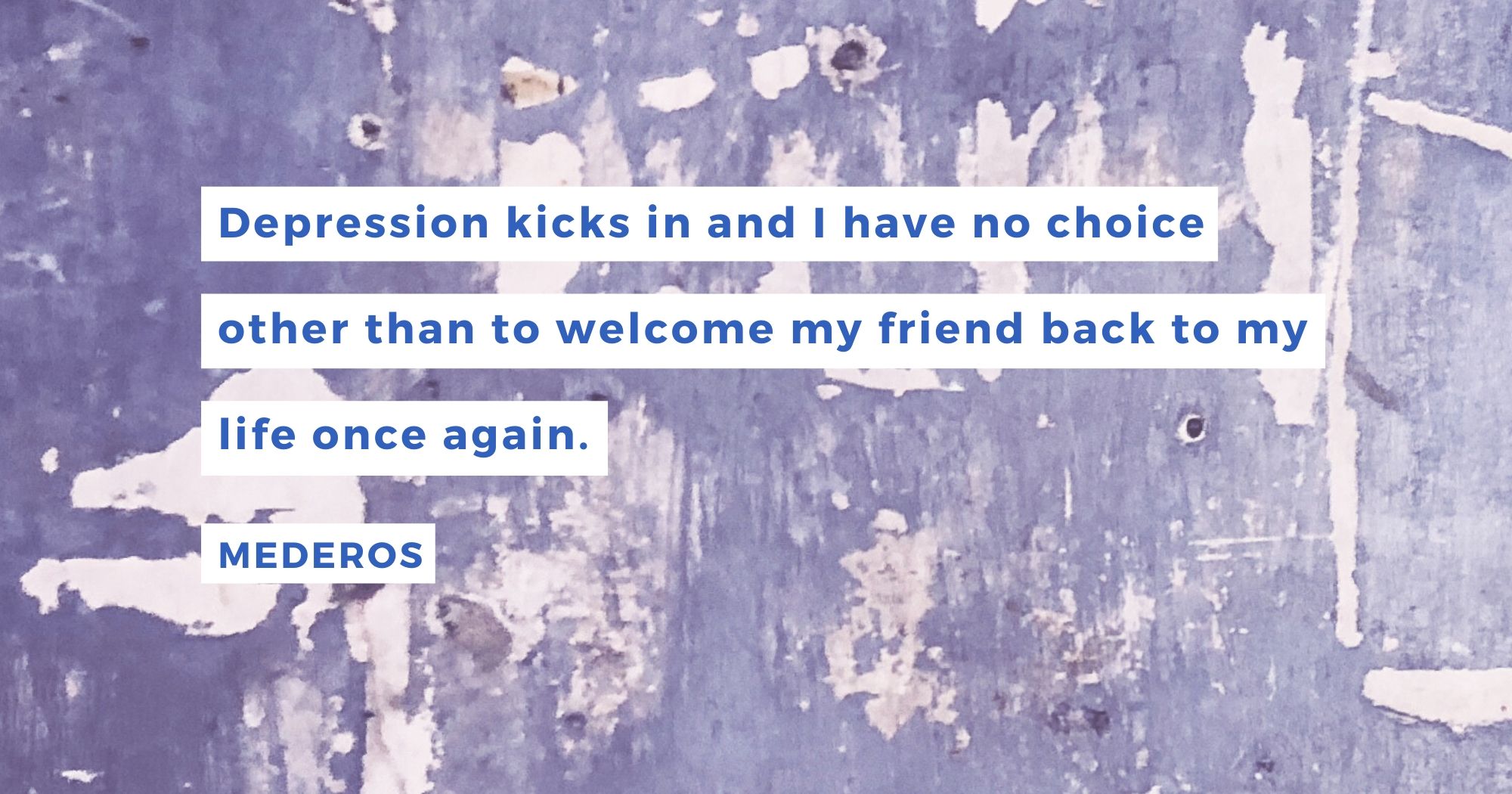 I was running out of time. I woke him up and told him what was happening to me. I felt his reaction through the darkroom… his eyes leapt, his pupils dilated, concern overtook his body. And what does my hero do to save me from the curse? Takes my hand and gently touch it until I fall asleep and the pain is diluted like water between his fingers. His love heals, his love nurtures, his love fills me with happiness. It was exciting to be able to wake up at 6:00 am and see his freckles covering his body and those magnificent brown eyes brighten up his face.

He is my hero and always will be. He is the only one capable of saving me from my worst enemy; me.

The next morning, I draw how I felt in those 16 hours of pain, with drawing; Mederos had found a way to show her pain.

I’m grateful for that day; despite all the pain I managed to survive and express it through art. Since then, art has been the best companion for therapy and it was shown in every painting and drawing I make. 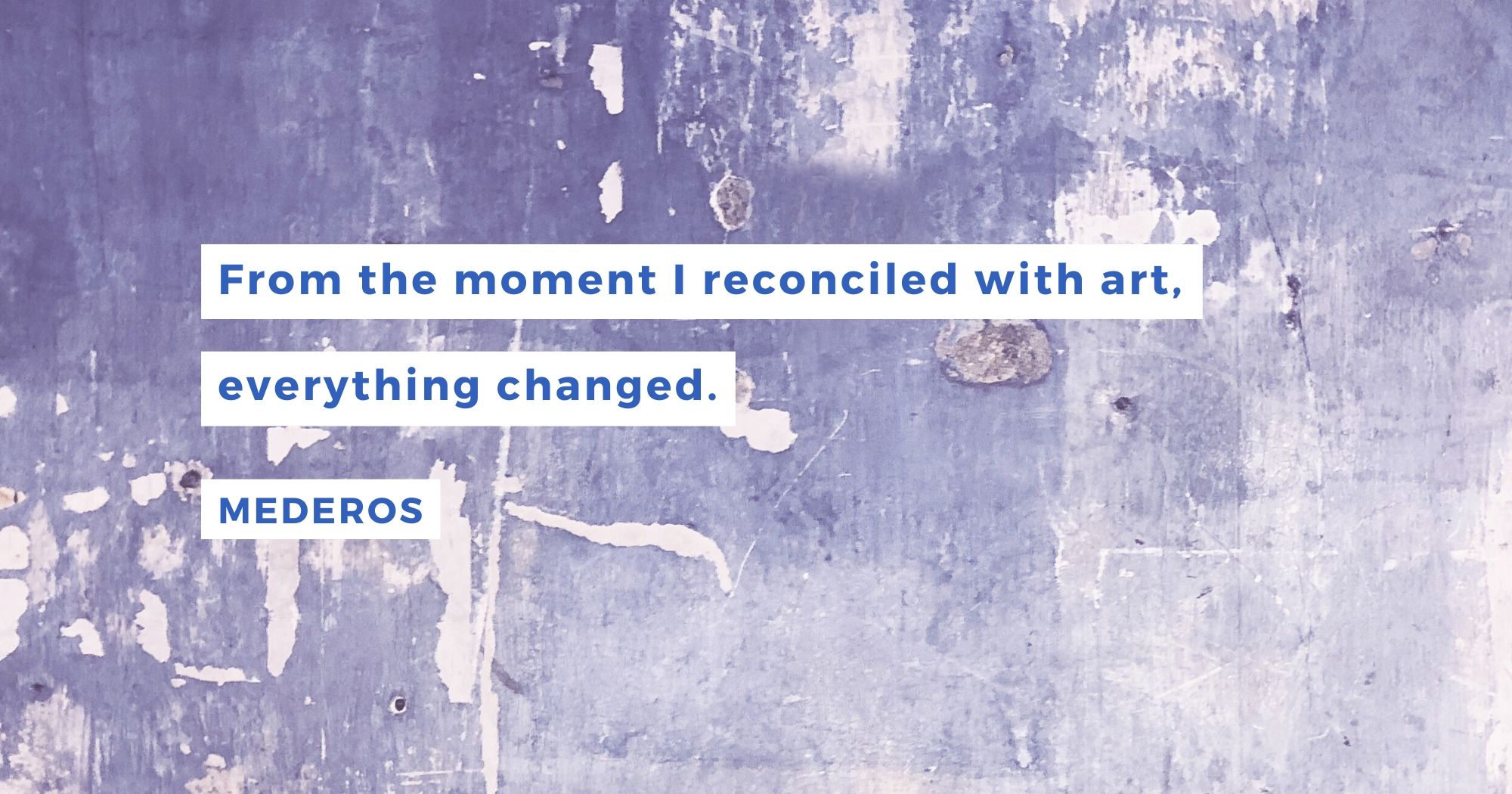 My most beloved piece is a projection of me as a raven nesting a bunch of antidepressant pills, feeling proud of being a person with mental illness.

When I owned that painting, my life changed for the better. No more eating disorders, no more depression, no more pills. I kept myself expressing my emotions and healing through my art.

I know you are asking; why a raven? Here’s my answer: birds are a representation of me and my emotions. Birds represent, in their different species, freedom, triumph, balance, elegance, and mystery. These are the characteristics that I try to transmit through my artwork. 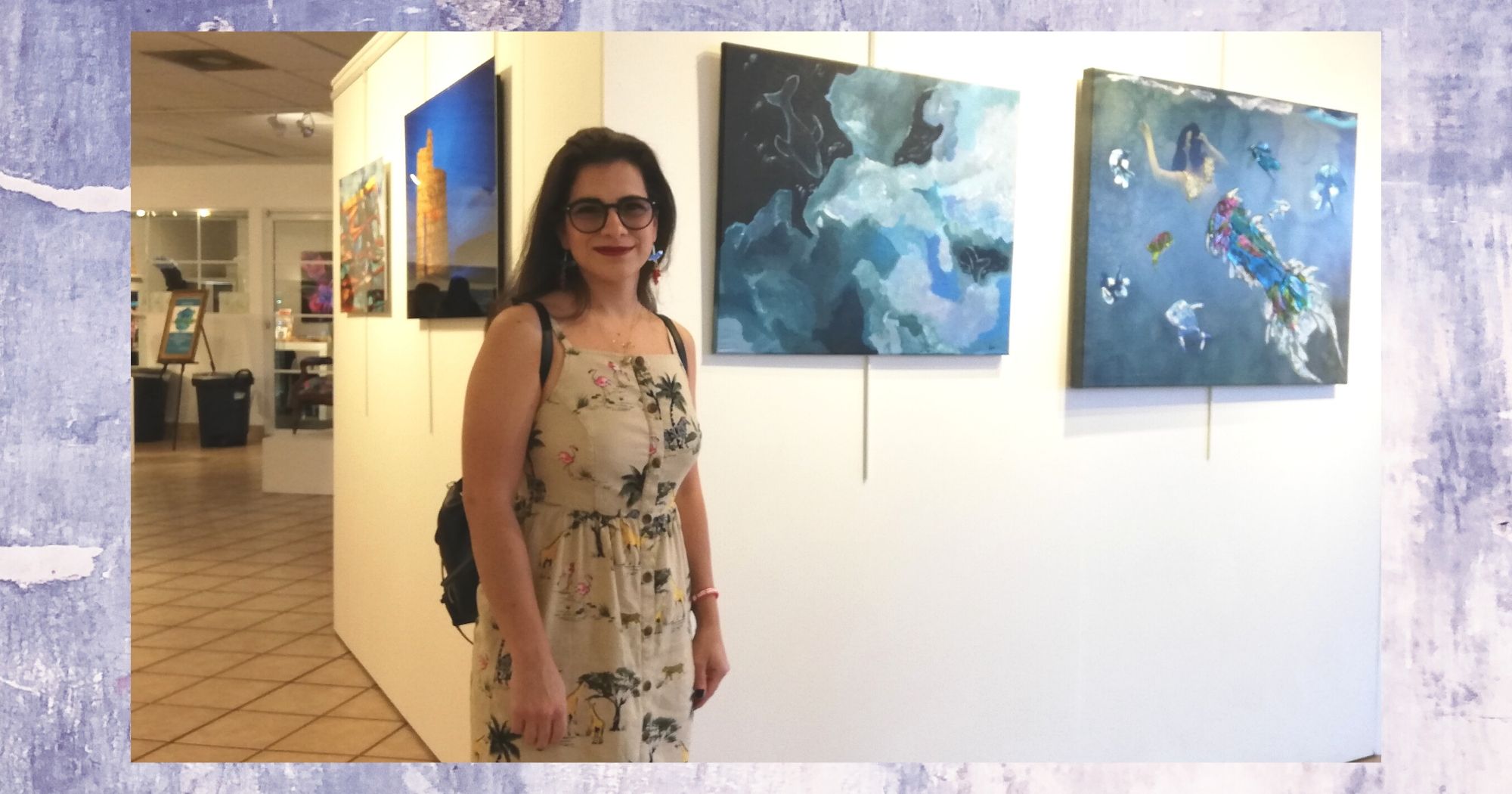 My achromatic (black and white) drawings emanate from a lack of color representing that balance, that elegance, and that mystery. On the other hand, my paintings are chromatic because I understand that the different tonalities of colors represent an explosion of feelings and emotions that can only be reflected using the chromatic circle.

I don’t feel the need to go back to those days where I popped pills like Tic-Tacs; I have my own safe place now—my studio. Whenever I’m there, I grab a pen and let my hand do whatever my mind needs to let go. My life is not completely full of joy and happiness, and I wouldn’t want it like that. I prefer a more realistic way of living—going through my day feeling every emotion I can feel. It can be overwhelming sometimes, but it is the healthiest way of living and it works for me.

Mederos is an artist from Caracas, Venezuela, who is passionate about birds. Her drawings and paintings became the perfect complement to overcome suffering and pain. Her artwork can be found on Instagram: @mederosart or on Etsy.